The typical layout of a Newspaper comic strip is tightly controlled to remain consistent.  So if another strip such decides to be more innovative in their layout, it means having to reshuffle the other strips to make room for the temporary widescreen comic that otherwise wouldn't normally fit. 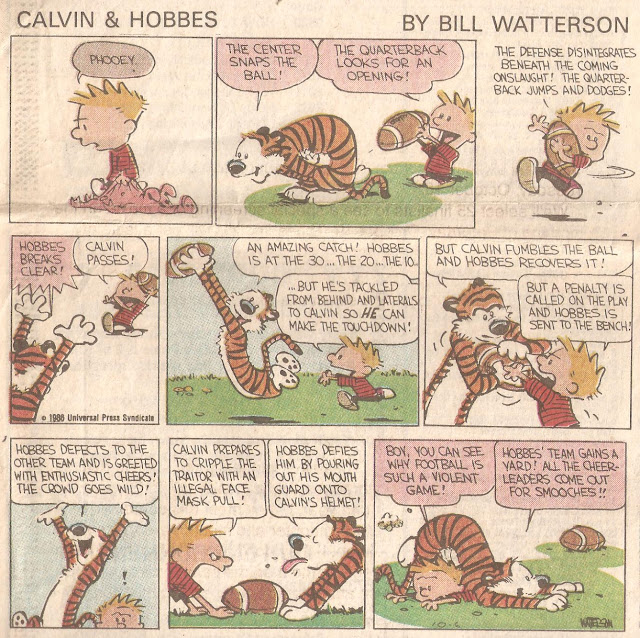 For the above, readers were fortunate that Calvin was going into reruns, so anybody who were long-time fans would already know the setup to the joke on the first panel.  But new readers wouldn't be as lucky.  I've posted before how in the process of rearranging panels, some may be put out of sequence from people who aren't aware that some are being put in the wrong place. 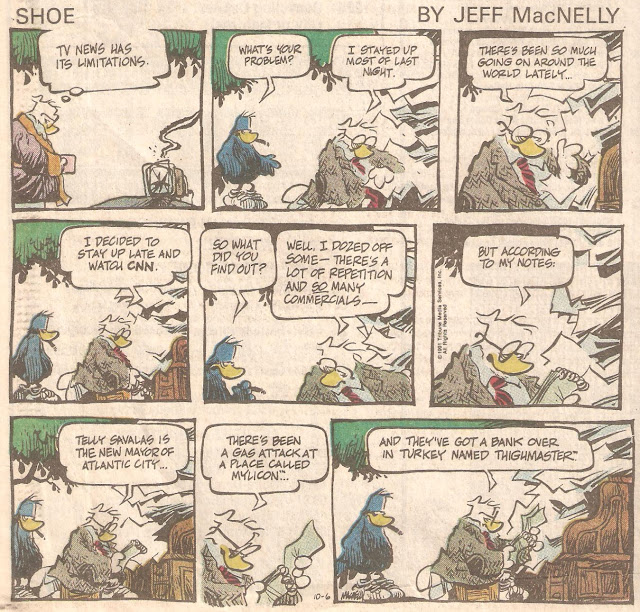 Sometimes in the process of moving things around, there's the danger of putting panels out of order.  But another unintended consequence is the throwaway panels being affected as well.  When this happens, this can sometimes result in removing the title logo, but not the throwaway panel that accompanies it, resulting in setups with no punchlines, or punchlines with no setup. 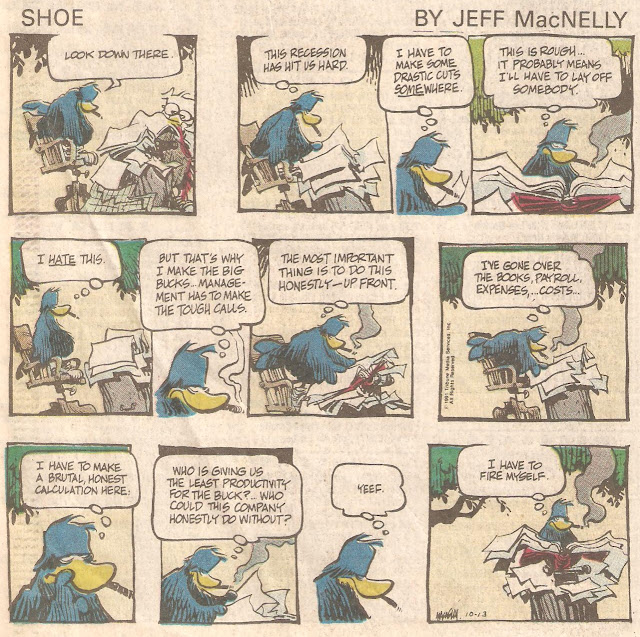 So much of the newspaper comic page depends on the strips remaining static.  So when one strip decides to get creative or attack certain controversial issues that don't meet with the paper's fragile sensibilities, some rapid shuffling may be in order.  Such was what happened around October 1991, when Doonesbury was under danger of a hostile takeover by the more flamboyant side characters.  In the process, some panels wound up being lost.  Normally here, you'd see Michael being all jovial with April before scowling after being ordered around by his mother. 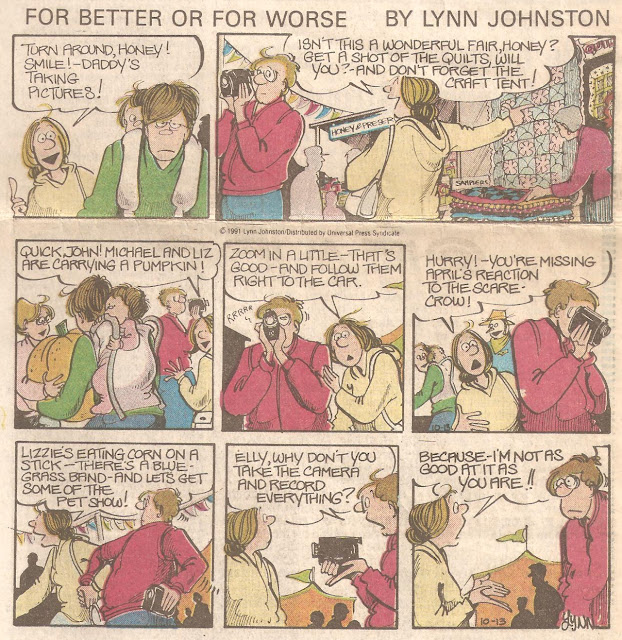 In other instances, the paper may have the option of having two throwaway panels, but only opt for one of them.  For the longest time, I only had one Doonesbury throwaway panel to deal with, and in most cases, you could pretty much figure out what was going on.  One panel or the other would just reinforce a notion that would be emphasized again.

The problem would be when both panels were needed to make the joke work, and oftentimes, I would be completely baffled as to what was happening here.  Also, sometimes the second panel would be chosen instead of the first.  it wasn't always consistent.  The red bar surrounding the panel is what I saw in the paper.  The remainder on the other side is the rest of the comic, and wouldn't find out what they were years later.

The biggest sufferer of this system is Beetle Bailey, who happens to have not one, not two, but three throwaway panels.  A small one under the title logo, and two extra ones. 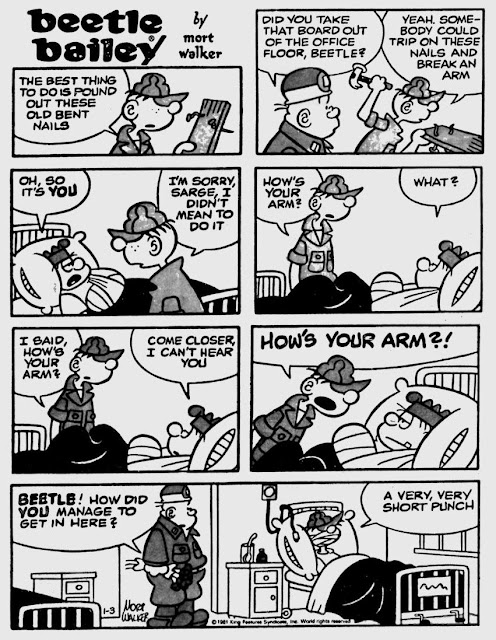 While scouring newspaper archives, I came across a particularly noteworthy example.  The above strip has the typical throwaway panels for the setup that suddenly and inexplicably jumps straight to an aftermath scene with no clue to what prompted the change.  With the missing panel in place, the sequence of events begins to make much more sense.  I can only guess at the level of frustration that readers had in trying to understand what was going on here. 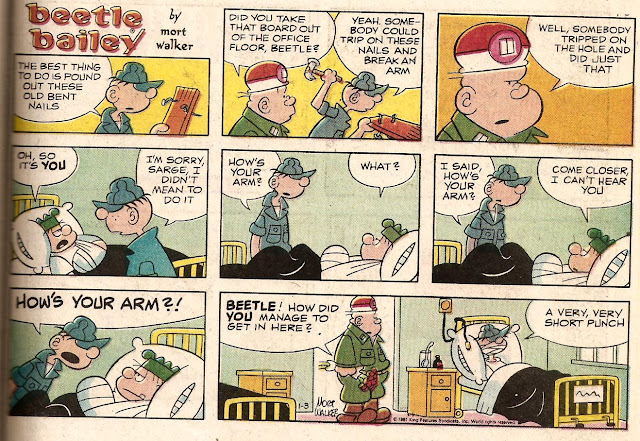 Strangely enough, in Sunday collections of Beetle Bailey, the title panel was removed, presumably because it was smaller than the others.  Which ties into another pet peeve of mine - collections that don't have the necessary throwaway panels.  You'd think that with the extra space, they could afford to show them, but no, they just revert back to the same old format. 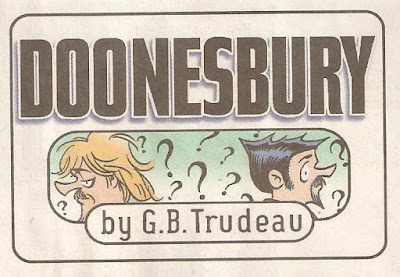 Going back to Doonesbury, the latest Sunday strips have had the title panel have an additional header added to them to further emphasize the content of the comic.  For the most case, these are simply closeups of a character's face, being somewhat nothing special.  But in some instances, the extra panel adds a distinctive flavor to an otherwise regular comic. 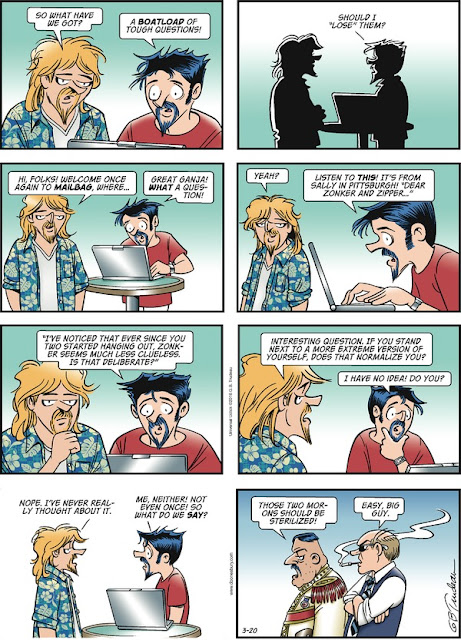 My favorite so far is the logo for the latest Doonesbury comic which had the rare instance of making me laugh out loud from the reaction shots of even the most vocally opinionated people. 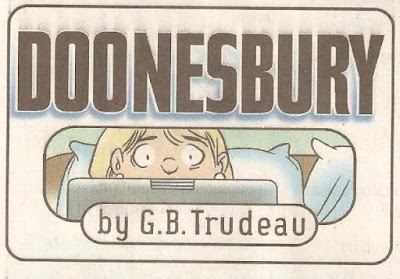 Sadly, it seems that save for a few instances, the majority of the latest Doonesbury online archives don't bother showing any Sunday logos.  Apparently, you need a newspaper subscription for that.  Which surely must be a resounding selling point among the very very specific target market. 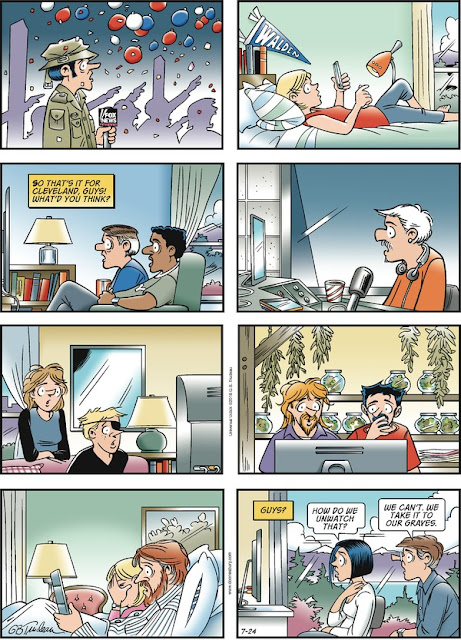 Another minus is that despite Doonesbury being available online for new readers to play catch-up, the early Sunday comics are at a reduced size, marginalized, tiny and practically unreadable, due to the small print.

Of particular notice are the Garfield reprints.  Back when Garfield made its debut, it gained recognition by reprinting virtually every single comic and doing so in a wide strip format, rather than breaking the panels up into a typical book format.  (Which could lend itself to previously mentioned accidental panel placement or unnecessary cropping or rotation of some strips)  Since it was just starting out, the early Sunday strips had no throwaway panels, save for the ones on the sides.  If there were any, they were likely the static ones, that were a compilation of the main cast, until Lyman disappeared.

That changed around March 14th, 1982 with the introduction of a new short-term singular panel before reverting back to the widescreen panel two weeks later.  The difference was, the single panel that was just the main cast, changed to an additional throwaway panel.

So what's the problem?  Well, the online archive has every Sunday comic printed.  But the books have the exact same layout used since it was first released years ago!  They've been coloured and resized to accommodate more space, but they don't make effective use of that extra space!

One last historical oddity - daily newspaper strips don't have the benefit of having a title logo, so their names are place either from the top or to the side.  But Doonesbury apparently had a throwaway title panel logo of its own.

Was there a time when daily comic strips had their own title logos?  I haven't found anything to support this, but it'd be nice to know if that was true.
Posted by DeBT at 8:55 PM