Newspaper carrying comics have been a customer staple ever since the dawn of the 20th Century, save for those that only contain wordy articles, and appeal to the intellectual few who don't need to rely on pictures for their daily input of information.  They fall on the respectable field of journalism who don't want to rely on advertisers dictating terms for which articles are worthy of being printed or not. 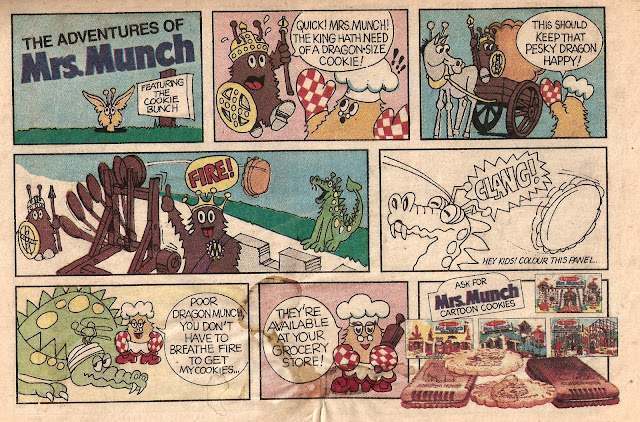 So it's somewhat surprising that usage of comics for ads isn't utilized more.  There was a short-lived run of YTV comics that would've fit right in TV Guide. This kind of thing would be expected in regular comic books, but even there, usage is sporadic.
For the most part, they're fairly functionary, in setting up a conflict in the lack of a need, and a quick-fix solution in the way of a reliable source where retail outlets are sold.
For years, I braved my way through shows without close-captioning by making up my own dialogue from what I imagined was going on, with small clues gleamed from surrounding elements, situations and gestures here and there.  If I'd actually known what the Hanna-Barbara characters were actually saying, I would've lost all interest in limited stilted animation.  If this level of dialogue is typical of an episode, it's no wonder that Anime's been looked down as children's entertainment for so long. 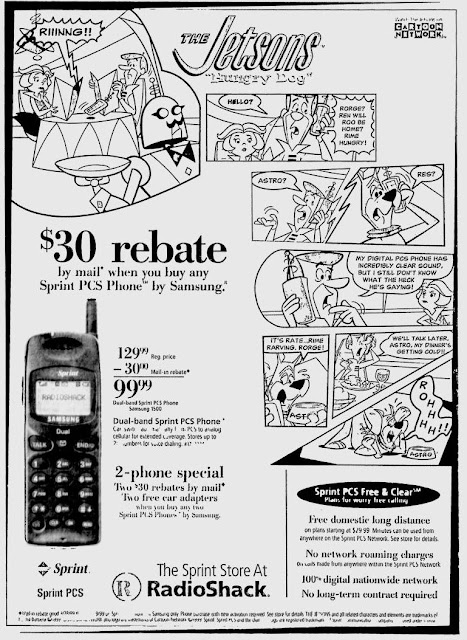 Some ads look like were basically retreads of the 30-second commercials that were aired and then quickly forgotten.  They probably still exist somewhere in some obscure videotape or Youtube account. 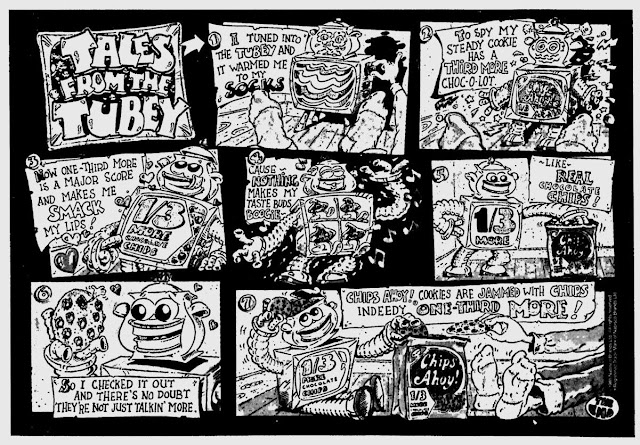 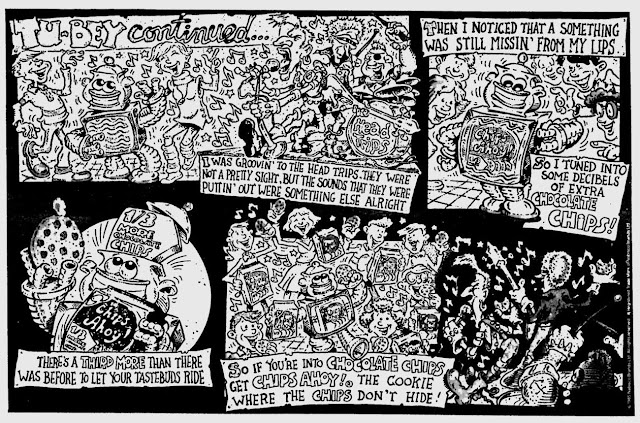 One of the greatest surprises was finding a Mr. Peanut comic that looks like Robert Crumb drew it. 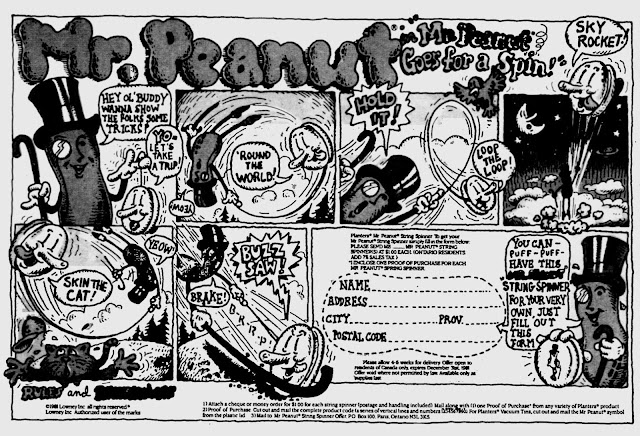 For those not in the know, Lowney are a kind of peanut butter chocolate, not unlike Reese's Pieces.  Their more recognized brand are those lumps with the cherry inside.  It should be mentioned that they're Canadian as well.  If there's a fault with the first ad, it's in the second panel, which has a caption just below some written text that's continued on the caption on the next panel.  Chances are, most readers wanting to ignore the boring picture, feeling it redundant, would read the narrative as "I've been writing to them for over a year... upside Down!"  Obviously, any company that would pay attention to such an unusual letter would want to ignore such madness, right? 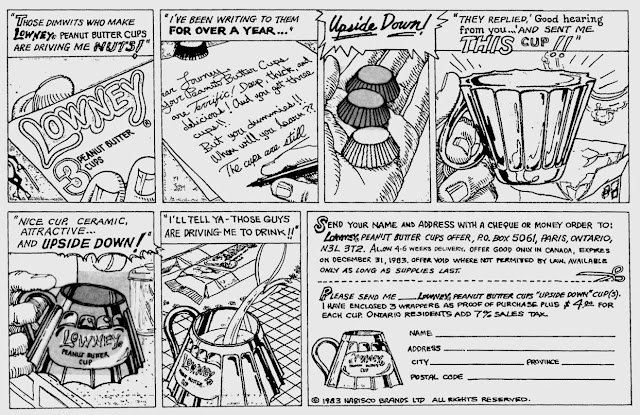 And yes, this was an actual item, though its presentation could've used some work.  It's coffee colouring and small opening makes it look rather unappealing for all but the brand-faithful and nostalgia-induced. 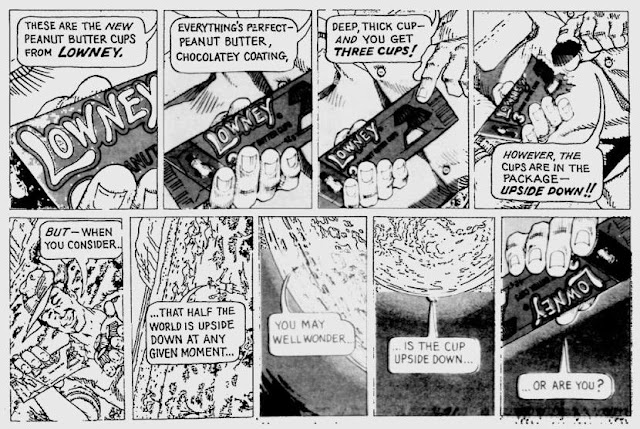 Things get downright disturbing with the 3rd ad with the limerick-like introduction of a girl whose personality is as unhinged as her jaw. 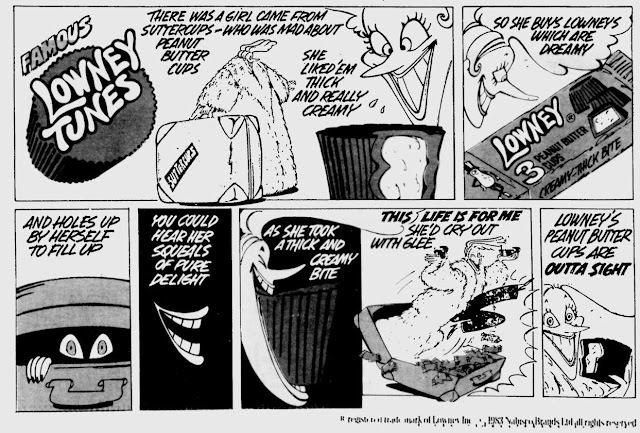 Going further with Canadian chocolates is the series of Eat-More bars, which all seem to follow some kind of Western theme. 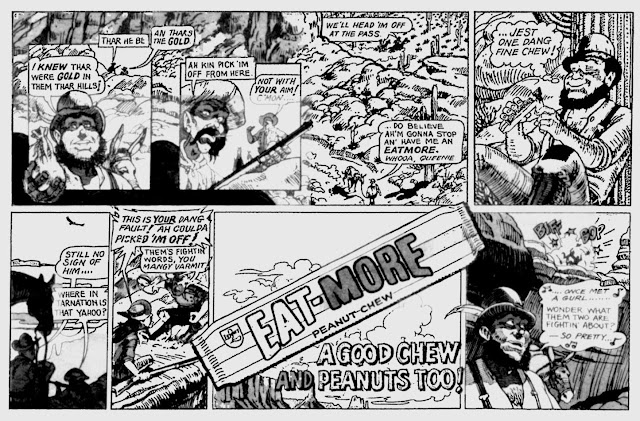 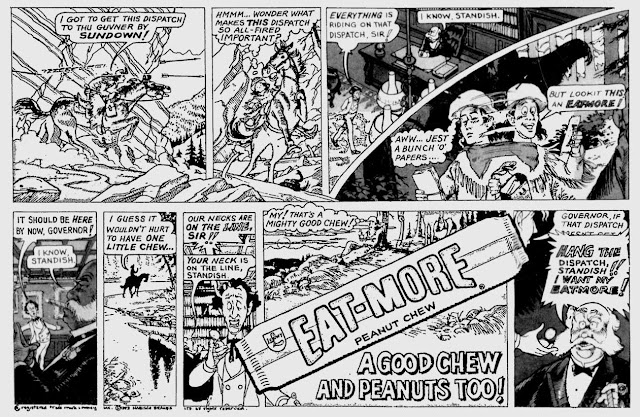 For some reason, some of them remind me of MAD's Scenes we'd like to See, where a bunch of charming underdog Cowboys are struggling to hold out against a horde of invading Indians find themselves overwhelmed in the face of a cavalry that never comes. 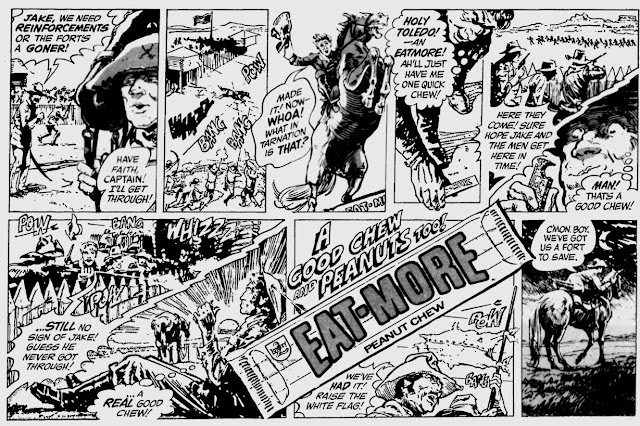 It's certainly an unusual sentiment, given that ads are all about making you feel better about yourself, and less about selling products that carry the whiff of failure.  But that's always been more of a Canadian mentality than an American one - doing the best we can against incredible odds, and wind up losing in the end.  Terry Fox is revered, even though he barely reached the 1/3rd mark in his marathon.  Dieppe was our greatest failure that was a prelude to the D-Day invasion on Normandy Beach. 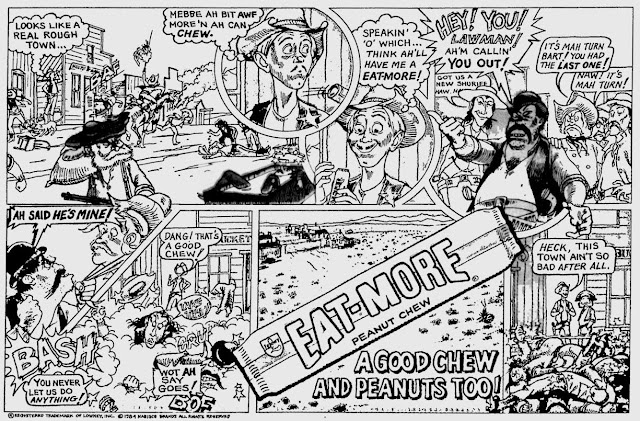 On another vein of the creative scale are Oh Henry! ads in the form of parodic Believe it or Not! factoids.  All of them feature an oversized Candy Bar, which was how they were portrayed on TV, not unlike the Three Musketeers candy bar comics later on. 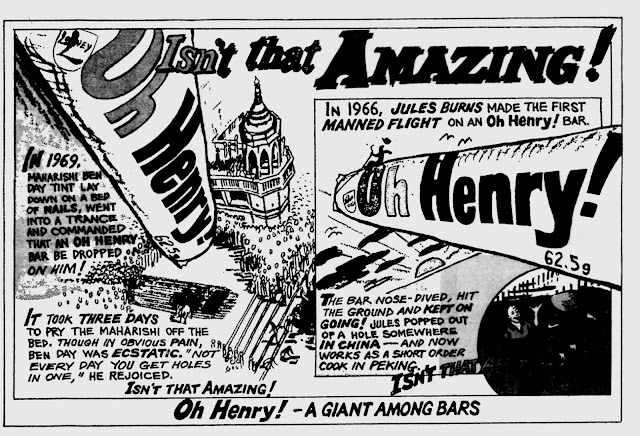 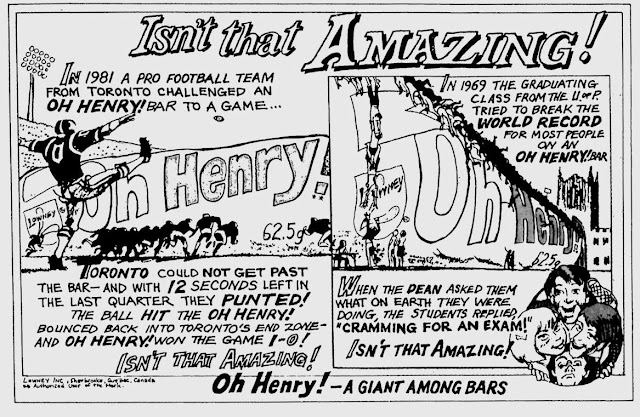 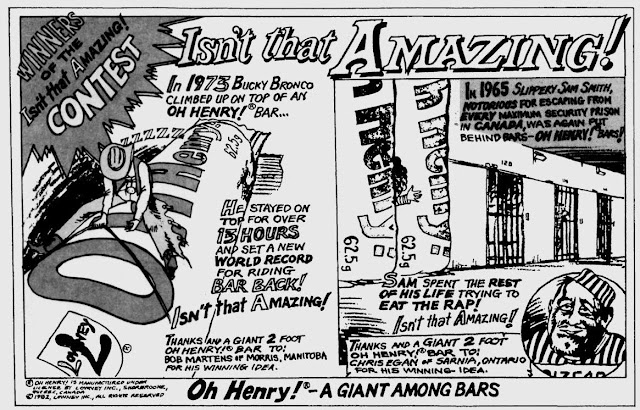 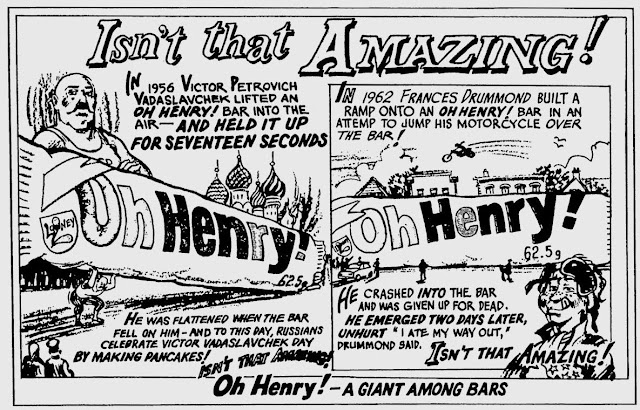 Somewhere along the way, comic ads became less specialized, and became little more than formulary pieces just giving the bare bones of their product.  "Here's this impressive item!  Here're legitimate reasons to get it!!  Now, go buy it!!!" 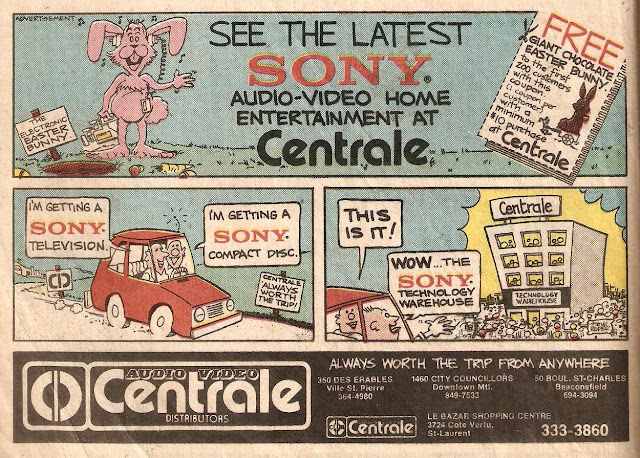 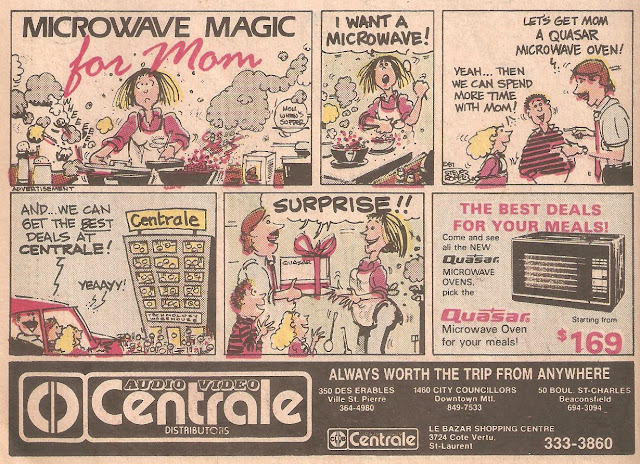 For me, the low end of the scale was when I saw this revamped Popsicle Pete ad that has all the subtlety of a PSA (or Captain Planet) comic.  There's practically no similarity to his former incarnation (which may or may not be a bad thing) and really, no one was crying out for another redundant S-hero team whose cliched team is composed of The Hero, The Girl, and The Other Guy.  It has all the basic drama and resolution of a typical Hostess Fruit Pies comic, only with less memorable script and art.  I'm embarrassed to even look at it.  Feel free to avert your eyes - you won't be missing much.