On October 21, 1989, inside the comics page, there were some interesting advertising. There had always been brief comic advertisements inside the pages of the Gazette Comics, but these were a little different: 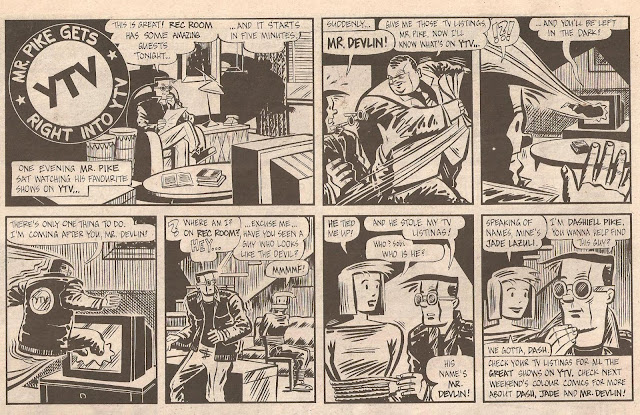 These chronicled the adventures of Jade, and Mr. (Dash) Pike who were chasing the nefarious Mr. Devlin through several TV shows. Mr. Devlin had committed the eeeevil deed of stealing Dash's TV times, without which, he would have to sit around all day for his favorite shows to show up. Horrors! The fiend! Could this plot to demolish (uh, encourage?) lethargic activity be stopped? 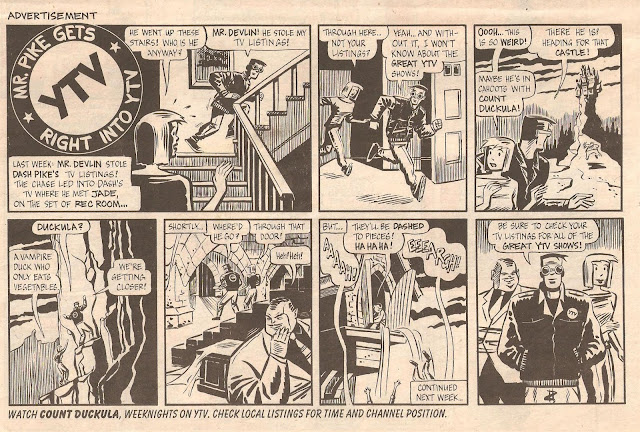 It was the first time I'd seen sequential advertising, and I looked forward to the next instalment. This was quite an acomplishment since many of the shows they were talking about were completely new to me, since I didn't have cable. I was perfectly fine with getting my TV shows from the TV antenna alone. Even if it meant having to rotate it to get perfect reception, and God forbid there should be weather conditions. At the time, I didn't see the need to sign up for multiple shows, when only a handful would be worth watching.

It was a different time, Okay?! 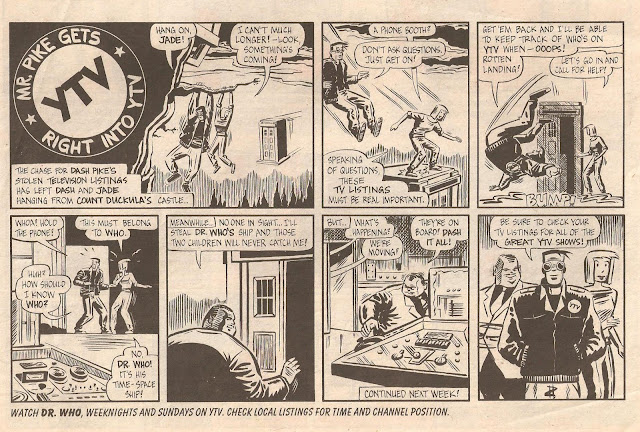 Now, of course, I'm a little curious as to what some of these shows were like. I never saw Count Duckula or Danger Mouse, but from what little I saw of them, they seemed like interesting cartoons I might've had nostalgic memories of. I was always more attracted to the animated stuff than the live-action stuff, and was always mystified as to why my classmates prefered the latter. (The exception being Pee-Wee's Playhouse, which I watched to get an idea of what the appeal there was. If there was ever a show that differed from other sitcoms, Pee-Wee took the cake) 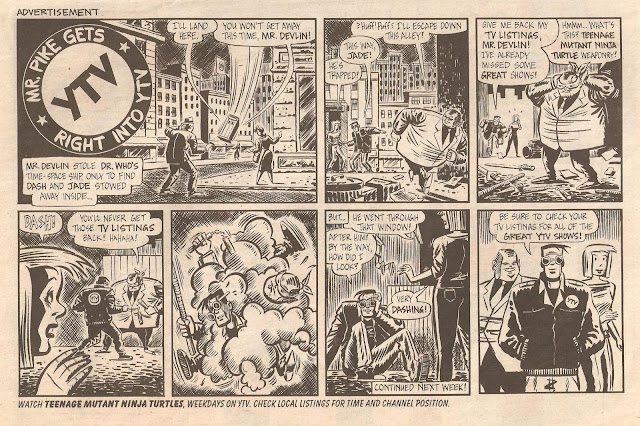 Of all the shows mentioned, only TMNT rang familiar bells. Of course, the turtles were popular enough that they were able to air on regular TV & Cable without having to pay devotion to either. This was one of the reasons I didn't see the big deal in getting Cable, if some shows would show up on TV later. That, and the premise for the next show didn't seem that promising to me: 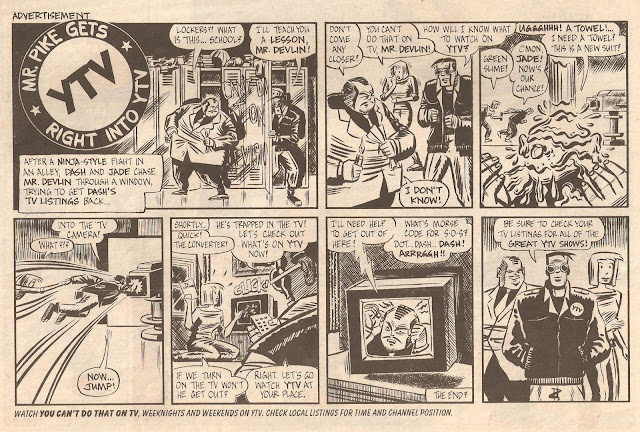 With the adventure concluding with Mr. Devlin trapped on You Can't Do That on Television for all eternity, it seemed like a good high note to end off on.

But not long after, the adventures resumed in the next TV season, on Feburary 10, 1990. 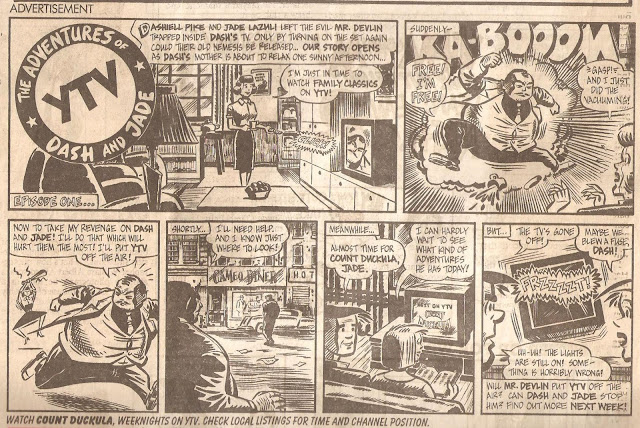 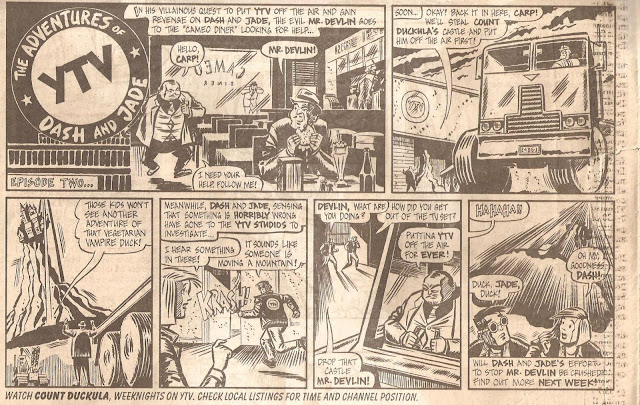 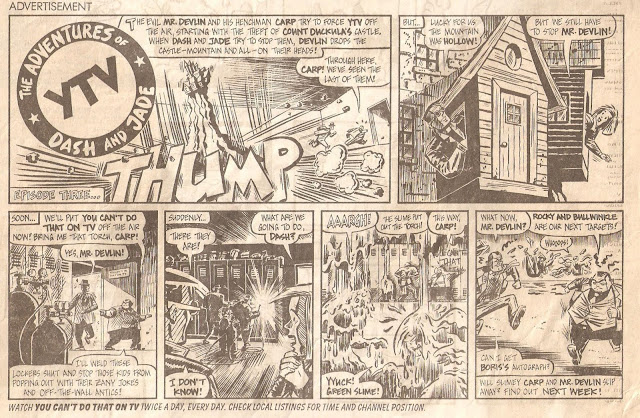 Unfortunately, I lost the episode where they invaded the set of Rocky & Bullwinkle. I would've liked to see what they did with the fast-paced show, and how they tried to sabotage it. If anybody out there has it, it's in the elusive March 3rd 1990 paper. (March 4th if your papers only showed Sundays on Sundays) Fortunately, you can still enjoy the rest of the story without prior knowledge. 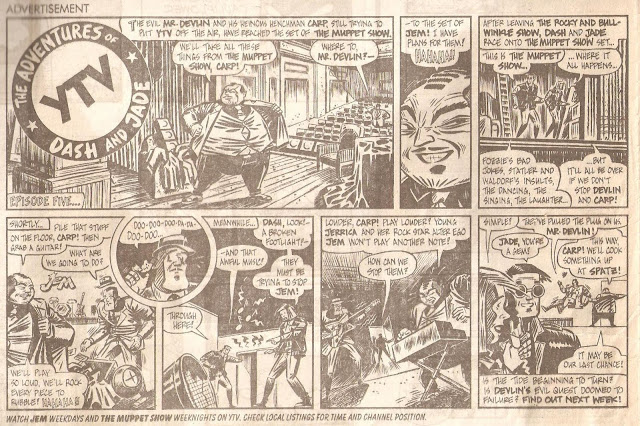 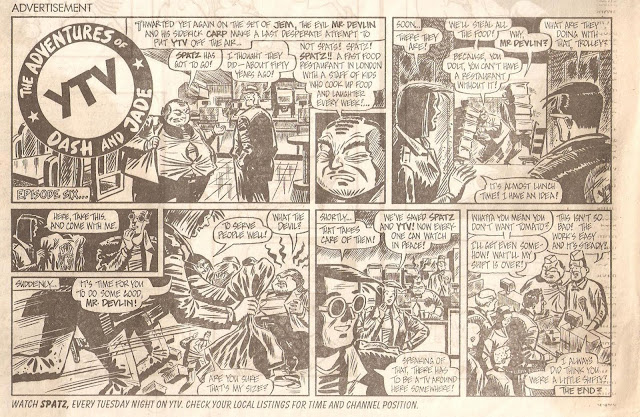 So being trapped inside a bad TV show wasn't punishable enough, Mr. Devlin had to be forced into a McDonald's job for all eternity. And despite the question of The End?, there never was any further follow-ups. I guess YTV got their money's worth and figured they'd get more bang for their bucks by advertising on TV, their major circuit.
Posted by DeBT at 5:34 AM