A long time ago, I posted the Sunday comics that appeared during the last burst of creativity from Johnny Hart's BC, where he created a months-long continuing arc where Peter strove to prove that the world was round. 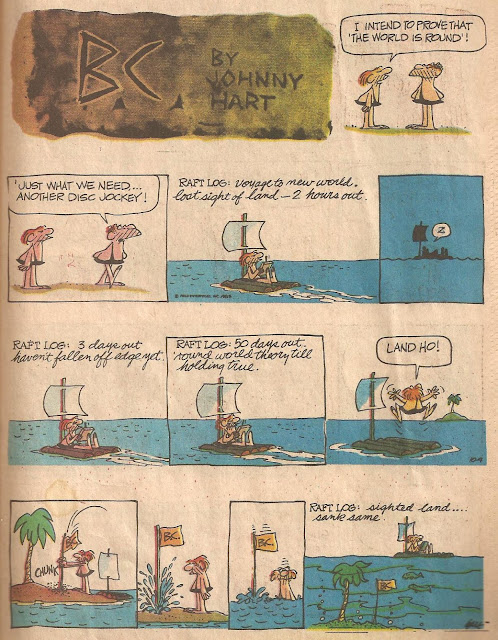 There had been previous comics attempted at these excursions, but it was BC himself who made these trips, not Peter; and they were solely limited to one-off affairs. 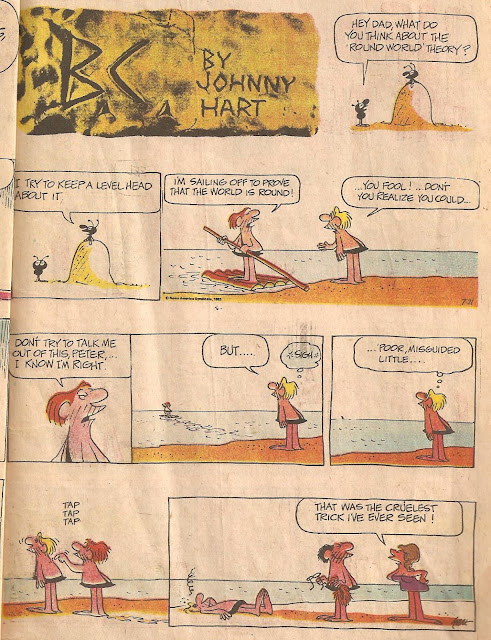 Having finally collected the dailies that led to the creation of this arc lasting roughly 2/3 of a year, it's clearly a rambling affair with religious overtones and too many characters thrown in with little to no effect than to add amusing or pointed commentary for what would normally be a solitary voyage.

There's a LOT of comics after the cut.  These probably seemed more impressive when seen on a semi-daily basis.

Almost from the start, we're venturing into archaic territory with obscure references that modern-day audiences wouldn't comprehend, and old-timer readers would.  Looking the name up online, Lorna Doone could very well be alluding to the historical novel, but based on later context, could very well be a cookie of the same name.

Surprisingly enough, despite starting out in late January, there isn't much sporadic progress in Peter's journey, and even the majority of the BC cast don't notice he's gone.  Please excuse the poor quality of these scans - I had limited resources to work with, some of who replaced BC with The Boondocks during crucial points.

In fact, most of the missing comics are regular setups for punny jokes.  You're not really missing anything here.

We also get to see the first of many talking animals that Peter'll encounter during his voyage.  Evidently, Johnny Hart realized that having Peter continuously talk to himself would be akin to the rantings of a madman.  Not to mention Peter works better in one-on-one conversations.  So we get a stand-in who provides the first of many self-depreciating jokes.

Better get used to these crab jokes.  There'll be plenty.

In case it's not entirely clear (and it isn't) these are apparently migrating sea snakes, not to be confused with water snakes.

And now we've got a clam added to the floating cast.  What fun.

Back at home, Clumsy Carp uses his Ichthyology skills to determine any news about Peter's current whereabouts.

There must be some kind of inside joke of "Should have flown" among cartoonists, since I don't know where it comes from.

For the most part, I avoided showing unrelated weekday strips, but felt these were two out of many that was too good to pass up.

This is the first appearance of the Aliens, even though they don't show up again until later.

This is where the Religious factor begins to come in play, which seems grossly out of character for Peter on days that aren't national holidays.

Just in case the current cast of a crab, a talking clam and a sailing caveman wasn't enough, we've got a weighty Albatross added to the mix.  The octopus only showed up for the Sunday comic, and never showed up again.  Apparently, a waterlogged creature would be too much for an already crowded raft .

This joke hardly even works in context, because there's practically no chance of a clam getting a riffle in the middle of an ocean, miles from any shore.  This is likely a commentary on infringing waiting periods for when people absolutely need to shoot a target immediately, no matter what the condition.

This is easily the darkest BC strip ever made, with a malnourished Peter in the depths of despair, having given up all prospects of hope, despite the image of an island made visible via lightning in the background.

Finally a recent pop culture reference that I'm familiar with!  Too bad I always found the Got Milk! commercials to be more disturbing than funny.

This Sunday comic explains why they left the island so quickly after finding land for so long.

On the other side of the spectrum, conversations with God shouldn't be this casual.

Did I say the raft was being overcrowded?  We apparently haven't reached cast saturation point yet.  (Eels not included)

Whenever anybody tells you to stop being depressed, just say that you're suffering a craving for human meat.  Watch them back away and warn the police about your cannibalism.  In other news, we interrupt your story to bring you a message from our sponsor, [Blank].

Despite showing up in an earlier Sunday, the Aliens now decide to make a return trip back to Earth.

And then, after bouncing off the surface of the Dark Side of the Moon, the Aliens are never heard from ever again, making their presence utterly unnecessary.  If you're going to be hearing voices from the sky, you don't need extra competition.

And then, just to make things interesting, to avoid getting struck by a meteorite, the cast gets swallowed by a whale.  THIS is one underwater creature who manages to keep a lasting presence both inside and out. In addition, the Whale doesn't have too many lines, which makes it easier not to spout any silly jokes, and thus becomes less annoying.

Just as Peter is being swallowed by the sea, Clumsy Carp is able to feel a disturbance in the watery course.

While Clumsy Carp is walking around traumatized, the normally monosyllabic Grog displays a surprising amount of verbalization when he ever did before.

BC's occasional forays into Christian symbolism were unorthodox (if different) compared to most newspaper comic fare, but within the realm of Peter's constant conversations with God, it becomes rapidly annoying.

At this point, having reached land via travelling around the world (the hard way) we're introduced to a human character who'll surely be a memorable addition to the regular cast.  At least it's not another animal.

If an Italian caricature wasn't enough for you, then you're in luck!  If you don't like Native Indian stereotypes, then you're out of luck.

At this point, the girls reach a sudden realization:

And now, your daily philosophical allotment of life via ants:

After this brief cameo, the Guru gets off his high mountain, and is completely forgotten about, since like the Aliens, we never see him again either.

At this point, everybody's noticed the girls have gone missing, and decide to all go their prospective ways.

While Wily stays behind, the now erudite Grog comes to engage in some small talk.  Other than this instance, Grog doesn't seem to need to show off his sudden use for higher functioning skills.

Of course, it figures that just as Peter is getting ready to leave, the gang happens to come across the very shoreline that he shipwrecked (sorry, whalewrecked) at.

While Peter explores his new (old) surroundings, the gang are introduced to the people Peter was talking to.

This is actually a take on the Anteater's early name, when he was called Eatanter.  Somewhere over the years, the name was changed to avoid confusion.

For the record, Wily's poem and Peter's proclamation took place on September 11th, a date that unknowingly would have significant historical meaning just two years later.

While Curls and The Fat Broad stay behind on the beach, the rest of the cast decide on a whim to follow the Anteater (Eatanter) to wherever it'll take them.  Going through the same route Peter took, they go through the dark tunnel, round the corner, and open the door to find...

...the opportunistic salesman version of Peter we know and hate to love.

So what are we to make of this longwinded arc?  It started out fairly innocuously, with little fanfare or presentation and hardly any followup, lasting two months before showing progression.  Then once we got to see what Peter was up to, we were infected with Rumiko Takahasi syndrome where multiple characters are brought in to liven the story up.  Pretty much everybody in the regular BC cast showed up at one moment or another, and the few who had little to no consequence over the circumstances remained that way.

The constant shifting tonal changes and lack of focus could explain why this hasn't been collected.  Not to mention the annoying Religious overtones and Columbus comparisons which feel weirdly out of place for an anachronistic comic about cavemen tinkering with phones, ipods and computers.

I'll probably do another post about the comics after this, though this feels like a natural stopping point.
Posted by DeBT at 2:23 PM