There are instances where the enjoyment of a story can be waylaid by simple miscasting direction.  It can take the form of outrage over Hugh Jackman and Russell Crowe's singing as Valjean and Javert in Les Miserables, or inability to suspend disbelief that accident-prone Goofy would be a suitable match for Jacob Marley in Mickey's Christmas Carol.  In other instances, it can put a casting decision  in a whole new light.

The 5-issue comic, Three, written by Kieron Gillen, and drawn by Ryan Kelly, was created as a rebutal to Frank Miller's 300, which tended to glorify the barbarbic aspects of the Spartans while glossing over their more problematic philosophy.  Rather than go into a elaborative point-by-point explanation (though there was some page-by-page commentary for this comic on his blog), Gillen went for a more historically accurate fictional account of three Helots.  For those not hip to their archaic terminology, a Helot was a slave with land, with the catch that every year or so, a random group would be attacked by novice Spartans as a kind of target practice.  Even though they owned property, on the hierarchy scale, Helots ranked below slaves. 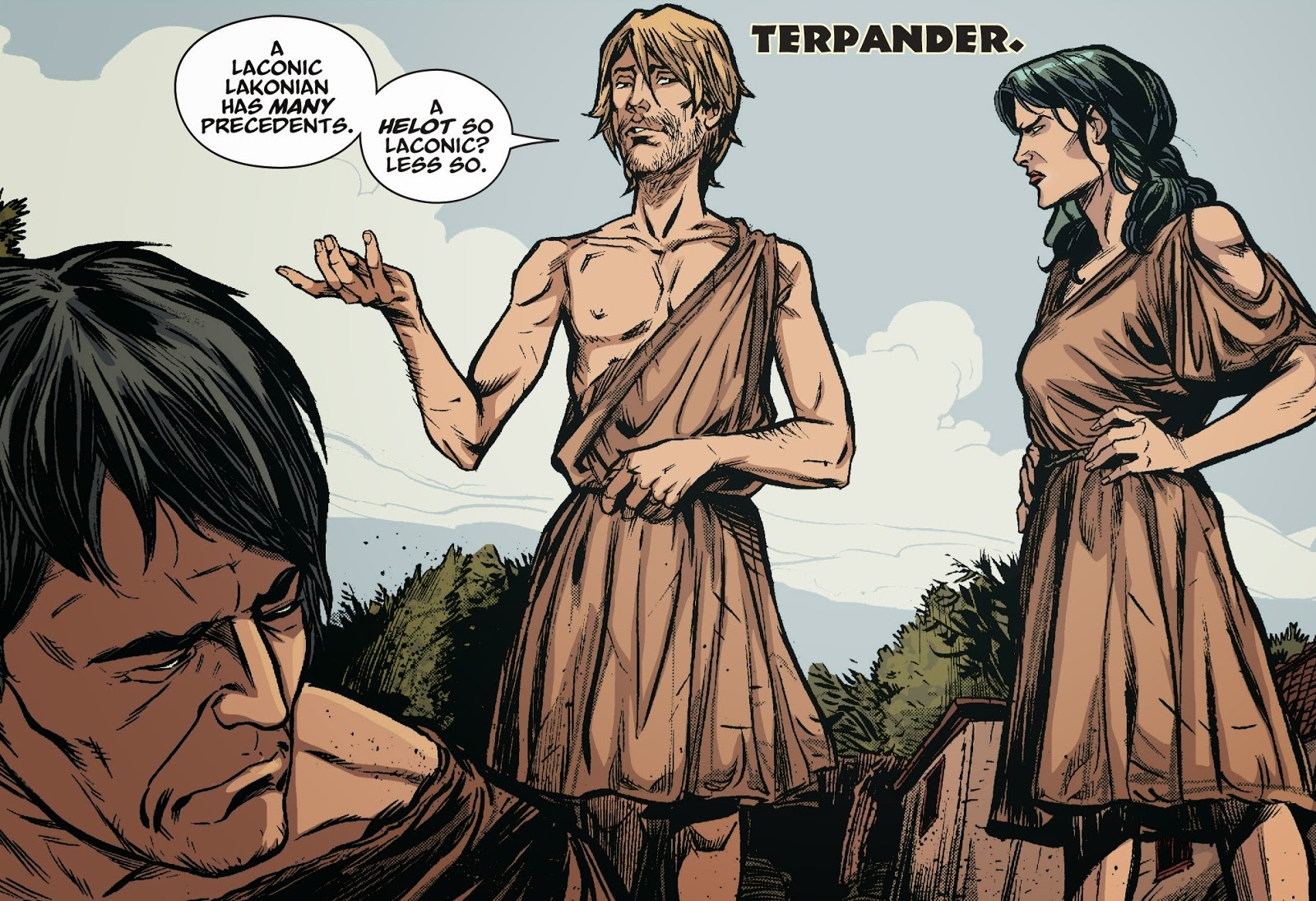 Any group setting of three people tend to rely on a typical formula which generally consists of The Hero, The Girl, and The Other Guy.  Usually, The Other Guy usually ventures into uncharted territory that The Hero generally won't go, and is generally more interesting.  In this case, the role of The Other Guy falls onto Terpander here, who is unlikable among his kind, even on the best of days. 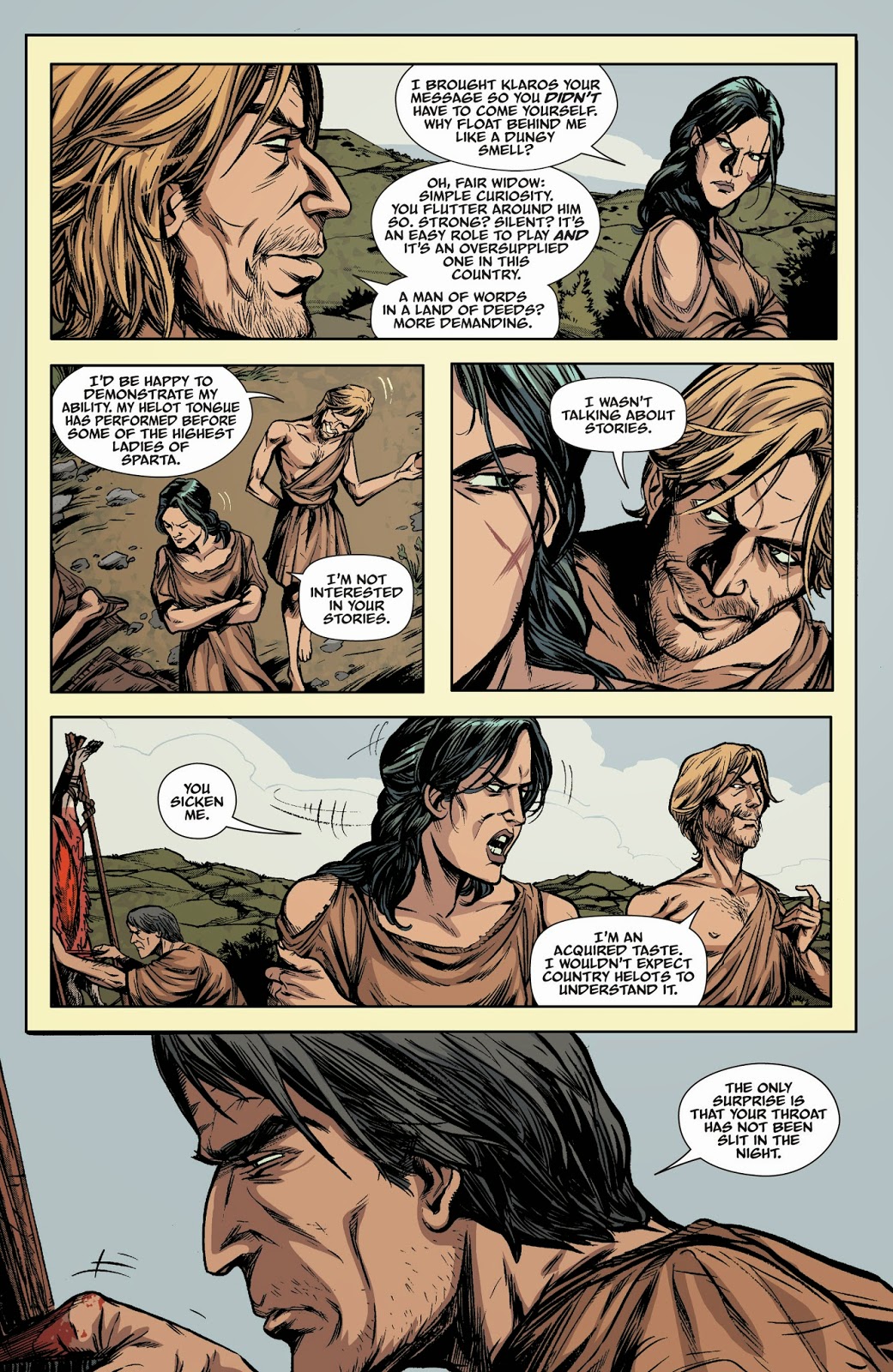 One night, a group of marching Spartans are on a return trip from a mission, and request lodgings within the Helots' house.  The Helots have no choice to turn down any of their demands since they're generally unable to refuse hospitality from their masters. 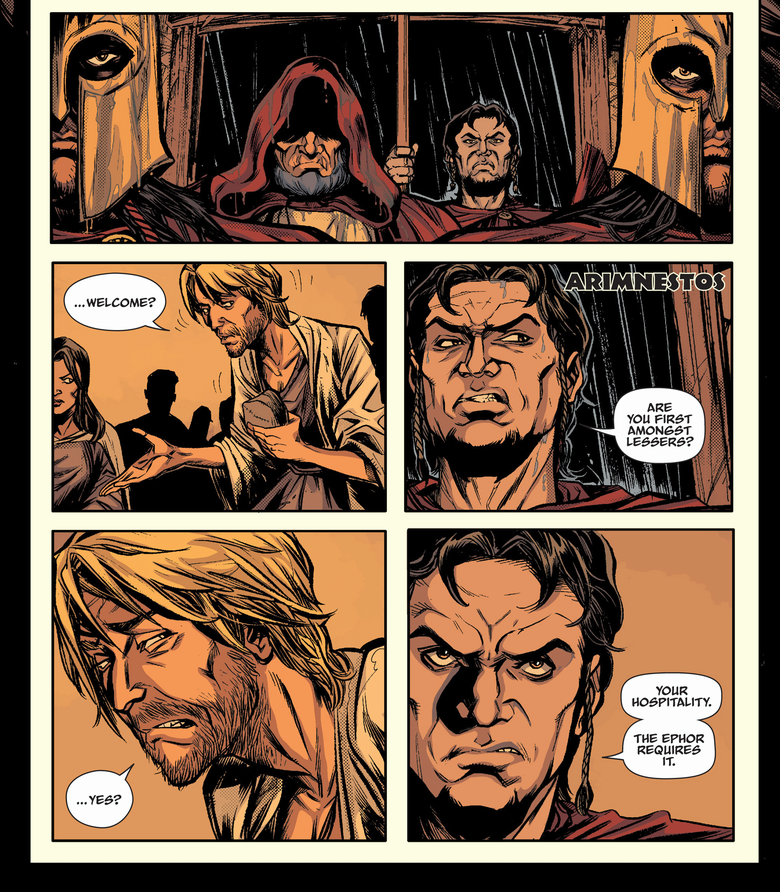 During the course of their stay, the Spartans force the Helots to drink wine, which they are unaccustomed to.  When one Helot throws up his portion, the Spartans have stander-bys lap up the remains as not to refuse their hospitality. 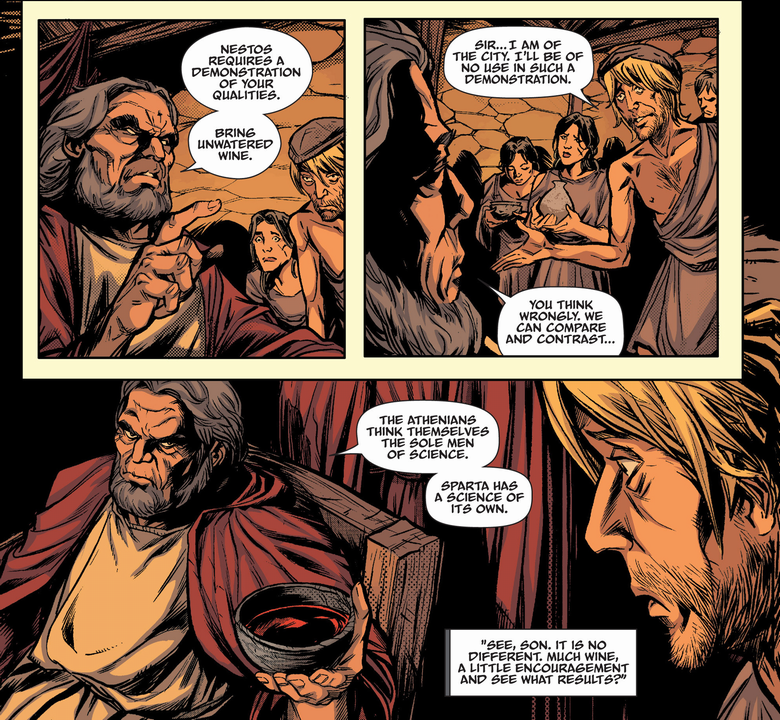 As a way of revenge, Terpander starts telling a story about a Spartan victory that turned to defeat when the returning party was ambushed by nameless Helots who saw the opportunity to get some payback of their own. 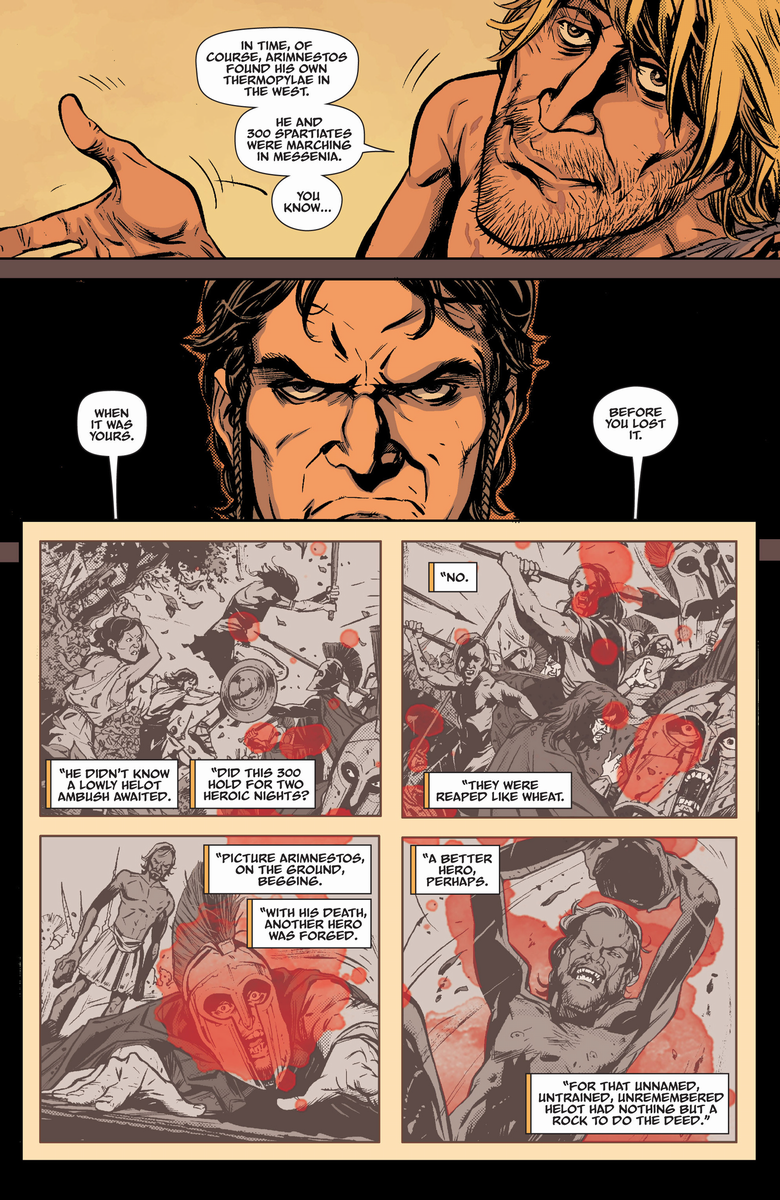 This does not get much satisfaction from the audience, both in the home and visitor teams.  As a result, the leader gives the order to kill everyone, save the poet.  Somehow, one of the other Helots who'd been faking his injuries, managed to kill off the threat, leaving one Spartan survivor and three Helots on the run from their pursuers, since if any other Helots got the wise idea that their masters could be beaten, it could spread some ugly Spatarcus-type revolutions. 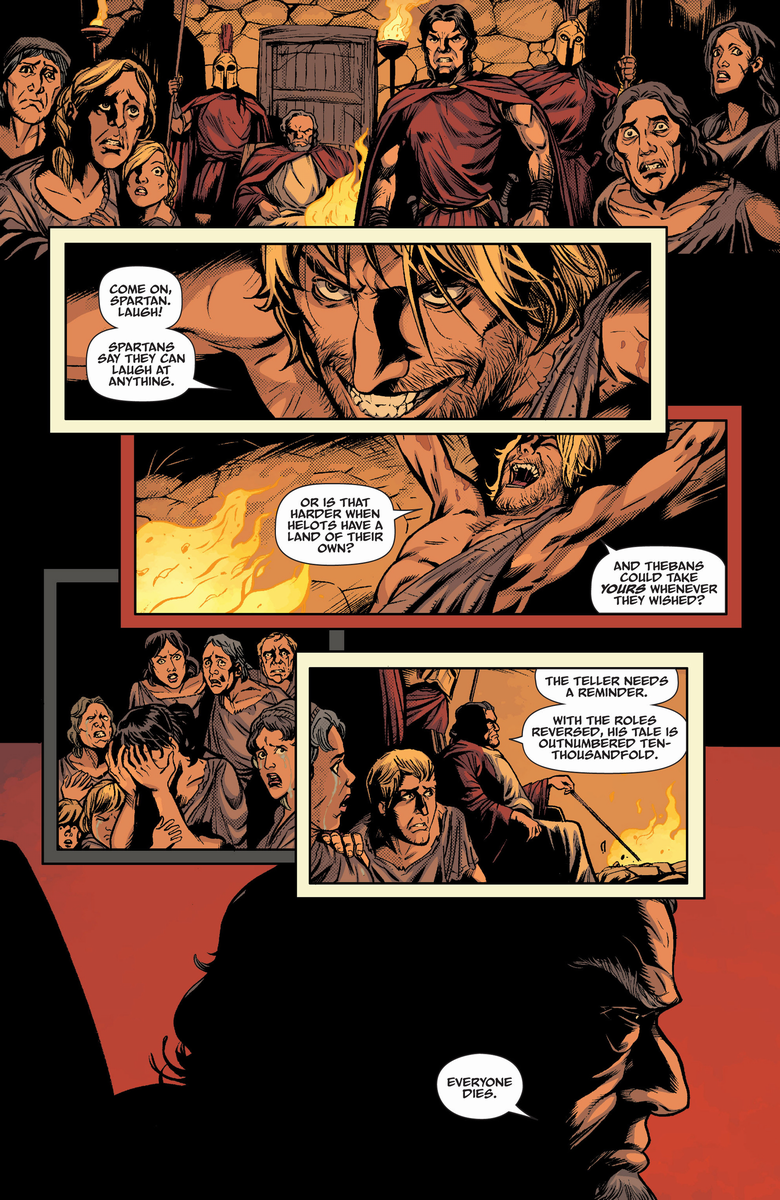 While reading the first chapter, I couldn't help but notice that the the part of the smarmy poet, Terpander, had facial expressions that reminded me of someone.  Furthermore, his one-shoulder loincloth and 5'oClock Shadow seemed reminiscent of another blonde smartass on the comics page: 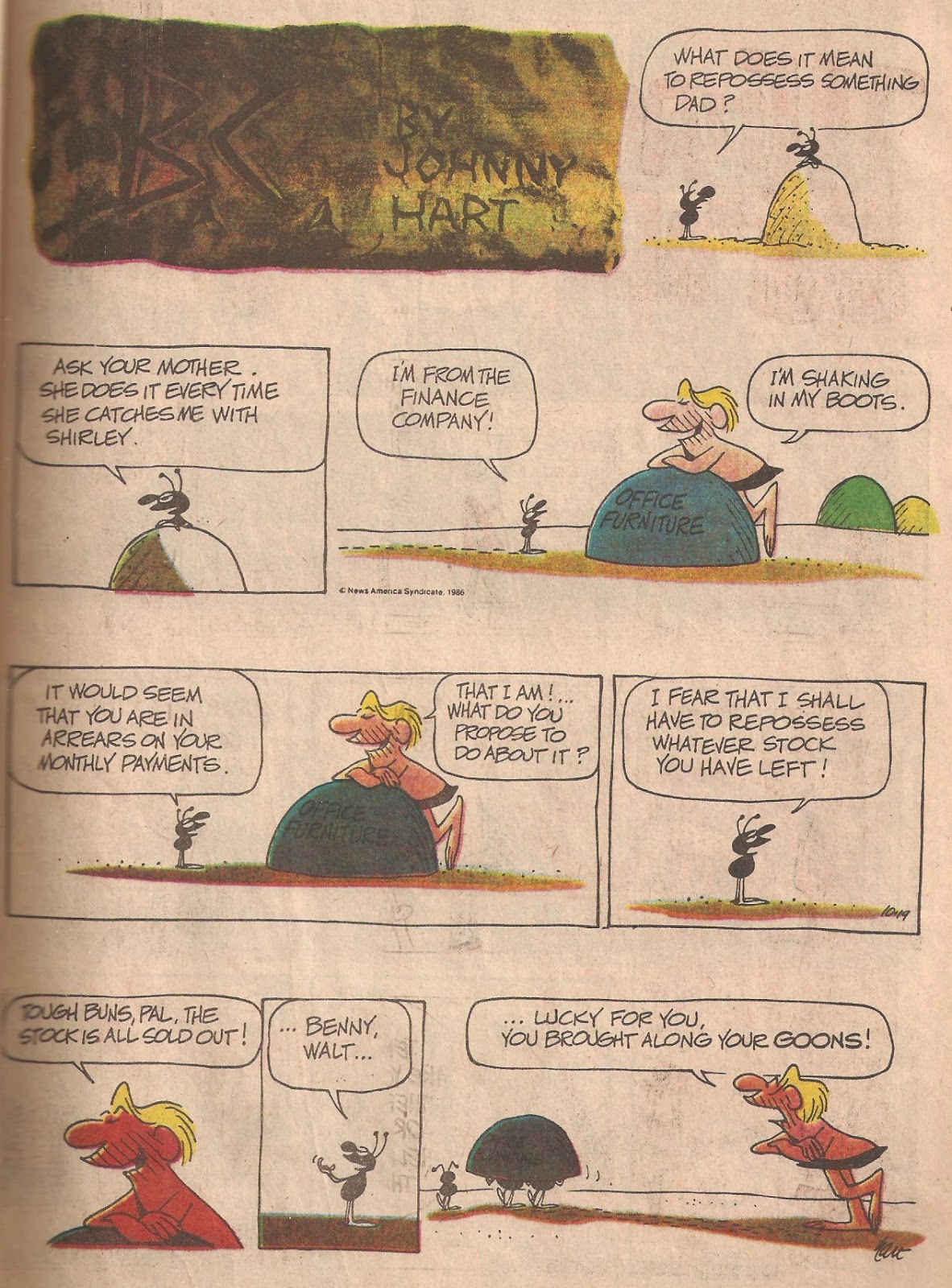 While it's easy to get Peter and BC mixed up, there's an easy way to tell them apart.  For starters, BC is more naive, and has flat red hair, while Peter is blonde and has poofier hair.  Just think of him as a false prophet who seeks out to make a profit.  It's tempting to think that Caveman Peter was reincarnated as a Helot in a later life, only to suffer from his overconfidence of his ability to manipulate his audience. 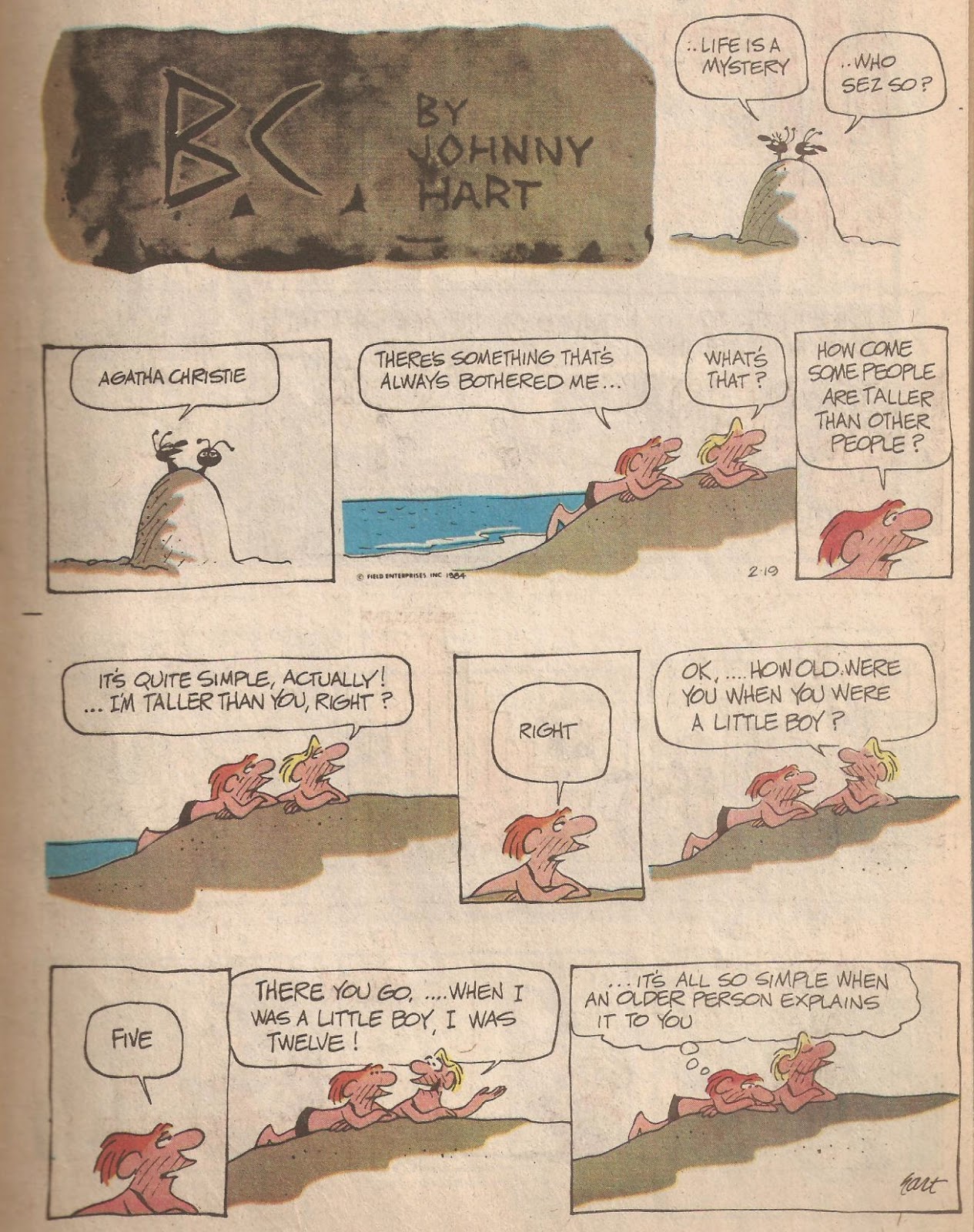 Peter regularly has late risers for breakfast, and can run circles around the opposition with his infallible logic. When a potential business opportunity comes up, chances are he'll be there to set it up when supply and demand calls for it.  Otherwise, he'll create demand where none existed.  In the BC V-game sequel Grog's Revenge, Peter is the one who's in charge of the toll to allow Thor admission to the next mountain level, which requires him to pick up an insane number of clams lying around in the level if he's going to continue.
The scenario that cemented his reputation as an opportunistic conman was the Christmas Animated Special where he made up a holiday with the intention of having his friends buy rocks for each other.  And by rocks, I mean the granite kind, not the shiny diamonds kind.  After all, he who dares, wins. 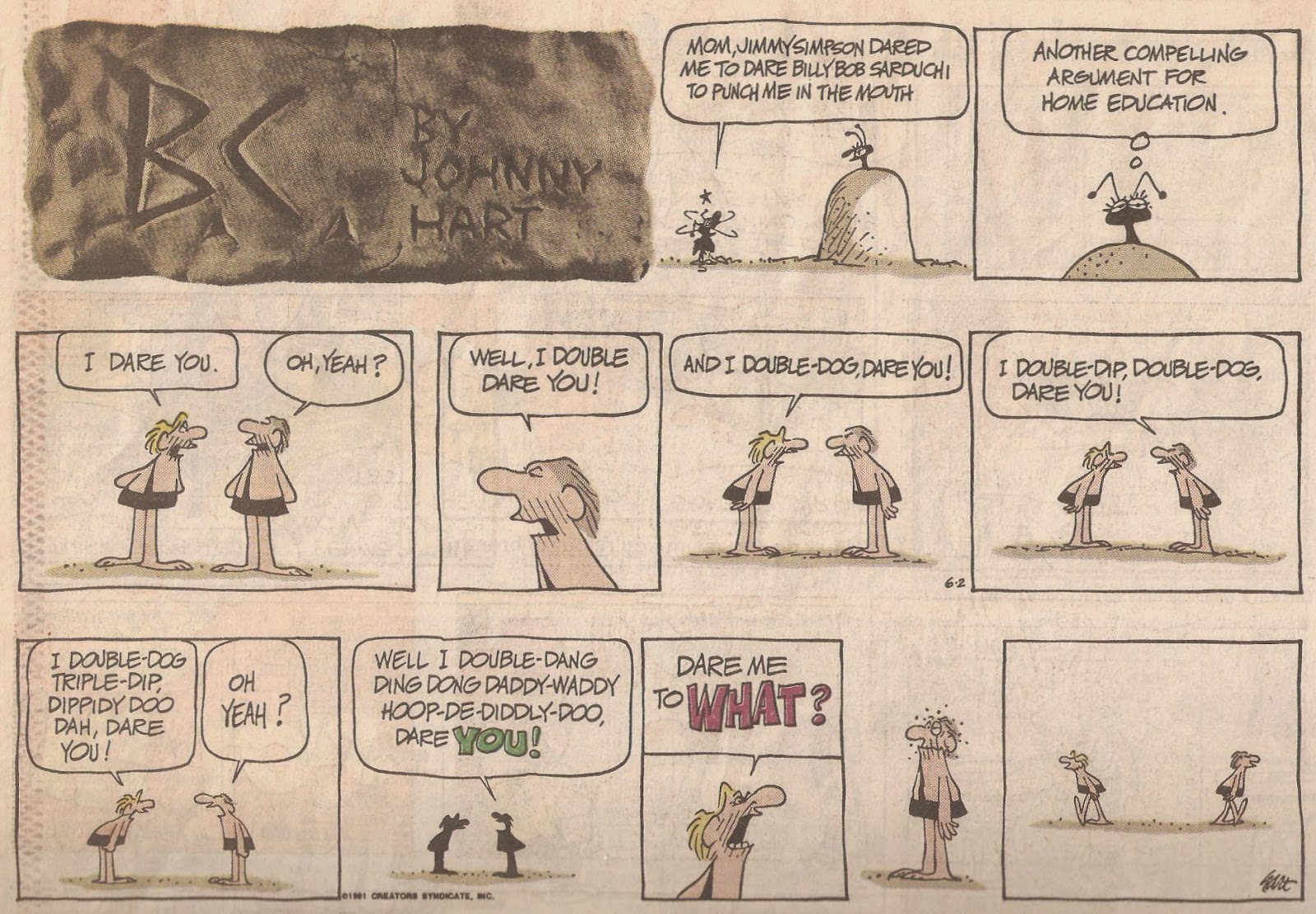