The Canadian Eyeshield 21: The Zuchinni Warriors

I've been on a nostalgia kick lately, re-reading all kinds of old books and comics I've kept for years, just waiting for the opportuinty to present itself.  (i.e., running out of new stuff to read)  One of these was marathoning the excellent Football Manga, Eyeshield 21.  When it was being serialized, I couldn't help but notice that there were some surprisingly similar parallels with the Gordon Korman book The Zucchini Warriors.  The MacDonald Hall series centers on two boys, Bruno and Boots, who are always getting into various states of trouble at a boarding school, long before Harry Potter made such an institution look cool. 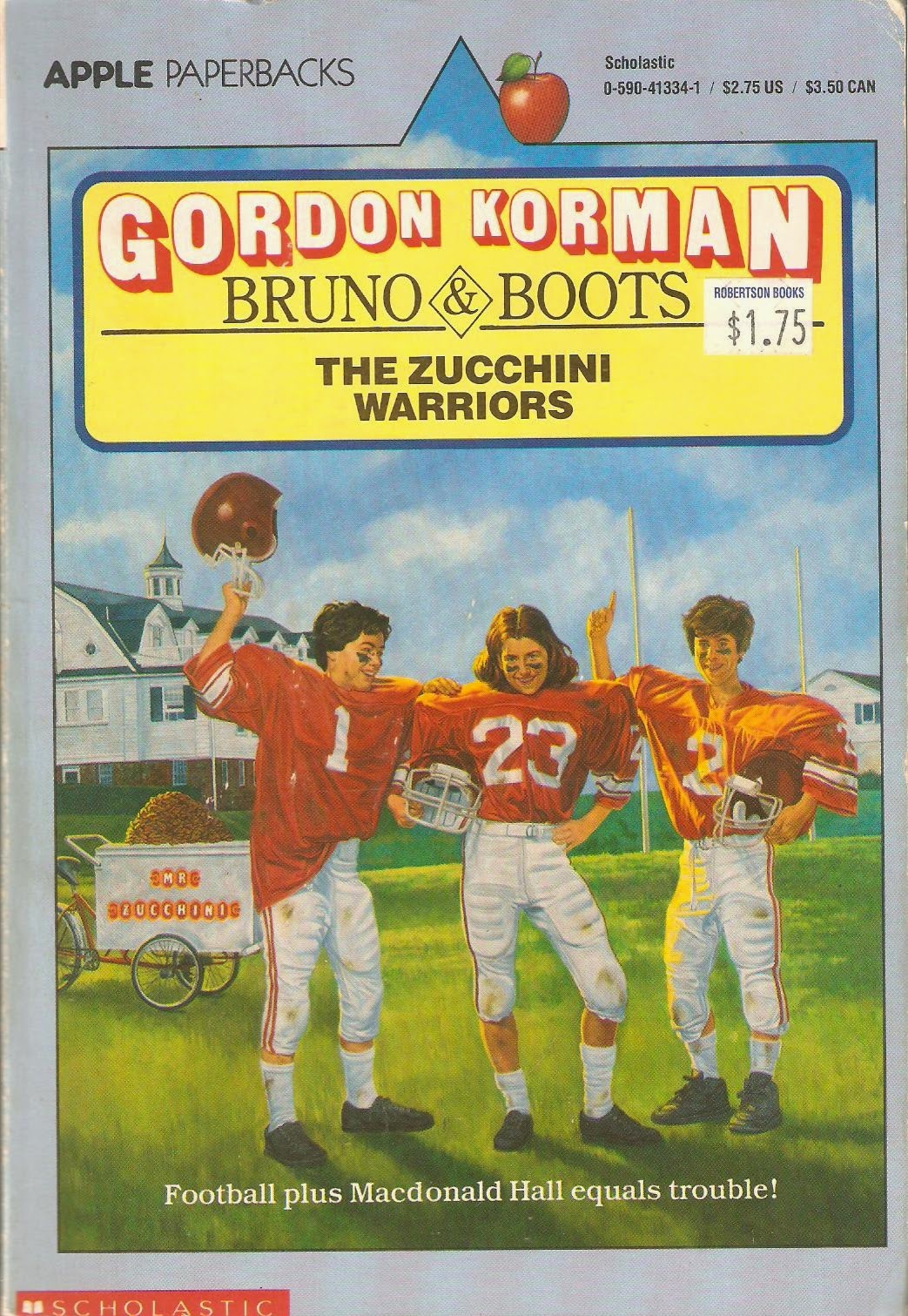 Gordon Kormon also wrote other Sports-themed books, such as the misfit Baseball team The Toilet Paper Tigers (led by a Female Hiruma, no less) and the Slapshots Hockey team, but they're pretty much by-the-numbers in terms of storytelling compared to the zaniness that is Zucchini Warriors.  It's possible that most of these traits are part of overused themes from Football movies, but since I have no interest in those, I'll have to plead ignorance.  The only Sports cliche I'm aware of is from Sakuraba's being a major inspiration to an invalid kid in the hospital.

The identity of Eyeshield 21, the infamous running back is secretly Sena Kobayakawa, an wimpy short kid whose trait of being a gofer for bullies gave him incredible sprinting speed. 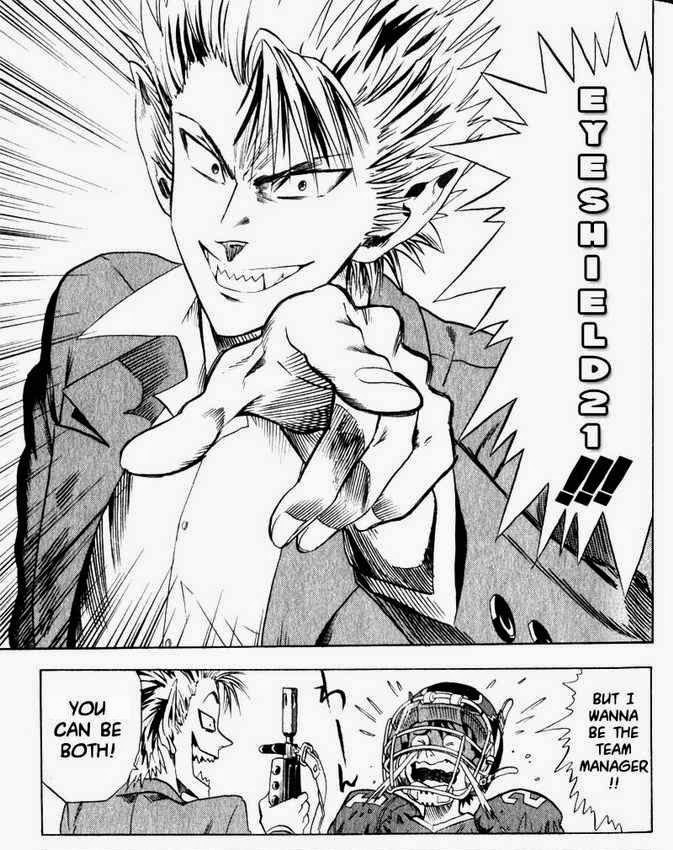 The identity of the Zucchini Warriors Quarterback, Cathy Duncan, from Scrimmages's Finishing School (who doesn't even attend MacDonald Hall) is given the secret identity of... the school nerd.  Normally, the role of the S-hero is hidden behind the unlikely facade of the unassuming quiet nerdy kid.  Here, it's inverted, with the role of the qualified athletic girl hiding behind the facade of a wimpy nerd.

The leader of the Deimon Devil Bats, Hiruma, love child of Kurata Sana and Akito Hayama, gets players to do his bidding by threatening to reveal their most embarrassing secrets, lest they wind up dying of embarrassment. 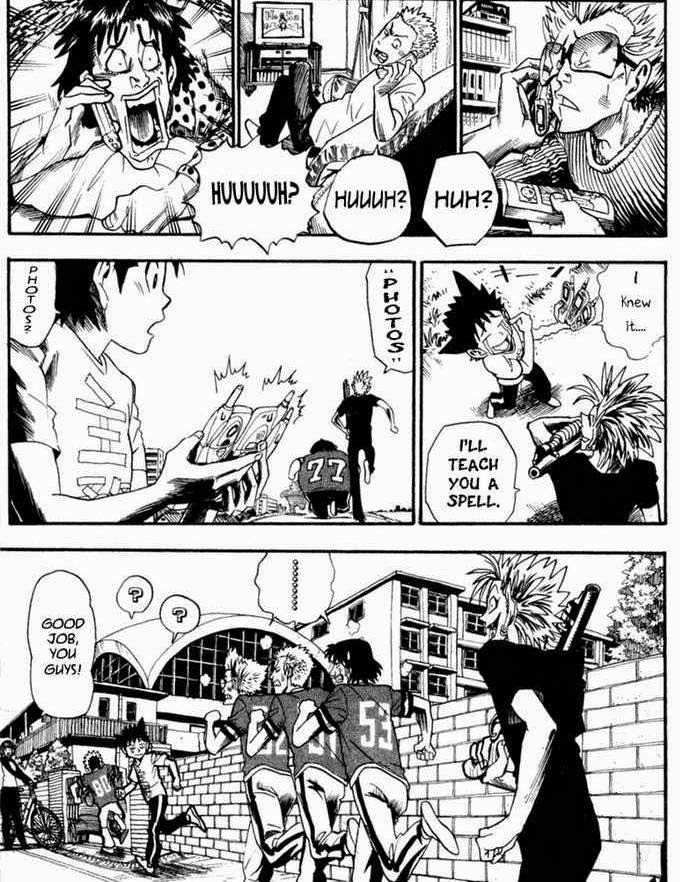 The Zucchini Warriors have Myron Blankenship, a notorious blabbermouth who simply can't stop telling people about their most personal embarrassing gossip, even as it winds up making him extremely unpopular in the process.  He even reveals to the headmaster the particulars of an elaborate nighttime prank that he himself participated in.

While Hiruma is able to accomplish great feats and deeds through threat of blackmail, Bruno's friends agree to comply through his wishes only through his constant and convincing arguments.


"So why are you all here?" Bruno challenged.
"Haven't you figured it out yet? asked Boots, half in exasperation and half in amusement.  "We're here because talking you out of something is ten times more work than actually doing it!"
(From MacDonald Hall goes Hollywood, but applies here as well)

After each victory from his ragtag team of football players, a building extension is made to the clubroom, thanks to Hiruma's intimidating information over the principal.

In The Zuchinni Warriors, the sole driving motivation behind the MacDonald Hall students in playing football is not out of pure love of the game, but to get a Rec Hall that the money was used to make a football field instead.  Hence Bruno Walton's force in convincing his classmates to appeal to their sponsor, even if they have to eat dozens of unappetizing Zucchini sticks in order to do so.

On Sena's first game, when he got possession of the ball, he wound up making an amateur mistake:

Sidney Rampulsky is the fastest receiver for the Zucchini Warriors, but despite his speed, he has one glaring fault - he's notoriously clumsy.  Cathy even said that she'd never seen someone trip over the 30-yard line before.  In one of their early games, Sidney wound up making an unintended benefit for the other team.


"He can catch a pass, he can run like a gazelle, but he can't stand on his own two feet!""When he's going the right way, he falls!""Somebody should have told me," said Sidney reproachfully."We couldn't catch you!"

The Deimon Devil Bat's rivals, the Ojo White Knights have an excitable uncontrollable player, Ikari, who has to be constantly chained up otherwise he'd just beat up on anybody who says something disparaging about Ojo's team.  It doesn't even have to be insulting - he'll attack on the vague notion that sounds like an off-hand insult. 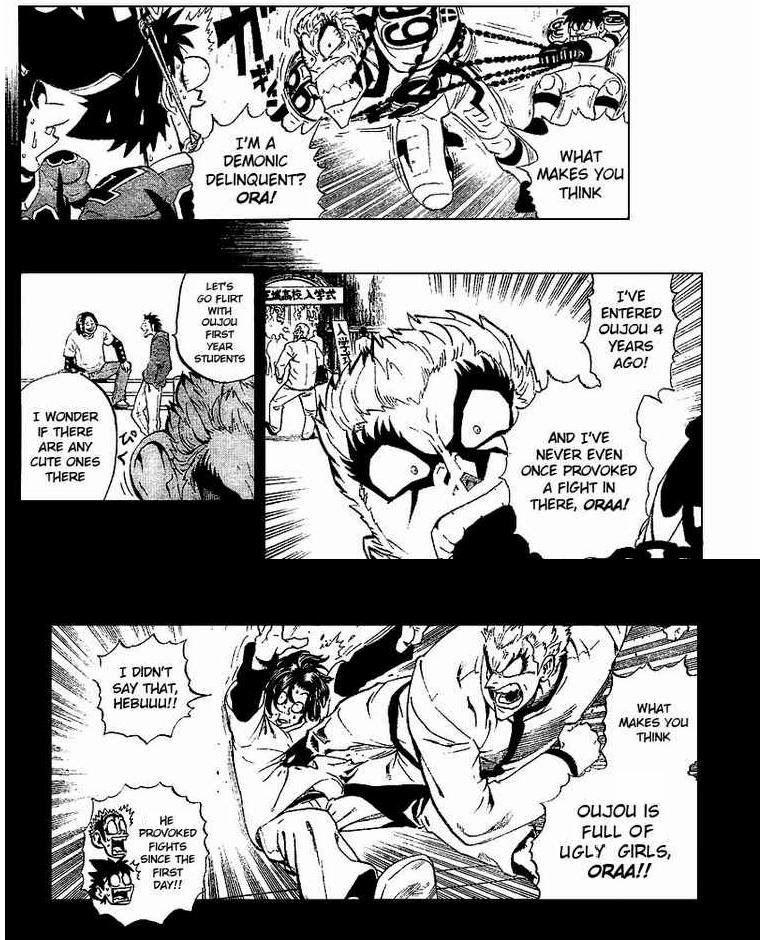 In The Zucchini Warriors, they've got Calvin Fitzhart, an external braggart who is constantly hyping himself up as a force to be reckoned with.


"The other teams are in big trouble!  I pity the poor guy who has to stand in the line against me!  I hope he's got his life insurance paid up!"
"Why?" asked Pete Anderson.
"Because I'm the roughest, toughest, meanest guy in the whole league!  My nickname is The Beast!"
"You mean you've played football before?" Boots asked hopefully.
"No!  But these nicknames have to start somewhere, and this one's starting right here!  The Beast!  That's me!"

Calvin is forever growling, snarling and basically ripping up pieces of equipment and patches of land in preparation of laying waste to the other team.  Of course, like any movie with multiple ads, his first debut ends with a dismal thud on the first play, which he weakly complains that he's suffered from a compound fracture that's little more than a bruise.  Even with this "injury" in a cast, he still continues to portray himself as a capable linesman, albeit temporarily benched.

Hiruma in addition to having a booklet full of lurid details on people's lives, also manages to heighten his intimidation by stockpiling a vast array of rifles, guns and other high-powered rifles.  Yet despite his impressive armory, his rapid-fire gunshots never amount to more than popgun stinging.  Likewise, one of the stronger rival football teams, the Seibu Wild Gunmen (loosely based on the Dallas Cowboys) signature move is the Shotgun. 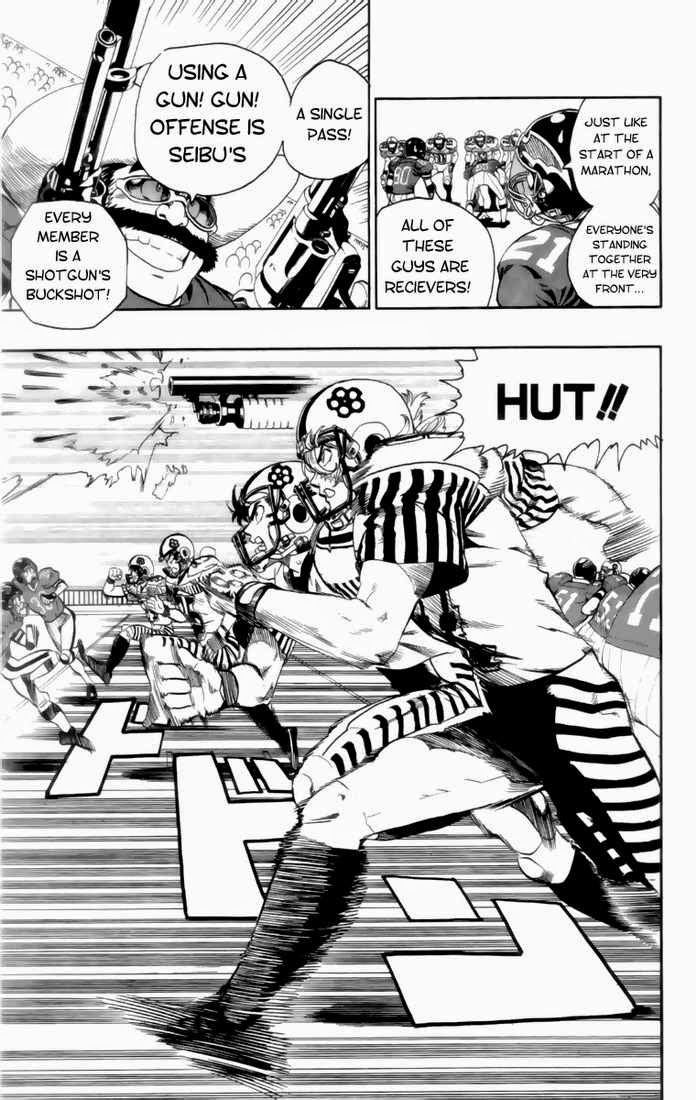 You'd think a Canadian boarding school wouldn't have access to firearms, and you'd be right, but that rule doesn't apply to the Headmistress across the road who's notoriously worried about the well-being and safety of her girls (despite all evidence that they're more than capable of handling themselves on their own) and routinely carries a shotgun to capture any potential peeping toms at night.  Amazingly enough, despite Mrs. Scrimmage's lack of precise aiming and common sense, no one manages to get killed.  The closest anybody gets to being hurt is when the Headmaster, Mr. Sturgeon, happens upon a scene where the football coach is lying on the ground late at night.

The penultimate team before the Christmas Bowl is an oversized well-built student, Gaoh Rikiya, whose imposing size and girth is a threat to anyone who stands in his way.  Yet despite his destructive nature, Gaoh has a sense of fair play, and won't resort to dirty tactics. 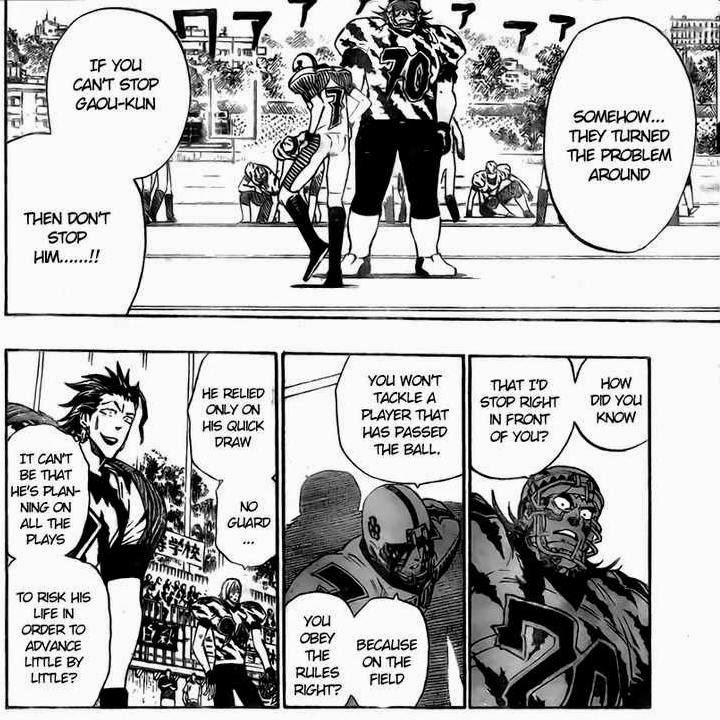 The last team the Zucchini Warriors fight for the Daw Cup has the indomitable figure of Craig Trolley, an oversized 13-year old who overpowers the opposition easily.  He's also the pure definition of a true Canadian athlete, since after every play, he never fails to apologize to the opposing team.

"Are you guys okay?" Craig asked, his face open and sincere."Yeah thanks," said Boots.Craig helped the three of them to their feet, then he did exactly the same as before, sacking the quarterback, only this time he dragged Larry into the pileup as he threw himself on Bruno, Boots, and Cathy."Sorry about that," said Craig earnestly, giving the four fallen Warriors a hand getting up."Don't worry about it," breathed Boots.  He turned to Bruno and Cathy.  "We're all going to die.""That's guy's amazing!  He's a cross between King Kong and Miss Manners!" 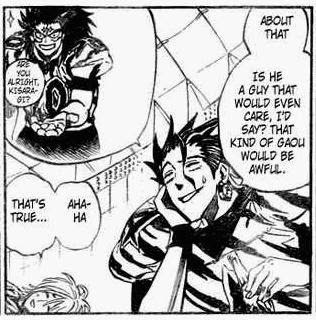 There's a few other superficial similarities I didn't include that didn't quite fit the bill:

One of the games the Deimon Devil Bats played was on a muddy football field, but that was more of a detail about the lay of the land, and an extra layer of difficulty for getting solid footing.  The Zucchini Warriors weren't so fortunate, as their muddy field was of more extreme proportions, having everything and everybody soaked in mud, making telling friend from foe an impossibility, constantly washing off the ball and general confusion all around, which doesn't make for a very exciting football match.

While the Deimon Devil Bats is led by brainchild Hiruma, the rest of the team generally consists of well-meaning idiots who have great physical prowess, but little common sense.  While not on the football team, one MacDonald Hall student, Pete Anderson could certainly qualify, given how often he spouts complete non sequiturs, is slow on the uptake, and constantly misunderstanding situations.  Chances are high he'd wonder if Elmer Drimsdale and Cathy Burton were the same person.
Posted by DeBT at 3:18 PM