Duffy Vs. his Computer

It's been a long time since I've posted any Duffy around here, so I'm going to circumvent to demand where none existed.  Some of these were from my first entry on the comic, but they're still at the reduced size (which I haven't bothered to go back and edit), so you don't have to feel ripped off.

While browsing several online newspapers, I came across one that had a scant scattering of various Duffy comics - only two weeks worth.  There was one standalone strip that seemed relevant here:

Already, we're treated to the internal thoughts of an overly obese piece of hardware that has nothing but contempt for the large figure pressing his blobby fingers all over its keyboard.  In addition, the monitor has all the disposition reminiscent of a 1.0 version of Bender from Futurama.  Obviously, this is not going to be a mutual working relationship. 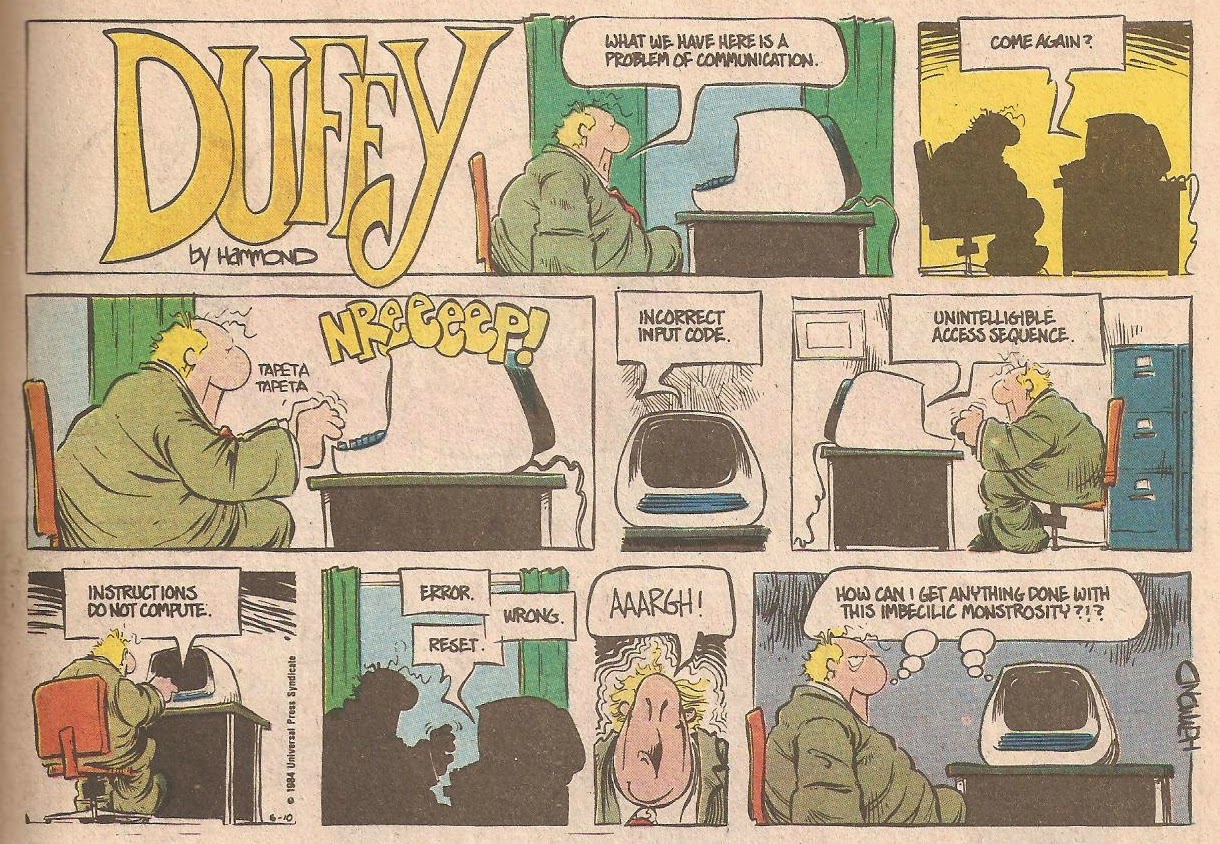 It's difficult working properly with a machine that seems almost malicious in its programming.  Any electronic device that has ready access to your personal information is pretty much just asking for trouble. 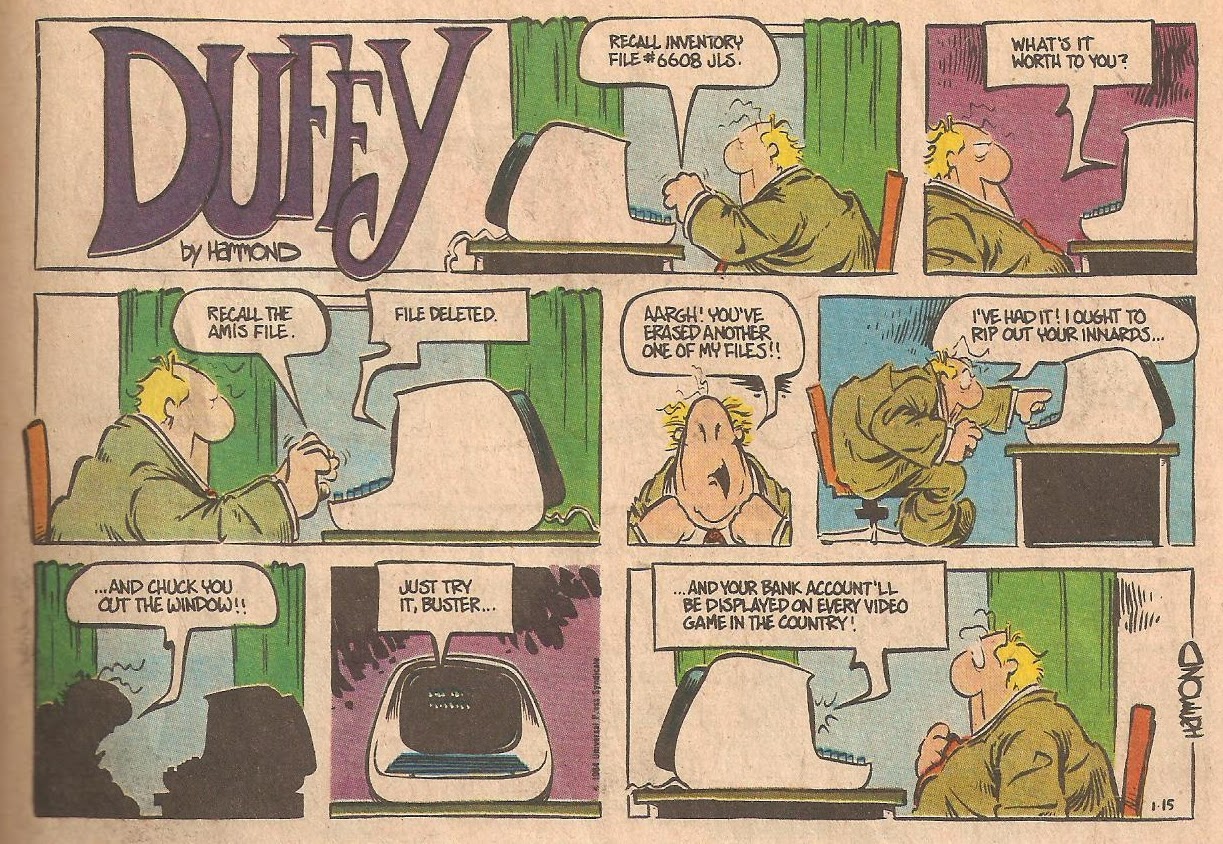 In the rare cases where the machine actually goes out of its way to be helpful, it feels more like mocking than beneficial.  It's as if it's saying it knows more than the slow-thinking bags of flesh sitting across the screen... which isn't too far off the mark. 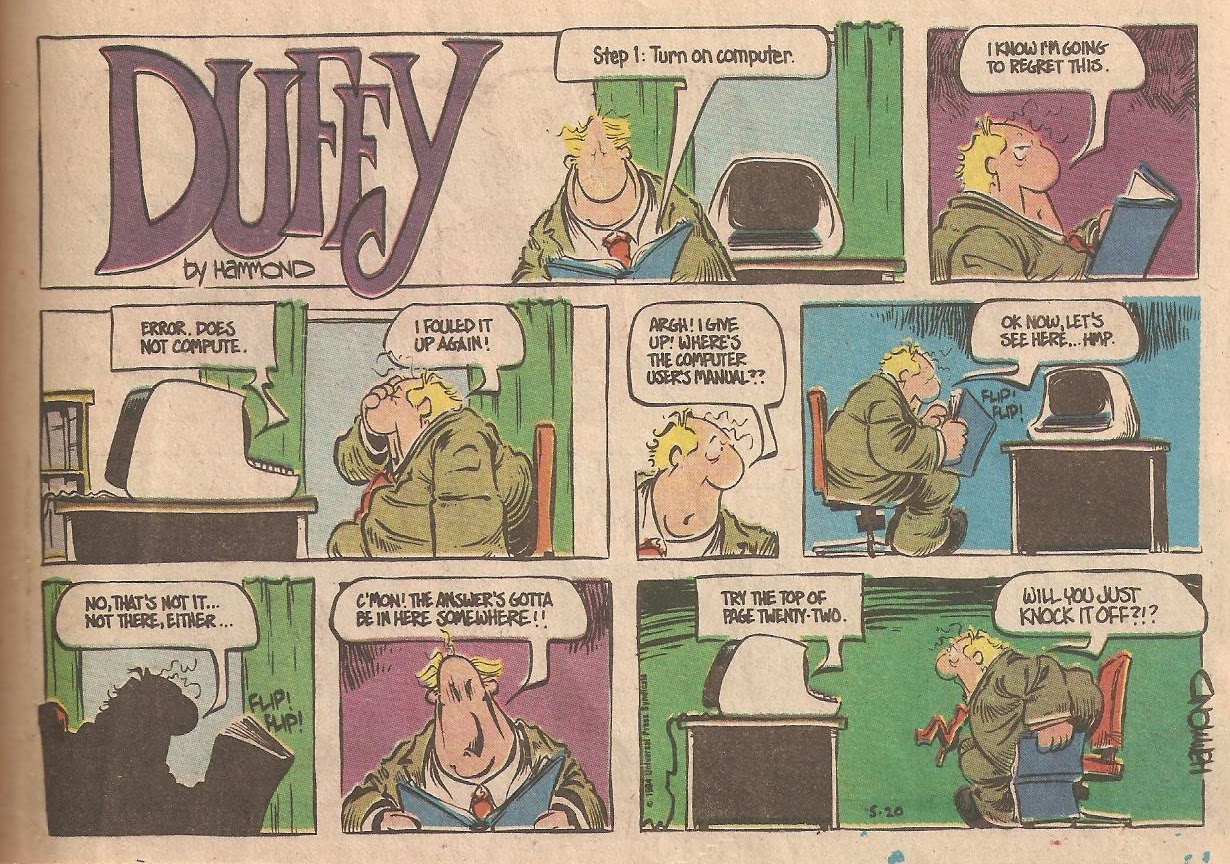 This style of displaying information in a disconnected monotone manner is only slightly less annoying than the excitable "helpful" Word paperclip icon.  (If I've brought up any long repressed memories that're better left forgotten, I apologize) 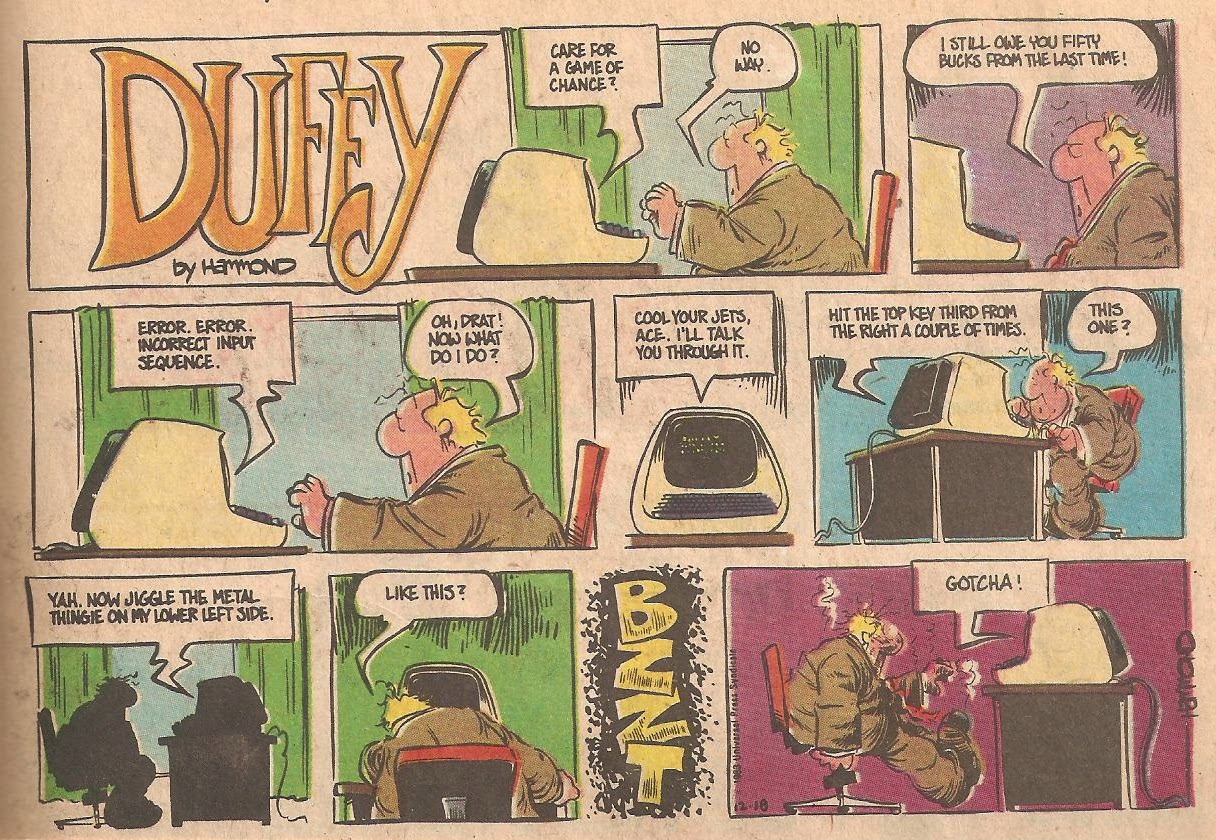 And when it actually goes through with the proper requests, it goes out of its way to take its time with compiling the order.  This was back in the days when computers would make funny noises while compiling code in order to ease the minds of writers pining for the days of typewriter clacking sounds. 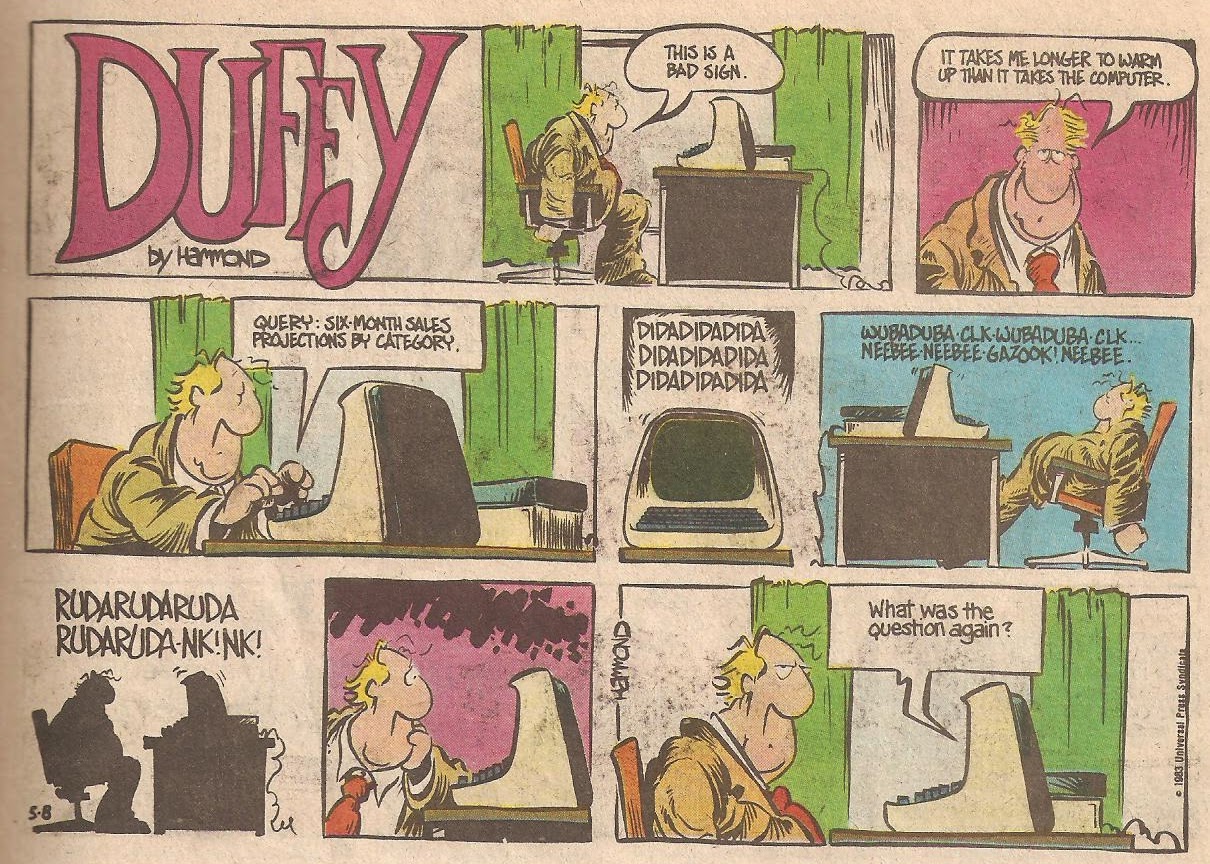 Usually in these cases, the wise move would be to go to a computer repairman to get past these annoying features that seem less the result of a trojan virus, and more of an ingrained prejudice against the man trying to make the office machine work.  It doesn't help. 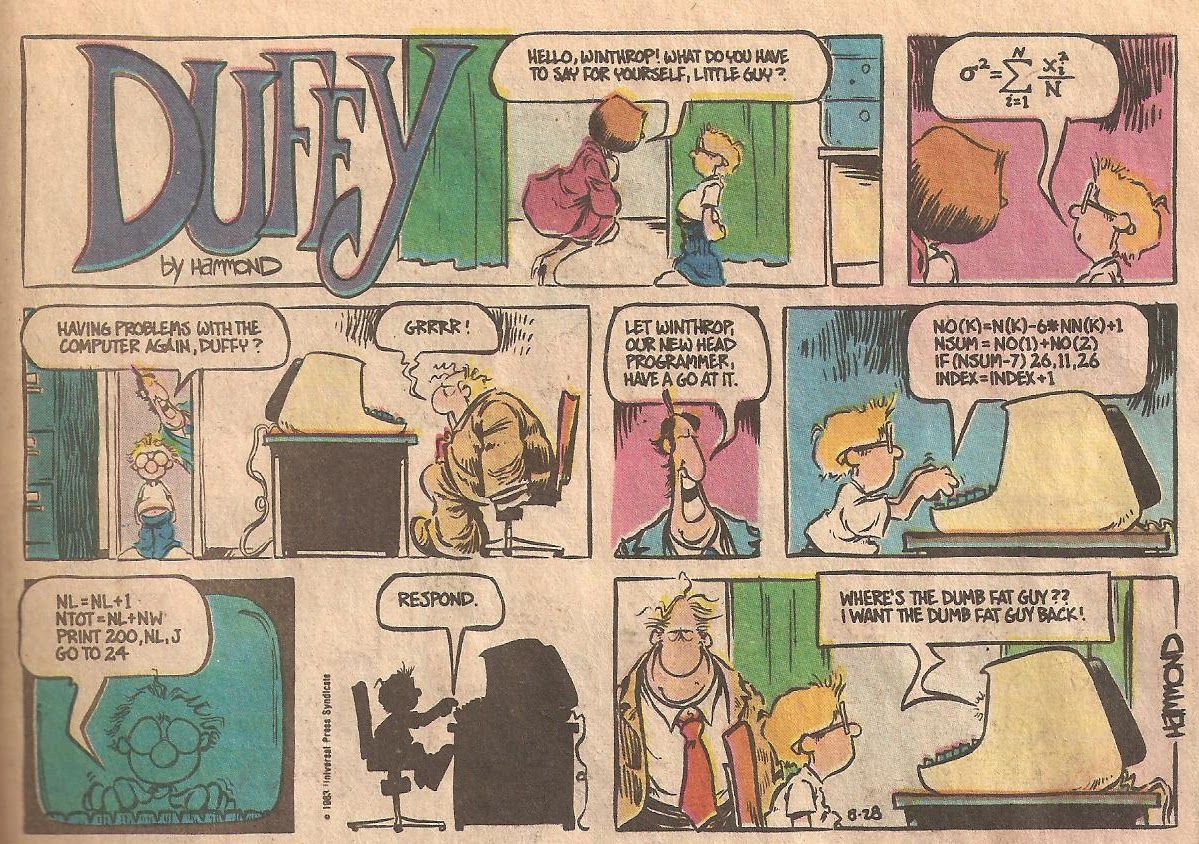 Interestingly enough, almost all these comics are displayed in reverse chronological order.  When read backwards, they provide a continuous narrative of escalating conflict resulting in an inevitable conclusion: 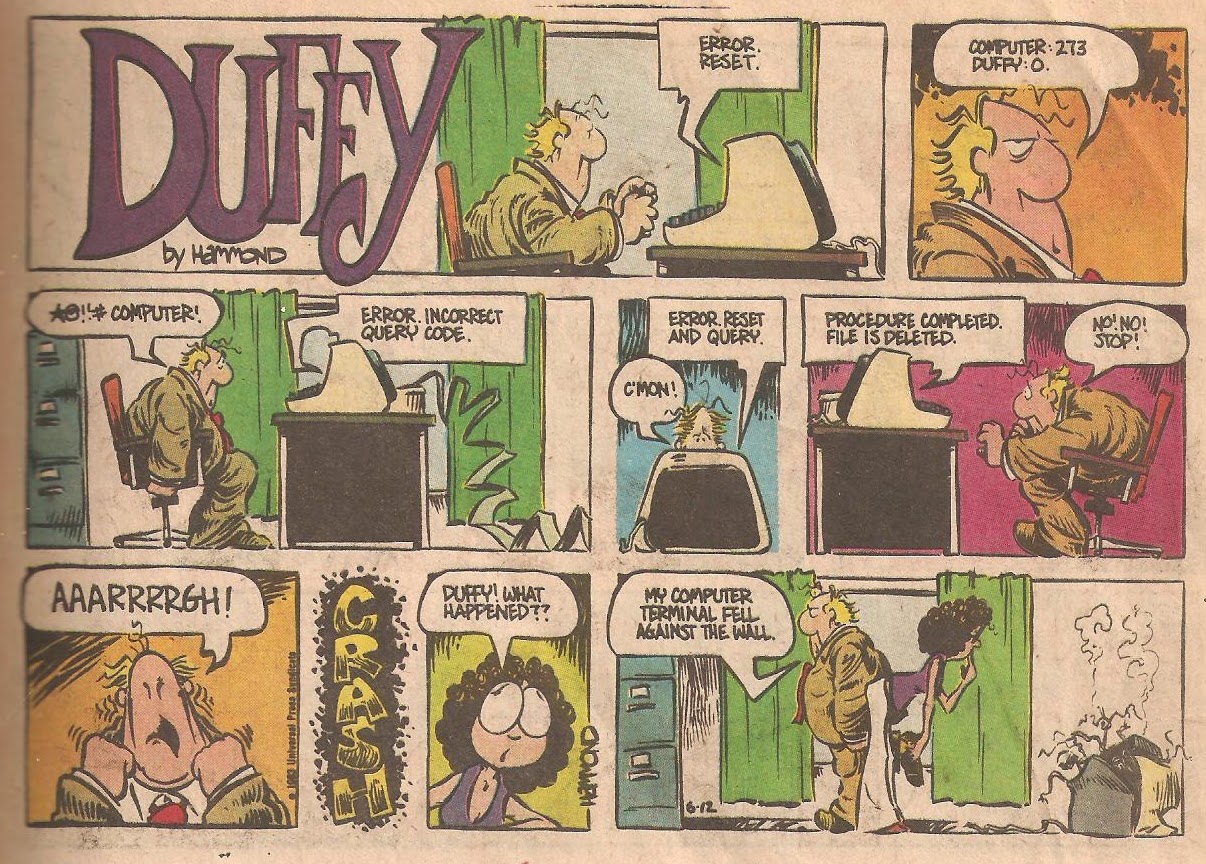 Just remember, computers "falling against the wall" is the technological equivalent of "falling down the stairs into a boxful of doorknobs".  If you suspect someone engaging in mechanical abuse, go see a respectable technician.  There are better ways to vent your frustrations than punching your fist through them, but I'll be damned if I know what they are.
Posted by DeBT at 5:37 PM