This is something of a continuation of my previous entry which focused on panels, but this is something of a subsection in itself, and I felt that entry was getting long enough on its own.  This refers to pages where there's someone talking, but the dialogue is focused in the wrong balloon.

In these cases, these kinds of mistakes are most heavily prevalent in Manga, where the text is more vertically based than horizontal.  In most instances, when deciding to place text down, it's done so in a numerical order, left to right, but depending on the composition of the layout, it may not always be obvious, which can lead to unintended results. 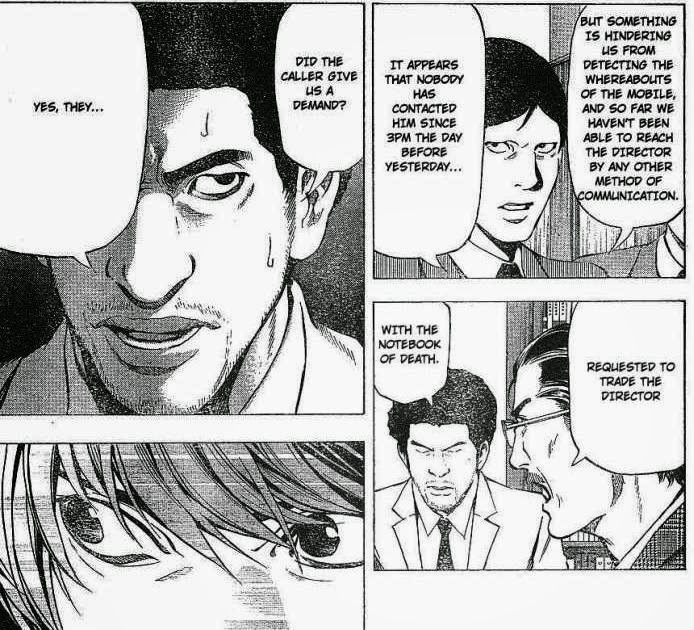 As you can see, the sideway panels in the bottom half screwed the composition up somewhat, because it was slightly different from the norm, and seemed almost normal.  Even so, all the extra space should've been something of a clue, since you typically reserve that for the most dramatic keywords.  This is why I always make a note of having the original page on hand when doing my scanlations so I don't wind up screwing things up.

But sometimes, space isn't always an indicator for important passages.  Even minor casual conversations can wind up falling prey to this kind of thing.  An example comes from Dorohedoro where during an exchange between two kidnappers, the guy who's asking the question about the hostage winds up answering it himself. 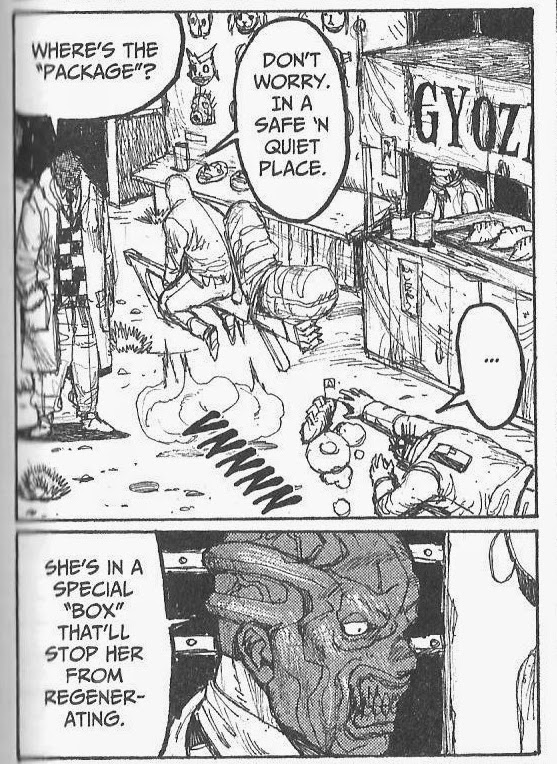 In another instance, when the Crosseyes gang come across a man whose curse reflects any and all assaults back on the attacker, the blonde guy throwing the knives is Ton, which must be terribly confusing, when everybody else calls him that name elsewhere in other books. 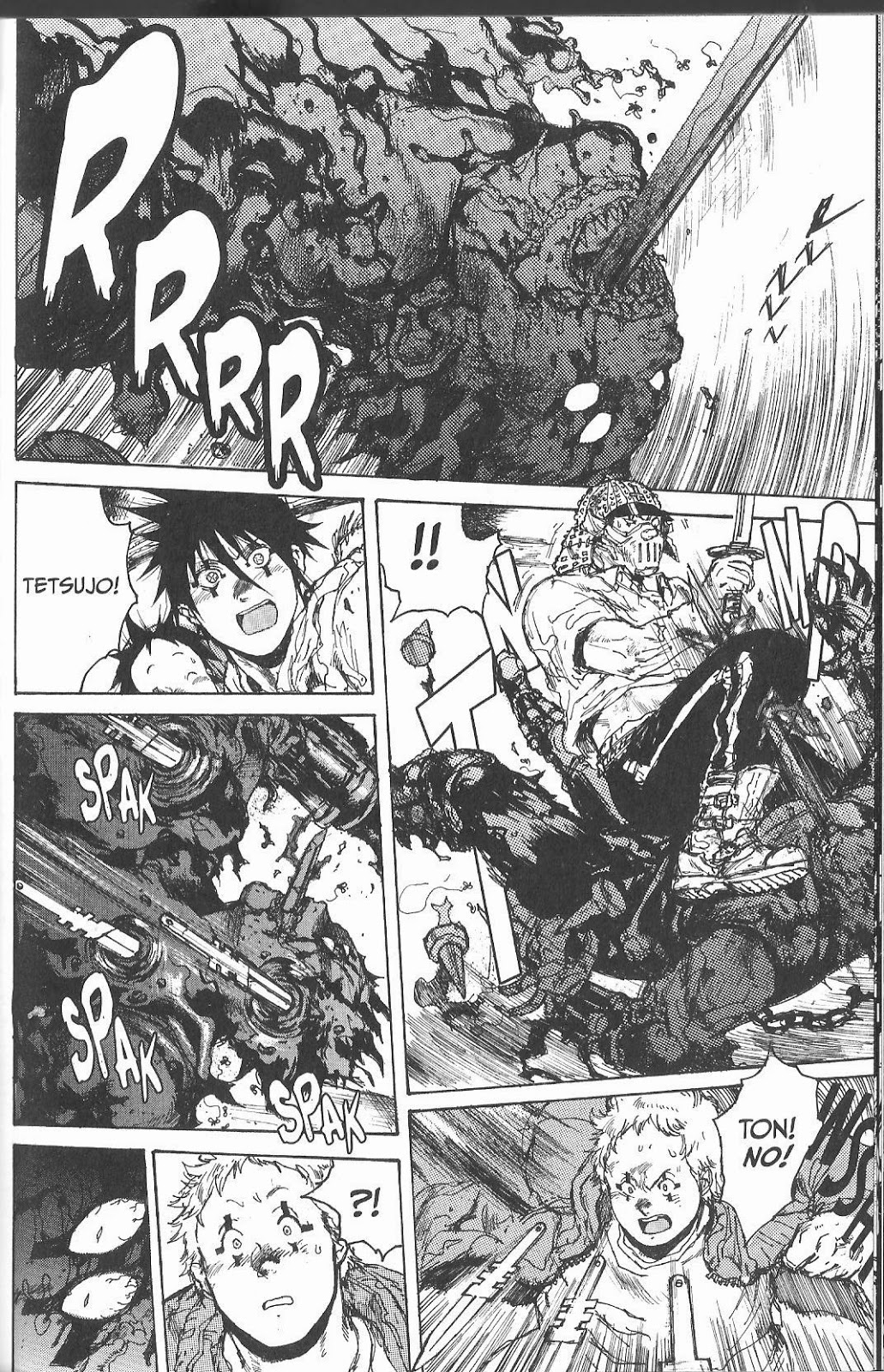 Due to the narrow space for balloons, it's easy to see how the decision to put the text where there would be more room to fit, rather than dividing them up.  On the other end of this spectrum is splitting words to the point where they're impossible to understand. 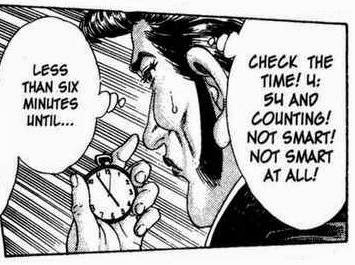 Another minor instance from Battle Royale that always bugged me is where Sho Tsukiya (the blatantly gay student who was left out of the popularity poll in the English version) checking his watch.  The time is divided into two, instead of the natural manner of 4:54.

So far, the most blatant offender of this sin was for The Legend of Zelda: 4 Swords Manga, which had TWO instances of this very mistake on the same page. 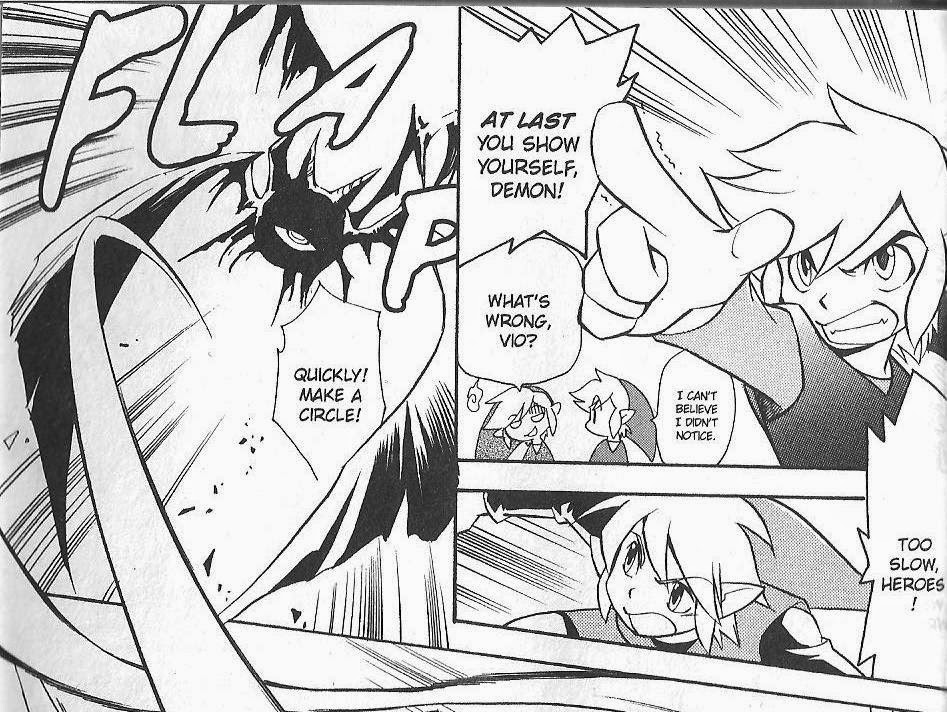 Compared to the earlier scanlation, despite the poor quality, this exchange makes much more sense. 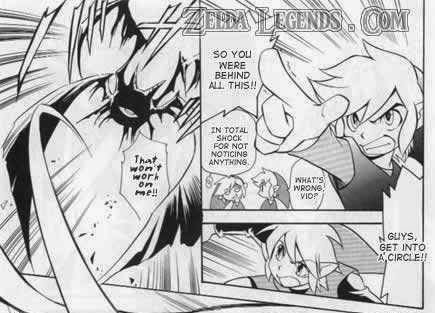 But not all scanlations are considered flawless, and can too fall prey to the same mistakes.  A recent Toriko scanlation wound up being too faithful to its source material, which resulted in confusion, since two of the balloons were closer than the one below. 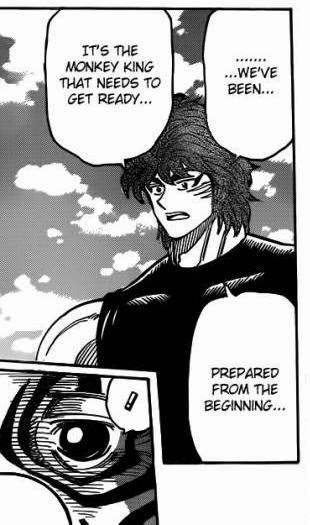 You'd think this kind of thing would only happen in Manga, but other translated titles can be infected with this symptom just as well.  The wonderfully insane Technopriests is a good example.  After passing one of many testing procedures to judge the hacking ability of potential new entries, Albino is being ferried around on his new friend's shoulders.  Yet the balloon cheering Albo on has only one tail, while the questioning balloon has multiple tails, connoting that they're from multiple voices. 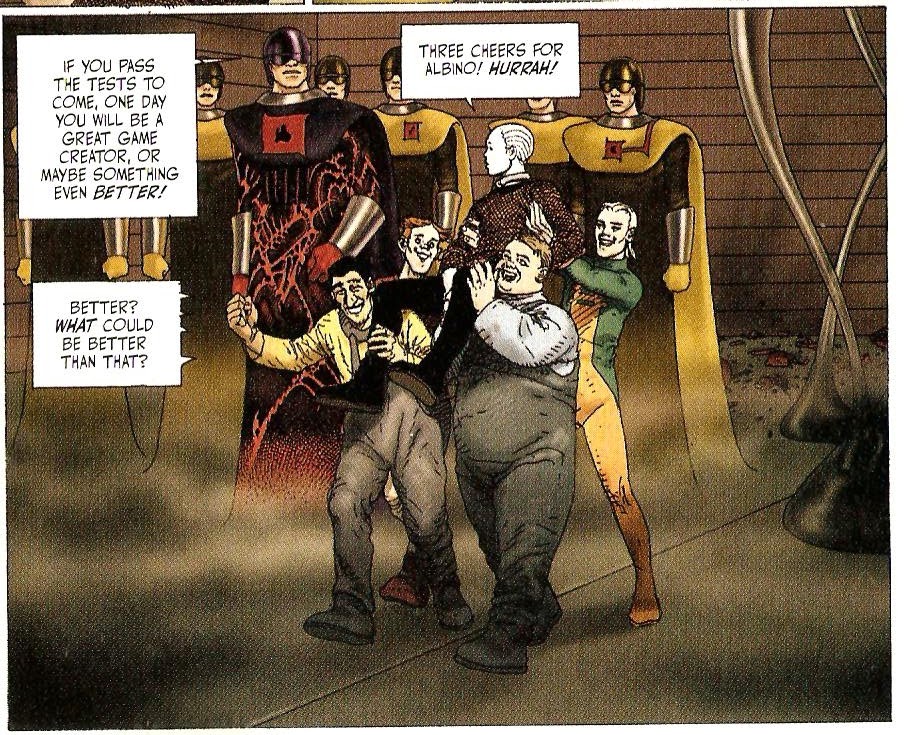 That was a minor example, viable only to the keenest observers, so here's a more overt case.  On a planet where Albino's suffering family is having their madcap adventures of changes to their classes and status quo, usually regulating in one or more members being forced to clean the toilets, they've landed on a barbaric world ruled by a lion-man who makes sport of fighting any potential opposition to his rule and winds up cannibalizing their bodies for food.  This leads to an unintentionally amusing exchange where the ruler, Mongoroy winds up saying his name while biting off a piece of arm meat, while his appreciative audience says YUM! among the cheering crowd.
As long as we're talking about balloons in the wrong place, we might as well talk about another cardinal sin - where words are on the page, but they're not in the right place.  Some comics work off of a text sheet proof that is then later overlayed over the artwork.  And when that proof gets moved around, sometimes, it can lead to amusing instances such as the X-men issue where Wolverine said, 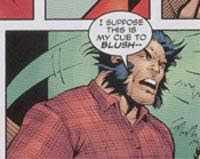 If the page is especially busy, these kinds of slipshod mistakes can be easily found out and complained at length, which can prompt the publisher to do a corrected printing, which based on demand, can cause the previous mistaken printing to rise in potential value.  (This is all deductive reasoning - I take no stock for the validity of these auctions)  Stagger Lee is a great historical retelling of the story behind the origin of a song that, depending on who sung it, was about either a white, or black man.  The black history involved just makes it that more interesting. 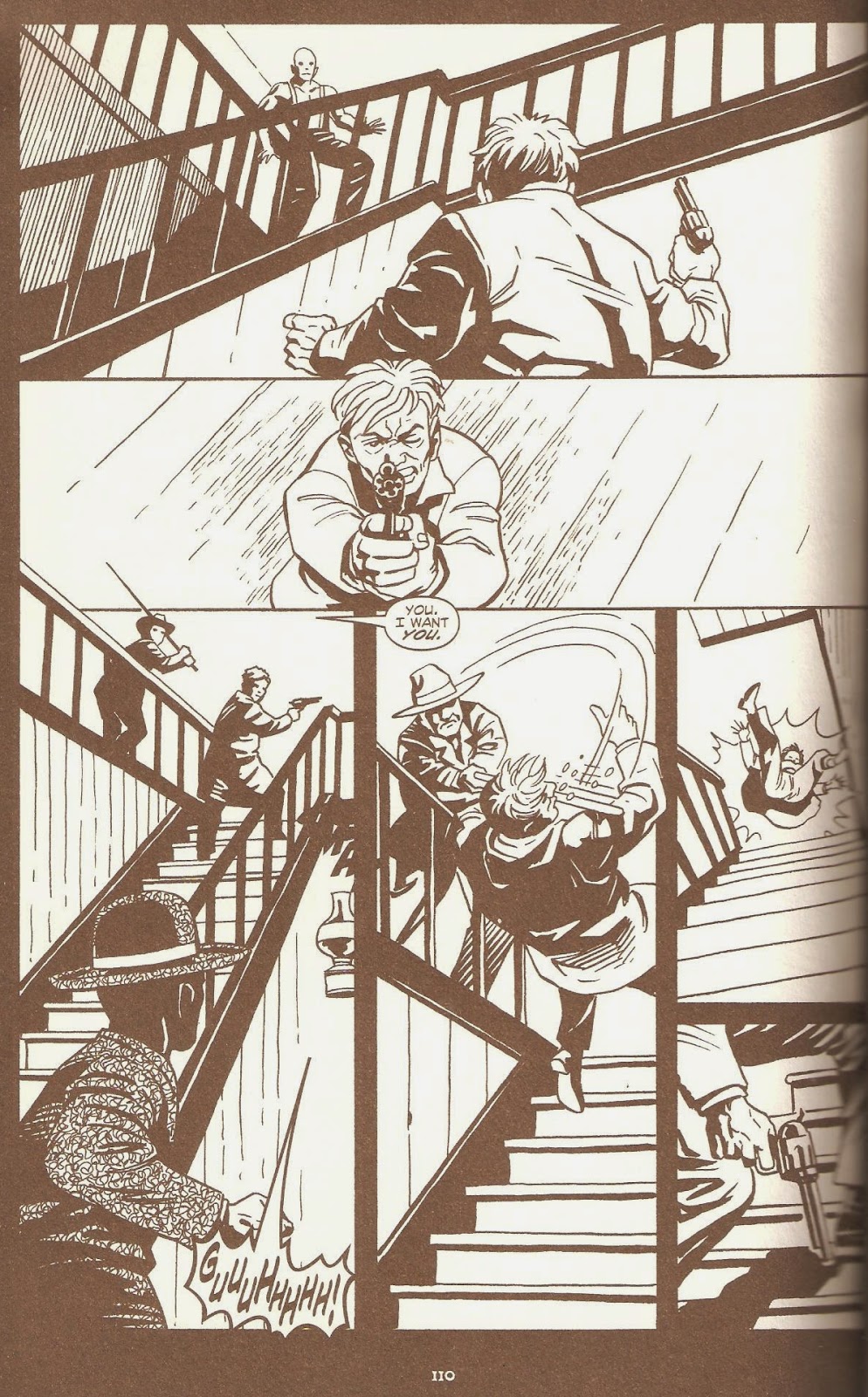 For some reason, the man at the top of the stairs in the 3rd panel is making a threat, while the lamp appears to be screaming out in pain.  According to the publisher, the page looked fine in the letterer's proofs, but somehow all the text slipped down and to the left in the print files.  At the time, it was lucky that it happened to a page with so little dialogue.  If it had happened to a page with more dialogue, it's more likely it would have been spotted. 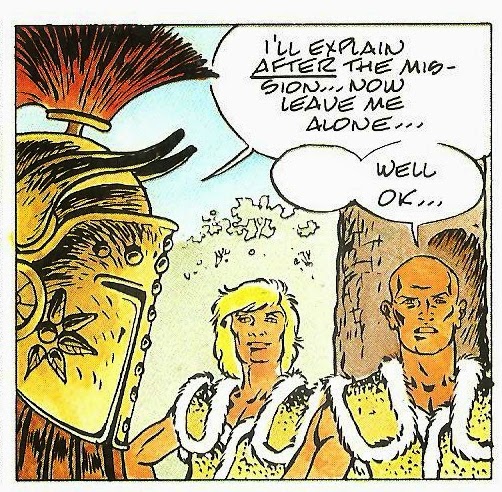 Another instance is where words are bunched together, rather than spaced apart.  This panel from Aria where a soldier responds should've been "Well... OK...", split into two balloons instead of squeezed into one.   This is a good indicator for testing the quality of a release.  If all the text on a balloon is heavily slanted to the left or right, instead of being centered, that's a sure sign of laziness. 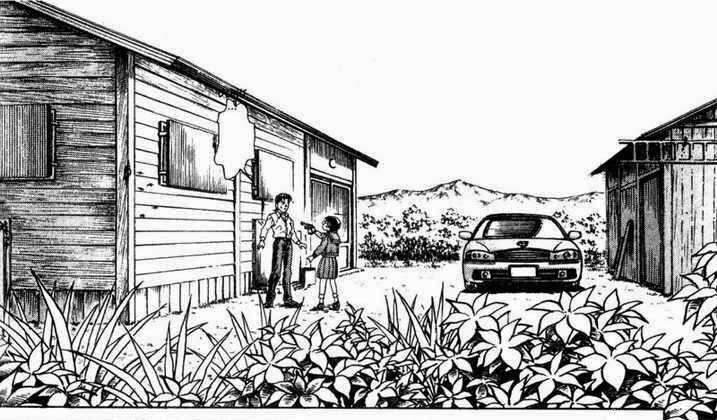 Then there are instances where you're lucky if the words manage to fit within the confines of the extra-large balloon.  You can barely make it out, but if you look alongside the roof above the balloon, Shuya Nanahara is trying to say "Don't..." to the classmate pointing a gun at him.  It's a wonder the rest of the text managed to stay legible on the same page.

Sometimes overlapping text can be the result of reusing a pre-existing script that wasn't entirely wiped clean.
Here's the last panel of page 97 from the 8th Dorohedoro volume. 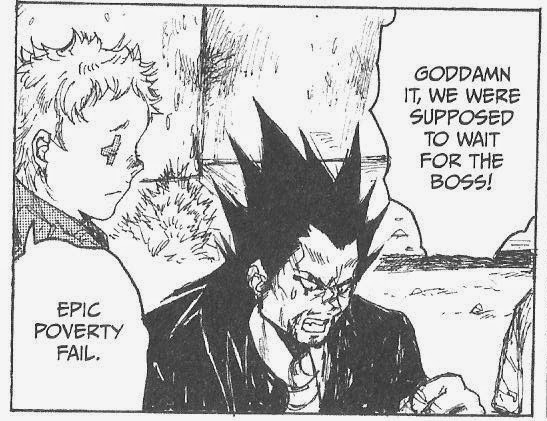 Nothing terribly wrong there, right?  What's there to complain about?  Now, here's the same numbered page for the 9th volume.  If you take a close look at Asu's leg (the wounded skinless guy), you'll see "Epic Poverty Fail" visible there. 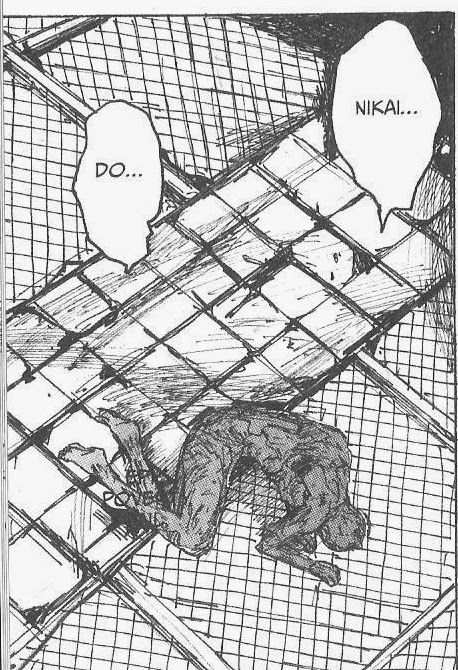 As you can see, the placement and decision on where to put your words can make all the difference. 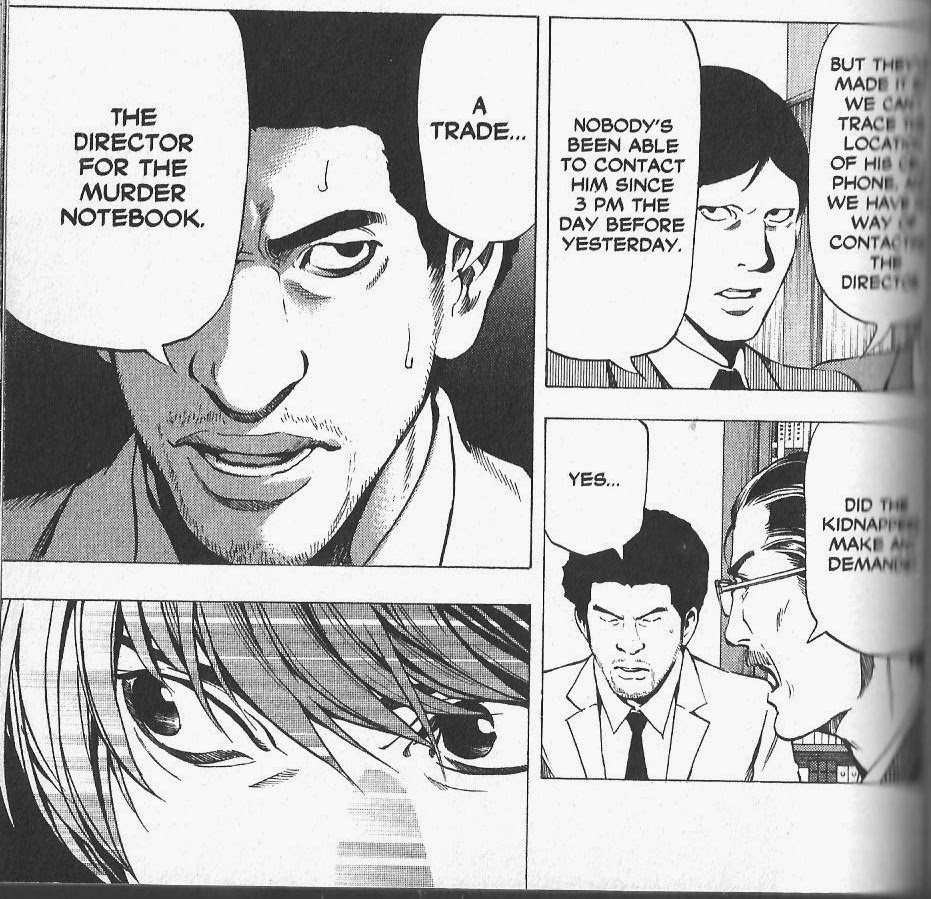