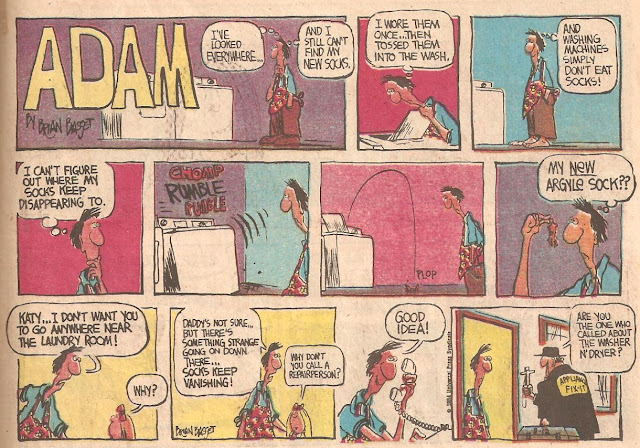 For most of the early years, househusband Adam had to deal with teasing barbs from his chauvinistic neighbor, Walter, who demeaned his masculinity by daring to stay at home and do "woman's work".  (I might do another post about the man sometime in the future)  But for me, his rival will always be associated with the occasional appearances of his most loathed chore: his washing machine. 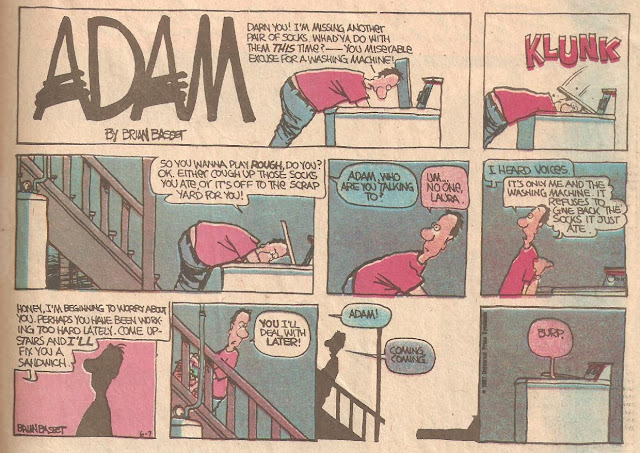 It's long been an urban legend that washing machines eat socks resulting in mismatching pairs, and in Adam, this myth was taken to absurd limits.  Most likely, this was the result of Adam dealing with a tedious project on a weekly basis, and letting his imagination would run wild.  The resulting conflict between man and machine led to instances where he was the only witness to the washing machine's misdemeanors, and oftentimes comes off looking crazy to anybody he tries to explains the robotic crimes to.  It's basically a mechanical version of Garfield strips with the fat cat's internal dialogue removed. 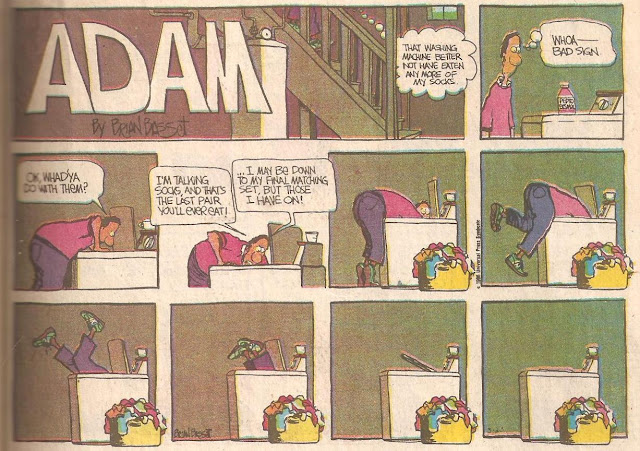 Given how much Adam loathes doing household chores, it's not much of a surprise that he would have nightmares involving the machine.  Not bad for an opponent that never even talks back.

Oftentimes, Adam has to resort to outright threats in order to get the machine working properly, much like in the same way that Zaphod Beeblebrox threatened the Heart of Gold with the binary equivalent of "Blood... blood... blood..."  In these cases, taking the HAL lobotomy route is the only language these devices understand.  That still doesn't stop them from malfunctioning though.  Consider it their form of payback from kicking their undersides all the time. 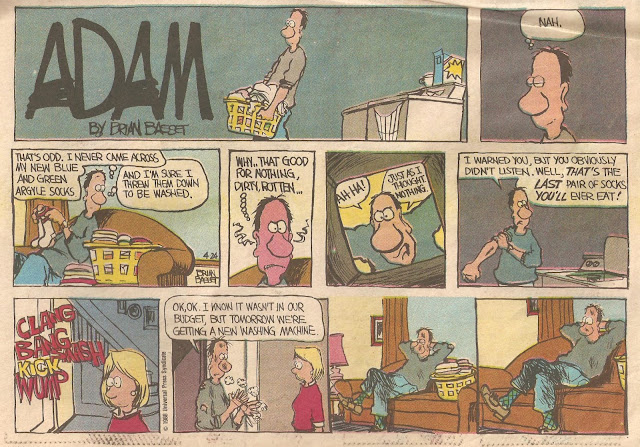 While this could be considered a simple mistake, there's unintentional undertones hinted at from the washing machine's malicious grin in the first panel.  If you check out the throwaway panel in the first strip, you'll see that Adam's socks have been somehow snatched off without his knowledge.  And this is a machine that's known for holding socks in reserve until good and ready.  So - a case of mistaken wardrobe malfunction or a malicious appliance that intentionally switched socks without the owner being the wiser?  You be the judge.