Around this time of year, its traditional for cartoonists to take the opportunity to have their characters observe the triumvirate of year-ending holidays, Halloween, Thanksgiving and Christmas. (And to a lesser extent, the New Year) However, since there's a delay of six weeks before these comics are printed, they're planned in advance long before the holiday season. When they're sketched, inked and drawn outside of their respective months, it can be schizophrenic to the cartoonist if they're not in the festival mood already. Lately, some artists have even rebelled against the system by refusing to do any holiday-themed strips and just focus on the characters and story and not bother with the timetables.

With that in mind, the Family Circus had the following Sunday comic: 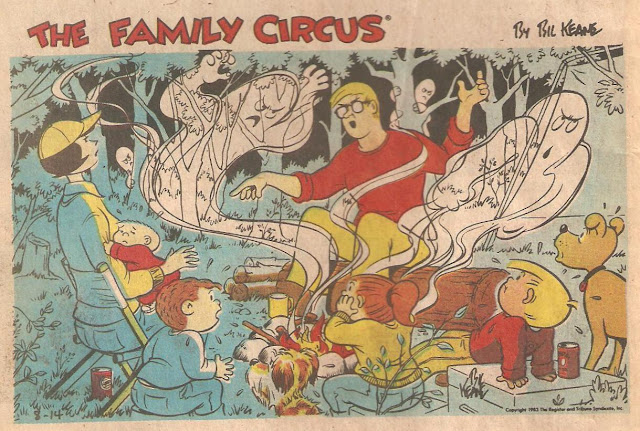 It merely consists of the father sitting around the campfire and telling horrifying stories that're scaring his children. That's the joke. Unless there's something in the throwaway panel to the side that I'm missing, it feels extremely out of place for what's generally known as a typical family-friendly strip. Even the invisible gremlin "Not Me" looks fairly mischievous in comparison.

Next up, Adam regulates a nightmare he had, which sounds pretty horrifying in its own right. 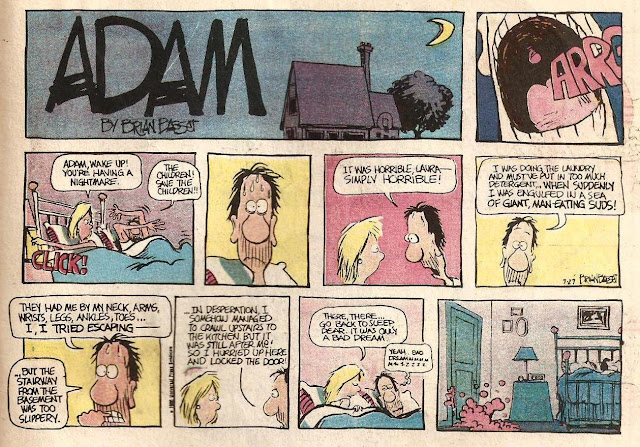 Now, these would be perfectly acceptable comics to be shown around Halloween, right? Only, that's not when they were published. The Family Circus one was shown in August, and Adam in July. Nowhere close to the month of October, and not even a few days later in November when that could've been forgiven for being a little late. It's these kinds of out-of-the-blue strips that make you stop and wonder what was going through these cartoonists' heads at the time.
Posted by DeBT at 2:48 PM