In one of my previous posts, I lamented how there were various pages of minor artwork that for one reason or another, weren't reproduced in the English versions. 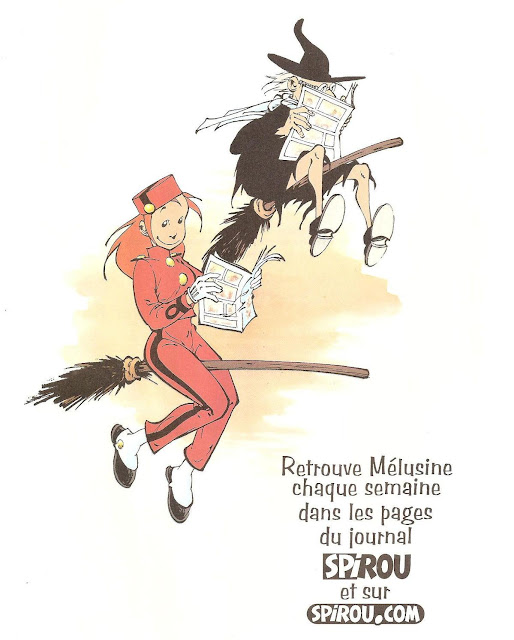 However, what I'd like to focus on is something slightly different.  Here's an example of a two-pager from a gag-based comic, Melusine. 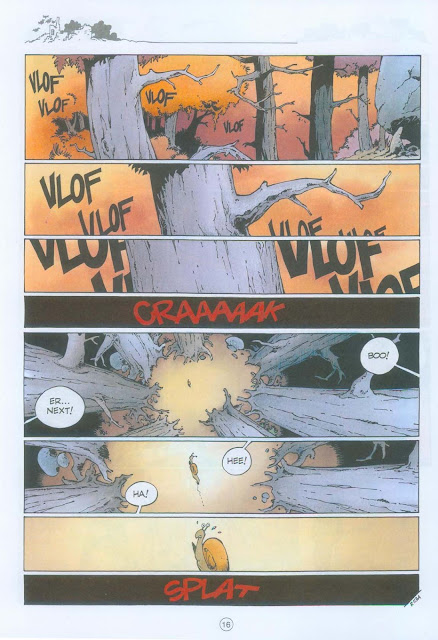 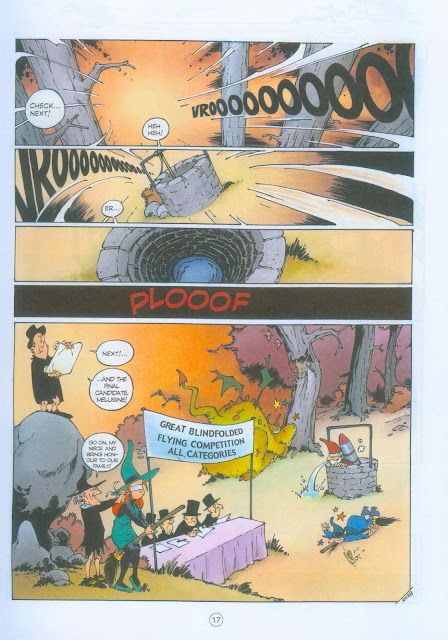 When I first read the Cinebook version, I thought it was censored at first, since they went to the trouble of skipping ahead to the later volumes, because the cute redheaded witch had a tendency to sleep in the buff.  But I went back and checked the original French books, and was surprised to see that it was just like that in the album, even though it was different in the magazine. 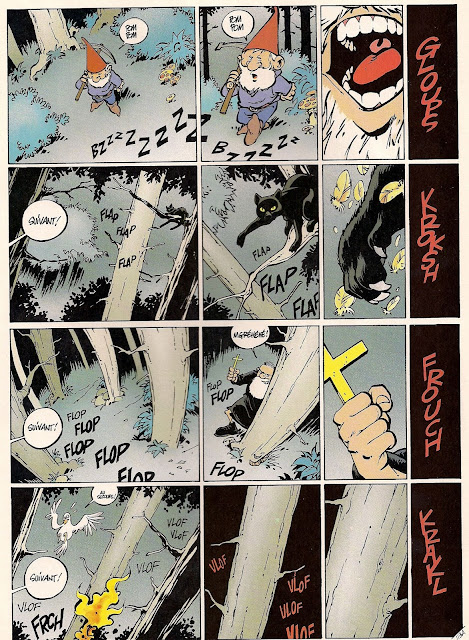 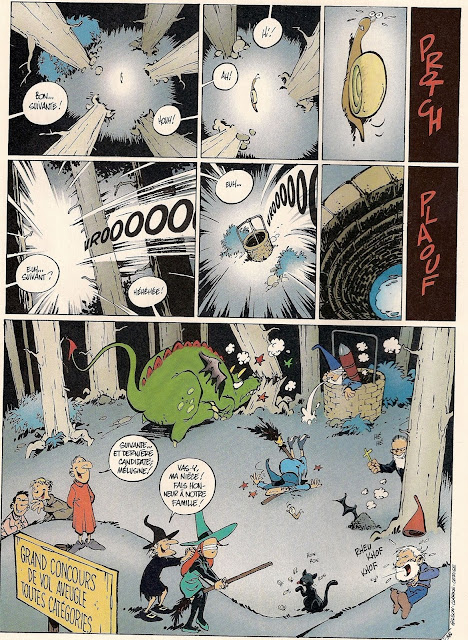 By sheer chance, I had the very issue this appeared in, and knew something was off, because it "sounded" different visually.  Just why the other contestants were omitted and the last page expanded to twice its length is something that escapes me entirely.  This isn't the only exception.  There are other instances where a page is modified to reasonable expectations.  In Papercutz's book, Apprentice Smurf, the ending had a random Smurf chasing a butterfly. 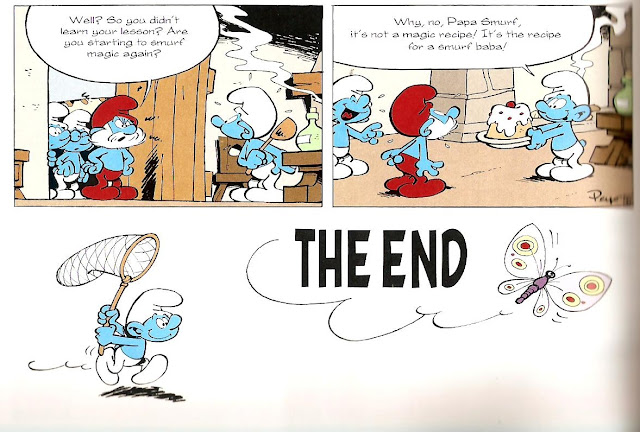 But in the original, below the panel, there were some runic scripture of a Smurfic nature.  Chances are this was considered too difficult or obscure to photoshop properly, and so they went with something lighter. 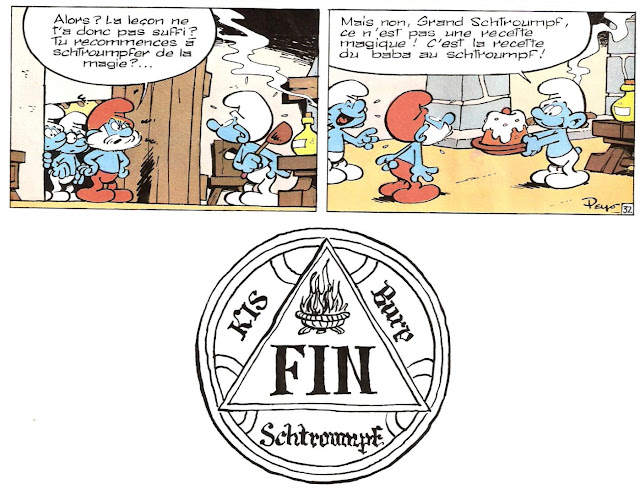 While the Smurfs are essentially a children's property, they're never better than when they're sophisticated satirical takes on society as a whole.  In the Simpsons' 1st season, they were represented via expys in The Happy Little Elves.  While the concept of banal animation was abandoned in favor of Itchy & Scratchy, I kind of lamented that Bart and Lisa would never get a chance to read the comics the Elves originally came from, and be surprised at how dark and mature the original stuff was, and how the show greatly watered down the majority of its commentary plots.  But that's just a pipe dream.

In the latest Smurf book, Smurf Soup, the backup story The Clockwork Smurf (a revised title that I actually approve, given the Medieval setting) has this single page title... 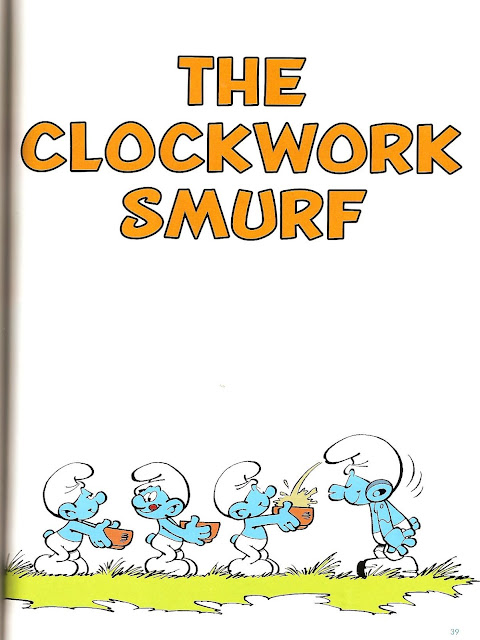 Which is just a condensed version of this widely blank double-page spread. 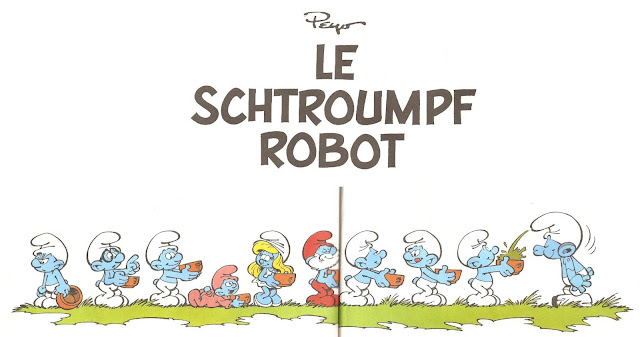 Upon reflection, it could be considered creative editing so as not to prematurely show Baby Smurf, who'd be the main focus of the next book.  But that can't be, because Baby Smurf is clearly visible at the bottom of the second panel of the first page here. That's what comes out of reprinting the Smurf volumes out of chronological order.  In this scene, we see Handy Smurf complaining about being constantly distracted by menial tasks while he could be focused on doing more productive work.  (We've all been there)  With this innocuous suggestion, he sets to work all night long on a Smurfoid that'll do all his boring duties for him.  Right away, it doesn't seem to work, but after some self-programming, it fixes whatever glitches and bugs its creator failed to catch the first time around, and goes about cheerfully doing it's programmed duties.  Not a bad start for a first attempt at A.I. programming. 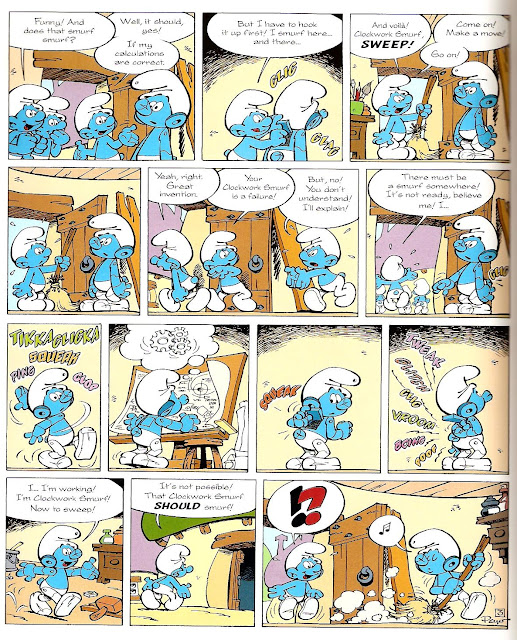 But Handy Smurf shouldn't feel too proud of his accomplishment, because Gargamel manages to create an evil robot duplicate.  Out of clay, no less.  It should be pointed out that Gargamel has more success in creating artificial Smurfs than actually capturing Smurfs.  Smurfette, Clockwork Smurf, and even himself.  Given that his alchemy recipe for gold calls for a Smurf, you'd think he'd save himself the trouble by making one for personal use, unless the recipe needs an actual Smurf, and not a hastily created copy.  Chances are that he's more interested in getting revenge on the Smurfs for slighting him, even though every attempt he's taken has further reduced him to a pathetic villain.

What was left out when the village went back to normal was a potentially unsettling epilogue: 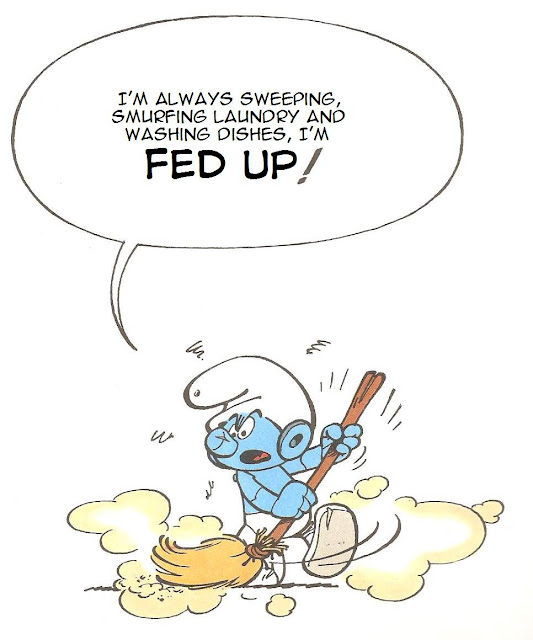 To recap, Handy Smurf created a mechanical Smurf overnight that not only figured out what was wrong with itself, but also managed to develop emotions and a personality.  And now that it's doing the task it's been programmed for, it's starting to rebel against its orders.  This setup has Terminator warning signs flashing everywhere, but don't worry - like all technological Out-of-Place Artifacts, the Clockwork Smurf never appears again after this.

As long as we're talking about Smurfs, I might as well point out another quotation mistake.  Here, where Gargamel is trying to appeal to Bigmouth's hungry nature by selling him on a delicious meal, he's just basically repeating Bigmouth's question before he has a chance to answer.  In the original French middle panel, he says "SMURF SOUP!", which leads to Bigmouth asking what it's made out of.  Three guesses what the secret ingredient is.

Posy Simmonds first made her mark on the comics literary world with her modern-day take of Madame Bovary with her Gemma Bovary, whose cover can be seen front and center in this latest version, displaying her most prominent features. 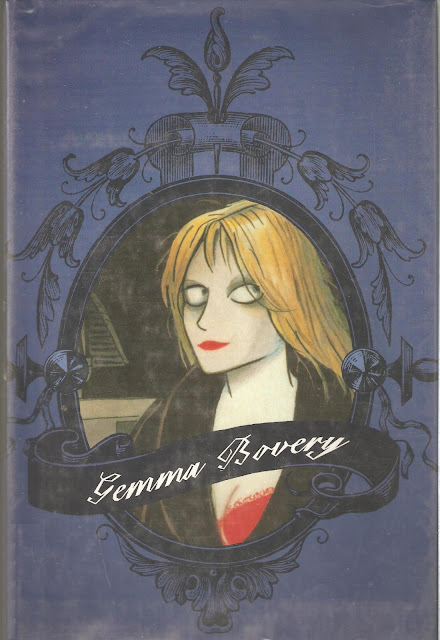 But it lacks the subtle tones of the original cover, which showed not just the scandalous woman out in the countryside, but also the hot water bottle she'd brought alongside her while she wore nothing but lingerie underneath her coat while trysting to her not-so secret lover. 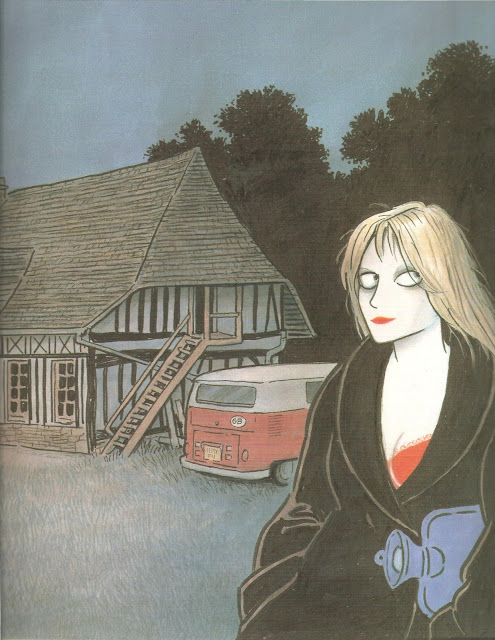 When I heard news that there would be a comprehensive collection of Posy Simmond's early works, I was rather excited because I thought the Posy Omnibus would be a chronological collection of all the work she'd done for the Guardian, since there were several strips that seemed thematically similar, and would've been nice to see the progress of a creeping narrative flow throughout.  Instead, it's just a combination of her past books, minus the front and back covers. Personally, I found the first book, Mrs. Weber's Diary to be the weakest of the bunch, since the comics were divided into double-page spreads with notes in notebook form, such as shopping lists, appointment times and schedules that oftentimes, bore little relation to what was happening on the page, and were very visually distracting.  This isn't made any easier with Mrs. Weber's husband going off into philosophical analytical observations that  defy any logical comprehension.  An example would go as follows: 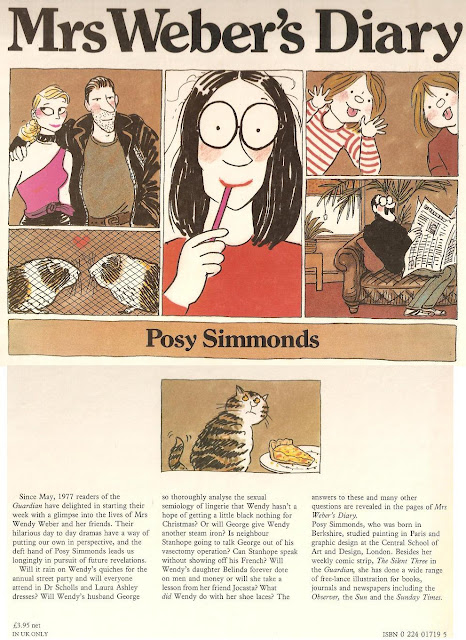 "What astounding insight, Wendy!  We can see it as a transplanar cultural model... the mediator between nature outside & culture inside!  The blind translates the window into a mirror of... attitudes totalisantes, recording our passage from ignorance to enlightenment!"
And that's his positive reaction to the new blind roller pattern.  Can you understand any of the above?  I sure as hell can't.  The only way you'd get to see any of the covers is if you'd managed to buy yourself a copy, and the same goes for the back as well. 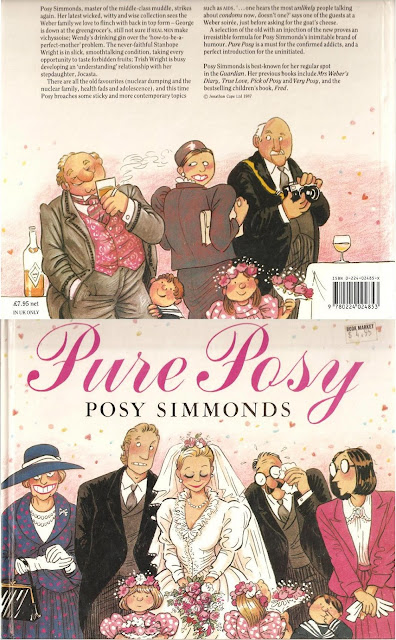 There's the transitional sense you get when you go from the front cover to the titled picture inside.  Without that setup, the intended resonance is lost. 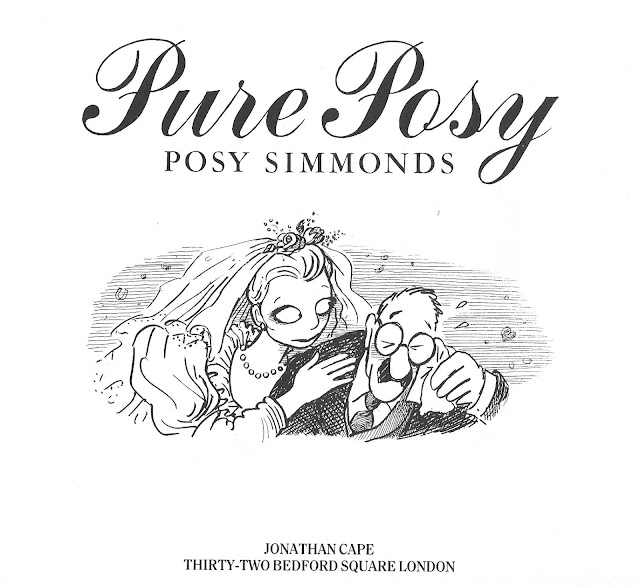 While the majority of the previous comic collections were combined into one neat package, for some reason, this mini comic below was left out entirely.  Since it's a mini-strip that doesn't have any of the main characters (the role would naturally go to Stanhope Wright, who's been shown to engage in these kinds of situations), and isn't particularly funny, it seems like an odd omission.  Whether it fit within the tone of the rest of the book or not is up to debate. 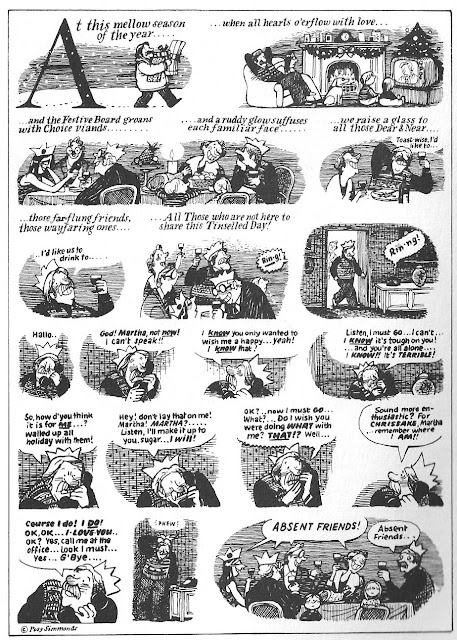 The remaining covers I don't have can be seen in the sidebar of this Posy Simmonds interview. 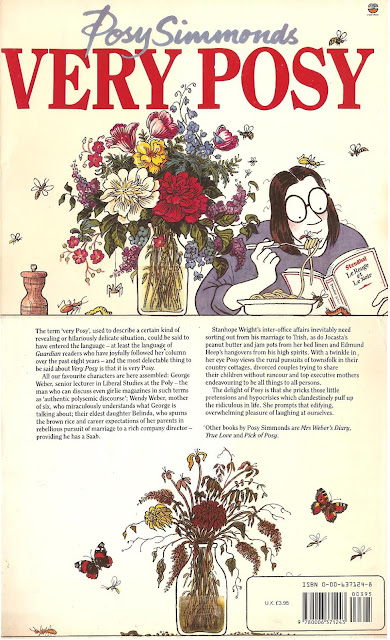