Smells Rotten in the State of Penmarks

It has not been a good week for the library I work at. After going through the surviving documents of our last flooding, we've had another leak from above again. Fortunately, nothing of value was lost, since as soon as a drip was noticed, all surrounding materials were quickly wrapped in garbage bags to prevent further rusting. Rather than the pipes, there's some suspicion that the roof might be the heart of the overhead woes.

One recent preservation activity that I applaud is trimming down some books that only had the edges of their pages affected by the water cut off, since the infected material was blank, and it would be a waste to throw the baby out with the bathwater. In addition, there were odor eaters placed at random intervals in the basement to eliminate the onset of mold. However, these filters were smellier than the surrounding batch of ruined books to such an extent that they were acting up my allergies. What we need is an odor-eater for the odor-eaters. 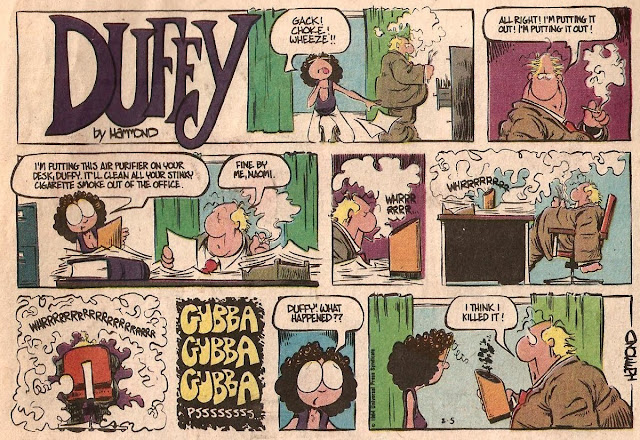 I'm quite sensitive when it comes to strong smells. Popular stimulants such as cigarettes and coffee are anathema to me. I'm not like most people who need a jolt of something to wake them up in the morning - just the fact that I've overslept is enough to send me into a heightened state of panic that'll override all my other needs, such as eating, reading the paper, checking out my daily links, and cleaning up. Chocolate is all the stimulant I need. (Well that, and addictive V-games, good books, comics, TV shows, movies... but that's besides the point)

When I catch a whiff of anything resembling smoke, I react like a wild animal in the midst of a forest fire by looking around in all directions trying to pinpoint the source of the blaze, and have to suppress every cell in my body instinctively screaming to get the hell outta here. This usually happens while waiting in bus lines, and I'm stuck between the desire to move away from the offending smell, and not wanting to lose my spot in line. Usually I compensate by covering my nose with my shirt collar, so I look like a cheap ninja. It says something that I'd prefer to smell my own body fluids than the alternative.

But it's not just limited to coffee & cigs. I'm also affected by strong smells as well. Perfume drives me up the wall, and when cleaning up, I can't tolerate household cleaners. I have to content myself with using baking powder as a cleanser. Apparently, it's a good solvent, who knew? Also, when one of my sister's friends came home smelling of marijuana (I'm not naming names), the cannabis which is normally supposed to invoke an air of calm and serenity actually made me feel more agitated and hyper than anything. It also made me lose my appetite, which is in direct contrast to its promised effects. 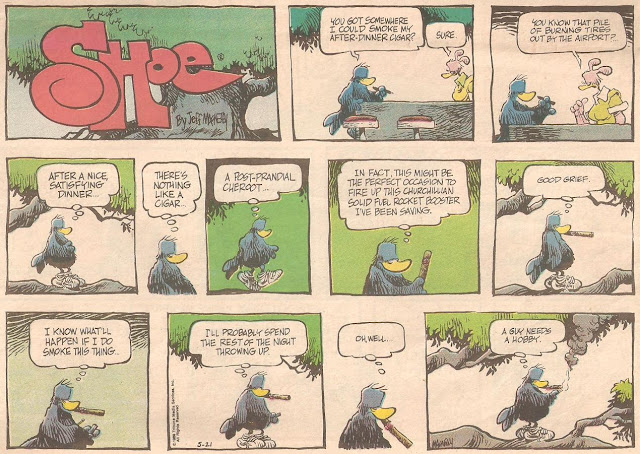 Then there's my revulsion to a certain innocuous smell that's a pretty common ingredient in gum. Just replace the letter 'L' for the offending material Fat Tony hates with the letter 'M' here, and you'll have a pretty close idea for how I feel. 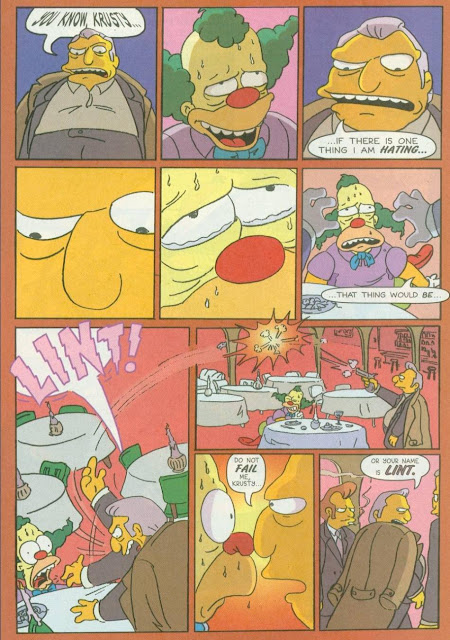 For years, I always secretly hated a relative's cousin because she always smoked in her apartment, and it didn't help that there wasn't any entertaining distractions, such as TV or readable books. The only comics she had were old copies of Andy Cap, which weren't my kind of thing, and despite the food, I always felt cramped around the dinner table. So when she finally quit years ago after seeing a friend of hers with lung cancer (despite all my convincing arguments to stop smoking for health reasons - i.e. mine) I was suddenly struck with the realization that I had no idea how to approach her. I'd carried the loathing burden of hating her habit for so long I was unable to reconcile her separate from her defining trait. 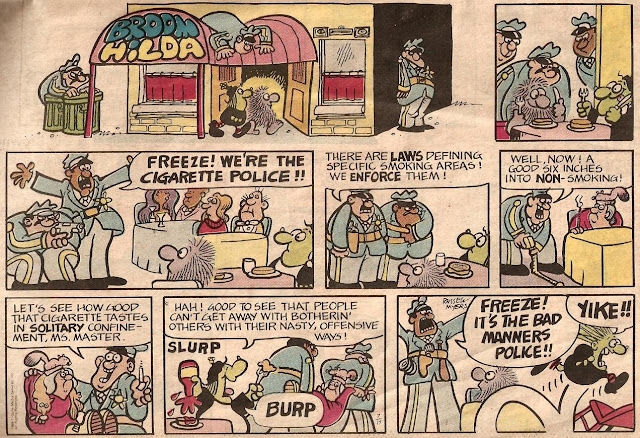 If you're noticing a certain common thread through these comics, it's that they all at one time or another, engaged in smoking habits. Early on, when their distribution numbers were still struggling for an audience, they could engage in these kinds of atrocities, but once they became popular, these harmful influences had to be dropped. The only exception would be Shoe, but the blue purple martin was no longer the main character, similar to how The Wizard in The Wizard of Id was supplanted by the King of Id. Somehow, a Cigar is deemed more respectable than a cigarette, even though it probably smells twice as bad. (My assumptions - I've never dared get close to one of the things, and if I ever was, I blocked the incident from my memory)
Posted by DeBT at 12:00 PM