It's no great secret that I'm a compulsive keeper of my childhood stuff. I've still got the sketchbooks full of notes about elementary things I already know. (It's the little touches like the personal notes in the margins that set off memory triggers in me, and recalls long-forgotten old thoughts) The interesting thing was as a baby, I had a hard time showing any fascination for real-life objects, even if they were something I liked. For instance, I greatly enjoyed drinking apple juice, but if you showed me a carton of the stuff, I wouldn't show any interest. But if shown an ad for apples, I would sit up and take notice. Like Madarame of Genshiken fame, I was already attracted to 2-D images before I even read any comics.

When I see these familiar items again, I can recall my exact thought process at the time, and what I was thinking when these events happened. Since I don't keep a journal, these daily events are the closest thing to someone recording my life. The ironic thing is that while I'm extremely observant of events that happen to other people, I'm essentially blind to what happens to me. I need a ghostwriter to do my biography, because I'm crap at self-describing anything that's not emotionally relevant.

Over time, when it became fashionable to "put away childish things", I did so safe in the assumption that they were safe in my memory, and no one else would find interesting; only to later regret tossing out or giving away certain items that're no longer available and hard to find nowadays. Items such as most of the McDonaldLand Fun Times, a pamphlet of aliens Binky and Donnel (Blinky and Donnell?) with Snuff the Wonder Dog on the warning labels of household items, and an educational book featuring anthromorphic representation of phone numbers Operator and 911 in the form of an undercover agent, and a telephone slinky cord with a funny hat. It was available in both English and French, and there were dancing pineapples, both the result of mishearing a request for a telephone book (Telephone booth versus Ananas). If anybody out there has any idea of what I'm talking about, please let me know - I'll be eternally grateful.

One of these cherished childhood items I've kept all these years is a Road Runner (& Coyote) Dots & Mazes book. I used to act out repetitive fantasies where I was either the Road Runner or Asterix the Gaul, and doing the same task of outrunning the competition or bashing up a Roman without any consequences. My opponent had to be very good sport about this persistant typecast role, since unlike Mario as Sherrif and Wario as bandit, I never changed my roles once. 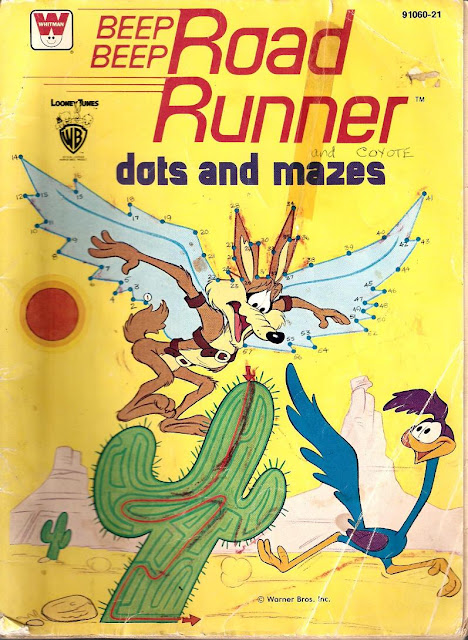 To get an idea of how much I liked this book, even though I'd already solved the puzzles the first time around, I continued to "redo" the mazes and connect-the-dots puzzles again and again, always using the same red crayon. When I ran out of mazes to redo, I completed the answered ones at the back. And when I was done with those, I added motion lines to pictures that didn't have any. 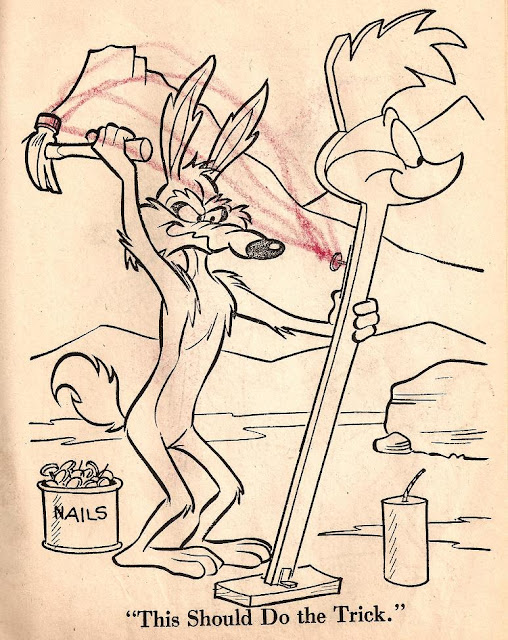 They were so full of such wildly imaginative and detailed drawings that I didn't ever want it to stop. However, due to a certain obsessiveness of mine, like Homer Simpson constantly failing his children's mat fun pages, I would insist on redoing some certain mazes over and over until I was able to "do it right". For some reason, I had some extreme difficulty with some of the early puzzles, and missed a tiny turn in one of them, forcing me to redo it over and over until I took the right path. Even if I'd already solved it the first time around, I simply couldn't get past it and move on to the next, knowing that I'd failed in an earlier attempt. The other puzzles (whose patterns I'd easily memorized) didn't present that same level of frustration, so I was constantly frustrated with having to do the same one over and over, and not be able to move on. It was this level of obsession that led me to stop doing the puzzles again. That, and I'd worn the red crayon down to a nub, and couldn't find a suitable replacement. 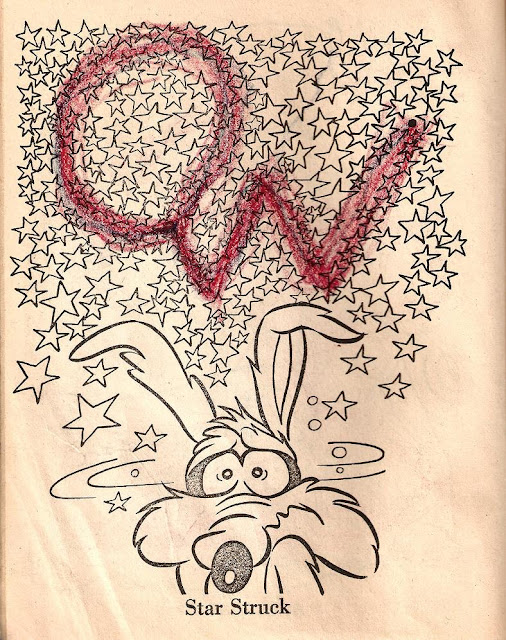 The Road Runners seemed inspired in part by the Walt Whitman / Gold Key comics where the Road Runner family spoke in a rhyming dialect. I only know of this, because of a single Road Runner comic where Wile E. almost succeeded in getting his meal ticket by tiring out the Road Runners by having them participate in a friendly contest against Speedy Gonzales. In short, the representatives of the basic cartoon chase scene were almost brought down by a Mexican rip-off. 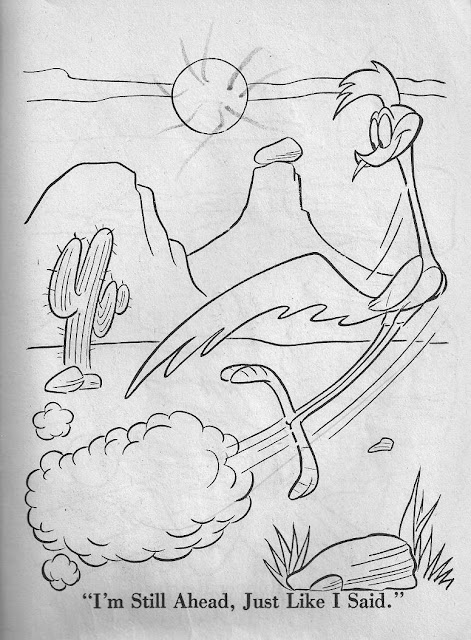 It's difficult to get a sense of sequence from these brief pictures, but there were slight story progressions through all the pages, with the Coyote's attempts to catch the Roadrunner. In fact, the last story had him actually build a maze to trap the Road Runner in, which goes about as well as you'd expect. 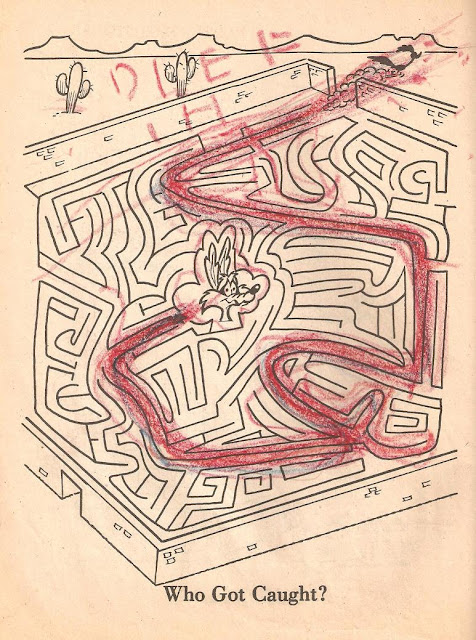 Though there was something in the answers page that perplexed me - the inclusion of two answers that were never in the book in the first place - namely "What is Wile E. Saying?" and "A 'Roof' Landing". My memory is a little vague, but I seem to recall seeing another colouring book in someone else's house that had additional pictures that supplemented some of the other drawings, such as the Coyote holding up a stop sign that the Road Runner breaked at, allowing the Coyote to catch the Road Runner amidst all the dust, only to find out he'd grabbed a cactus instead. 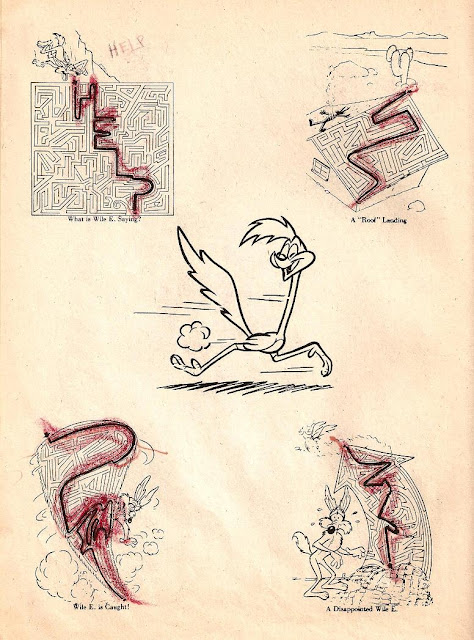 It wouldn't surprise me if some of those pages were borrowed and reused elsewhere, given the quality involved. The unnamed participant of all these nostalgic pictures gave me a lot of enjoyment, and I don't find the same level of quality in today's puzzle books. 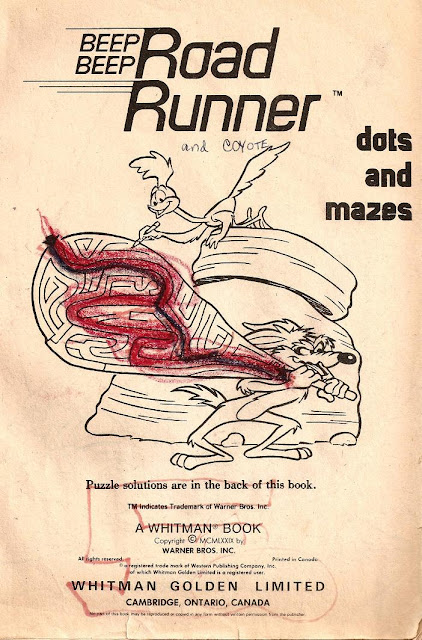 That extra red line besides the black line in the image up there? That's me finding an alternate route, even though there was a more direct shortcut already answered there.
Posted by DeBT at 4:23 AM