There's been a recent request for one of the most ambitious fantasy webcomics available, Goblins, asking their fans to give contributions to their comic via Youtube videos. However, since I'm notoriously shy (and don't know how to upload a video), I'm opting for the alternate option, which is giving a glowing endorsement for the webcomic, even though it won't give me any bonus points in Thunt's (Tarol Hunt's penname) direction.

Recently, Goblins was a regular contender for a TopWebComics popularity contest, that managed to beat out Order of the Stick (the other long-form fantasy webcomic) and was only narrowly defeated by Gunnerkrigg Court. Now, any comic that manages to go runner-up to a "Female Harry Potterverse" is well worthy of a second look, and I'll tell you why.

The comic updates twice a week on Tuesdays / Fridays, though it's more accurate to say that because of certain production delays, it actually updates on Wednesdays / Saturdays. On occasions when the main Goblins story isn't ready, there's informative temporary extras, such as the previous owners of the Axe of Prissan that are only available for a brief period of time before they're taken off the main page. These mini-stories are apparently collected in the e-book collections.

As pointed out on the first page, the series undergoes a significant shift in art evolution before becoming more elaborate and lush today. The early pages are still available in their rough form, even though they've been 'prettified' up in their book releases. 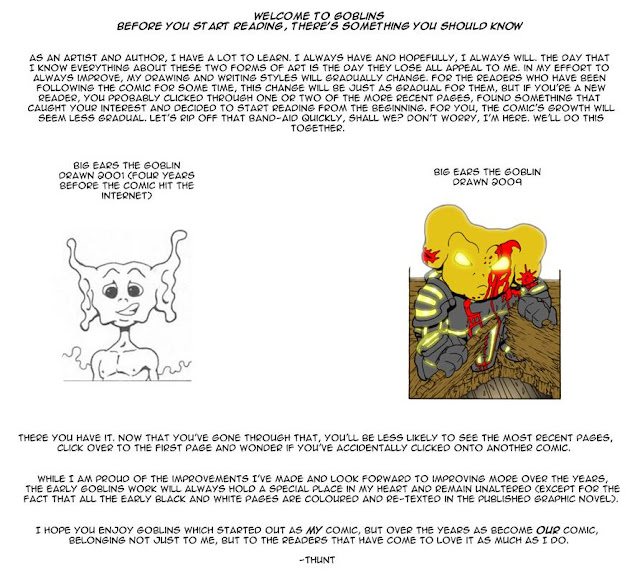 So what is Goblins about? Well, you know how pretty much every RPG has a warm-up level full of easy weak monsters to beat for practice before moving on to the harder levels coming up? Well, this particular Goblin village is the camp of random encounters who've spent their entire lives around defending a poorly guarded treasure chest containing treasure. While it's pointed out that they could make better use of the treasure inside the chest, rather than just mindlessly guarding it, this is actually just a prelude to gradually breaking out of their preconcieved notions of their limited roles. 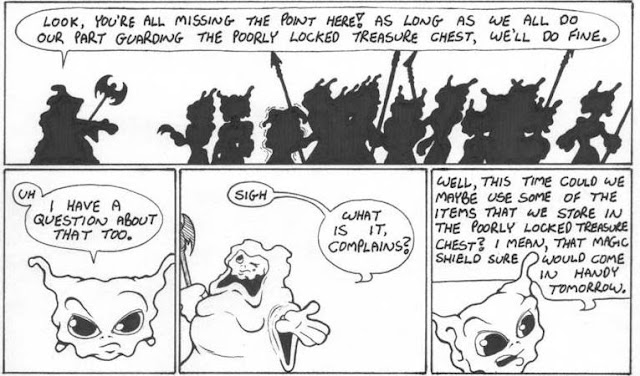 After a large battle where their tribe suffers a stunning defeat by a min-maxing barbarian, an armoured dwarf and a trio of Drows, the remaining survivors figure that it would probably be better if they took adventuring levels themselves so their species wouldn't have to suffer and die out from beginning adventurers. The characters have every opportunity to retreat into easy cliches, but they don't go into quick shortcut territory. There are instances where characters sound real, and wind up surprising you with the rationality of their decisions, even as they're going into the deep end of a screaming match against somebody they disagree with. 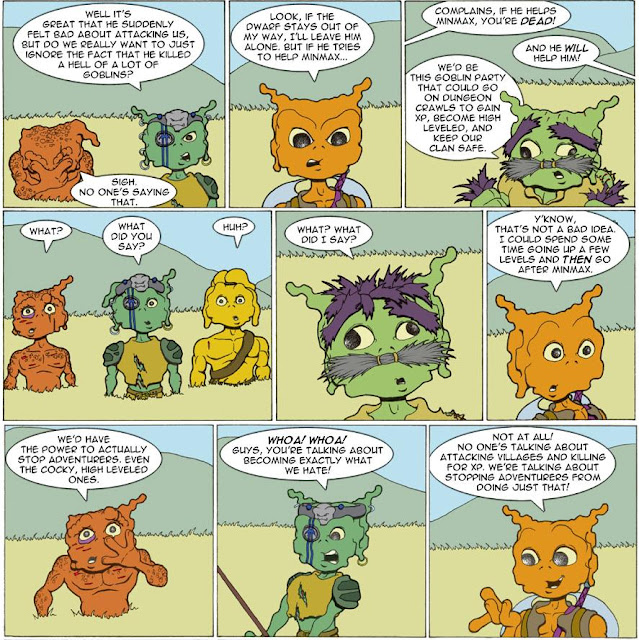 However, their appeals into adventuring hits a snag early on when one of their teammates splits up for personal reasons, and they have to go after him. Even though they're now classed as adventurers, they're still monsters in the eyes of the human population, which leads to certain unfortunate implications. I don't want to reveal too much (I'll leave the joy of discovery up to you), but the end result of the winding path of that voyage leads to a large fight that felt like a distillation of the Ennis Lobby arc. It wasn't exactly inspired by that, but it had the same level of destructive intensity I felt when reading it. Now that's an impressive feat - to emulate One Piece without displaying any overt influence from the Manga itself. 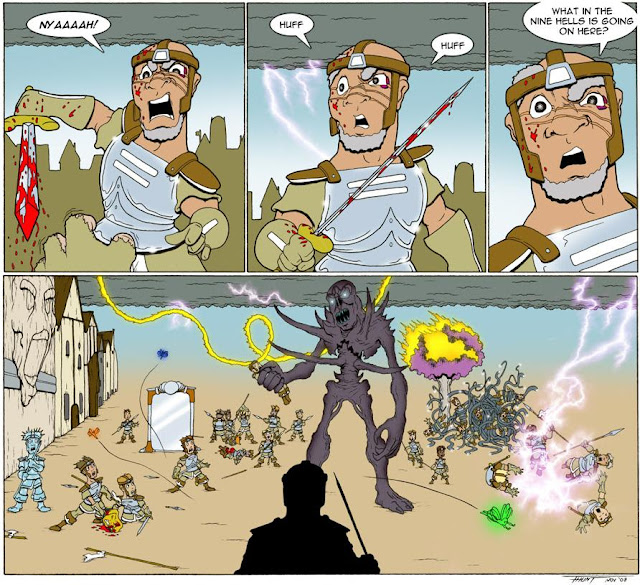 That's another thing about Goblins - there's so much thought and imagination packed into these stories that only becomes evident upon rereading. In particular, a certain prophecy mentioned early on only begins to reveal certain relevancy until MUCH later. Fortunately, the author has the patience to wait however long he wants before these elements come to light. One particular example was a rusty sword and girly armour that Thunt had been waiting seven years to introduce. If the author had such anticipation in presenting
there must be some hidden reservoir of power in them. 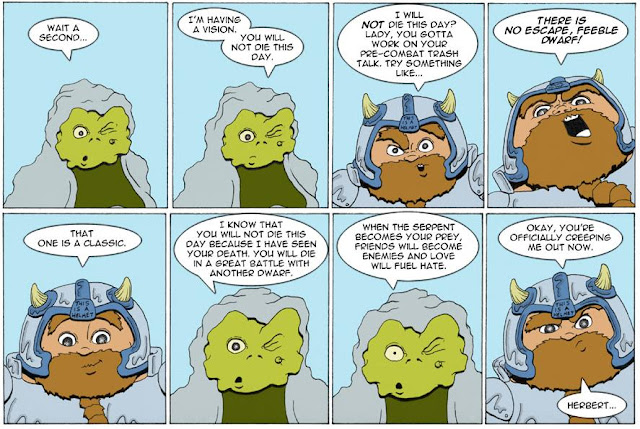 While I mentioned the RPG element early on, Goblins actually plays closer to Dungeons & Dragons style of roleplaying, which explains some of the oddity when some of the Player Characters make references to actually being other people in real life. This plot element seems to have been phased out along with 'Herbert', the sadistic gamemaster who either introduces impossible opponents or overly-easy quests. So the amount of worldbuilding remains fascinating, even as it wallows into text-heavy expositions. As of now, there are three Big Bads involved, each with their own agendas, and remain completely unaware of the other's presence or plans. 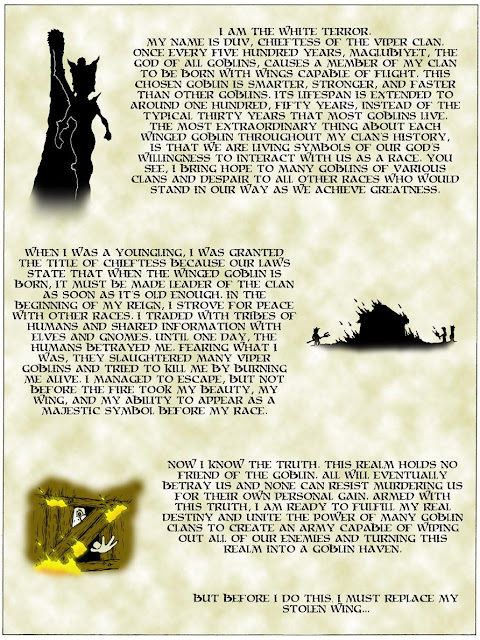 The story remains a compelling read even though they haven't gone back to the main party for over a year by now, and focused on two other sidestories by secondary characters instead.  The worst part is that the main party's been left hanging on a cliffhanger that probably won't get resolved until one of the other sidestories concludes. And considering how long these stories have been going on, it looks like they won't be coming to a natural ending anytime soon. The pain of anticipation is lessened by the strength of the strong writing and art. It doesn't hurt that the Goblins look like a cross between Mogwai and Gremlins. Oh yes, and it's done by a fellow Canadian too.

While the amount of early humour is drowned out by the drama that happens shortly after, the comic has retained its roots by occasionally delving back into laughworthy territory that remains funny long after you're familiar with the punchline.

On the other side of mini-arcs is a sponsor comic where a lone thrill-seeking adventurer Goblin named Tempts Fate goes through a gamut of preordained obstacles in order to meet the goal. All that's needed for him to succeed is for donations to meet the allotted goal of money invested. And so far, Temps Fate has YET to meet his demise in any of his missions. My personal favorite is the fifth mission where he has to go through a dungeon trawl which ends with two 'unpassable' doors. 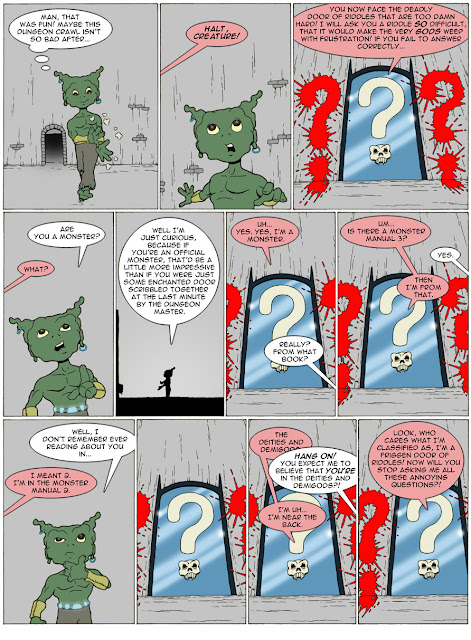 As much incentive as these extra funds allow, the author doesn't take much joy in taking submissions. He teeters between the thin line of wanting to provide entertainment for his fans, and needing enough income to live comfortably. In fact, Thunt felt bad about taking money from his readers just so he could have someplace to live.

Just a slight warning that the latest Temps Fate arc where he goes to hell doesn't seem to be archived correctly, and is sprinkled through the main story at random intervals. New readers would be advised to familiarize themselves with Temps' adventures just in case they blaze through the first three books and beyond, though it's safe to say that at that point, they'd be allowed a reprieve of a breather.
Posted by DeBT at 1:33 PM