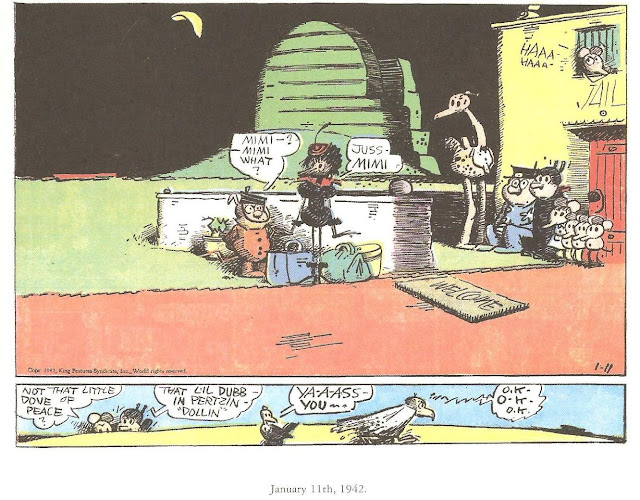 If you're a comics fan, you probably know all about the so-called love triangle in Krazy Kat by now. Typical inverted formula goes as follows: Police dog loves Kat, who loves mouse who hates Kat by throwing bricks at him/her. Kop hates mouse, and tries to intervene, even though Krazy never notices his affections, and mouse throws bricks more to infuritate kop than appease Krazy. However, for brief intervals, there was an extra inclusion to this formula that would throw this whole rigmarole out the window. 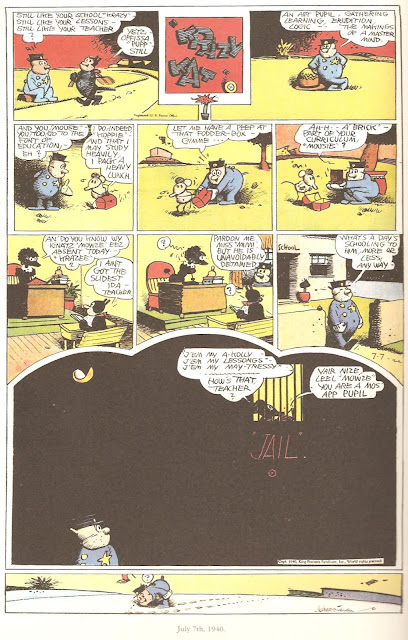 Miss Mimi, the school poodle would teach her French lessons, much to the dismay of the only other feminine icon of KoKonino County, the resident gossip-monger, Mrs. Kwakk Wakk. 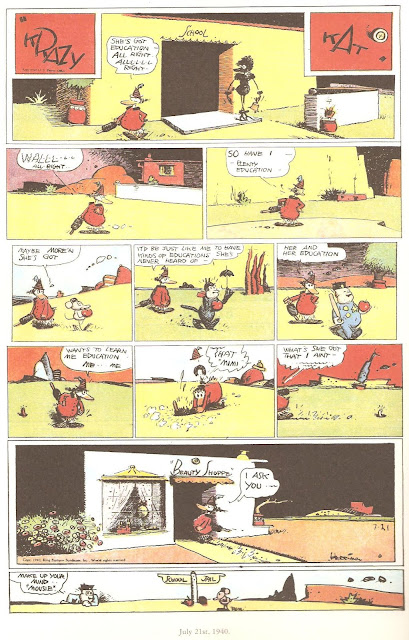 Apparently being openly available and constantly teasing the residents of Coconino County without giving any interest in any of them was considered something of a large scandal back then. Of course, a woman's worth is determined by the man she's with, not by what she does. Also, accepting apples seems to be a symbolic metaphor for something, but damned if I can figure it out. (Usually, it's the male being tempted by a female seductionist) 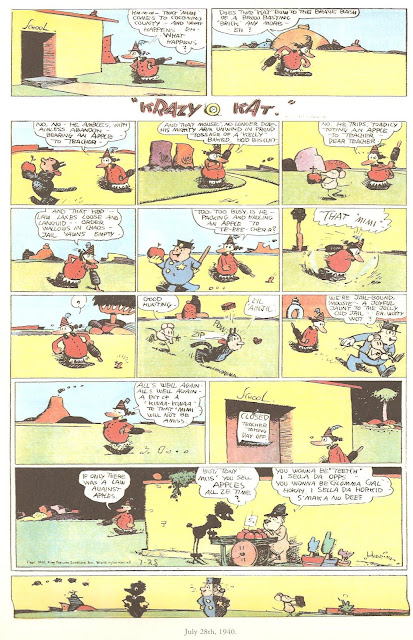 This had the unusual result of Miss Mimi being the sole interest by ALL THREE members of the main cast. This is quite an achievement when usually neither of them can ever agree on anything. Particularly Ignatz who dislikes Krazy simply because the Kat is black. (When Krazy is white, Ignatz is more affectionate, and when Ignatz is black, Krazy is hostile towards the mouse) This area of racial identity has been the lead focus on Herriman's background. 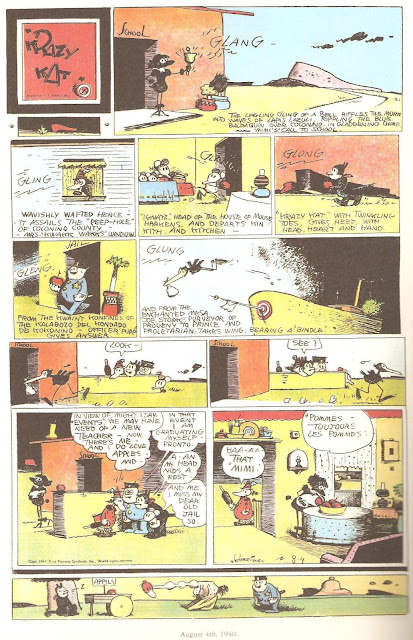 This discrepancy makes this love triangle less of a love quadrilateral and more of a love tetrahedron. All three members of the main casts revolve in their little circle around the base, while they're affectionate towards one target, who doesn't reciprocate in kind. 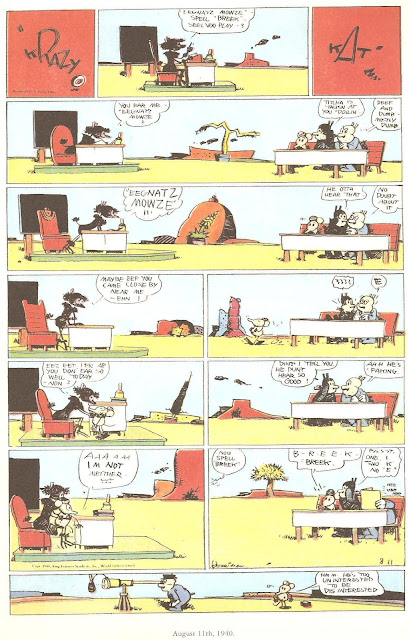 Their mutual attraction towards a solitary female figure would cast further doubts about the relationship between the cat / mouse / dog, and like the Lady Spy, her brief chance in the spotlight was diminished and discarded. Though that didn't stop her from making varied appearances later on. That first image up above? That's from 1942, two years after her first appearance. 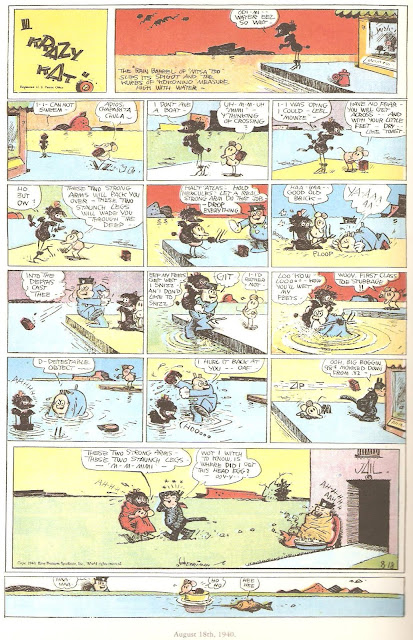 Krazy was the odd man out due to his/her complete devotion to Ignatz, and the Kat was subsequently replaced by Don Kiyote, a more suave charismatic figure worthy of competition. 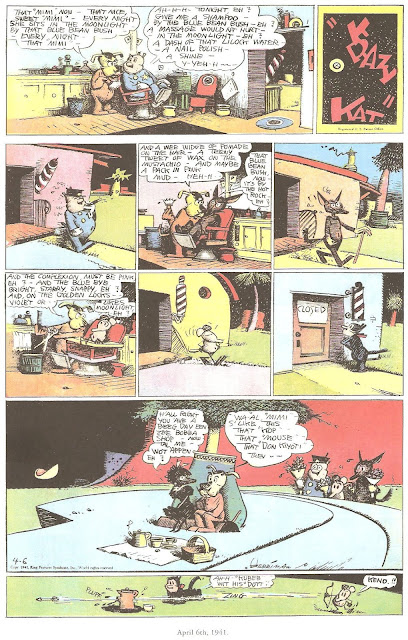 With her pointed nose and diminutive figure, Mimi was probably the earliest example of an attractive French funny animal, predating such archetypes such as Miz Hepzibah and Fifi la Fume. However, due to her obscurity and the source material, it's highly unlikely that there'll ever be any fan art of her. Even the Tijuana Bibles would focus more on Krazy, if any were ever made for that strip in the first place. Furry fandom didn't exist back then. 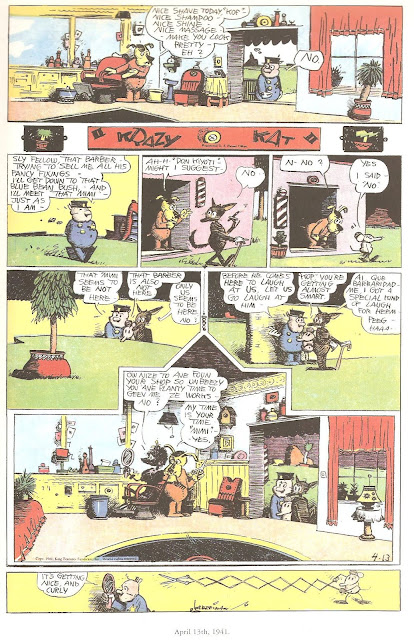