Back at the beginning of this year, (where does the time go?) I approached the announcement of the release of Fantagraphic’s Pogo collection with great reluctance. I was extremely dubious of them ever releasing Walt Kelly’s work, given how often they’d been pushing back their release date. At the time, I vowed that if they actually followed through on their promise, I would show two Pogo comic shorts that were an obvious influence on Calvin & Hobbes. 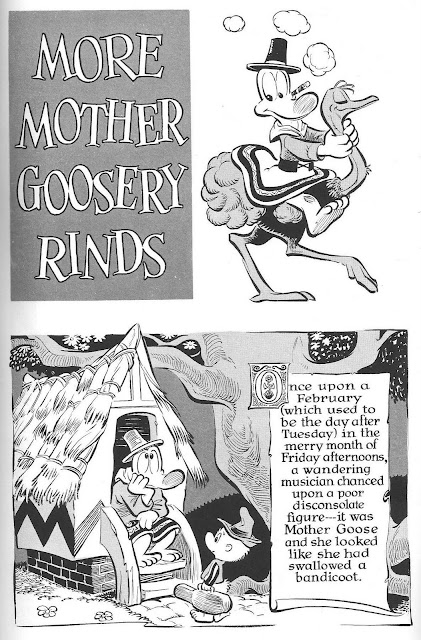 When the launch date came and went, I was mystified when I heard accounts of people being in awe with the impressive package, even though I hadn’t seen the actual product in question. It hadn’t been preordered at my comic shop, so I had no clue whether it’d been delayed through that particular outlet. I didn’t want to post the pages until I saw the book in person. 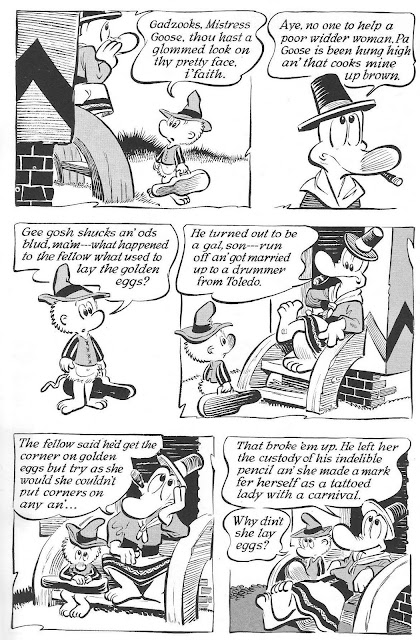 It took going to several bookstores until I found it buried somewhere in the humour section of a large bookstore. It was extremely tricky finding it, because the comic selections were all over the map. There was one corner that sold Manga, several shelves further away selling Graphic novels, children’s Manga on the other side of the store, and French BDs smack dab in the middle. The humour section was on another floor, sandwiched between Entertainment and Poetry. If you’re trying to sell a new comic, it’s a better idea to have similar products together in one location, don’t you think? 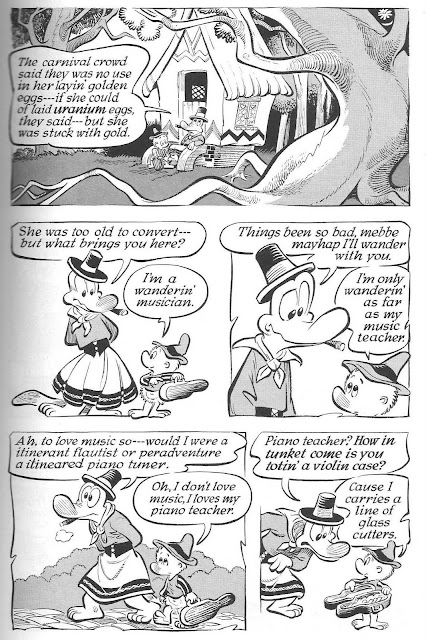 Considering the amount of dialogue and detail a typical strip contained, Pogo must’ve been the closest thing to overstimulation a child in the 50s could receive. Pogo is so chock-full of multiple characters and bizarre speech patterns that it’d take a lifetime to sort it all out. And that’s before the political caricatures entered the picture. Of course, it wasn’t without its little problems - all of the animals of Okefenokee swamp are extremely gullible and easy to fool - even the villains. There was a similar plot of Pogo being kidnapped and held hostage by two predators, and somehow bluffing his way out of their clutches - within the time span of months. 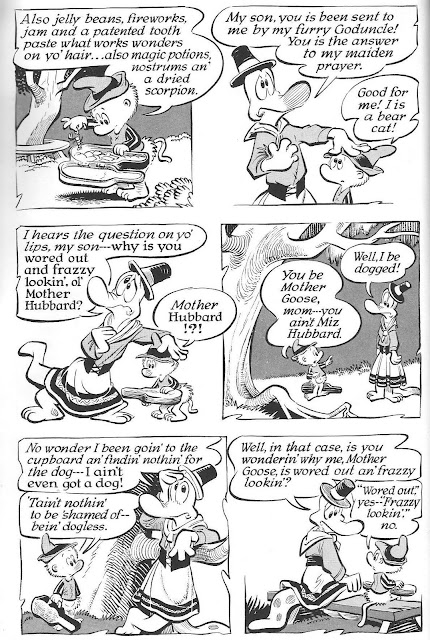 It’s probably easier to appreciate the intricate details of Pogo once you understand the basics. Pogo Possum is the vanilla main character and straight-man. Albert Alligator is the well-meaning oafish blowhard who’s always snacking on Pogo’s wares. When you’ve got the kind of rapport the two have between them, you can better understand their relationship, even if you’re annoyed at how often Albert keeps mooching off Pogo’s groceries. How does the possum get a chance to eat when everybody’s taking his food away? (I’ve just realized that this is another Calvin influence, when Hobbes declared double rations to award the mutiny) 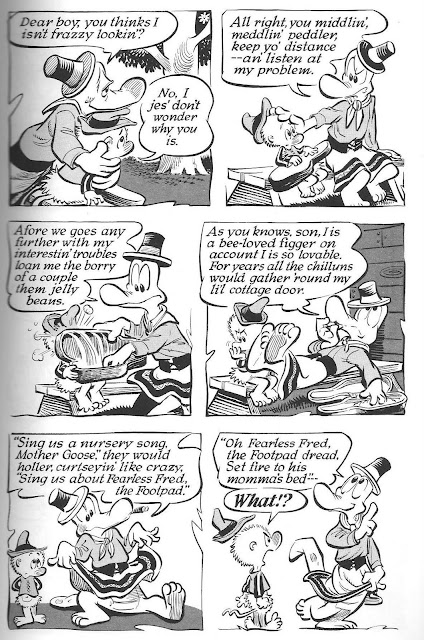 These are the kind of violent lyrics that tended to be used all the time before Nursery Rhymes and Fairy Tales were watered down in order to appeal more to children and gory-sensitive adults. A study found that some rhymes were more violent than TV shows. What child wouldn’t want to hear about the old lady in a shoe beating her kids, or babies falling from treetops?

The history behind some classic rhymes can be rather disturbing. Some other obscure examples can be found here.

Naturally, Pogo objects to this kind of thing, so he offers some alternatives. This saccharine nonsense is the kind of thing that gives children’s entertainment such a lousy reputation. They sound cute, and that’s all they’ve got going for them. 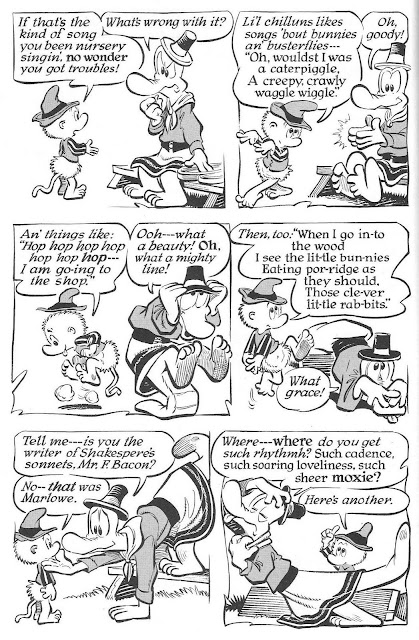 This sounds like a variation of those Meow Mix commercials. It'd probably be a big hit with cat enthusiasts. (Albert's probably accidentally swallowed one at some point) 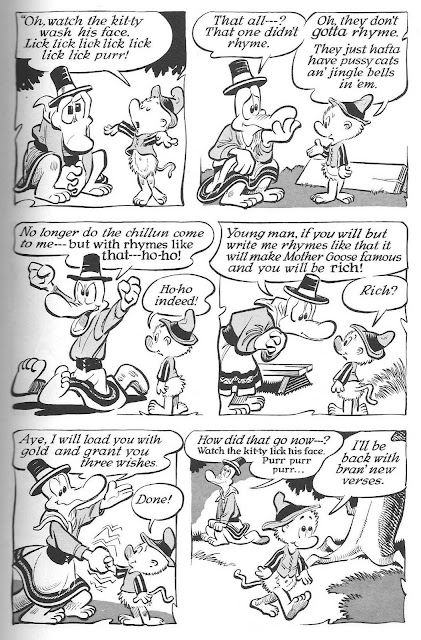 Patience. We’ll get to the Calvin & Hobbes influence soon enough. For now, enjoy these mangled poems. 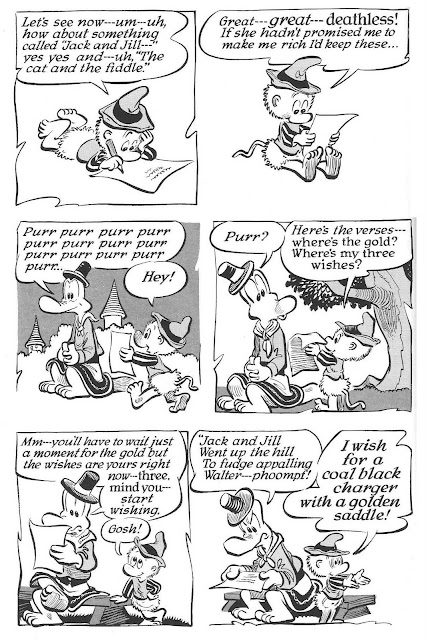 Not much to say about this one here. 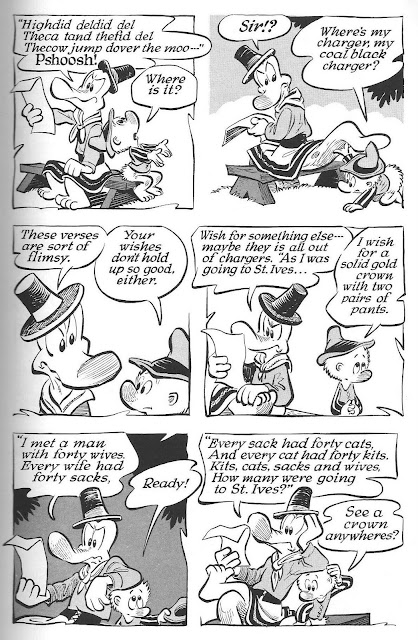 We now get to the the meat of the comic, and why people have fond memories of Pogo in the first place. For all the bumbling around with funny animals and wandering plots, it's the Funetik Aksent that most readers remember. Some still fondly recall the nonsensical lyrics to the Christmas carol, Deck us all with Boston Charlie. 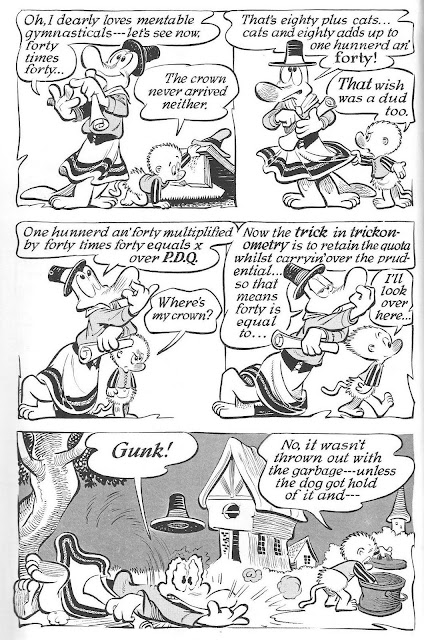 To everyone who worries about dropped potential plot points, no need to worry about the third wish here - Pogo never bothers getting a chance to make use of its uselessness. 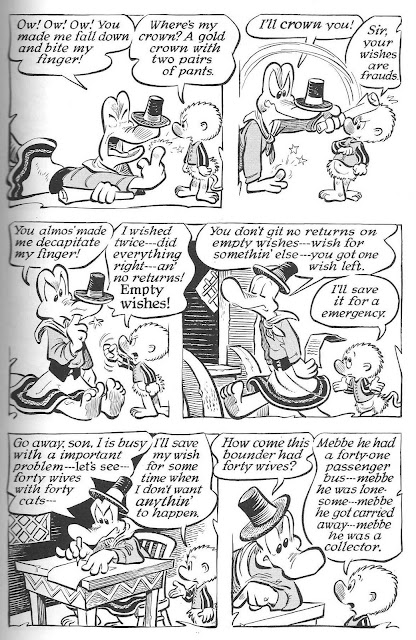 I like how the question of Bigamy doesn’t even enter the picture. These other reasons are certainly more imaginative. This is also the sort of maddening trick question that shows up all the time in Professor Layton games. 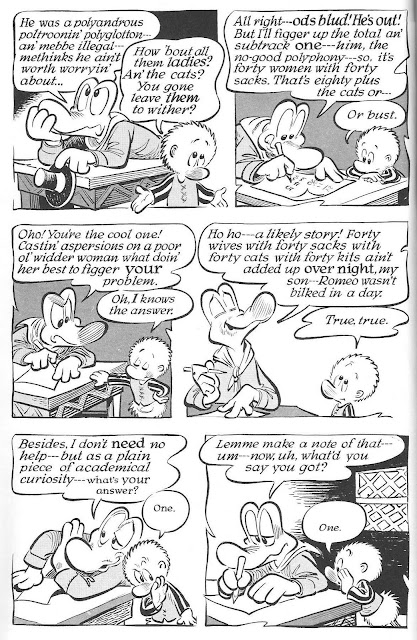 I like to think there's an extraordinarily long pause between the first and second panels here. 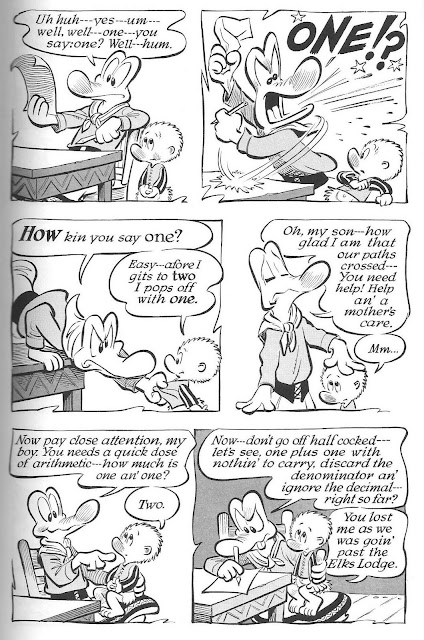 I told you we’d get to the influence sooner or later. We can clearly see where Hobbes’ mathematical ability comes from. 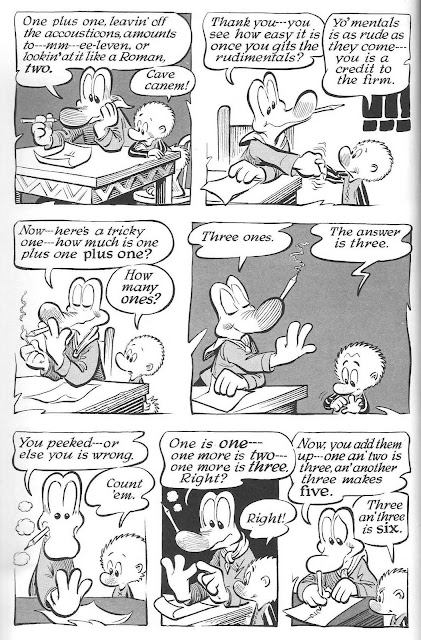 Here, we also see how Calvin's Dad invents new rationale to explain his outlandish stories. Or maybe that's an inherent trait of everybody who likes manipulating young developing minds. 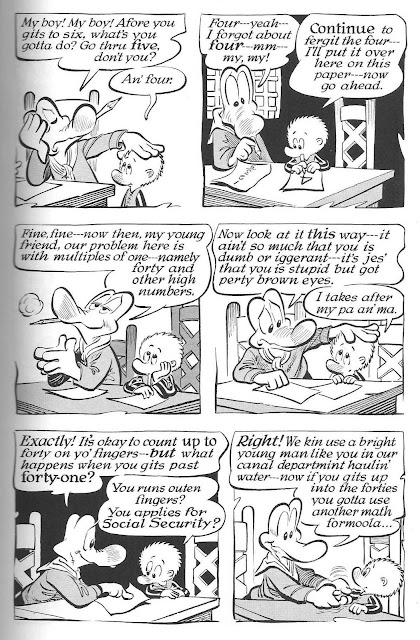 As with all things Pogo, the subject invariably veers away from the original topic, and has to be mentally wrenched back onto track. 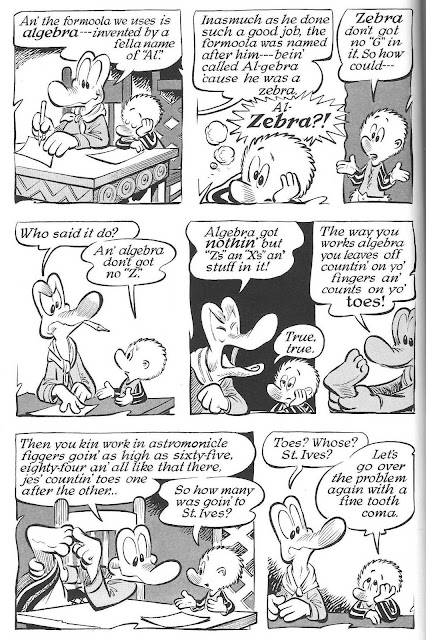 The mathematical answer to the man + 40 wives x 40 cats x 40 kits question, if you didn't know it already, or bothered to look it up, cheater. 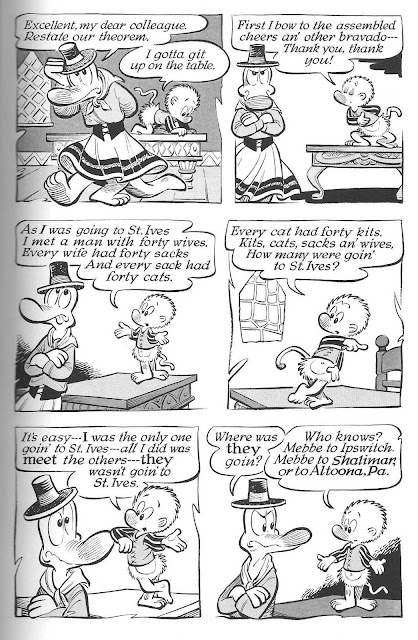 I’m not going to help you with this last one. You can easily work it out yourselves, though that’s a lot of cats there. 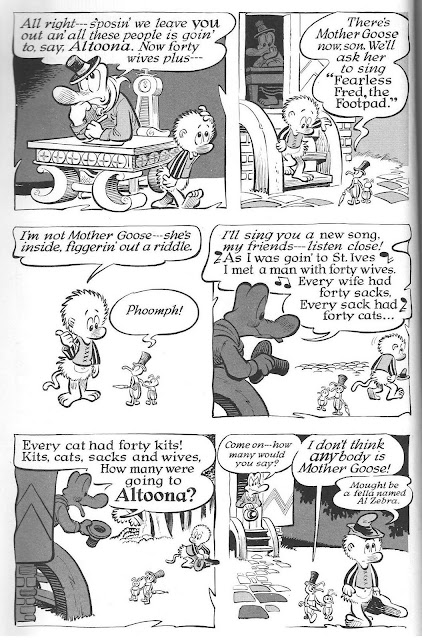 Bonus question - if it takes a mouse to feed a kitten, and two mice to feed a cat, how many mice will it take before the women start screaming their heads off?
Posted by DeBT at 1:50 PM