With the recent announcement of Fantagraphics' long awaited Pogo books, it might be cause for celebration. However, the news that it won't be released until November of this year doesn't exactly bode well for those of us who've been patiently waiting for these books since they were first announced in 2007. That's a long time to wait for well-reputated comic archivist company to gather the considered long-lost Sunday strips that were a major mainstay for Pogo's popularity.

Unlike the daily strips whose storylines would last several months without end, the Sundays were different. Walt Kelly always created Sunday strips that weren't considered part of the main narrative, and were designed to work well enough on their own. Since these wouldn't be deemed neccessary for full enjoyment of the strip, people wouldn't have considered keeping these, not knowing they'd be needed years later.

When my Grandmother made her annual trip to Florida in order to escape the curse of winter, she was thoughtful enough to save some of the Sunday comics from the newspapers there. Since newspapers have different coimics depending on the geography, I got the chance to see several strips that I otherwise would've been ignorant of. One of these was the brief Pogo revival strip done by Doyle and Sternecky. 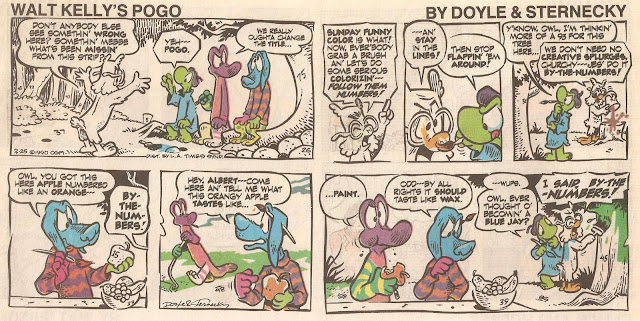 When negative reaction to these creator's comic turned foul, the writing and drawing chores was passed on to Walt Kelly's children. After failing to live up to Walt's legacy, I can't imagine how well Peter and Carolyn managed to try to carry on the torch . It's equivalent to Orson Welles' kids being expected to create a masterpiece on par with Citizen Kane. That's some high pressure to live up to.

Sadly, my Grandmother wasn't as devoted to collecting comics as I was, so I only managed to save two of the latter-day Pogos. I had to constantly remind her every time she went back to Florida in the hopes that the newspaper would pick them up again. They never did. My knowledge of this strip is extremely slim, save for what I remembered, involving a rabbit with a crown who was caricatured as George Bush. (Then again, it could be Prince Charles - Pogo was notorious for never quite spelling out what point it was trying to make)

However, I did manage to pick up some subtle clues from these slim offerings. First up, from the first strip, it seemed obvious that Albert and Beauregard got into a fight that involved some paint-slinging, hence their awkward colour scheme. Secondly, the absence of Pogo was something I dimly remembered, where Pogo was practically absent. Thirdly, Albert's reluctance to be washed with the dreaded "soap & water" helped clear up some of his aversion to being cleaned, which was only hinted at in some of the Pogo collections I picked up cheap.

If - and that's a big if - IF Fantagraphics manages to follow their promised publishing schedule as planned, I'll celebrate by scanning two major stories in Pogo's Peek-a-Book that greatly influenced Calvin & Hobbes. Seriously, the amount of influence is so strong it's like Watterson plagiarized from Kelly without anybody complaining.
Posted by DeBT at 6:37 PM