One of the saving graces of the old scansdaily site before it was taken down was that it was a bastion for alternate comics that otherwise would've never gained attention otherwise. We were treated to rare gems such as a Muppet Noir mystery written by Mark Millar, issues of 2000 AD when Judge Dredd wasn't always a jerk, noteworthy webcomics and if we were really lucky, translated pages of French comics.

Somebody even went to the trouble to put up black & white short stories with hillarious twisted endings which was an ongoing project at Marvel to collect such comics before it fell through. Anybody who remembers the titles "He Wished he was a Vampire!", "Inside is Ty!", and "The Last Look!" will have some idea of what I'm talking about.

One of the few things I saved was this satrical cereal comic. I'll say no more, save that I have no idea where it came from. 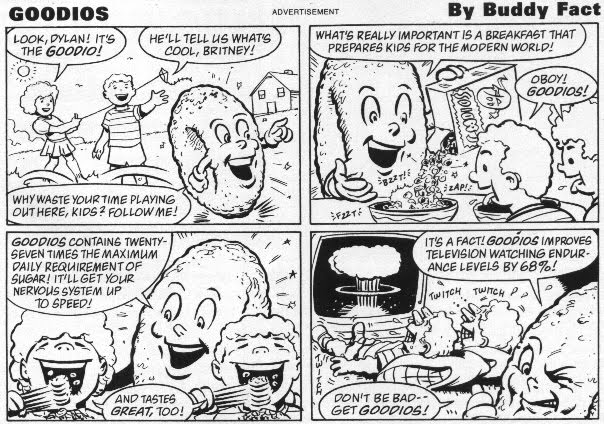 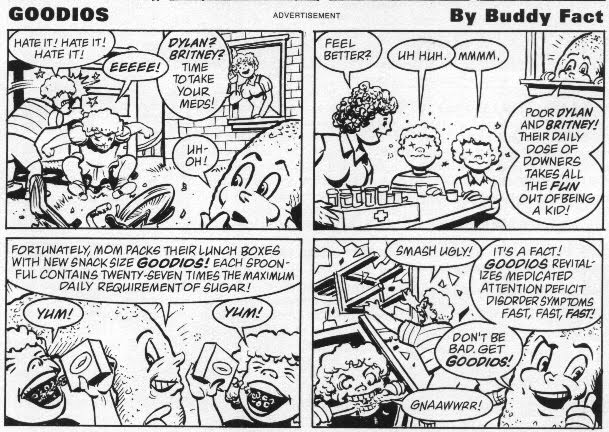 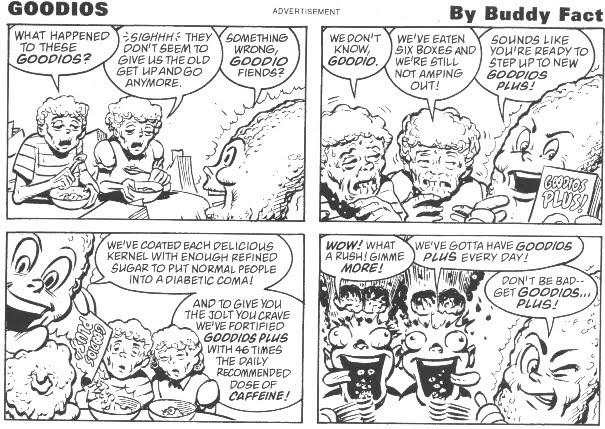 It took me awhile to figure out why the kids' shriveled mouths looked so familiar here, and then I realized it was a tribute to Will Elder of MAD fame. If Buddy Fact wasn't a nom de plume for the legendary artist, then it's an amazing likeness. Don't bother looking up the author online - I can't find him anywhere. Chances are, this post will be the only reference to his name. 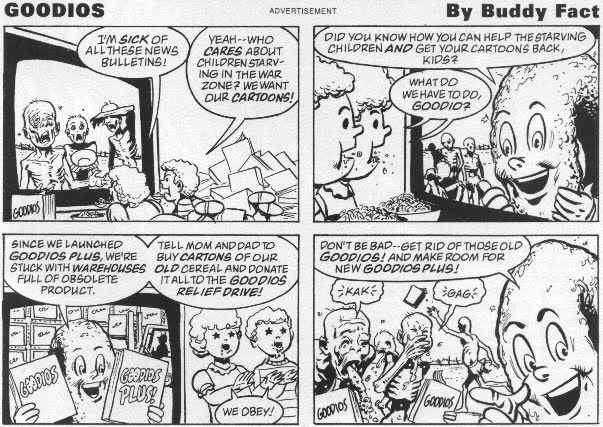 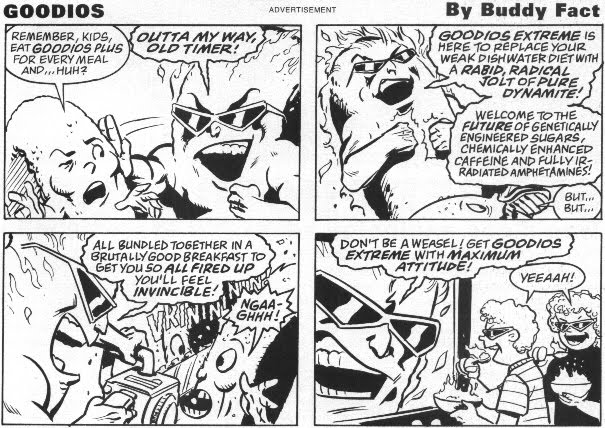 As one commentor on the old scansdaily site said, "This was just perfect." I miss the days when children's commercials had cool cereal ads that tried their damnedest to convince you to buy them. Until parents concerned about the sugar intake of children protested enough to have them taken off the air. (That's my guess for why they're no longer available even though they were a staple for years.) At least we enjoyed a good run with the Honey Bee, Captain Crunch, Lucky Charms, Cocoa Puffs, Sugar Bear, Cookie Crisp, Fruity Pebbles and Chocolate Frosted Sugar Bombs before they were taken down.

As amusing as these commercials were, none of them actually convinced me to purchase any of them. The only commercial that was catchy enough to actually make me want to beg my mother to buy was a Chef Boyardee ad for Tic Tac Toe spaghetti. However, because I lived in Canada, she couldn't purchase this despite my complaints, which diminished my desire to ask for anything else on TV. Being unable to aquire most of the advertised stuff probably produced my reluctance to be influenced by TV ads. After all, what's the point begging for something if it's not nationally available?

Some company should seriously consider doing an archival DVD collection of all the commercials they've done over the years. In addition to seeing the evolution of iconic cereal mascots, they'd also be preserving their imaginative legacy for future generations to see what all the fuss was about. Plus, they'd have the nostalgic public practically paying for their own advertising. It's win-win!

EDIT: After doing a little searching, I found a site, Videomercials where Lionel J. was already going to the trouble of going through all his recordings from the 50's to the 90's and burning them onto DVD for mass consumption. It's even more impressive when you consider that VCRs didn't even become available for customers until the 70's.
Posted by DeBT at 12:22 AM