Lately, there was an essay by former Tokyopop editor Tim Beedle making the argument that American-made Manga weren’t popular enough compared to the Japanese product. As lamentable as it sounds, fans don't graviate towards Original Manga for several reasons, not because they're Japanophiles, but because they've been burned on seeing highly advertised comics being less than stellar than they were led to believe.

I’m going to echo what I already wrote on the MangaBlog and AllAboutComics’ comments section with a few new additions.

Of all the OEL Mangas that I’ve seen, only Nightschool and Hollow Fields stand out as above-par work. Maybe its because the creators are from Russia and Australia that explain the exoticism in their work. Maybe its the similarity in tone to Harry Potter and Gunnerkrigg Court. Or maybe they just put more effort in their creation than the competition. Too many of the attempts to emulate Manga that I’ve seen try too hard to copy the styles and don’t lend themselves to freely experiment the layout of the page. Telophase covered this kind of thing more eloquently than I can, so I'll let the links speak for themselves. 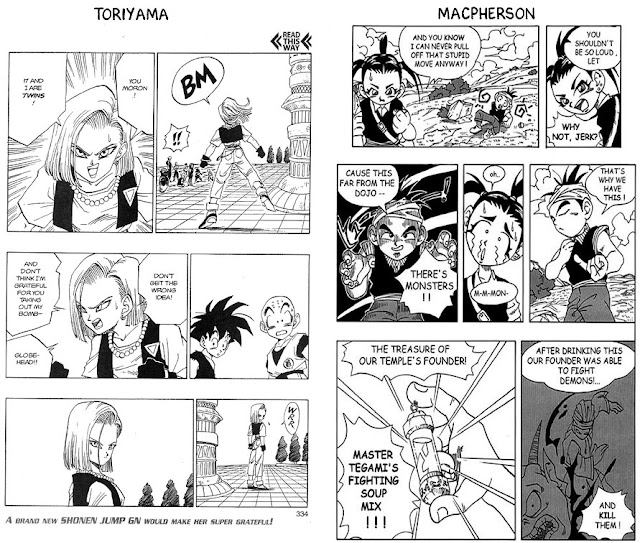 To the untrained eye, some pages can feel almost indistinguishable from authentic Manga pages, but others who’ve grown used to the flow of characters and camera angles in a cinematic sense, the rhythm between panels feels “off” somehow. I recall a particularly good analogy that fits. If you want good Mexican food, do you go to a Mexican restaurant, or get a meal produced by an actual Mexican? The difference lies in how immersed in the culture someone was when growing up. Oftentimes, a lot of the concepts used by OEL creators seem to be ripped-off versions of already existing Mangas. If given the choice between a cheesy replica or the authentic version, which one do you think the customer would want to choose? Hopefully, the more today’s children are exposed to a wide variety of various comics around the world, the more interesting their influences in storytelling will be.

So far, the most successful of the American Manga companies has been Seven Seas Entertainment (better known as GoManga, and the publisher of the aforementioned Hollow Fields). Of course, “successful” is a relative term, since I haven’t noticed any of their titles listed on an Amazon bestseller list. They produce Manga that’s designed to read from right to left, which feels more like a quirk than anything. Their homepage even has multiple pages of previews of their available Mangas to an interested public. However, anybody interested in browsing their titles will be likely turned off by the covers, since the character designs seem “off” somehow. I haven’t had much of a chance to read much of their titles, so my opinion may be biased, even if it’s common.

One good way to tell if someone is taking the right influences from Manga is how cinematic the comic looks. Usually when people talk in Manga, there’s a cutaway view to an outside landscape, a view of the back of someone’s head, or a close-up of someone’s face. This isn’t an ironclad rule, but it shows how they make the act of conversation interesting. You’ll notice that when people are walking, there are oftentimes shots of their shoes to give a feeling of motion. 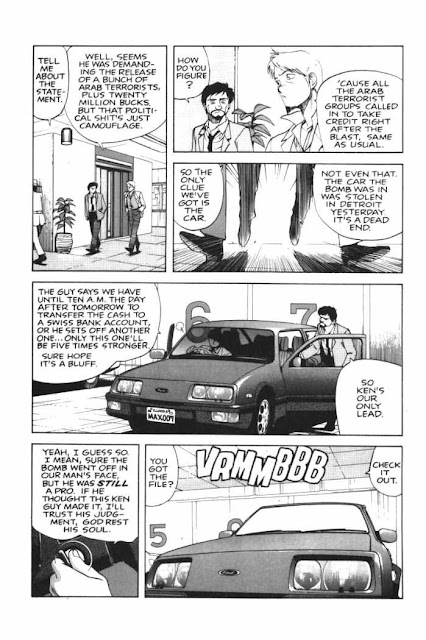 While American comic companies may feel reluctant to adopt the Manga style, that didn’t stop European and French Comic companies from jumping on the bandwagon. Many of their early attempts were embarrassingly amateurish, but they were able to learn from their mistakes and eventually evolve their style in a manner that embraced both types of storytelling without having to sacrifice one over the other. One example I can think of that’s been translated over here is the Elsewhere Chronicles.

Rather than try to compete with Manga on its own grounds, we should be taking what works in combination with ours to create a new entity worthy of reading. The goal shouldn’t be to produce Pseudo-Manga, but Quasi-Manga that’ll work on its own terms. If you’re going to try to beat the competition on their home ground, you’re going to lose unless you’re immensely talented.

Trying to intentionally create the next DragonBall / Naruto is a losing proposition. As much fun as it is to see long drawn-out fights, if they’re not supported by strong characters or addictive storytelling, such “homages” are can grow tiresome. Especially if you start intentionally stealing from the source of inspiration you’re paying tribute to. Those Mangas already have a devoted fan following, and would only take a brief look at the imitation to see just how badly they were emulated. What we should be focusing on are stories that we don’t even know that we want.

Part of the reason for the success of Scott Pilgrim might have been that each one of its volumes concluded with the defeat of one of Ramona’s Evil Ex-boyfriends. It set a comforting rhythm that while the fights with her Ex’s was inevitable, Brian O Malley could fill the rest of the volumes with whatever free-association crap he could think up and make it work. The absurd video-game references probably didn’t hurt either, nor did Scott’s unexplained fighting powers when he showed no inclination of possessing any such skills before. (Of course, nobody tried to attack him when he was slacking around)

Another factor is that when the Japanese Mangas are being created, they’re usually in the form of one-shot pilot episodes to see if their concept is interesting enough for readers. They usually start out doing short stories that eventually graduate towards longer-story terms. These little exercises not only help the creators from honing their storytelling, but also lets them experiment with narratives that might or might not work. A lot of some popular stories was usually the result of a happy accident that wouldn’t have happened. Viewer reaction and opinion also helps, since it gives the creator some idea on what their audience like to see, and may make story changes accordingly. It’s the brave artist who doesn’t bow to public opinion and blazes their own path, even if it makes them unpopular.

There’s also the problem of how to bring attention to your works when distributors are extremely reluctant to try anything that looks interesting, but don’t want to risk supporting it, because it might not sell. To compound the problem, there’s no one distribution factor that can help spread the word of a particularly well-done work. It may take years for a webcomic to garner a cult readership and who has the time? Not to mention that spending a year on a book that may produce very little return can be physically and emotionally draining for someone hoping for higher aspirations. Europeans have it slightly easier, since they can spend a year working on their books (48-62 pages in length) and have it shown in snippets in various comic magazines. I suspect that Yoshihiro Togashi (of Hunter X Hunter fame) was influenced by this model to go on multiple hiatuses to work on his Manga and spend more time with his family.

Another fault I have with American Manga is that, while they may look like Manga, they’re written like an American comic. I have trouble getting into Ben Dunn, Fred Perry and Adam Warren’s works because their cartoony characters usually wind up talking too much. Overzealous boisterous dialogue can be funny when done right, but it often feels counterproductive when I’m reading their stories with tons of redundant words. They’re of the school of thought that any page they’ve worked hours on should be looked at with as many words as possible so their audience will appreciate just how hard they worked on the pictures. Manga in comparison has multiple pages that breeze by quickly. As Brian Michael Bendis wrote in his autobiographical comic Fortune & Glory (about pitching one of his comics to Hollywood), “notice how little dialogue there is in movies.” The fact that Fred Perry’s balloons are written in tiny font doesn’t help either. 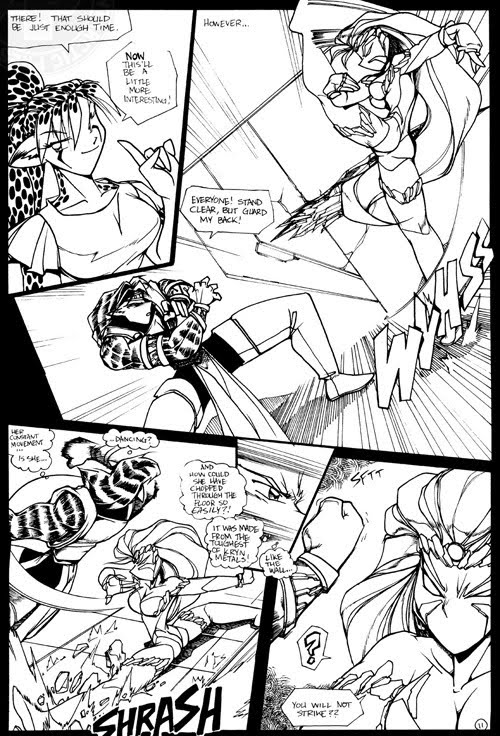 I’ll close out with a partial of Lee Barnett’s essay from the now-defunct Savant-Mag site on why children don’t read comics, postdated June 14, 2002.

I asked him why he liked reading some books and not others. To my surprise, the answers were ones that I’d not considered previously. For a start, as far as Philip was concerned, there’s a big difference between ‘reading’ a comic book, i.e. understanding what’s going on in the story, and ‘reading’ the comic book, meaning actually reading one word at a time, and linking it to the artwork. In a tribute to the artists, and their interpretation of the script (for which the writer also deserves credit), Philip didn’t have a lot of problems in understanding some comic book stories, even just by looking at the pictures. I should say that at this stage, I’m limiting these comments to the US ‘animation’ style comic books like Superman Adventures, Gotham Adventures and X-men: Evolution.
So why did he have problems actually reading the books? The answer, when it came, was simple in one respect but no less far-reaching. And it astonished me. It was something that never occurred to me, and when I asked around, with friends, and other comics fans, not one of them had considered it either. To quote Philip: “The words are too small.”
Now this confused the hell out of me when he first said it. Did he mean that the words are too simple? No, he meant exactly what he said. The words are too small. The typeface is literally too small for him to comfortably read. And though both his parents wear glasses, according to his latest eye check his sight is fine. And then, to test the hypothesis, I grabbed something I bought a while back, Jill Thompson’s The Little Endless. Yes, it’s a prose book with painted art, rather than a comic book, but Philip read it happily to me, giggling away, asking me questions throughout. When I asked him why this was so much easier to read, his response, as expected, was: “The words are bigger...”
Could it really be that simple? Could we get more children reading comic books if it was just easier to read them?
It’s something to think about.
Posted by DeBT at 10:44 AM