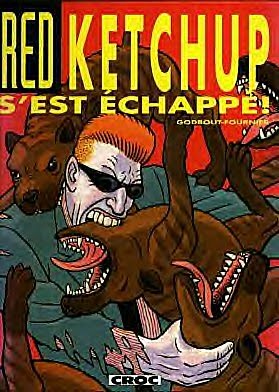 There’s been some recent tributes to Canadian cartoonists who are well-regarded, but are virtually unknown in their home country. This is hardly a secret shame, since there’s plenty of unsung cartoonists worldwide, and due to the competition, some have better PR than others. Still, its surprising when some works aren’t better known considering their imaginative quality.

I’ve just recently reintroduced myself to a French Canadian comic titled Red Ketchup. He originally ran in CROC, the Quebec equivalent of MAD Magazine, only raunchier. Red Ketchup is an albino FBI Agent who could be described as a cross between Arnold Schwarzenegger and Hunter S. Thompson. He’s very effective at interrogation, killing, and regularly takes various drugs to starve off the “shakes & headaches”, and is absolutely insane.

It’s not that he’s a rogue agent, but rather that he’s too dedicated to his country. He usually goes off on whatever madcap caper he’s on until he’s ordered to otherwise. By the time the higher authorities are informed on what he’s up to, its too late to find and recall him.

Steve “Red” Ketchup originally started out as a side character in Michel Risque in a series of Black & White comics similar to European comic designs. Given the amount of imported French comics Quebec gets, this isn’t an unusual disposition. 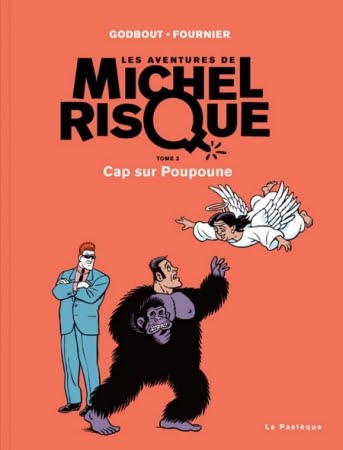 Once he grew popular enough to have his own spin-off, he got what could be described as his origin:

Born an albino, Steve Ketchup was the son of Polish immigrant, a violent alcoholic who beat his son regularly to "educate" him. He used to force Red to play chicken with oncoming trains to help him "become more of a man." and would beat Red if he dodged the train too quickly. His father suffered a massive stroke after beating Red's older sister for her hippy lifestyle. Months later, Red was asked by his sister to take their wheelchair-bound father for a walk around the neighborhood. Red took his dad for a nostalgic trip to the trainyard and left Dad's chair (complete with Dad) on the tracks (you can imagine the result).
As soon as Red was sixteen he enlisted to get away from his father, and was sent to Vietnam, where he became heavily decorated. After the war he joined first the Detroit police force, and then the F.B.I.
In the Bureau he swiftly established a reputation for being extremely violent, but terrifyingly effective. "Red" Ketchup, as he had become known, was investigating the drugs trafficker Raul Escobar, when he was exposed to a mixture of drugs including cocaine, and somehow became nearly invulnerable. Since then his boss in the F.B.I., Edgar G. Sullivan, has employed him on the most dangerous missions that the agency encounters, including (from what I can devine with my non-existent French) tracking down Elvis, taking on a cloning racket, and going to Hell.

Shortly after his appearance in Michel Risque, he was gravely wounded by a shotgun blast to the face while tussling with a drug lord. The colour comics pick up from where the Michel Risque scenes left off. 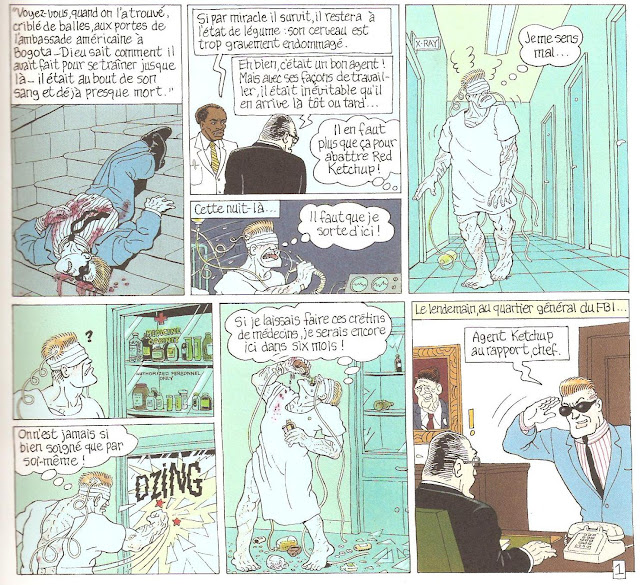 The chief is justifiably surprised, since Ketchup was in a condition that would put a lesser man in a coma for months. He tells Ketchup that despite his enthusiasm to go back to work, he doesn’t have anything for him right now, and should go on vacation. Ketchup takes this a code that he’s being ordered to go undercover. Shortly after Red Ketchup leaves, the chief wonders where the Denver file is.

Sure enough, Red Ketchup stole the file lying on the Chief’s desk. The file shows the profile of a football player who’s suspected of having drug connections, and if proved, should be approached discreetly. Upon finding a packet of cocaine in his locker, what does Red Ketchup do? 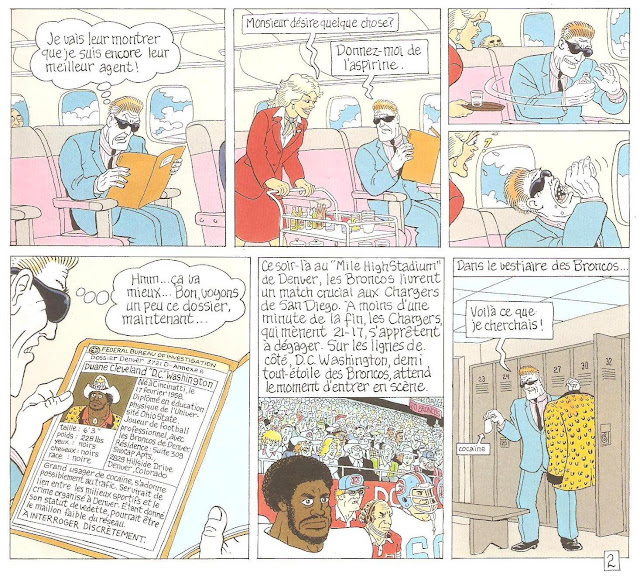 He tackles the football player from making the winning touchdown in front of millions of viewers in the audience and on TV. Red Ketchup then breaks the Football player’s arm and congragulates himself on a job well done, using the packet of drugs he found earlier. 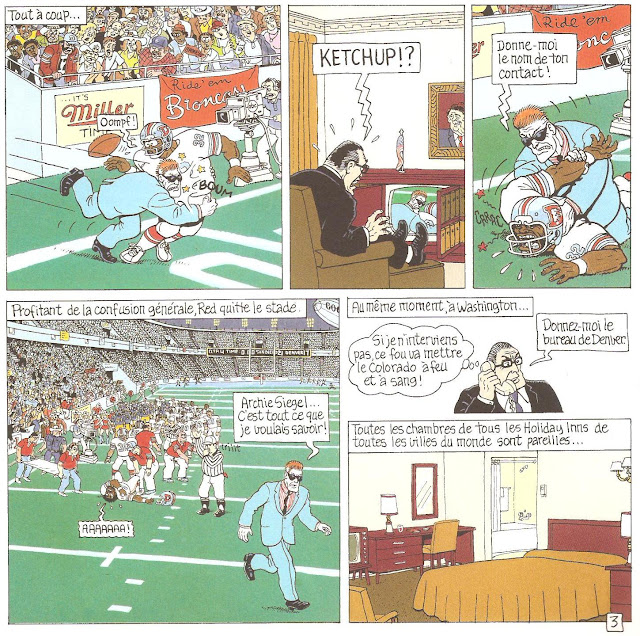 And here's his room after. You can see the parallels with H.S.T. right there. 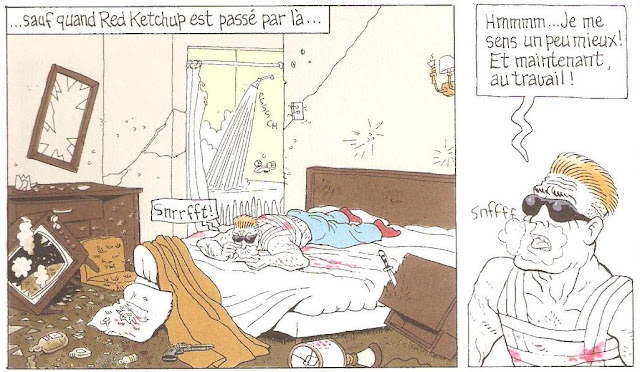 Later, using information from his last connection, he finds a plane shipping cargo to an undisclosed country. Hiding onboard, he finds the crates are packed with guns. He decides to hide inside one of them with the intent of surprising the gun-runners... 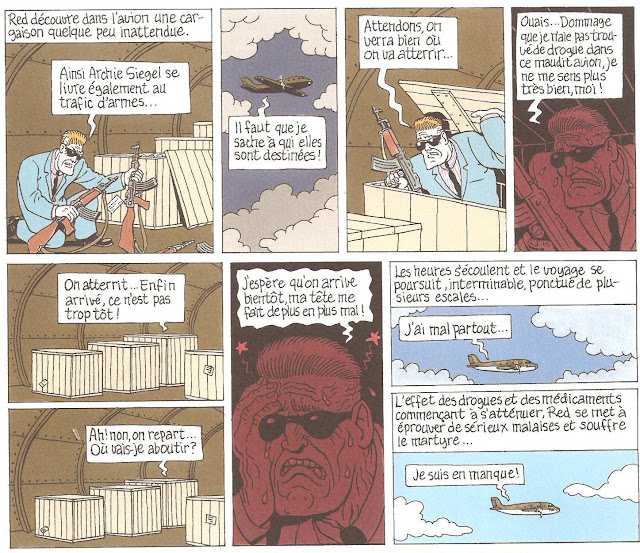 ...just not in the way he originally intended.

This brings a diplomatic note of complaint back to Washington about interfering with domestic affairs.

After Red Ketchup regains his senses, he gets a migraine that demands immediate treatment. His first instinct is to knock out the guard and go to the infirmary. Upon arrival, he shoots everyone there. In the immortal words of Fletcher Hanks, “even the nurse is destroyed”. The gunfire noise attracts the attention of soldiers surveying the camp from the sidelines, causing them to enter the fray. 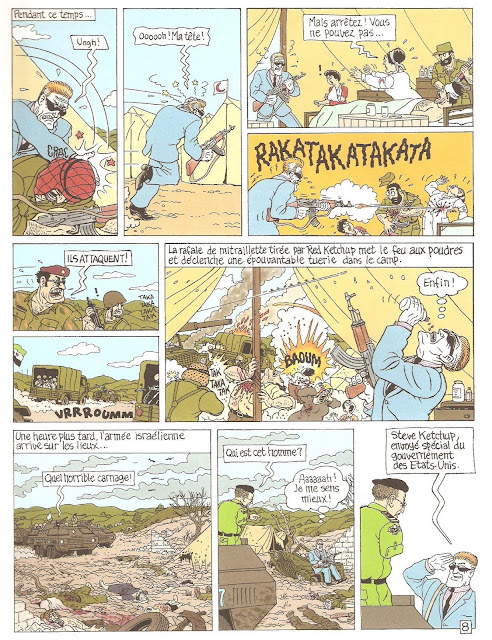 To recap, after waking up from a comatose state, he tackles a drug-using quarterback, stows away in a illegal weapons crate, sparks an international incident, and all he cares about is curing his headache. Sounds like a typical day at work to me.

After being taken in by the army, he's led to an interrogation room where a soldier had been torturing a terrorist to reveal his plans without much success. Red Ketchup offers to lend his expertise. 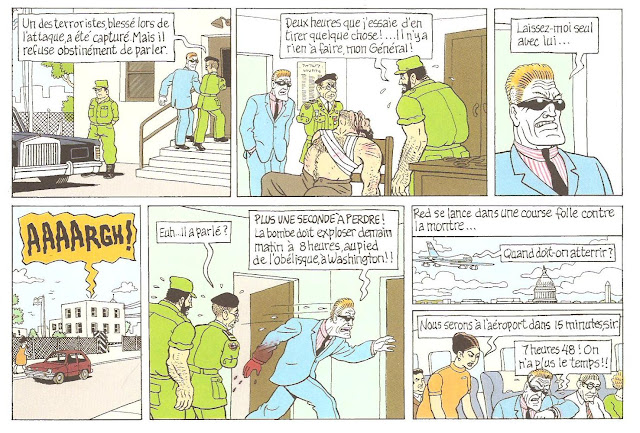 Jack Bauer’s got nothing on this guy. If Red Ketchup was the protagonist of 24, it would have to be retitled 12, considering how quickly he mows through his enemies to get to his target. In this case, a nuclear bomb in a suitcase was going to detonate at the Washington Monument at 8:00. Upon calculating that he’s not going to be able to make it to the detonation site on time, what does he do?

He hijacks the plane he’s riding and pilots it towards the terrorism spot just so he can shoot the dirty bomber at point-blank range. 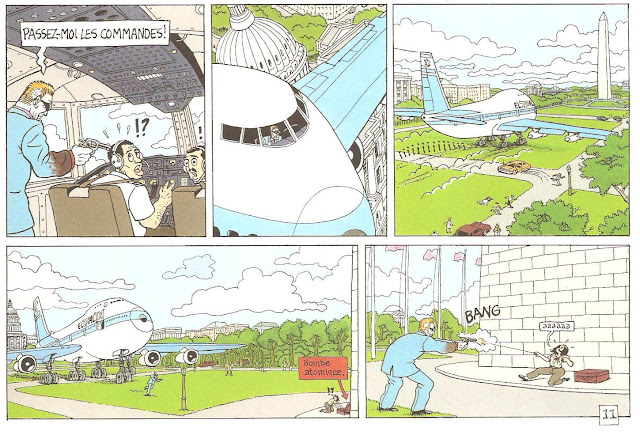 Unfortunately, he’s too late. With her dying words, the suicide bomber tells Ketchup that it’s already armed and unstoppable. Faced with the impending explosion, he throws himself on the briefcase to absorb the blast, much like a grenade... even though a nuclear explosion doesn’t work like a normal bomb. The radiation would rip through his body like paper and spread out into a radius despite his best intentions. 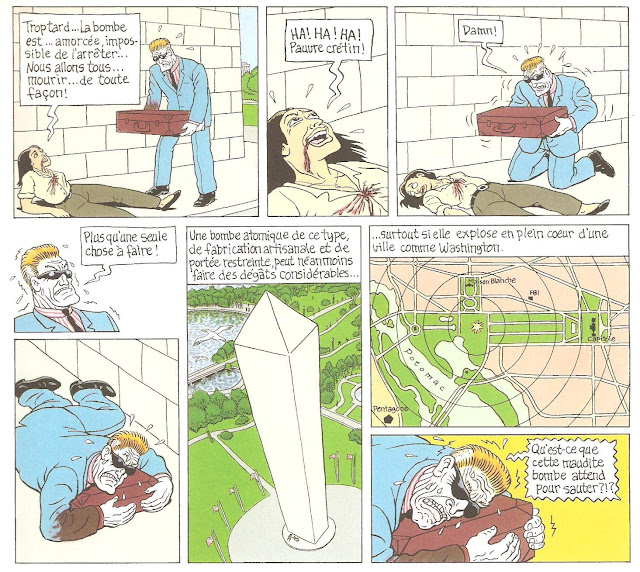 Keep in mind that all of the above took place in the span of less than twenty pages, and that’s including the origin. There’s two more stories in the book after this, but I figured I’ll save that later if anybody’s interested.

He’s what the Implacable Man would be like if he was a main character. However, because of it’s casual nudity of both male and female anatomy, it’ll probably never be translated in English. Maybe a scanlation will be available on a 4chan board, but I’m not holding my breath.
Posted by DeBT at 6:36 PM