At Robot6, there's a continuing post of various comics creators on what comics scared them as a kid, and they're going through the usual gamut of obvious horror titles.

Like this blogger, I find Horror comics to be more goofy than actually scary. I can barely read any of the E.C. titles because they've got so many useless narrative panels that only serve to give redundant details on what's happening in the story. It also doesn't help that the central storytellers, the Cryptkeeper keeps making awful puns at the beginning and end of the stories. When it comes to narrative spokesmen, I much more prefer Rod Sterling or Count D from Petshop of Horrors.

Not to mention that like most kids, what scares us is not the stuff of fantasy, but things that could happen to us. Horror movies are supposed to scare us, but they wind up being more silly than actually scary. When it comes to on-the-edge-of-your-seat action, I much more prefer suspense movies, since you're worried about what'll happen to the characters and how they'll get themselves out of the predictament they're in. Some good suspense titles I heavily recommend are:

Nick of Time, staring Johnny Depp, and whose claustrophobic timely format greatly inspired the 24 TV series.
Enemy of the State, staring Will Smith, and about a man being hounded by the Government because he's suspected of holding a national secret that he is unaware of that could threaten a Governor.
The Arrival, a Hitchcockian Sci-fi movie about global warming. You'd think that such a concept wouldn't be interesting, but there's intrigue and conspiracies underfoot. I don't normally like Hitchcock, save for Dial M for Murder & Psycho, so this is a good choice.
Dirty Pretty Things, illegal immigrants working in a hotel have to worry about not getting caught & deported back to their home country. But one worker notices that there's strange going-ons happening at the hotel he's working at. Worse yet, he can't bring his suspections to the police, lest attention be diverged on him.
Event Horizon, a horror Sci-fi movie with Lovecraftian/Hellraiser overtones. It's a very overlooked and underappreciated movie about a lost experimental spaceship that mysteriously returned after vanishing. If you can manage to watch the first minute without being scared, you should be able to handle the rest of the movie.

Most people regard the 6th Sandman issue as one of the most disturbing comics they've ever read. When I read the Sandman 24 Hours comic, I wasn't that impressed with the scenario or outcome. It was basically one man randomly forcing the people at a dinner into various situations without any sense of increading tension. My general reaction at the 22 hour mark was, "What? They're dead already??" If Dr. Destiny had given their minds back after the Asian had gouged her eyes out, it would've been more effective.

I was much more disturbed by the first Sandman comic I read, Calliope, where a muse was used solely as a means for inspiring a writer's work. When reading most of the Sandman stories, I had a tendency to have a very dry mouth, since it wasn't the kind of material I was used to reading. It wasn't "BOO!" scary, more the kind of creepyness that sneaks up on you and you know is on your person, but you don't dare brush it away since the alternative is worse.

I posted about one of the most disturbing comics I ever read that I'll reproduce here:

I didn’t get much of a chance to read many horror comics as a kid, since they weren’t my cup of tea. But there was one French comic in an anthology that still horrifies me to this day.
I can’t remember the story, where it appeared in, or how it started, but I know it involved a rich spoiled bratty little girl. She was always carrying a doll and looked a lot like Alice from the Wonderland series, To further clarify, the art style was done in a slightly realistic style, reminiscent of British Girl’s stories.
My earliest recollection of the beginning of the story was a full page spread of the girl crying because a horse was eating her hand.
If that wasn’t enough, her guardian slapped her for making so much noise, which only further prompted her into two panels of tantrums. Eventually, she was kidnapped and held for ransom. When her guardian got the note, she jumped for joy. Since the kidnappers didn’t get any money from their attempts, the little girl died.
But it didn’t end there. She got into heaven, but was deemed so annoying that Saint Peter kicked her down to hell, where she continued to happily play with her doll while countless devils casually walked around her.
What made this even more disturbing was that this anthology also had a comic of Super Goof who was tricked into finding a nonexistent meteor, and because of his flying in space, was breaking several light speed records to the point where he was growing a long grey beard.
If there’s anybody who has any idea about the French comic I just described, let me know. I’ve been dying to know where it came from.
The images that scare me have never come from Horror comics, but in another genre entirely. One of the most disturbing images was the cover of the second chapter of the 2nd Maus book. I was going along at a normal pace, enjoying the very-well done funny animal book, when this image popped up. 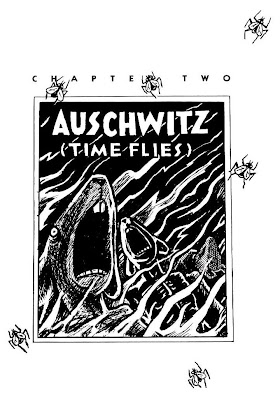 It took me a whole day to get back to reading, and put me off my supper. It greatly upset me, which was kind of the point. I glossed over the scene where it was explained in further detail. Did I mention that I was 10 years old when I first read it? I didn't even know there was a first volume, so when I read the first volume years later, I was wondering why so much of what I was reading seemed so unfamiliar to me.

There have been only three instances where I've actually fainted, or nearly fainted. The first was when I was watching InnerSpace, and the spacecraft fired a harpoon at the guy's eyeball from inside. At that moment, I felt an empathetic jolt of pain inside my eye and thought for sure that something hit my eye. When I came to, I was wondering why I was lying on the floor, then groggily remembered, and had to be carried away to the nurse's office. I daren't watch the rest of the movie after that, especially since the little glimpses I caught were the pilot pulling back on his controls, and we saw the cord being taut, giving the mental image of an eyeball being sucked in from the inside. It didn't help that there were tons of bubbles, giving the sensation of leaking fluid escaping the man's body. It wasn't until years later that I was able to gather up the courage to watch the movie and find out what happened. When they eyeball scene came up again, I still winced in pain. 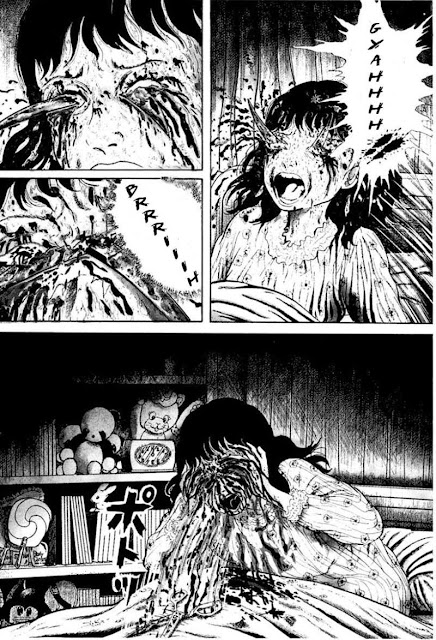 I've noticed that a lot of my most horrific images have been injury towards eyeballs. I recall one of the scariest images I ever saw in a video store where there was a woman lying on her back, lying face up, clutching her face, and we saw the tendrils of an eyeball extending from her face to the foreground. The back of the box was even worse - there were men who had bloody black holes for eyes with shocked expressions. I've tried to find the cover of this movie in vain - there's plenty of titles I saw that I'd like to remember from the VHS age.

The above image is from Kazuo Umezu's Left Hand of God, Right Hand of the Devil, and that's just in the first five pages. (Don't worry, it's just a dream, but she winds up puking even weirder stuff later on) This is the kind of thing that could serve as an alternative to the Comics' Code "Injury to Eyeball" motif - just stab them from the inside. Campfire ghost stories must've been very interesting for Kazuo Umezu as a child.

The second thing that made me faint was the 1st issue of Mixxzine, which had Sailor Moon, Magic Knight Rayearth, and two other adult titles I wasn't familiar with. I practically snoze my way through Ice Blade, but reading Parasyte for the first time was extremely nerve-wracking. For starters, there was no cover title giving any hint of what would've happened. Secondly, there was no break between the first and second chapters, showing it as one long seamless entry. When "Lefty" first appeared and explained his existence, I felt so woozy I had to lie down.

The third thing that almost made me faint wasn't from a comic, but an autobiographical novel. It was Ayaan Hirsi Ali's Infidel where she described in graphic detail the first-hand experience of her genital mutilation. It was so harrowing that even sitting down, I felt lightheaded. It didn't help that I was on the subway when reading that particular section. The general difference between male & female circumcision is like night & day. Male circumcision is designed to increase pleasure, but female circumcision is basic butchery to preserve her virginity and reduce her pleasure. It's all for the male's benefits.

Getting back to the campfire stories, I imagine it went something like this:

Camp boy: "...and then the hand leaped out and strangled him!"
(peals of horror, turning to laughter)
Camp Counselor: "Well, that was very good. Is there anybody else who has a story they'd like to tell? How about you Kazuo Umezu?"
(groans of dissent around the campfire) "Oh no! Not him! I still haven't recovered from the last story he told!"
Camp Counselor: "Alright then. Let's pass the torch to Junji Ito."
(more noise of complaints) "Even worse! You're killing us! I want to sleep!"
Camp Counselor: "You're not going to go very far if we keep excluding certain people from the group. I'm passing the baton over to Shintaro Kago."
(screams of outright horror fading with running footsteps)
Camp Counselor: "That was very impolite of them. I'd be perfectly happy to hear whatever you have to say."
(Three short stories of horror later)
Camp Counselor: ...I want my mommy.
Posted by DeBT at 12:17 PM