Ripping off Her Man

This Wednesday's Blondie seemed very similar to me, and possibly a few other humourists as well:

It's an exact retelling of a classic Herman comic, almost down to the exact wording used. Only substitute "messing around" with "fooling". Who'll tell the difference? 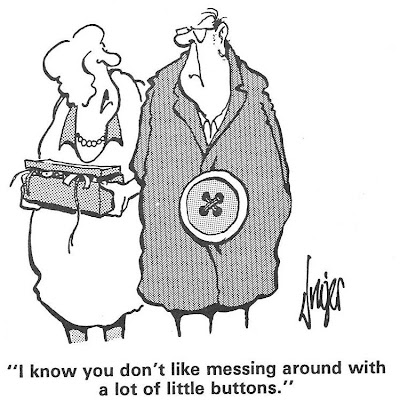 Well, I did, and sadly, we didn't get to see the visual image of Dagwood with a large button on his shirt. If it makes things easier, just mentally superimpose Bumstead's head where Herman's is. (I won't ask you to transfer Blondie's head, since that would be punishment enough)

Which was eerily reminiscent of a Sunday Herman that was never reprinted: 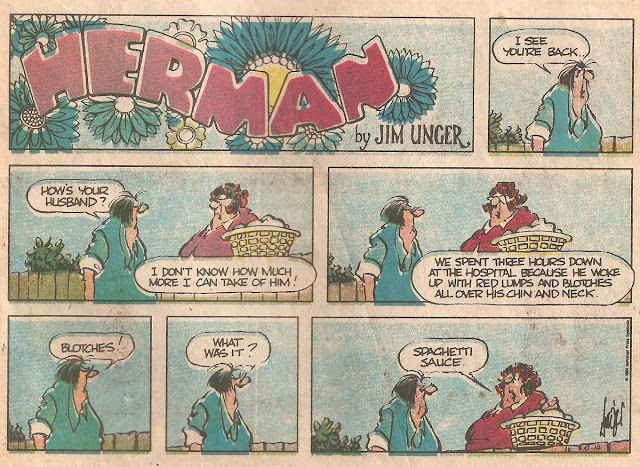 Keep in mind that this isn't the first time someone's plagiarized someone else's work for their own. History is rife with examples of artists drawing someone else's popular art style to attempt their own take so they'll be popular themselves. Comedians have outright stolen other people's schticks without batting an eye. And cartoonists do it to themselves too when they run out of ideas.

There used to be a comic magazine that would find comparisons between old and new comics, and show them side by side. I can't remember the name of that magazine, but I remember an example showing the same joke involving a Mickey Mouse prank, back when the mouse was actually mischievous and not a blank state.

Mickey finds a fancy top hat, and gets the sadistic idea of putting a brick under it. He puts it in the middle of the street where an unsuspecting passerby might feel like kicking it, much like Captain Haddock did near the end of The Seven Crystal Balls. Goofy readies himself to kick the hat, then suddenly has second thoughts. 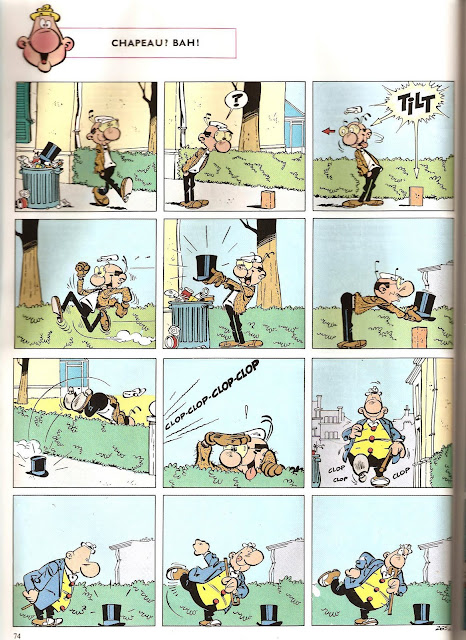 He looks at the hat again, then slides the top hat out of the brick and puts it on his head. Then he takes his dumpy hat and puts it on the brick. Then Goofy winds his leg back and gives the hat a good solid kick, and is surprised at how painful it is, much to Mickey's amusement. 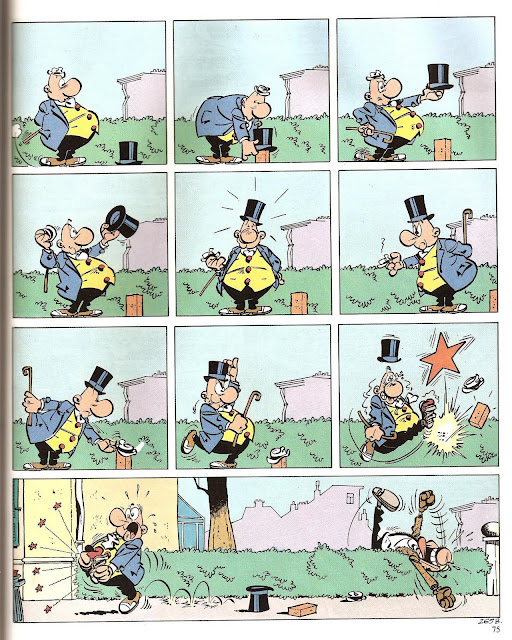 The French comic that stole this (one-page) idea was Achille Talon (a play on the name Achille's Heel), who's also better known as Walter Melon. The Achille Talon comic is much more verbose than shown here, and oftentimes veers off into irrevelant nonsensical tangents. Oftentimes, it seems like he talks more than a Claremont character. 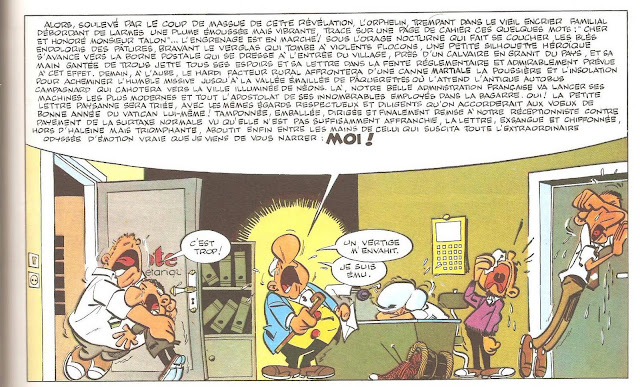 Try saying the above in one breath.

In that panel, he thought he was receiving a mail from a destitute orphan looking to him for inspiration, when in actuality it was a letter from a 53-year old man complaining about the quality of the magazine.

In truth, Achille is more of a pretentious blowhard who thinks he knows more than he actually does.
Posted by DeBT at 8:18 PM