A Little Smurf Makes All the Difference 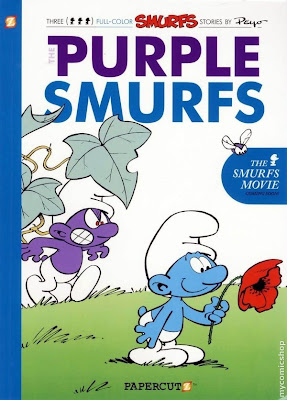 As much as I’m pleased with Papercutz releasing a long-overdue English version of the Smurfs, there’s still a few things they’ve done that I’m mildly disappointed with. 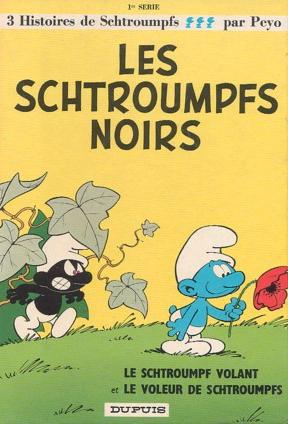 First off, they’ve scrunched up the original cover. It was simplistic enough already. Why did they need to squash up a perfectly good cover? At least they left the iconic Smurfs showing the number of stories inside. That’s something.

Next, there were two things left out in the interior. We missed out seeing numerous pale Smurfs superimposed against a blue background, including one of the infected GNAP! Smurfs. What I particularly like about this spread is that some Smurfs are acting on their own, while others are acting or reacting to the actions of other Smurfs around the board. 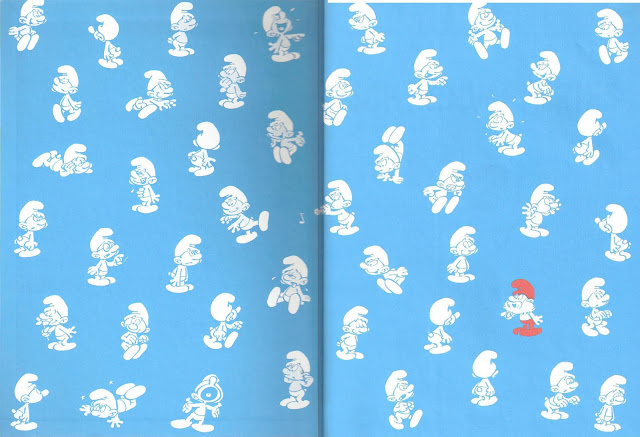 The singular image on the title page is still there, but it’s cut in half by opposite pages. Although it doesn’t add much, I always felt it was an element that helped define the stories. This is more than what’s usually done for translated BDs that combine two albums in one cover for a more attractive collection. (Especially NMB titles) One of the two title covers has to be left out. However, these Smurf books are single volumes. What’s their excuse? 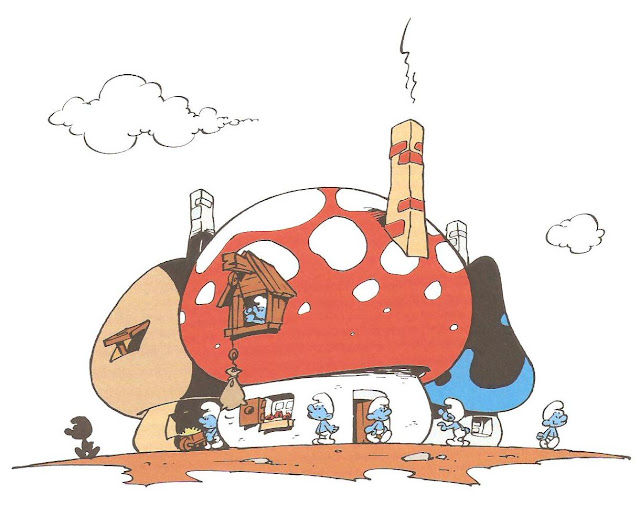 Then there’s the silly mistake of leaving out sound effects. Although some of the computerized onomatopoeia tended to stand out like a red nose in a crowd, there were a few rare cases where the absence of sounds were noticeable. One such scene was before the Bzz fly invoked what Jeffrey Brown called, “The cutest sneeze in the world”. 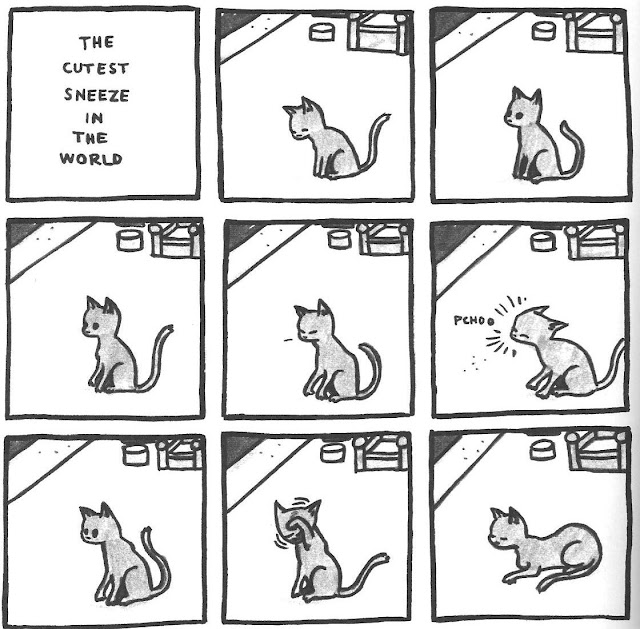 Also, in the 2nd book, The Magic Flute where Matthew knocks on Peewit’s door. All we see are some lines, but we know that there must be some sound involved. 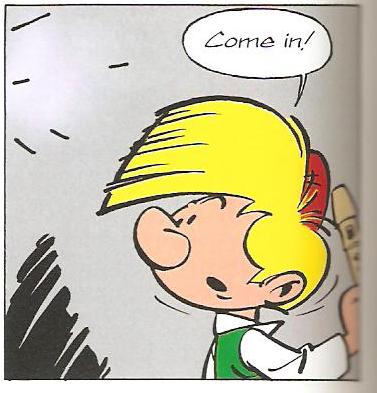 I also question their need to redo certain noises that were already perfectly acceptable in their foreign form. 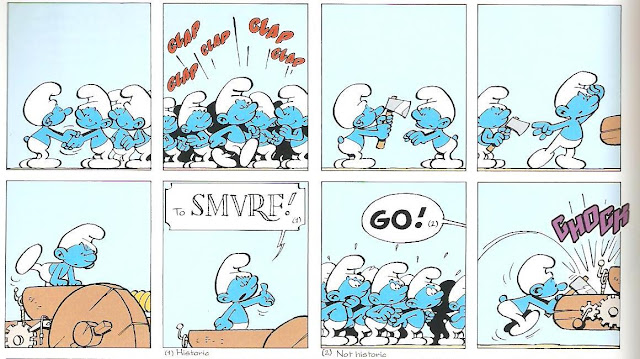 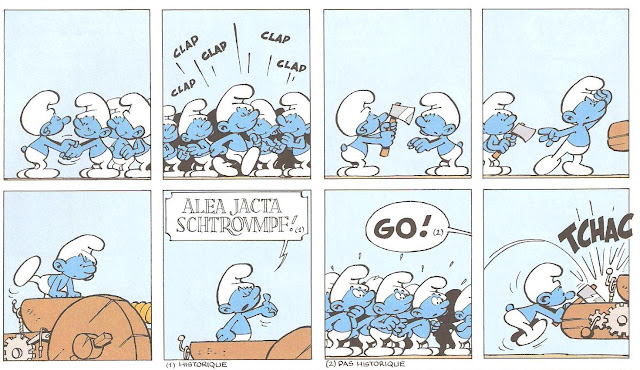 Likewise, I remember reading another translation of these scenes at a second hand bookstore, which in my mind, were bowdlerized better. 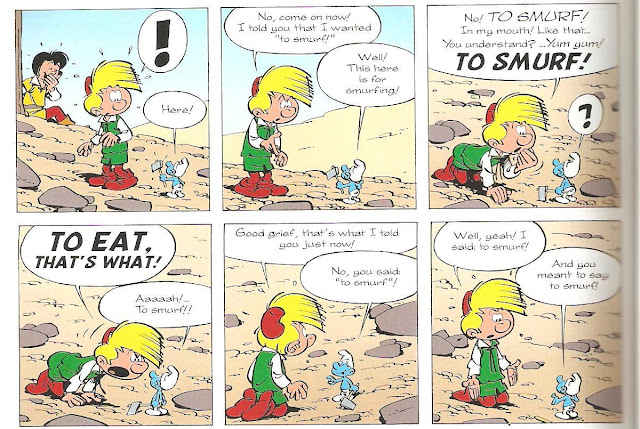 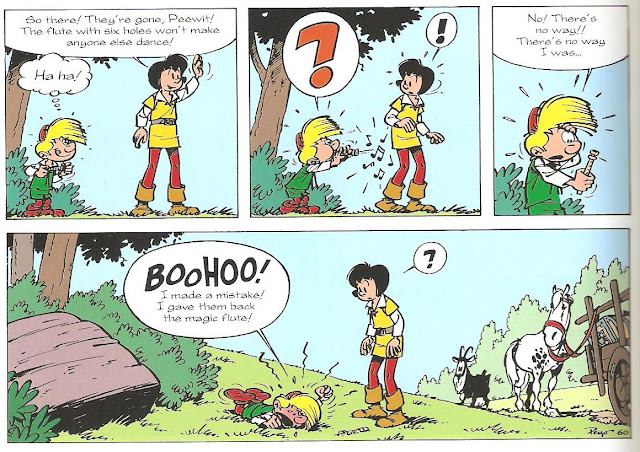 The final panels here had the following lines which I can still remember:

Looking back, I’m now sorry I didn’t buy these earlier translations when I got the chance. There was even a translation of the first volume of Thorgal, which Cinebook skipped over, since it was a weak volume. Maybe they’ll go back to it as a sort of Zero issue, with volume 2 added to it.

Lastly, they went a little overzealous with the recolouring of the Black Smurfs. Near the end, there was one Black Smurf who was clever enough to colour himself blue in order to hide among the remaining uninfected Smurfs. 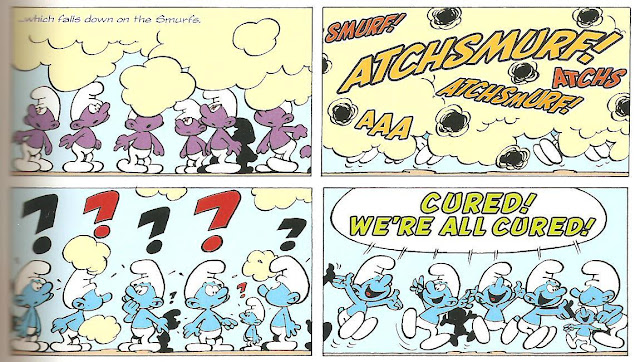 Keep in mind that when the black Smurfs sneeze, they have no memory of what just happened. So we’ve got a regular Smurf who has no idea that he’s painted blue. That should make it very interesting for him come bathtime. Or at least that's what we would be thinking if one of the Purple Smurfs were still blue. 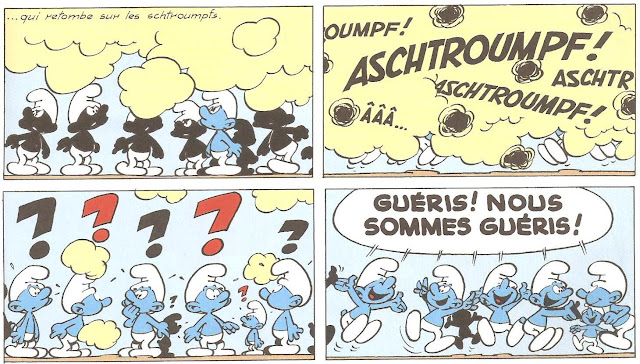