You can tell a lot about the culture of a comics' country by the most popular comic cats being merchandised there. America is well known for Garfield and Felix. Japan has dozens of cartoon cats ranging from Doraemon to What's Michael?, and that's not even counting the countless catgirls. They're also most known for Hello Kitty. In Europe, the most popular cat is an archtype almost unknown here, a fat intellectual simply known as Le Chat.
Created by Philippe Gluck in 1983, Le Chat is different in that he's a straight man without an audience. Oh sure, he has the occasional mouse to talk to, but they're more his foils than anything, and he's usually onstage alone.
Like Hello Kitty, he generally has one facial expression, but is tempered by his nonsensical observations. He's not just a sarcasic speaker or a blank state. He has something to say about the world around him.

My lack of French limits me from understanding the majority of the strips, but I've chosen a few examples from what little I could decipher, with a little help from Babelfish. Here's an example that reminds me of Scott McCloud's argument in Reinventing Comics on two different examples of black blocks, one which was comics, and one which wasn't.
Ironically enough, his one-note tone and lack of a larger storyline may be what contributes to his popularity. There was one time he disguised himself as cheese to capture some mice, and the mice broke off his body parts like pieces of brie. No matter what happens to him, he always goes back to normal. He's a lot like the comfort food of legacy Newspaper strips - a familiar face to come back to.
As you've no doubt noticed by now, Le Chat has one almost unchanging facial expression throughout the panels, usually face front, and is only seen from the back when he turns away to look in the distance. When he's turned around, it becomes clear that his large eyes are actually glasses as seen from behind.
In addition to the 3-panel strips and full-page strips, there are also single-panel jokes or drawings that are just as effective if they'd been done in 3 panels. 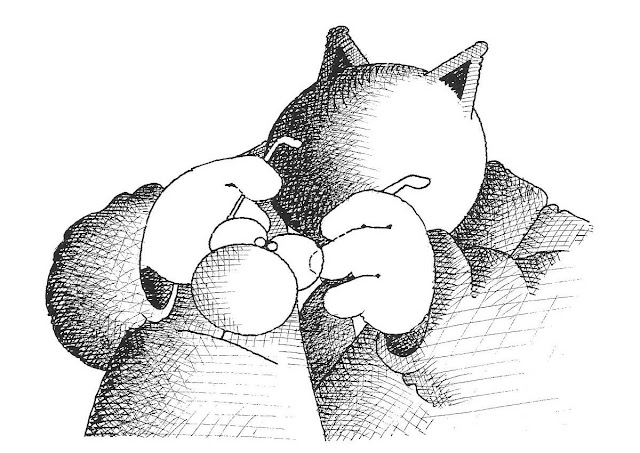 So with all these things for it, why isn't Le Chat better known over here? Part of it may have to do with some jokes that would lose something in the translation. Here for instance, in French, a candy is known as a bonbon. I'll leave it up to you to figure out the puzzle here. 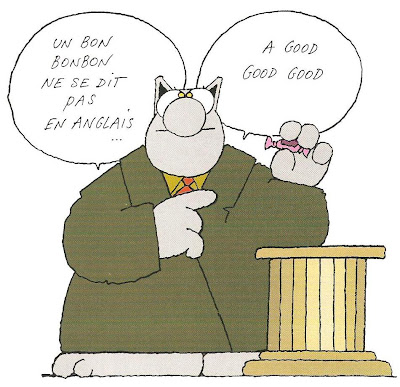 Another reason for the lack of recognition would be that some of the jokes may be considered too intellectual for the American public.
EDIT - I've just been informed that the words in the first panel are actually in Cyrillic (a Bulgarian language), and thus may actually mean something. Also, I know that he's saying "Bulgarian" humour in the last panel there, but I thought that Belgian humour sounded funnier. Like the Garfield comic and episode, there are some words that sound funnier than others.
A better reason is that some of the later strips could be considered too risique for the casual nudity of Le Chat. Unlike most cartoon animals, Le Chat is anatomically correct, and there's very few publishers who'd bother with a fat cat casually showing their uncircumsiced penis. (That'll probably answer any questions that nobody wanted to ask)
Still, there's always a chance that something no matter how unlikely will get translated for a wider audience. Some of the more adult strips could be left out without having to lose anything. Like most foreign comics, this is something of an acquired taste, and might not be for everyone. Of course, when compared to the competition, there's not much reason to listen to a fat cat in a suit.