Ever since it was announced in March (was it really that long ago?), I’d been looking forward to reading the collection of stories by legendary Moto Hagio. My only experience with her work was her A, A’ Prime and They were Eleven, and was looking forward for more. I was constantly irritated at how other bloggers seemed to be posting advance reviews of the book before I could even get my own copy. I could’ve snatched one up at the San Diego Comic-Con, if not for two things - it was well outside my time zone, and I’d already preordered my copy.

Unlike most people, I don’t like being spoiled about what I’m going to watch or read. This is why I avoid reviews until I’ve read the book or seen the movie. That way, I can enjoy the experience myself without having a reminder of a summary breathing down my neck in the back of my mind. So it was a great relief when my order finally came in, and I could find these reviews again and read them without fear of spoilers.

First up, the cons: 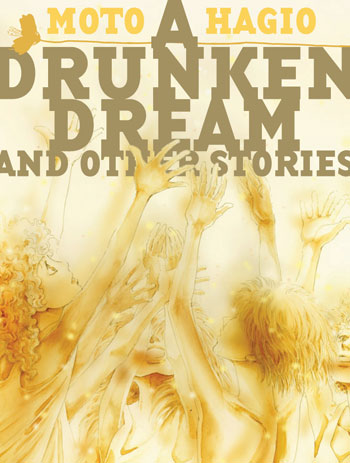 And here’s how it appeared in actuality. 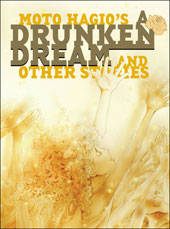 In fact, the remainder of those children continue on in the back cover, though they’re almost obscured by a drawing of the woman from The Willow Tree.

Now, for the pros:

Despite my earlier fears that they might’ve gotten the addition of the pages wrong (228 pages Vs. 249 pages), the final tally comes out at 288 pages, higher than expected.

At the time of the announcement, Christopher Butcher recommended tracking down the elusive #269 Comics Journal Moto Hagio interview. That’s now rendered moot since the same interview is included in the back of Drunken Dreams. (Read from left to right, naturally)

The level of influence of her stories is simply staggering. When you see the inherent levels that Iguana Girl is built on, you can understand how something like Petshop of Horrors could come about.

In addition to the Hanshin reprint and the Moto Hagio interview from The Comics Journal #269, there’s also a short essay about The Magnificent Forty-Niners by Matt Thorn. The latter of which describes the plot of Banana Bread Pudding, by Yumiko Oshima, which I’ll repeat verbatim here, since it’s too good to let slide in obscurity:

“...features a young girl slipping into madness because her older sister is to be married, and won’t be able to accompany her to the bathroom after 10 PM and stand outside singing “Twinkle, Twinkle, Little Star.” Without this protection, she believes, a beautiful androgynous clown will take her and run her through a meat grinder. Since her dream is to marry a closeted gay man and help him to accept his sexuality, her best friend convinces her playboy brother to play gay. As it turns out, the boy this best friend is in love with is an uncloseted gay who is in love with her brother. And, in turn, this boy is sexually abused by a middle-aged teacher who is a closeted gay man. Are you still with me? It may sound comical (and it often is), but I’ve had to swear off reading Oshima’s stories in public because I’ve never gotten through one without crying.”

As Shannon said, 70’s Shojo Manga is the Best Manga.

There have only been three Mangas that’ve succeeded at making me cry upon multiple rereadings. (The end of the Valerie diary scene from V for Vendetta is the only thing in American comics that comes close) The list includes:
1. In Please Save my Earth, when after Rin misbehaves, his guardian kisses him instead of punishing him.
2. In 20th Century Boys, when an old teacher gives his former student a well overdue gift. (Yes, I’m being deliberately vague here)
3. The aforementioned Hanshin, which features favoritism, sibling rivalry, conjoined twins and survivor’s guilt, all in a mere 16 pages. It’s no wonder Moto Hagio’s considered worthy of doing covers for Ray Bradbury.

Now I’ll have to add The Willow Tree to the list. Upon finishing Iguana Girl, I read the inside cover blurb (which unusually, takes up the entirity of both pages in large text) by Trina Robbins which mentioned that it was a tearjearker. I read the story, preparing myself, trying vainly to find any connection between the silent pages of the woman with the umbrella who was obviously a symbolic representation of the willow tree’s moods. Then the big reveal happened and I was STILL caught off guard, dammit.

It would be a real shame if Fantagraphics didn’t get any supportive business from this collection and demand for more. If they do, I heavily recommend that they release her future books in more manageable bite-sized editions, since lugging around Comic Paperbacks is easier than lifting heavy Comic Hardcovers. Anywhere between the dimensions of a regular Manga volume & the Viz Signature line would suffice. If they happen to pick up the Eroica & Swan licenses (crosses fingers), they’d succeed better if they kept their future volume size similar so all the volumes would be consistent.

I’m looking forward to reading more, and adding to the crying list!
Posted by DeBT at 2:01 PM