The Scott Pilgrim movie’s opened yesterday, and already, there are critics that’ve accused the recently concluded Scott Pilgrim series as being nothing more than Twilight for boys. This brought up the question of “Wait a second, does this mean Twilight isn’t for boys?” 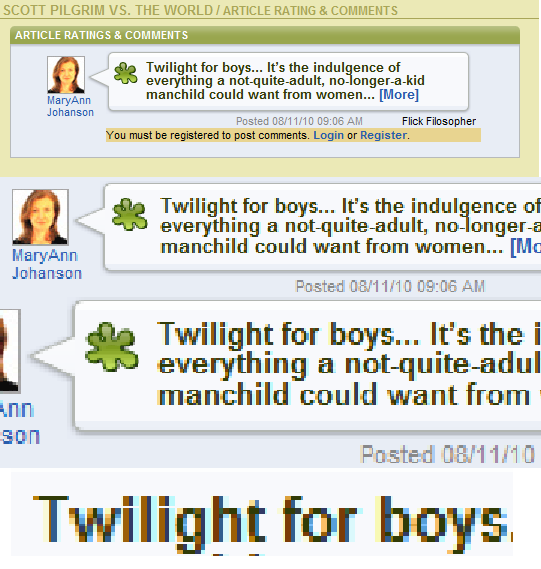 As someone who’s only had a passing interest to Twilight, and is only vaguely aware of the plot thanks to various comics condensing the storyline, I find the comparison somewhat lacking. For one thing, Scott Pilgrim may pull Kung-fu fighting techniques out of nowhere, but it’s always against a percieved threat, like an Evil ex-boyfriend trying to kill him.

For another, the romance between Scott & Ramona, although spontaneous, had time to build with sharing scenes between the two leads. Not to mention that Ramona was perfectly capable on her own. (Except when faced against something she wasn’t emotionally prepared for, which resulted in a glowing head) Even the sex is casual, though it’s mostly implied rather than avoided. (More making out though, but still...) That, and it’s funnier too.

As someone pointed out, Scott Pilgrim is more about the metaphorical pains of growing up and having to face those demons than hanging around. The fights are just a bonus.

Although I wasn’t a big fan of Scott Pilgrim (though my sister was, and lent me all the books), I could see some of the appeal in the apparent silliness of the premise. Since my sister is a far more sociable person that I can ever hope to be, she clearly identifies with the group culture where friends easily snark on each other openly with and without malice.

It didn’t hurt that there were multiple in-joke references to various Anime & Video Games. (There’s an Akira reference in the 3rd book that’ll only make sense once Kodansha re-releases the 5th Akira volume)

Myself, I’m more a fan of Hiroaki Samura’s (of Blade of the Immortal fame) Ohikkoshi, which is like a Manga version of Scott Pilgrim, only shorter & with no Evil ex-boyfriends. The closest we ever got was from the Italian Foreigner who was manipulated by his mother to exact revenge against his father for a failed noodle enterprise. The plan fell apart when he found out his father had died without warning years ago.

However, for the theme of Bad Manga Week, I’d like to propose another series that more closely follows the role of “Twilight for Boys”, the Manga, Wolf Guy. 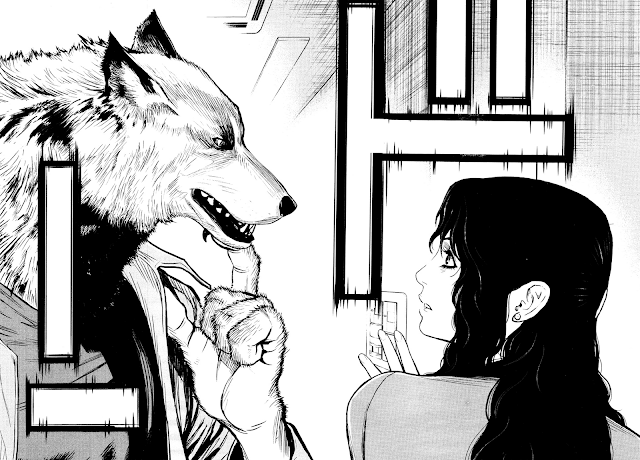 Upon reading it, my first thought was that it was just like Twilight, only with Werewolves instead of Vampires. Well, Werewolf. Singular, since as of the 3rd volume, I have yet to see more than one lycanthrope. Which is just as well, since the series is so over-the-top that another wolf domineering for territory would be pushing it. 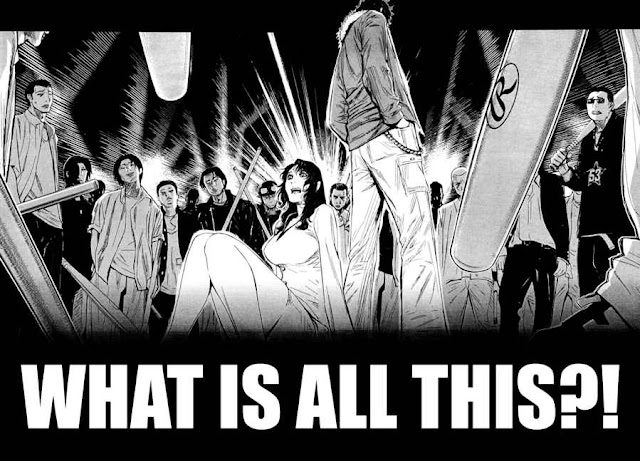 As with any action-packed first chapter, the woman is rescued by the arrival of a plucky handsome hero who’d seemed like a perfectly ordinary teenage rebel. (Though to be more precise, she just happened to wander in a one-sided gang war between the protagonist and dozens of punks) It’s not spoiling anything that against these unfair odds (the gangs should’ve brought a tank) the kid manages to beat everybody without a sweat, leaving the teacher faint. 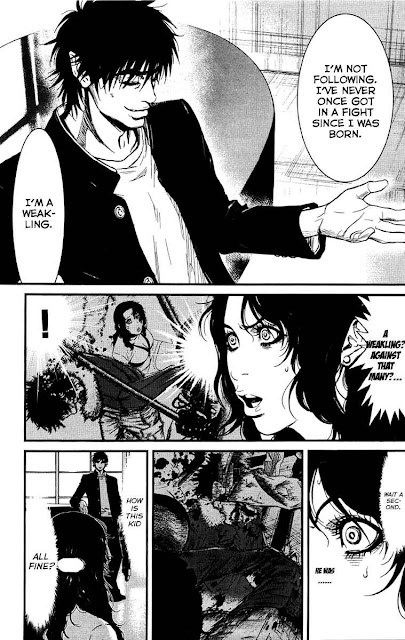 As par the course for contrived coincidences, the same teacher who witnessed the events last night has the same student transferred to her class. (Incidently, why did the Vampires in Twilight even bother going to school? Given their centuries of experience and street smarts, they could’ve gotten along just fine with home schooling) Inugami claimed that he couldn’t be the same boy, since he was so badly beaten up last night, and here he is without a single cast, stitch or bandaid. However, she isn’t fooled, since there’d be no way she could mistake such an intense boy for another. Before she can investigate any further (by having him strip from the waist up), she’s interrupted by another student who wants class to start. And that’s when the trouble begins. 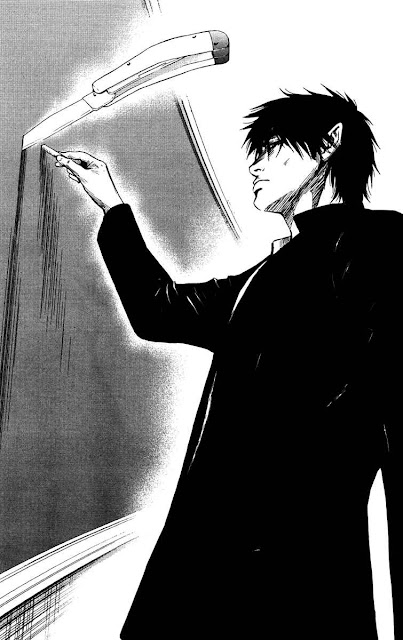 A knife is thrown at the hero (who doesn’t even flinch) to show just how intimidating the classroom politics are. On one side, we have the leader of the bullies (who isn’t even in class) who’s routinely feared because he’s the son of a Yakuza Don. On the other side, Akira is able to avoid confrontation from small-timers knifing him by dodging while remaining perfectly still.

If the definition of a Mary Sue is a perfect protagonist who’s widely appreciated with very little proof of their accomplishments, then a Marty Stu is someone who actively does these feats of accomplishments in a way to show just how he’s more badass than everyone else.

So how does he prove his superiority? By easily fighting each one of them up faster than they can blink? By threatening them of every single secret on their person by their subtle body odor alone? No, he proves how tough he is by letting them beat him up. 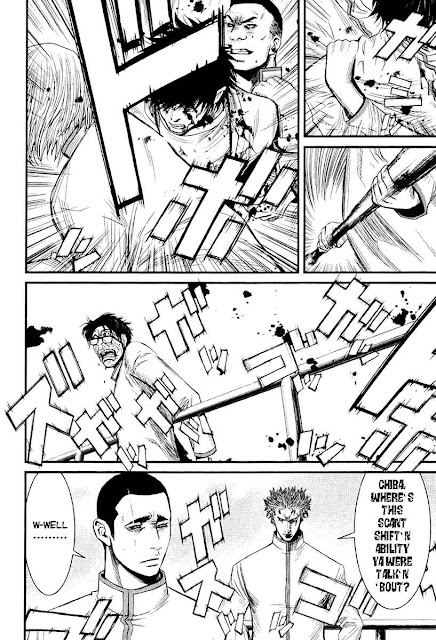 Of course, this has unintended side effects: 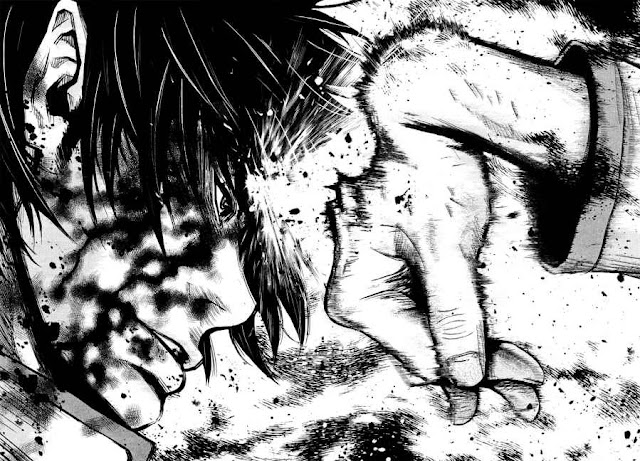 Hitting Akira with their fists results in broken bones because they didn’t throw the punch properly. This doesn’t stop them from carving up the sign for Dog on his back. His reaction to this offence? To jump off the building roof. Of course, when he shows up the next day without a single scratch, they’re more than a little mystified.

Unlike the Vampires, Akira makes no effort to hide his abilities, solely because the only ones who go after him are those who envy him. And when they inevitably injure themselves in the process, they’d either deny they failed, or no one could possibly believe them. That’s taking Refuge in Audacity to awesomely logical levels. He even goes so far as to use Wolf metaphors for himself, while simultaneously denying he’s a Werewolf. That’s some chutzpah right there. 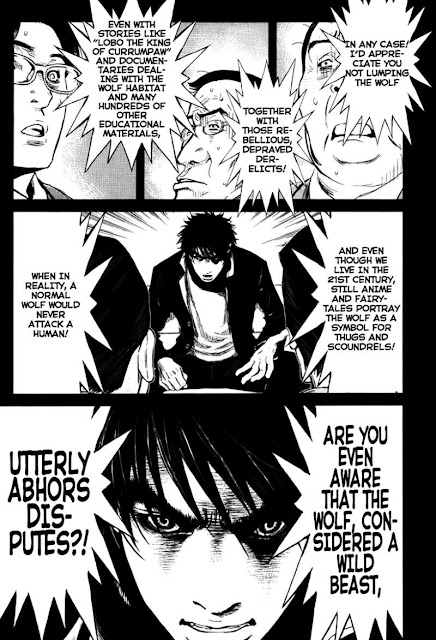 When the teacher goes to his apartment because she’s worried about him, and finds out his big secret, he tries to pass it off with a lame excuse: 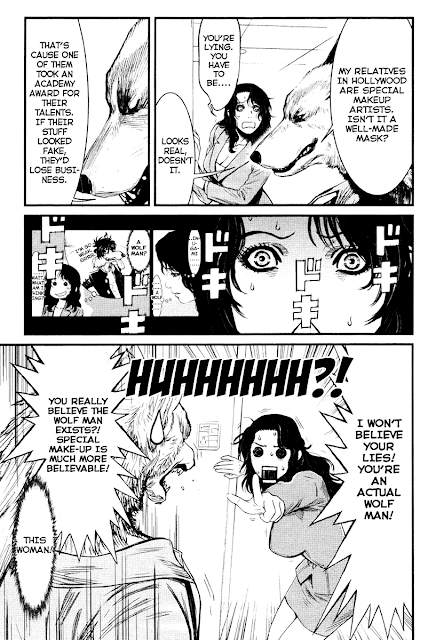 Fortunately, the teacher is smarter than she looks. Too bad those smarts don’t apply to self-defense lessons. It’s only after she leaves the apartment that she runs into the stalker/rapist who’d followed her, then later gave up after she went inside. He thanks his luck for such a chance to happen and gets with the baby-making. 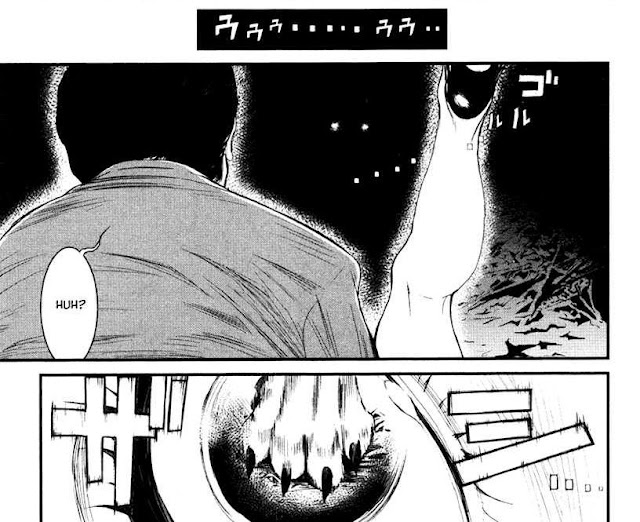 So of course, even though Akira despises himself and wants to be left alone, who should suddenly appear...? 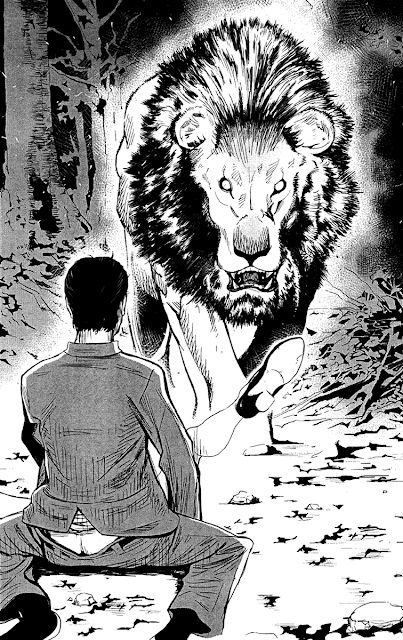 So, instead of saving the teacher from her intended rapist, Akira saves her from a deus ex machina. Nice. 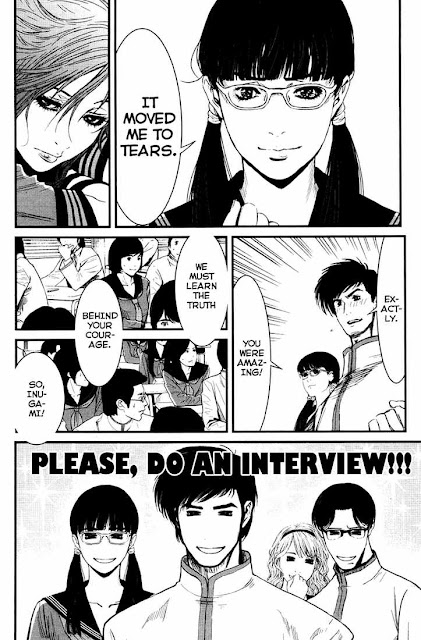 Shortly after standing up to these bullies, the other students who’d been terrorized begin to see him as a role model. They start lavishing him with praise without having to worry about the repercussions. Surrounded by the throngs of his adoring classmates, how does he treat them? 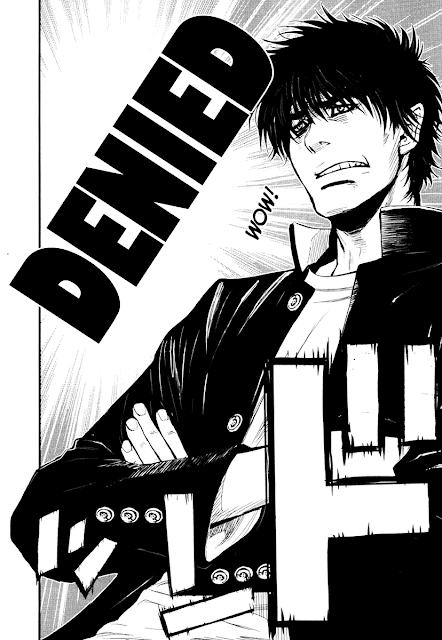 Nice guy huh? However, he does have a point: 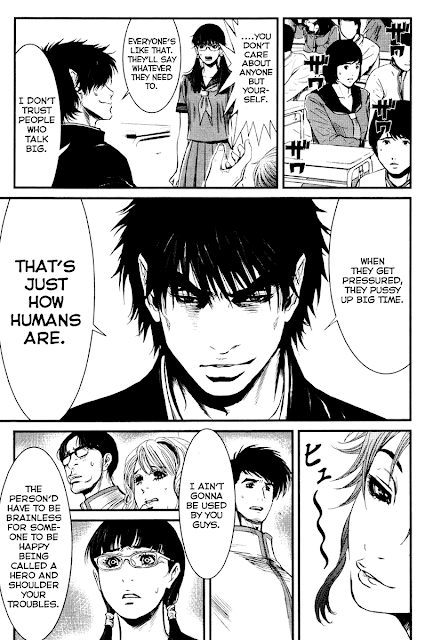 In short, this is more a Manga about bullying than romance. Anybody looking for Harlequin relationships should look for Doujinshi instead. Just as Twilight is the young girl’s fantasy of finding the perfect suitor, so too is Wolf Guy a male fantasy of being able to stand up against your bullies. This is the kind of storytelling that made The Girl with the Dragon Tattoo such a resounding success.
Posted by DeBT at 11:26 AM