I wanted to talk some more about Quino, who was talked about extensively here. Mafalda is his best-known work, but since the only versions I'd ever seen were in French (translated from the Spanish), I never had much of a chance to read them. 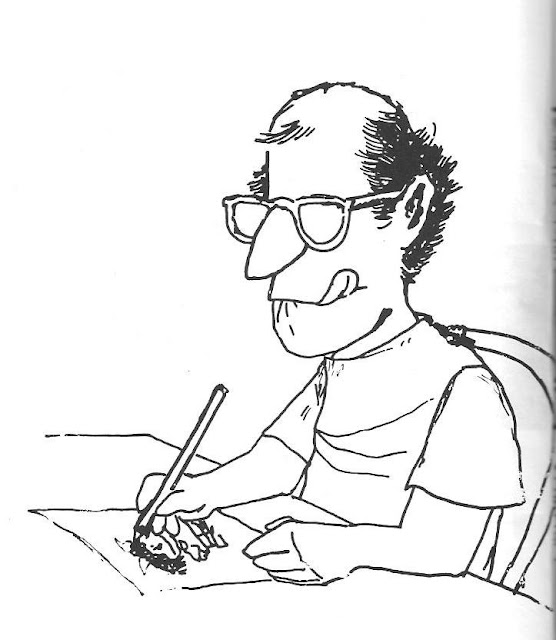 From what little I was able to discern, Mafalda seems to be a cross between Linus and Lucy. She has the psychological fear of the world mixed with the brashness and temperment of Lucy. (In terms of anxiety, Felipe is Linus squared, only with less imagination.)

Indeed, all of the children in the world of Mafalda have a high degree of anxiety. And the adults are no different. It's simultanously one of the most depressing and most honest strips out there.
Artwise, Mafalda falls somewhere between Peanuts & Calvin. But it carries more of the pathos of Peanuts, and although it has the precociousness of Calvin, it doesn’t have as much escapist imagination that comes with the bratty kid. There are some fantasies spread throughout, but they're few and far between.
That might be why Mafalda has such trouble finding an audience over here – there’s no escapism within the strip. The harsh realities of life (as portrayed through a childish lens) is there for everybody to see. And that view is a general pessimistic view of the world.

Of course, that brings up Calvin’s little speech on popular art – “Originality & Truth? Life’s hard enough without it! Only an idiot would pay for it!”

My hope is Fantagraphics will license the English version of Mafalda, since their Peanuts reprints are doing so well.
Here's a few Mafalda translations, courtesy of Mike Hunter. 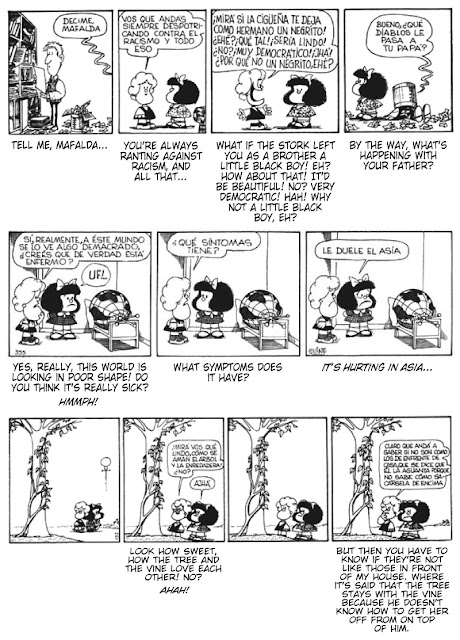 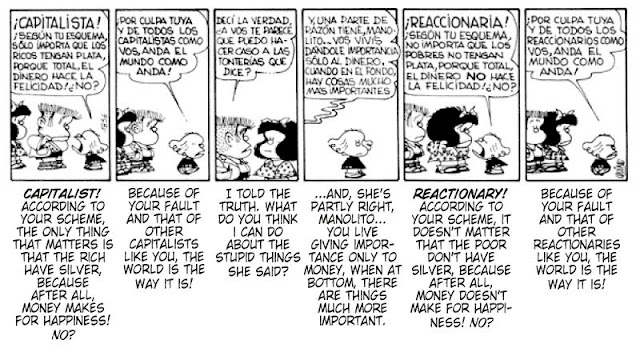 As iconic as Mafalda is, I’m more of a fan of Quino’s (mostly) silent adult strips. Those have the imagination and boundary of space that Mafalda lacks, and require great ingenuity to figure out the joke. 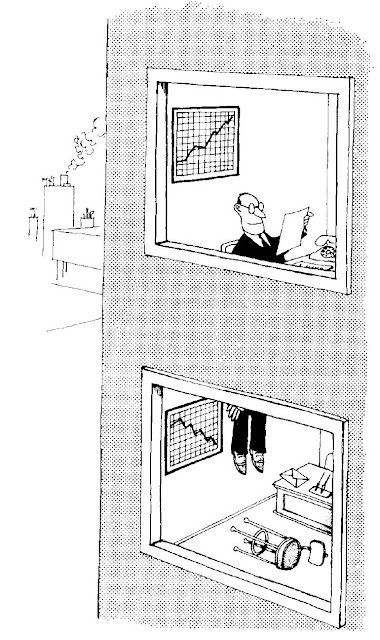 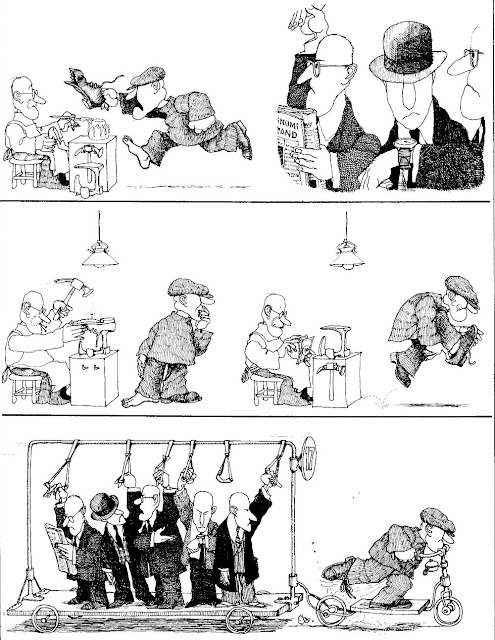 Much like the Perry Bible Fellowship, Quino's adult strips can require careful re-reading to fully understand what's going on. In addition to being remarkably insightful, they are also incredibly humourous and depressing.

Given how often Quino's country changed military government, there's no wonder that the author developed a general distrust of authority. Surprisingly enough, even though he's an atheist, there are several comics featuring Angels & Devils. 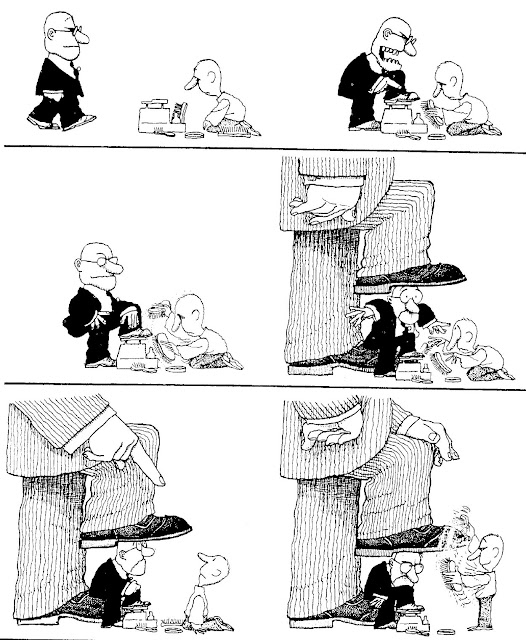 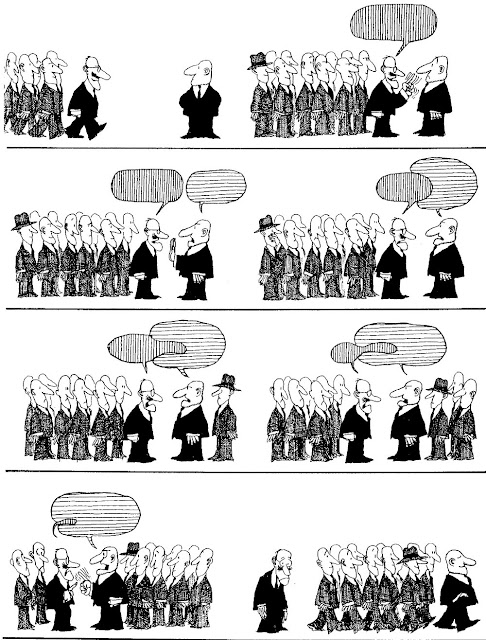 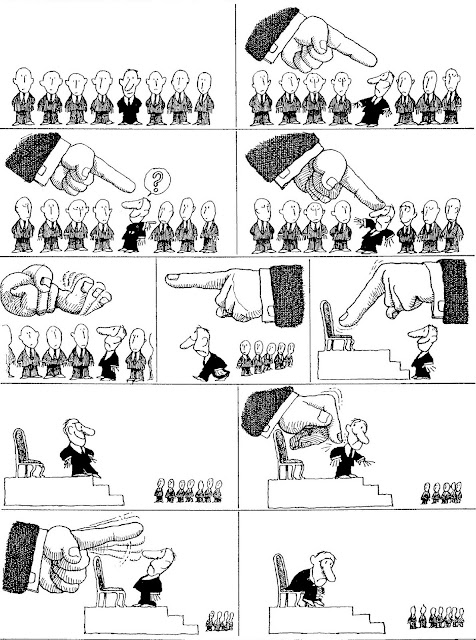 Although most of Quino's comics are silent, there are some wordier ones that're better understood with the help of a dictionary. 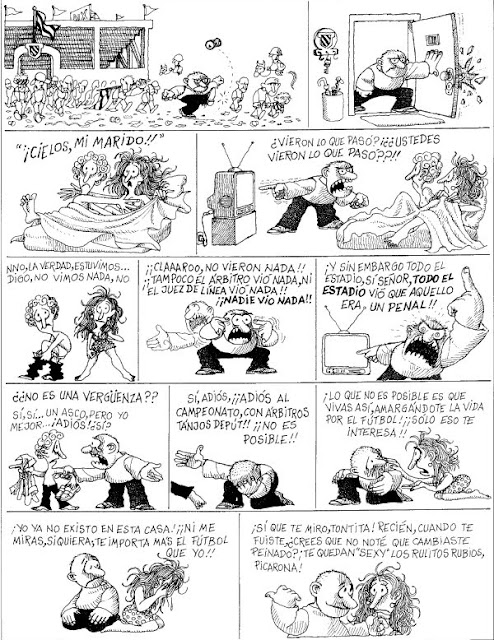 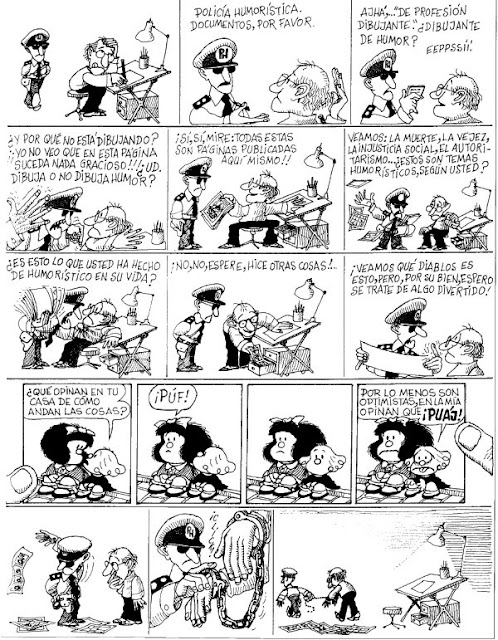 Unlike Mafalda, which had a surprisingly short run (1964-1973), Quino's adult comics have been produced on a continual basis ever since he quit his most famous creation. As a result, there are more books collecting his illustrations than there are of his Nancy-lookalike. 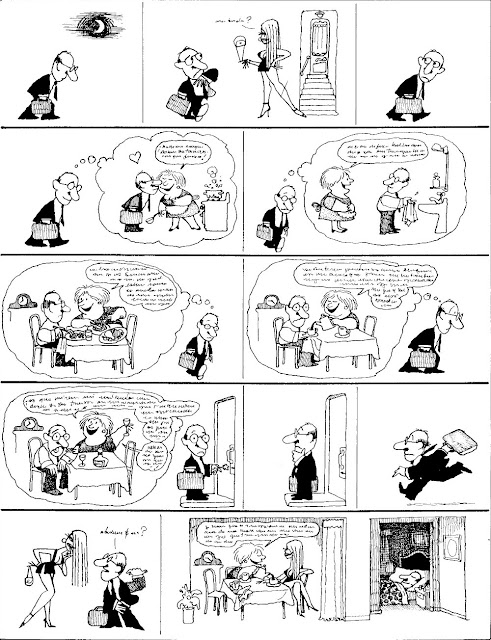 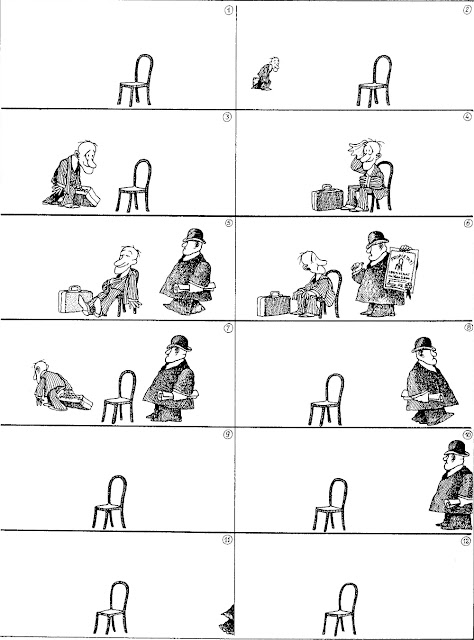 Of course, the trick would be to figure out HOW to properly organize all of them. Foreign collections are notorious for having multiple versions of a reprinted strip in several books, which hampers the enjoyment somewhat. (Not much, since his stuff’s a joy to look at) but can be a pain for those who want a complete version. Hopefully, it won't take a disaster or his death to increase attention to the man's work. Even Charles Schulz, from who he'd based his Mafalda comic on recognized the depths of his innovation. "The kind of ideas that he works with are one of the most difficult, and I am amazed at their variety and depth. Also, he knows how to draw, and to draw in a funny way. I think that he is a giant." 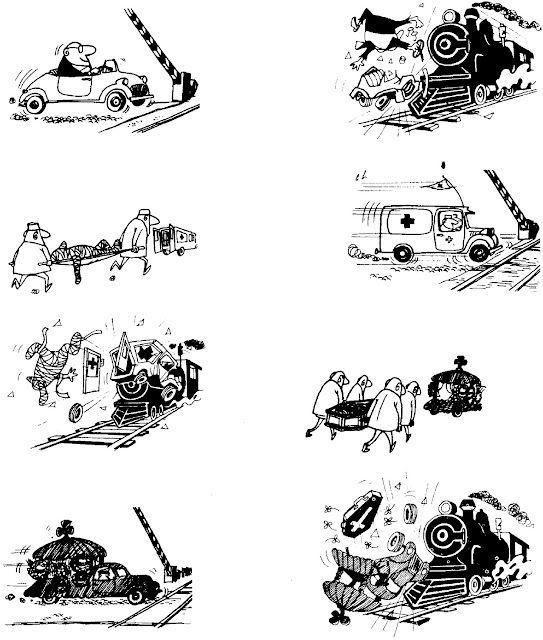 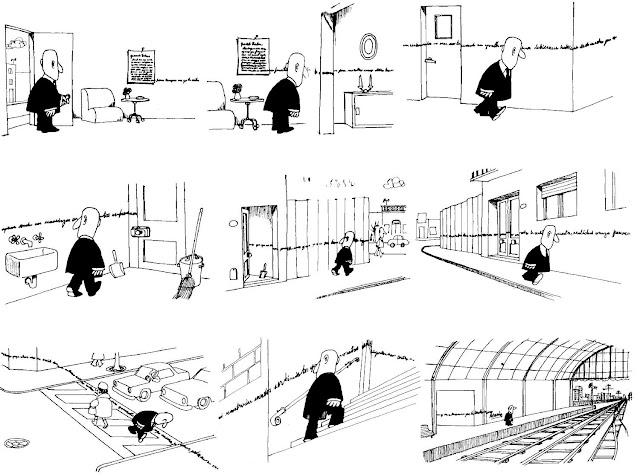