Upon finishing my last blog post, it occured to me that I hadn’t actually paid tribute to Harvey Pekar. I’d just referenced another comic strip that I thought Harvey would’ve liked. Of course, when thinking about American Splendor itself, I’m more likely to think of comics that seemed similar to it, without implying their influence. When two people stumble upon a similar idea, thier results might be very different.

Ben Katchor’s Cardboard Valise is even more user unfriendly than any of Pekar’s long-winded rants. It feels very much what an American Splendor strip would be like if it were a weekly. It’s even done in a very scratchy style that makes me think it’s how Harvey would’ve drawn it with his limited skills. 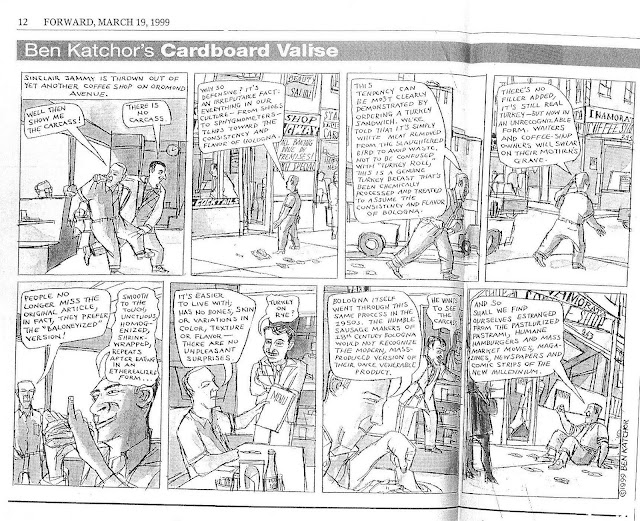 I was able to appreciate the early Harvey stories, mainly because of Crumb’s artwork. I first read his stuff as a child, due to my library having the 4th Crumb Book. This, along with the 3rd Barefoot Gen volume and an early What’s Michael? collection were my first entry into independent comics. (My mind was invariably twisted at a young age, thanks to these books)

First, a few omissions - I’m not going to include the David Letterman ones, since I’ve never been able to watch Pekar on TV. Until Youtube is able to close-caption the relevant interviews, I won’t be able to understand the appeal of the show. As faithful as the retelling of the behind-the-scenes comic was, I get the feeling that I’m missing a lot not seeing it in person. I can appreciate Pekar’s wanting to broach more serious issues on air, in order to appear as more than a quirky comic creator. It’s reminiscent of the Simpsons episode where Bart, after being strongly identified with a catch phrase (“I didn’t do it”), wanted to broaden his horizons. 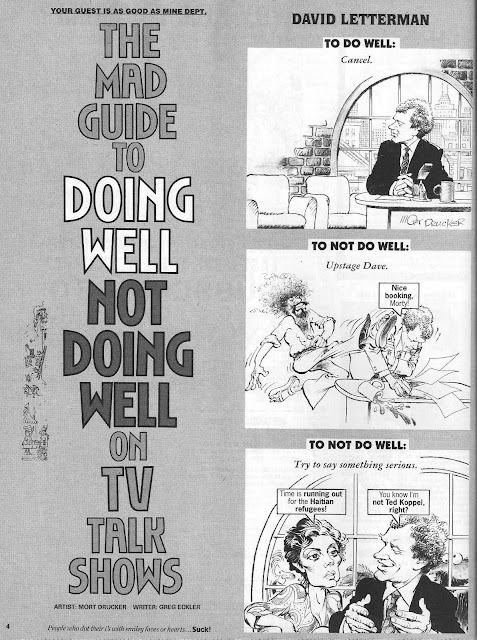 I’m also going to leave out Our Cancer Year. As much as I can understand the trailblazing of a difficult topic, both the story and artwork in the book leave me cold. I’ve never been able to appreciate Frank Stack’s artwork. The sole exception being a select few. (Check the honourable mentions section at the bottom)

I’m much more likely to read Pekar’s foray into having to deal with losing his voice for months on end. That’s more identifiable to me, even though the story goes on and on. But the length works, since you keep expecting it to get better, and it keeps eluding you. It also serves very well as emotional foil for what Pekar was going through, making you identify with the man more.

I’m also going to leave out his Jazz reviews. Obviously, being a deaf person, I can’t appreciate music in the same vein as he could. The only thing I can contribute is the metaphor I read somewhere that American comics were Jazz, and Manga were classical music.

And now, my favorites, in no discernable order! (Titles may not be accurate, as the books are currently out of the library, and are basically recalled from memory)

Who is Harvey Pekar? - This was the first American Splendor comic I read, after having read every other comic in the bookstore. What really makes this one stand out are the pauses Harvey takes to tell his story. They’re the comic equivalent of paragraph breaks. They give the reader time to reflect on the previous words, and switch to a similar topic without making the reader feel like they’re reading one long infodump.

Standing Behind Old Jewish Ladies in Supermarket Lines - a classic, and the inspirational scene in the American Splendor movie.

Jazz Addiction - Pekar’s continual obsession with Jazz records leads him to buy whatever stuff’s out there that’s worth listening. At a radio show, he makes a subtle play to steal some records from the place, but is foiled by a single locked bathroom door. After the downer, feels that he’ll never be able to break the habit, but is surprised the next morning that the bad feeling is still there. Apparently, the thrill was gone, and he was able to focus his energies into writing comics.

Christina - Pekar recalls a woman worker who was one of the most eccentric people he’d ever seen. Her activities included randomly kissing close friends, sleeping in the sun, rollerskating to work, and mailing pieces of written toilet paper from Alaska.

Stealing Papers - Pekar steals - borrows - his neighbour’s paper, and every little sound makes him sure his neighbour’s suspects that it was HE who continually stole his paper every morning.

Mourning - a man at work tells his co-workers that his father just died, and his mother was really mad at him. The reason being that, upon hearing his death, he asked if he could have his desert.

Before Noon - a man picks up a phone, and replies with “Before Noon”, and when the call’s finished, his co-workers ask why he answered that way. He said that since it wasn’t afternoon, but earlier, he said “Before Noon”.

Performance Art - a man dressed only in half a fish costume performs in front of a toilet bowl that ends with half the audience yelling and screaming to get outside, and the new unsuspecting customers to hear the baffling warning cry, “Don’t Kiss the Mermaid!!”

Kaparra - An amazing story about a Holocaust survivor who arrives at a camp. I’ll say no more. 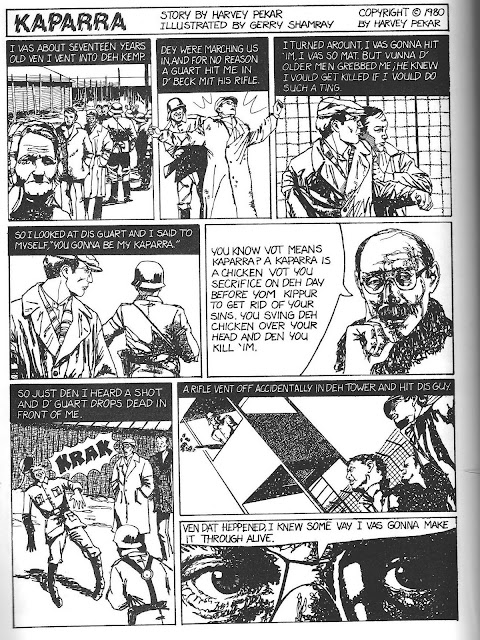 Maus Haus - a parodical work of a Jewish WWII survivor in the style of Maus.

Violence - Harvey talks about how he tended to get into fights as a kid, and how that continued with some close calls as an adult.

Broken Window - After Harvey accidentally breaks a garage window after saying he’d be careful, his father rushes towards him in a rage. Later, when he wakes up, he’s surprised to find himself lying in bed with his parents looking concerned over him. He’s also surprised to find out how much time’s passed, and why his parents weren’t upset about the broken window.

Jury Duty - Pekar goes to a courthouse, and explains his reluctance to be a juror, which causes nervousness on the prosecution side of the court. The defence thinks Pekar’d be a fine Juror himself. Ultimately, he isn’t chosen to be one of the finalists, but is able to get some reading done.

Stetsons - on a rainy day, Pekar winds up in a second-hand clothing store, and while looking around, chances upon some shoes from his childhood in good condition.

Autographing - Pekar goes to a comic store to do some celebrity signing, and only two people show up asking for his autograph. Later, one of the men who's in the arm and is interested in his work has a long talk for the remainder of the day. Before the store closes, Harvey and his wife choose several books to make up for the lack of customers sent his way. When the owner appoligizes for lack of business, Harvey feels that between the bargain and the conversation, he actually managed to get ahead in the deal.

I am a Man - Pekar’s bout with a clogged toilet leads him to remark a long-denied claim of ritual into adulthood. I’m oftentimes amazed at how people can manage to figure things out on their own without an instruction manual or textbook. Even more impressive if they’ve never done these things before.

The Quitter - in a direct reversal of the Shonen desire to be the best at everything, Harvey is so distressed at the possibility of failure, that he feels it's better to stop while ahead, rather than lose. As a result, he doesn't become particularly good at anything.

The Chester Brown Comics - In the brief five pages, showed his relationship with the Canadian artist. When I saw Harvey’s tense stance, he reminded me of The Brain from Pinky & the Brain. At the end of the 4-pager, Harvey mentioned liking Degrassi High, while Chester didn’t. As a fan of the show, I can understand why Harvey liked it. If your teenage media input is mostly 90210, then Degrassi must seem like a breath of fresh air. It also didn’t hurt that most episodes ended mostly unresolved. An example would be a character turning around to say a last line - and then the freeze right there. This used to drive me nuts. Even though I knew what the character could’ve said, I never got the closure I needed. The closest comic I can think of that perfectly emulates the “Degrassi ending” is the last story in Joe Ollman’s This Will All End in Tears.

Also, I find it strange that he prefered realistic art over cartoonier art, when most autobios generally favor the latter for more relatable narrators. Guy Deslie, Marjane Satrapi, David B, Art Spigelman and Scott McCloud all used cartoony avatars, and no one seems to think less of them for it.

This might be why he had trouble with Chester Brown’s self-caricature of himself as a Plushie Bunny. (If it makes things better, he used to portray his then-girfriend as a chipmunk too)

These are the stories that I like to read from the halfway point, rather than start from the beginning.

- A piece of history that eventually devolves into an argument about how Socrates was dishonest.

- Harvey has a caricatured arguement with Crumb over the quality of his work.

- Pekar sets up a matchmaker with an educated man and a ticket woman, and all the guy can talk about is the weather.

- The constantly changing relationship of a Jewish man Harvey works with.

- One of the few stories by Frank Stack I don't mind reading. Has Harvey at a comic convention, noticing that one printing of his American Splendors is of better quality than the other. After talking to a friend of his for the majority of the strip, almost sells him several copies, then suddenly relents, since he figures he should hold on to the good printings while he can, since “Y’never know.”

- The differences between Harvey and his wife.

- Harvey waits for a woman to get off the phone so she can drive him home, but loses patience and his temper, thinking she'll never get off, and starts walking. Later, a car comes alongside him, and it's the woman who was on the phone, who was wondering where he was. (I'm a lot like Harvey in his regard for losing control, and am lucky enough to be surrounded by people who understand me)

- Harvey's car breaks down, and is lucky enough to get helpful information from a nearby garage attendant when any other garage would've cost him much more.

- The aforementioned Asperger story. It wasn’t by Pekar himself, but was good enough to merrit a mention.
Posted by DeBT at 1:38 PM