Making sense of This & That

In my last post, I talked about taking That and That and That and... you get the point. I’d like to talk about the very first time I saw that reference. It’s what I think of everytime I read it. 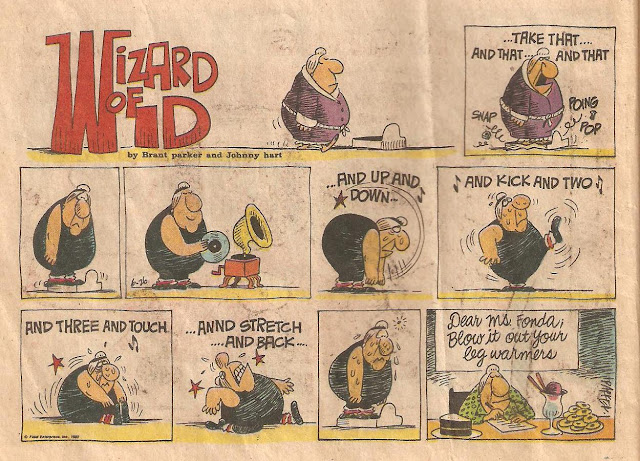 Like most children who first read comics, I paid attention to the pictures rather than the words. In this instance, I was stumped as to why the scale went from being broken to suddenly fixed again. In my mind, I interpreted this as the fat woman (Blanche) doing her best to break the scale, then looking shocked at it suddenly returning to normal. This led her to do some rigorous dancing with torturous music. When that didn’t work, she then wrote a polite letter declining her ability to break the machine properly.

If you only read comics for the pictures, this is the kind of inventive thinking that goes on in your head to try to interpret what’s going on. I had no concept of the throw-away panels at the time.

When Blanche was doing her split, what I thought the lyrics to the music was saying was “And do it all over the world.” Even now that I know what it really says, I still think of that panel with those lines.

Ironically enough, when I read an Archie comic that was naturally silent, I implanted conversations the characters had just by their body language alone. When I was able to read and went back to that comic, I was surprised to find out that there were no words there at all.

There’s a common misconception that teachers of Deaf students have - they believe that Deaf children should learn how to talk before they can read. This is completely backwards for someone who can’t hear. Yes, language is an essential part of growing up, but it has to be in a form that the child can understand. It’s an easy misconception, since hearing people are so ingrained in their usual habits that they can’t possibly conceive an alternate way of communication. For me, I practically grew up reading comics. If I was shown a nice shiny apple, I would pay no attention to it. But if I was shown a grocery ad about apples, I would get all excited about them.

There’s a woman in Alan Moore’s Top Ten series I’d like to talk about briefly. In the world of Top Ten, everyone in the world has a Super Power, and it focuses on a police team who monitor the going-ons in the world and try to keep the general populace safe. One of the members, Wanda Jackson is synaesthetic. In her case, her ability allows her to convert smells to music.

This was a concept I identified with since whenever I read comics, I always converted the words to pictures, and the pictures to sound. For a long time, I thought everyone else was able to do this naturally. It wasn’t until I read a book that dealt with conflicting personal realities that not everyone else might think the same way I do. I asked around, and apparently, I’m unique in this regard.

It’s why I have such a hard time reading old American Superhero comics. When I distill their images to pure sound, it’s a constant PMM tt tt PMM tt tt PMM tt tt PMM. Each PMM is the action scene, and the tt’s are the intervals in between. It might work well in the short form, but when a lot of these old-school comics are collected, it comes out as repetitive noise. For people who thrive on consistency, Superhero comics are a form of comfort food. But I can’t live on one unvarying tone forever. I need other sounds to keep me interested.

It would be too complicated to accurately describe the sense I get when I read certain comics, so I’ll generalize. Newspaper comics are catchy jingles. European comics are concerts. British comics are Jazz. Shojo Mangas are Lullabies. Shonen Mangas are Punk Rock. Josei Mangas are the Blues. Seinin Mangas are Gritty. (I couldn't find a general noise that could be described as Noir - Gritty is the closest I can get)

What kind of music do you feel when you read comics? I'm not asking what music you like to play in the background, but when you look at the pictures, what sounds do they convey to you?
Posted by DeBT at 7:06 PM