One particularly amusing thing while browsing through old Newspaper comics is how often they'll decry the radical advancement of scary technology. 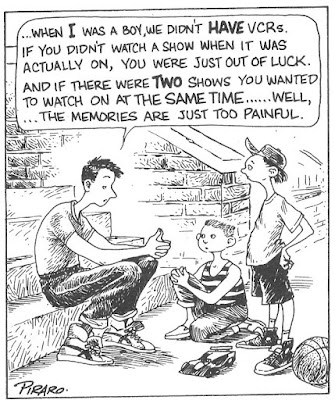 Advancements that surely must seem like old hat by now.

Advancements made that what once seemed outlandish has now become reality. 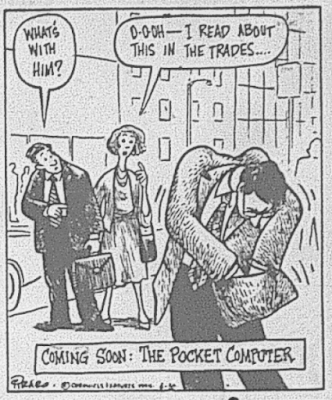 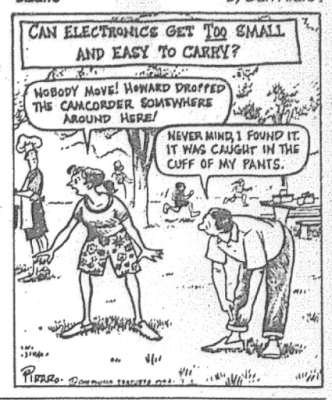 Who would ever want digital writing pads?  And computers that can fit in your pockets?  And use Computers to watch TV?


I’ve already posted Cathy’s response to entering the intimidating world of computers, but I’m including one of her responses I missed. 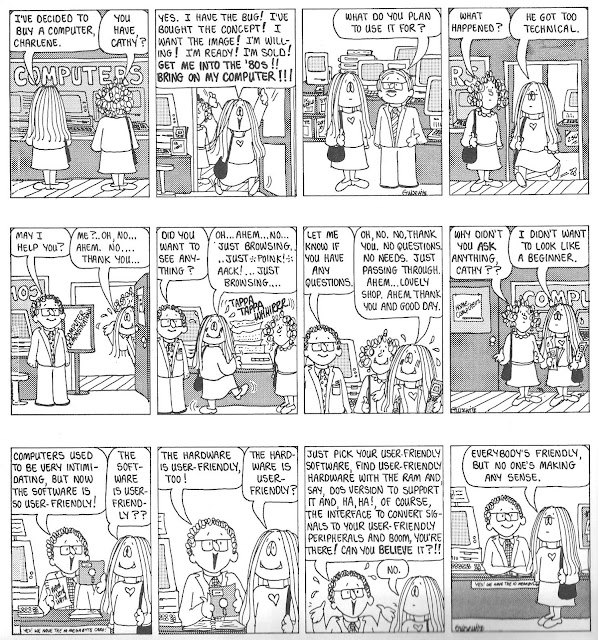 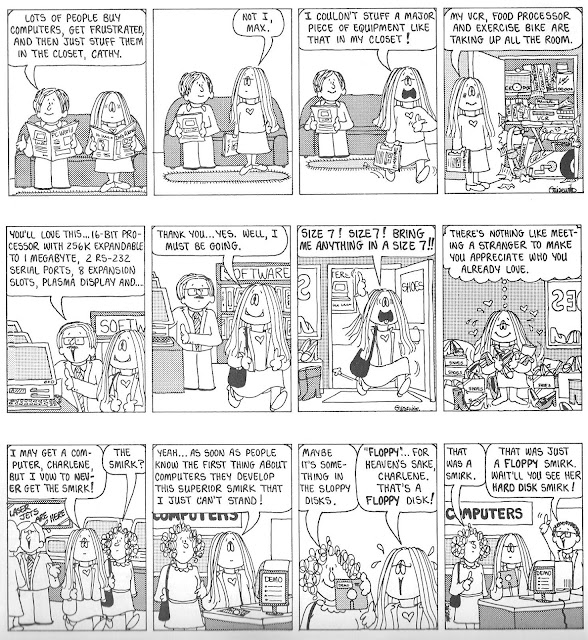 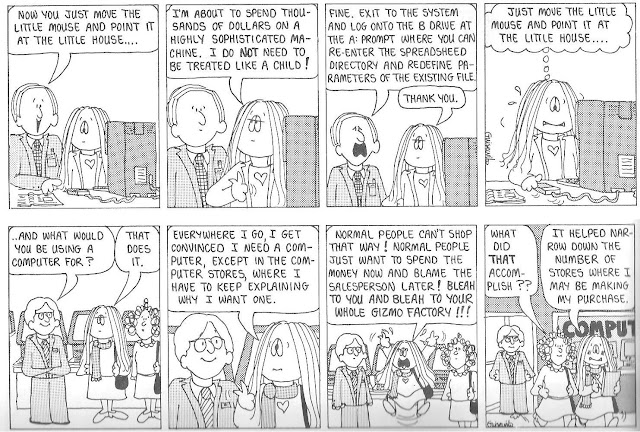 Considering how ubiquitous cell phones are nowadays, it's hard to remember a time when just trying to contact someone on a shared line was great cause for trauma. 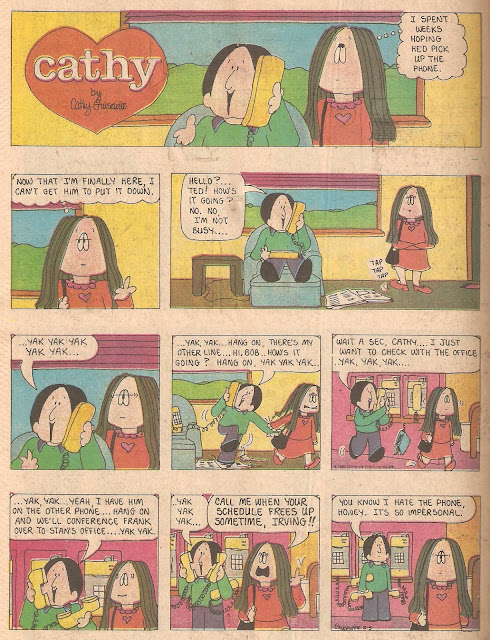 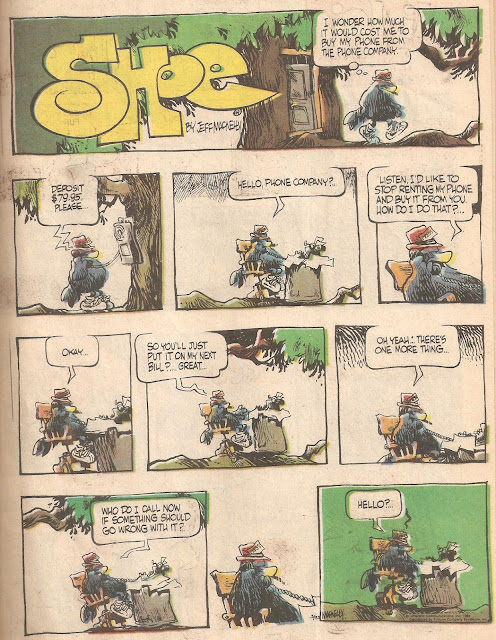 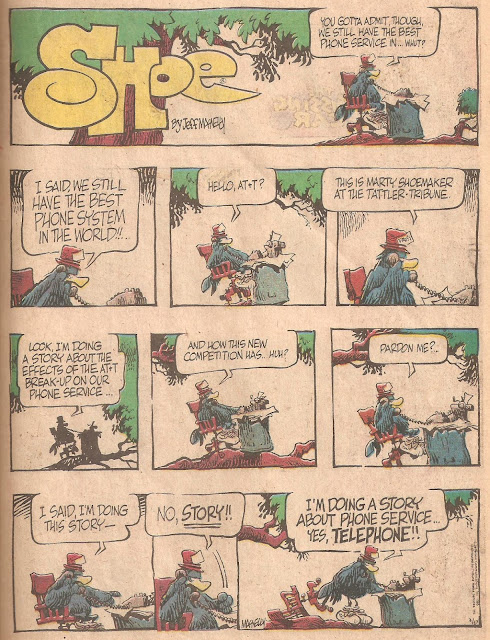 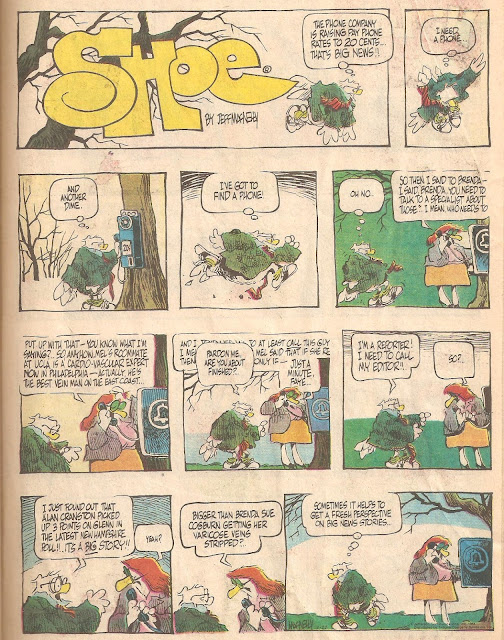 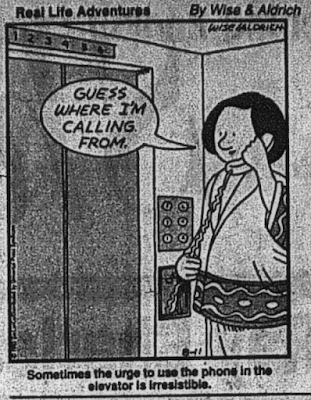 It's a common refrain that in these stories while showing a newfangled advanced machine beyond the limits expected of man, they'll show said device having disastrous results, being little more than a major inconvenience... 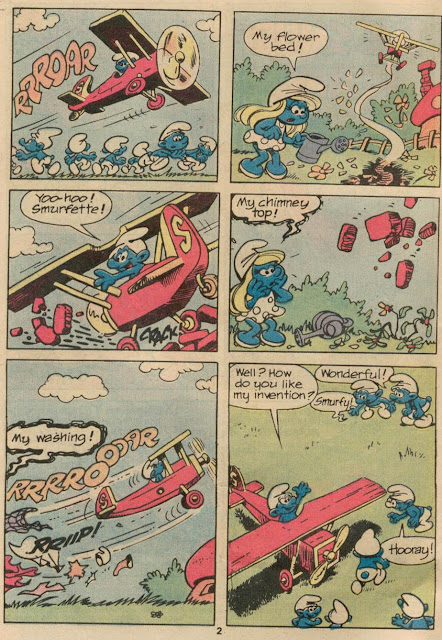 ...until said device is actually needed and gains the favor of the populace that once spurned it.  You see this kind of stuff ALL THE TIME. 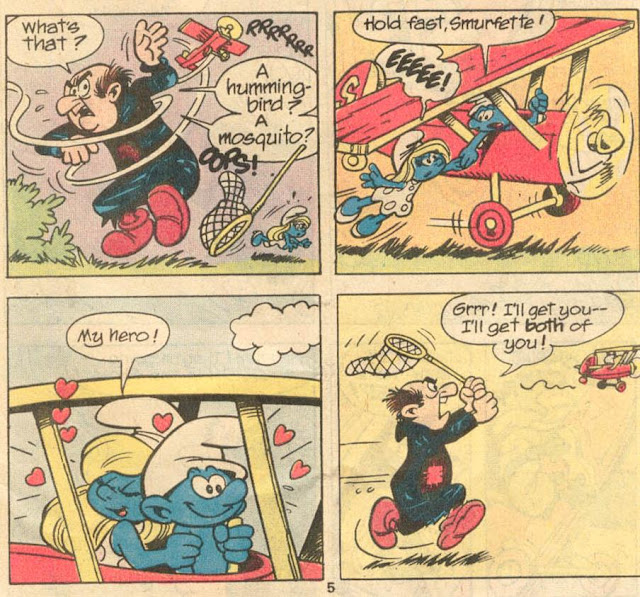 In Sazan (3x3) Eyes, there's a mini-arc where a Demon is digitized into data that can fit on an old-school floppy disk. 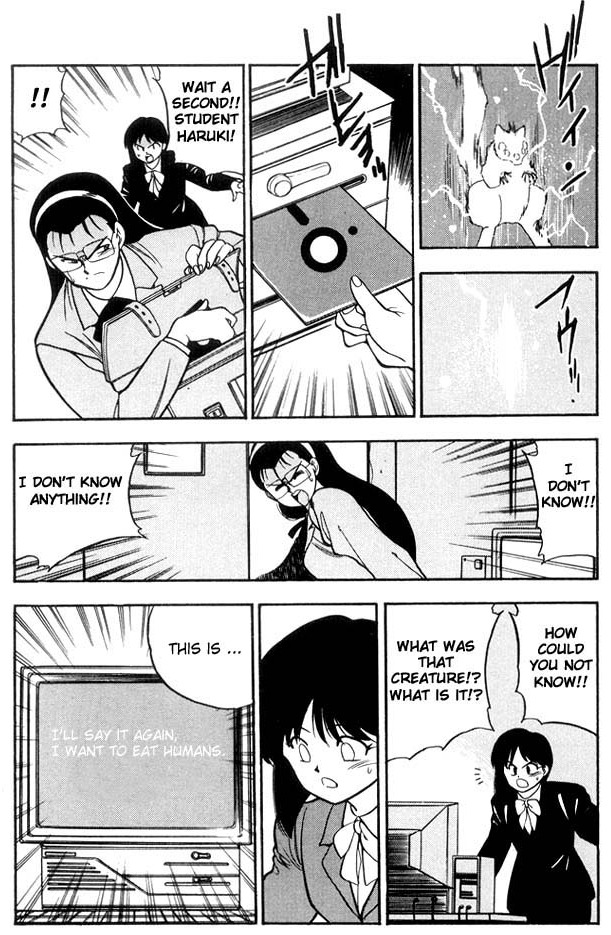 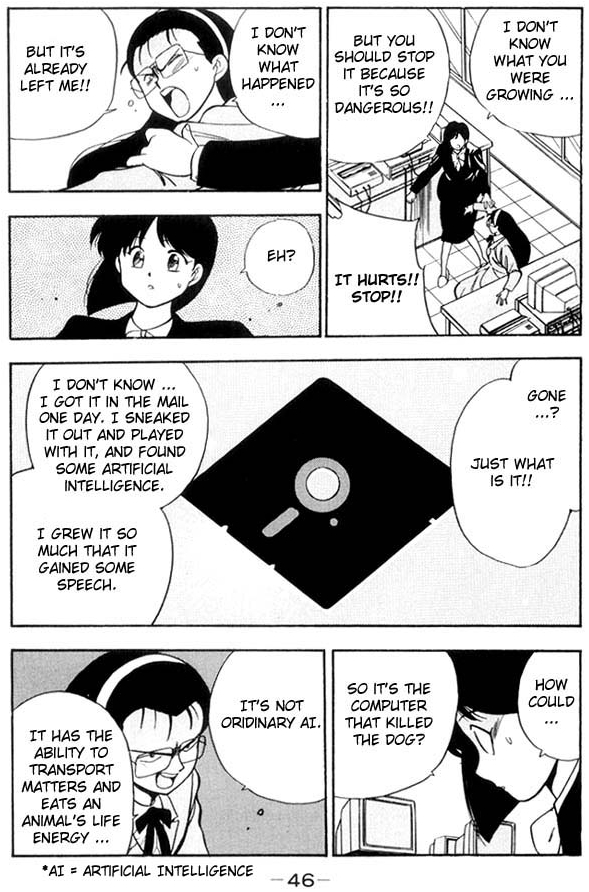 Keep in mind the 8-inch models had a maximum capacity of 80 kilobytes.  That's some impressive compression there.  It's along the same lines that allowed Optimus Prime's personality to be saved the same way.  If your memories only take up that much RAM, they can't be that impressive can they?

Since they can't exactly show Terminators terminating, Newspaper comics have to settle for attacking the latest newfangled device designed to confound their aging target market of old people bewildered by all these bright shiny new toys.


Possibly the weirdest negative usage of Technology I've ever seen was in a forgotten Newspaper comic, Gramps, where the microwave created a sentient slice of meatloaf.  With such an outlandish concept, you'd expect plenty of amusing commentary.  When I first read it, it was outlandishly amusing, but rereading the collected story now, I'm struck by how... dull the execution is.

When it comes to complaining about technology, no other strip did it as much or as often as Shoe did.  Here's some early comics about computers right off the bat: 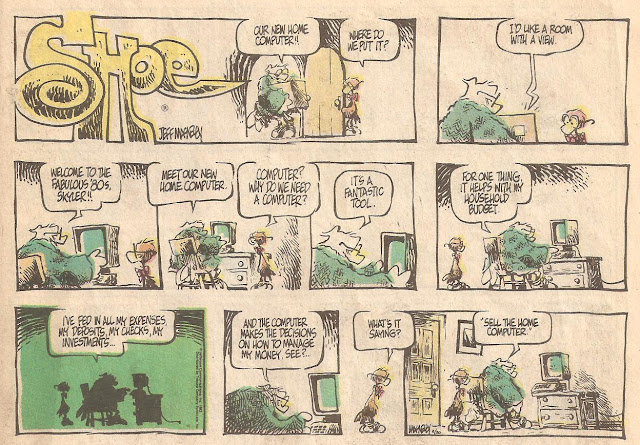 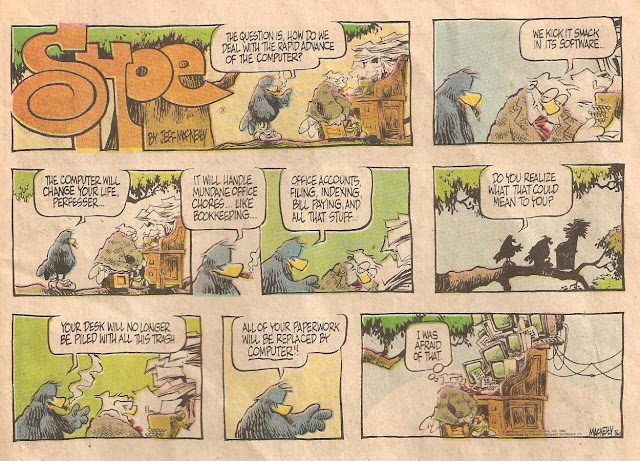 The presence of Computers was little more than another tool to be used around the office, and wasn't seen as being too helpful at first.  It always takes time to get used to the latest new things. 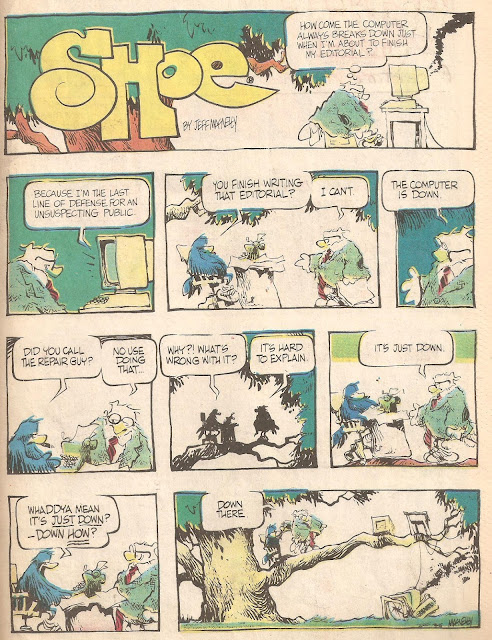 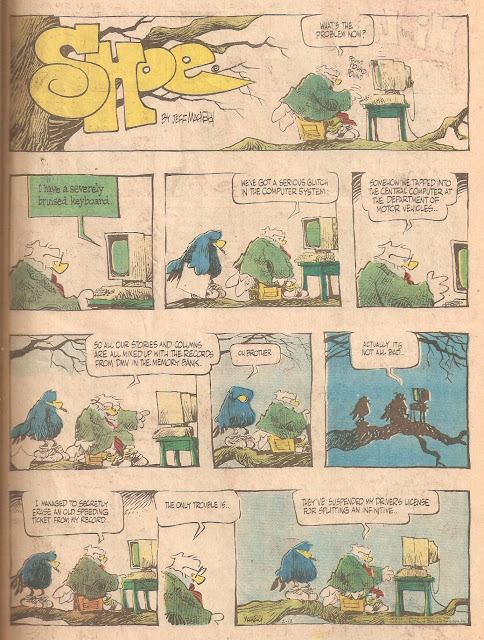 What other strip would praise the merits of using old writing tools of a bygone era? 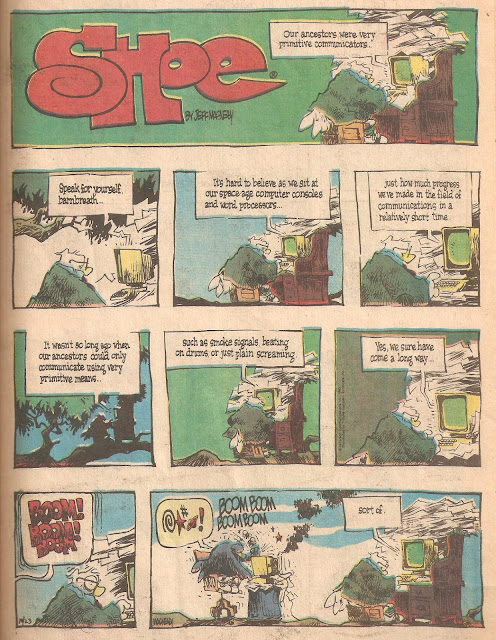 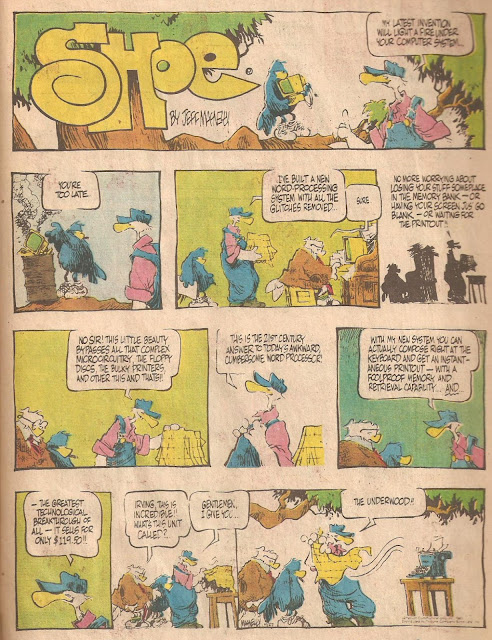 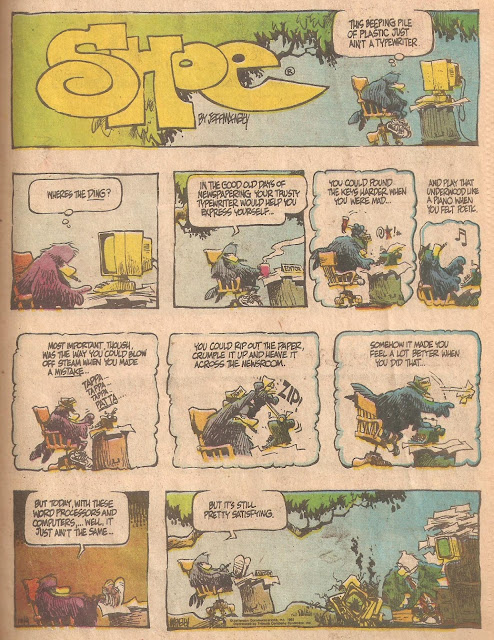 The introduction of computers in the modern age also introduced a side character who would fill the role that wouldn't normally fit Irving the junkyard mechanic - the Computer Wizard.  I'm sure that when Jeff MacNelly first penned this guy, he never intended for him to become such a reoccurring character.  But just look at his design - for a computer technical/repairman, he's practically unforgettable. 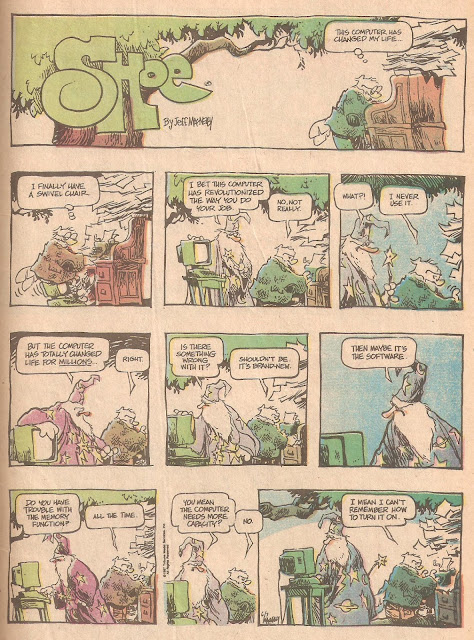 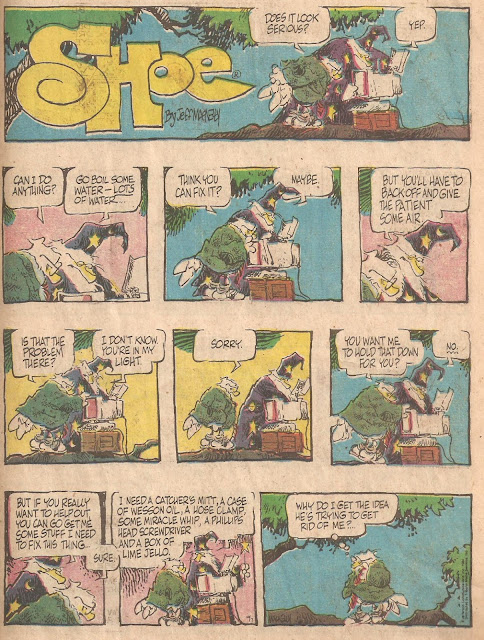 Now, here's a strawman argument that while reasonable upon first impression, can now pretty much be laughed back on.

Methodically going through old newspaper comic archives at a rate of 10 days a week can yield some intriguing strips that went completely unnoticed by the bigger popular comic juggernauts.  Not many people think that much about Hi & Lois.  It's fairly amusing, but there's not that much substance there, and continuity is fairly static, save for the rare continuing storylines.  First, there was a short part lasting 3 days, then there was the arc where the family went to Disneyworld.

But I believe I may have found the zeitgeist of the strip's ambition in its later life.  Before that, I want to show another quick story about Hi coping with bachelorhood as Lois goes on a business trip with all the cliched reactions you'd expect.  For some reason, it starts on a Saturday, which then runs the gamut a full week, only concluding until next Monday. 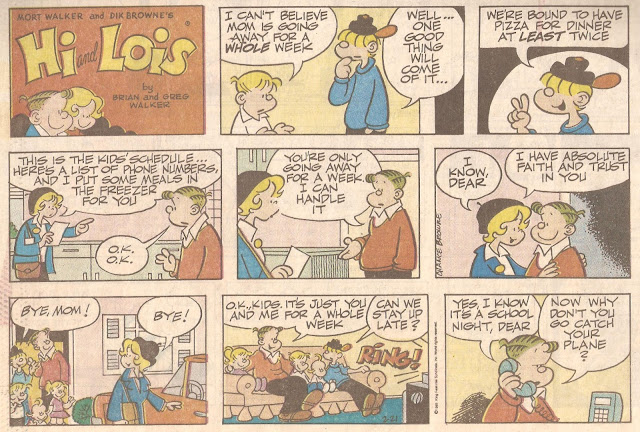 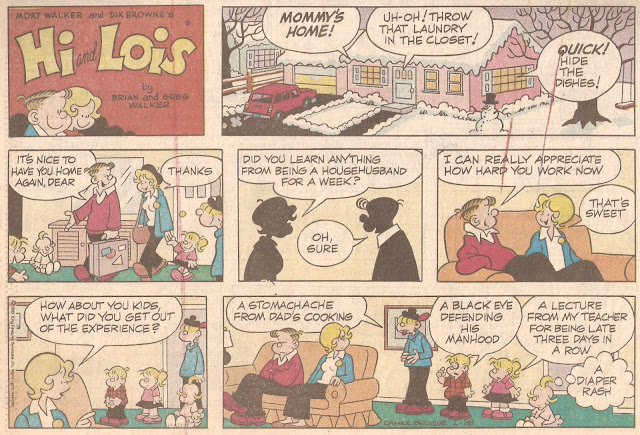 I've mentioned before that there was a loose connection between Lois and Beetle having a family relationship that was rarely explored.  It was just something thrown in to make their world seem bigger than it actually was.  That while the Flagstons were doing their harmless family outing things, Beetle was out in the army doing his best to avoid doing actual work. 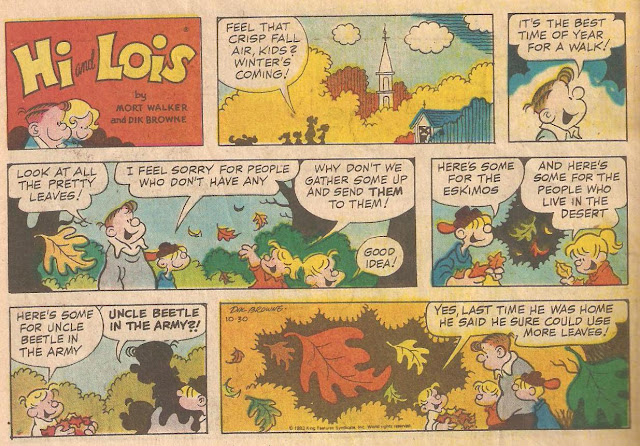 So, for a brief week, their two universes concided.  Depending on the order your comics were arranged on the page, you could either see Hi & Lois or Beetle first.  In my case, it was the former, so I've taken the liberty of arranging them to be chronologically consistent. 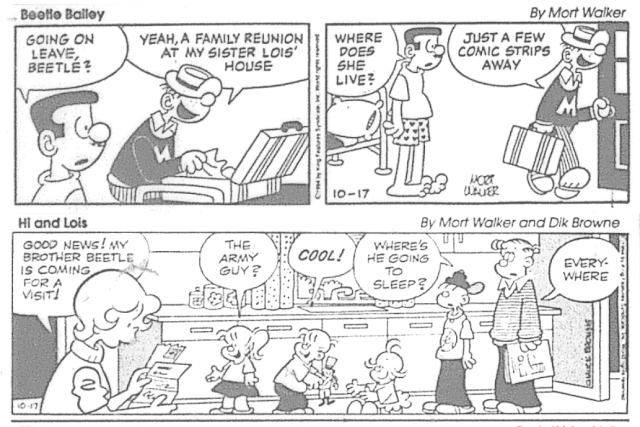 If you look in the background in the above 2nd panel, you can see a brief outline of Hi and Beetle's parents.  Despite their cameo role, they don't interact at all, which makes their presence something of a wasted opportunity. 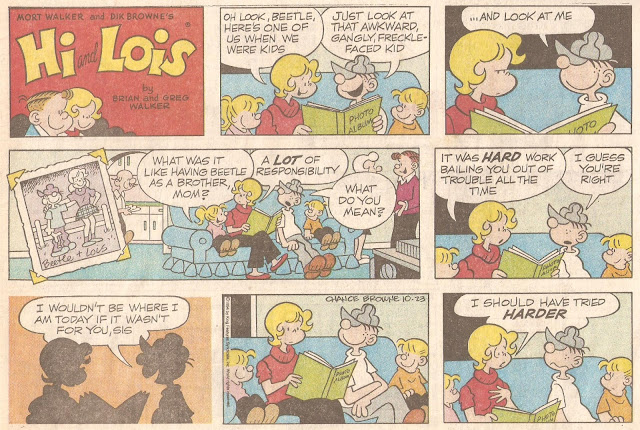 One thing that should be noticed is that while Beetle was hanging around the family, he didn't show up at all in his own strip.  Since there's a wealth of side characters who can take up the flack, his absence wasn't noticed... save for one guy.

And while Beetle's brief furlough into civilian society ended, the Beetle Baily strip the very next day welcomed back his presence, focusing on the important questions.