Back when I hesitantly gave my first comic submission to Square Root of Minus Garfield, there was only a small smattering of volunteers who were willing to give a try.  That pond has now grown larger than its current output of one comic a day can provide.

The backlog of SROMG has grown so large that the chances of my later strips being seen anytime in the future is now increasingly remote.  I Almost submitted the missing ones on my blog last year, but then, my entry, Suicide Hotline, (which I was particularly proud of) showed up, and I decided to wait another year.  If none of my other comics showed up until then, I wouldn't show them.

These comics haven't been seen by anybody, save for the moderator of SROMG who switched owners in 2015 to its current moderator, who has their own backlog of new comics coming in all the time.  They haven't been seen since I made them in... (checks creation date) 2013, so they're a little overdue.  And not seeing my works shown up in rapid succession has been a major damper in my creative process.  I haven't made any new Garfield comics since then, including what I thought would be my Last comic - a collection of all of Lyman's appearances into one comprehensive Lyman contribution strip.

With that out of the way, here's the remainder of my Garfield Comics, with author commentary at the bottom: 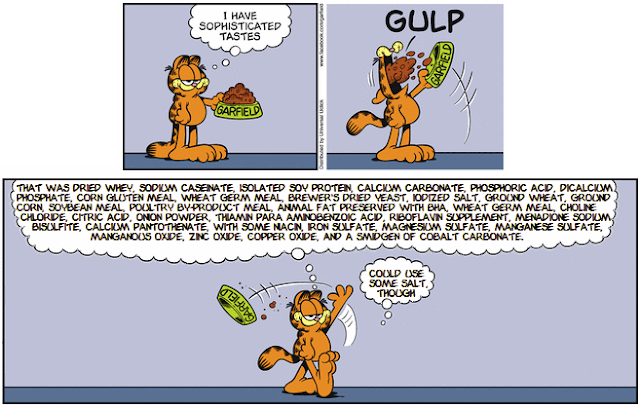 Considering that there are food connoisseurs out there who can deduct the quality and quantity of foods down to their most basic cooking instructions to how long each ingredient was prepared,
it only seemed natural that the reciprocal for such a talent would eventually find its way through breaking down cat food to the basic elements.  There are sophisticated snobs concerned about how much meat Fido gets in their Bowl-o-chunks.  Probably the ONLY ingredient missing from the vast list of chemicals would be artificial food dye, but since their addition is more for the owners buying food and not their colourblind pets, this omission is somewhat understandable.

It occurred to me that after seeing the static lazy use of repeat panels that it would only be a matter of time before all future Garfield panels were virtually indistinguishable from each other, down to the background colour.  Also, considering it's not impossible for a Garfield generator to use two different panels of the same strip, the probability of having similar-looking panels becomes considerably higher.

Following that train of logic, it would only be a matter of time before there were some repeat panels from the later years, and a higher chance of seeing duplicate panels next to each other.  Therefore, what would normally be the punchline would become the opening panel, with the remaining panels being exact copies.
Originally, this was going to have the first panel at the end, but I thought it would get its point across if it was shown from the start.  If you look closely, you can see the copyright text between panels is mixed and matched between the two as typical of various randomized Garfields.
The monologue comes from two variations of a Blender comic.

Just Look At That Gorgeous Garfield Minus Garfield 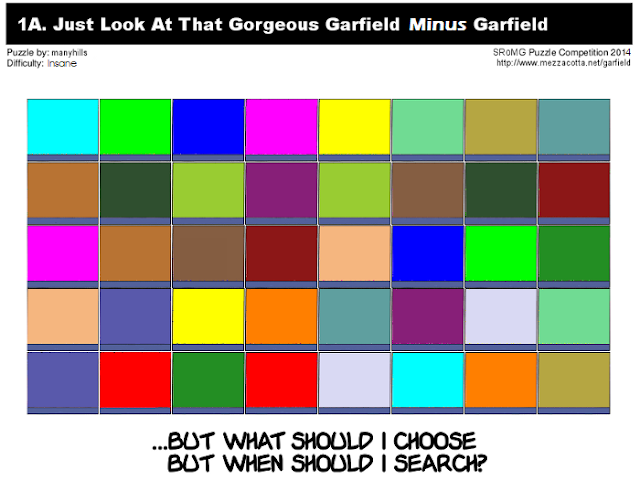 This one is going to take some explaining.

A frequent contributor, Manyhills, submitted a Garfield puzzle that left many readers baffled as to the content of the hidden word, which is (was) still being debated on in the forums.  Even with all the hints dropped in, hardly anybody got close to getting an answer.
The ACTUAL solution turned out to be a chain of random tactics so obtuse that you'd need to be a mind reader or web hacker to be able to figure it out.  The answer was a series of numbers referring to the date of a comic where Jon asked himself what the Capital of Nebraska was.  (Bismark)

What made this really infuriating is that the answer was so far from obvious, and it was labeled "Easy".  (Check the difficulty rating on mine.)  So I thought, why not make an already hard puzzle more difficult?  The result is something akin to a Mondrian painting, only with more colours between the lines.  It's my first time editoralizing someone else's work to reflect the audience's reaction, but I think it fits.  Bonus points if my comic managed to generate more answers than the former. 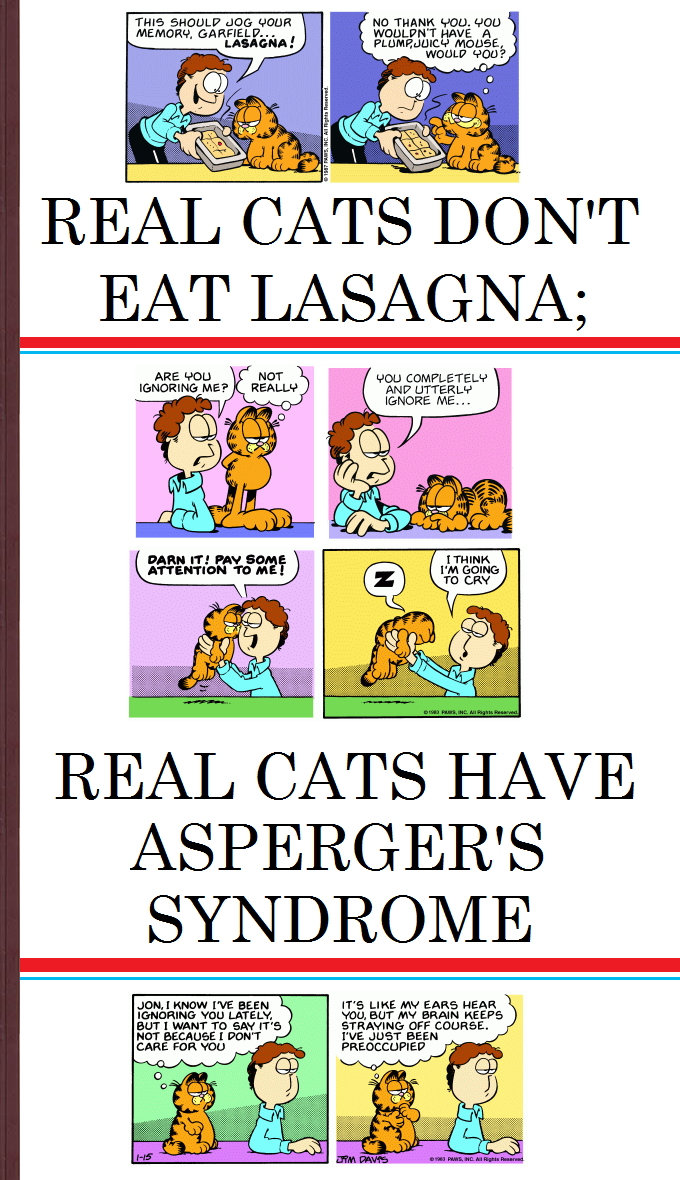 This was largely inspired by crossing Real Men Don't Eat Quiche with the children's book, All Cats have Asperger's Syndrome.  I shared this with members of my Asperger group, but wondered why it never showed up on SROMG.  It wasn't until now that I realized that I never actually submitted it as an entry.  Kind of a waste - I insisted on privacy, wanting to wait until this comic would show up on a veritable site before sharing with a wider audience, and wound up self-sabotaging myself in the process. 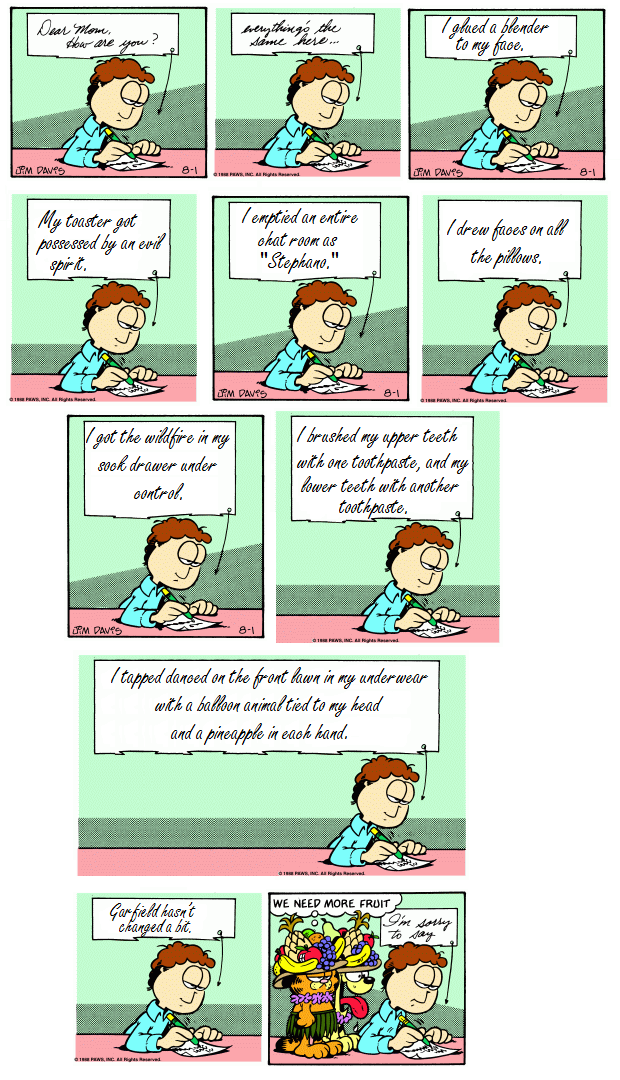 These are all things Jon admitted to doing in front of Garfield on a regular basis.  One wonders just how he would be able to relay this level of weirdness to his parents.  It would be on a level of open honesty.  In an early strip, Jon pretty much admitted to his mother on the phone that his washing machine spat out his jockey shorts.  Since his mom and brother routinely sent letters along the lines of "The chicken died", and had their picture taken next to the world's largest corn cob, this kind of reply of everyday routine wouldn't be entirely out of character or place.  Without the visual aid of weirdness or the surprise setup, something's bound to get lost in the transition. 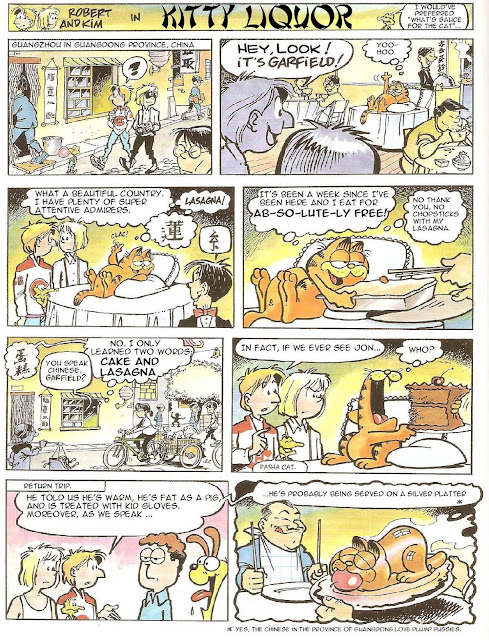 Actually, a more accurate description for this would be “Canadian Garfield”, since this parody showed up in a long-running French children’s science/nature magazine, Les Debrouillards, drawn by the indefatigable Jacques Goldstyn.  The children are accompanied by their mascot, a talking frog named Beppo who provides the role of the chorus.  Interestingly enough, a spinoff of one of Jacques’ characters, Ivan the inventor is also published in China.

I had planned to showcase a feature on Debrouillards, and requested the moderator of SROMG not to release this until then.  But since that would require scanlating French comics, my desire to do so kept falling away over time, and I never got around to it.

I'm surprised no one's thought to make a correlation between the real-life Arbuckle and Garfield's owner, especially considering the implications of his film nickname, "Fatty". 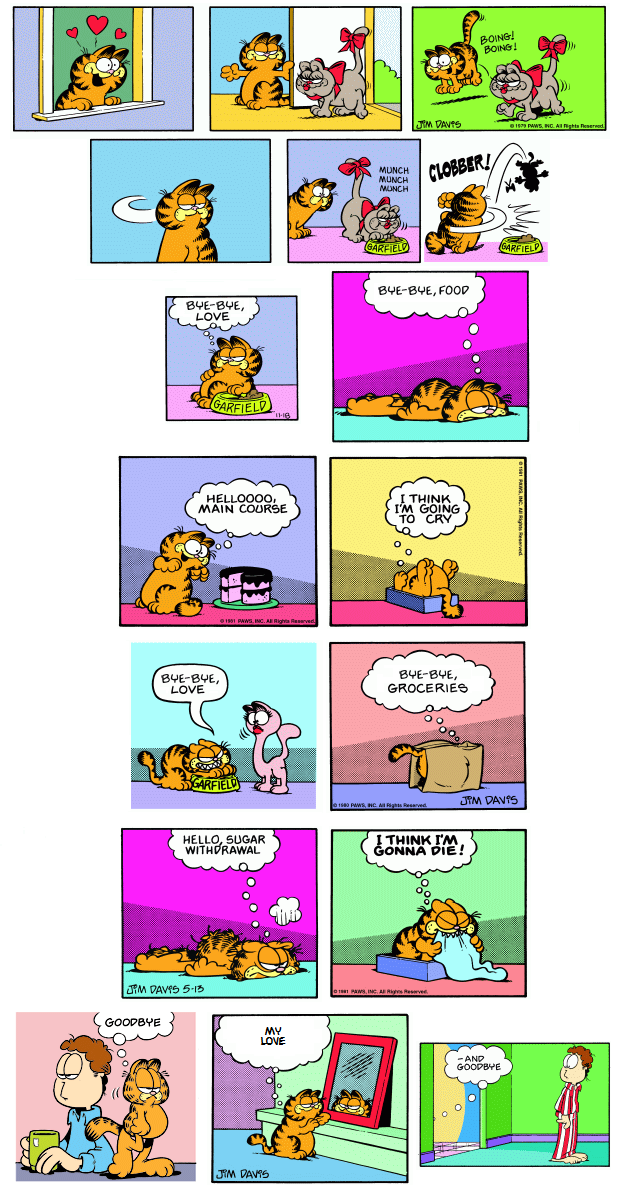 Although I'm deaf, I was still part of mandatory auditorium attendance in Grade school where we were to sing out lyrics to 50's songs such as Rag Mop and Anything You Can Do.  The presence of an overhead projector showing the words made following along much easier, and is only how I'm aware of these ditties in the first place.  It's probably funnier if you sing the lyrics to the tune of George Harrison's Bye Bye Love.  What's amusing is how little I had to change the words to most of these.  I was considering doing something similar for "Shoo Fly", but couldn't find enough references, since music isn't really my thing.  That's more Manyhill's field.
Nermal Manga - Director's Cut

Years ago, I made a Nermal Manga using Chi's Sweet Home as a base.  (An obvious reference.)  What is less known is that I submitted a potential sequel later.  This was something I'd planned to use in the first comic, but felt it was already running on for too long, and couldn't figure out where to place it anyways.  If you interpret the dialogue there, it could seem like "Nermal" is waking up in the last panel.

Inspired in part by the infamous Kitty song from The Big Bang Theory.  Only, I couldn't leave it well enough alone, since I wasn't entirely sure if there were instances of either Nermal or Odie being bounced around.  After some customary searching, I found results for both, and decided not to remove either, but keep both, and show how the lyrics for one would've inspired the other.

I also wanted to use a more lively atomic particle in a similar vein to BBT's animation segments, but couldn't find one.
(In case it's not obvious, Nermal hiding in Garfield's jacket in the 2nd panel is a "hot" item.) 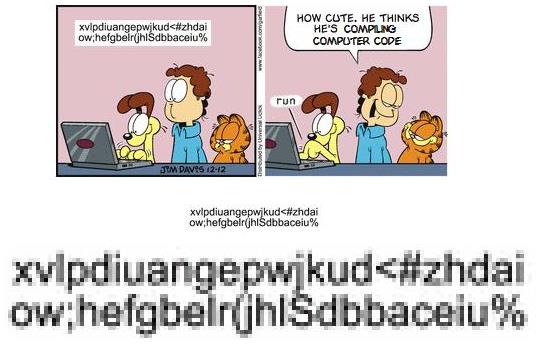 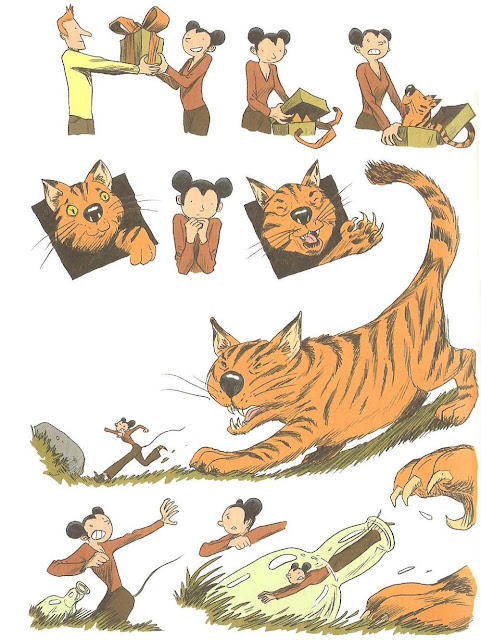 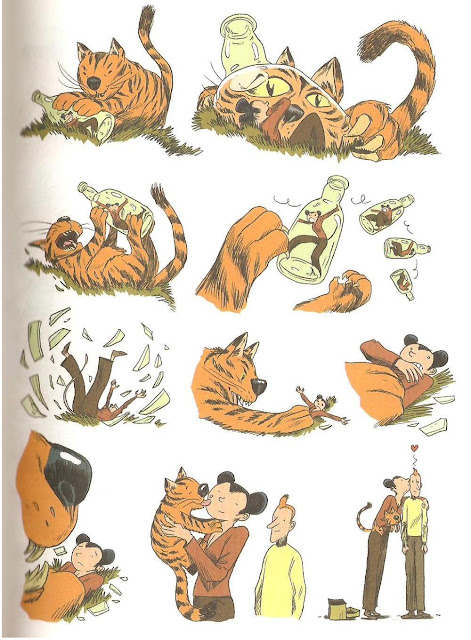 I found a silent French comic titled Odi's Blog by Sergio Garcia and Lola Moral, and naturally thought of having it somehow tie in with the dumb dog who occasionally shows flashes of genius from time to time.  Even Jim Davis is somewhat elusive about the full extent of Odie's mental capacities.  It's also an apt metaphor for how uncommunicative people think in unconventional means.  Just because somebody is nonverbal doesn't mean that they're not smart in other ways. Dyslexics manage to be incredibly inventive despite their handicap of not being able to read. 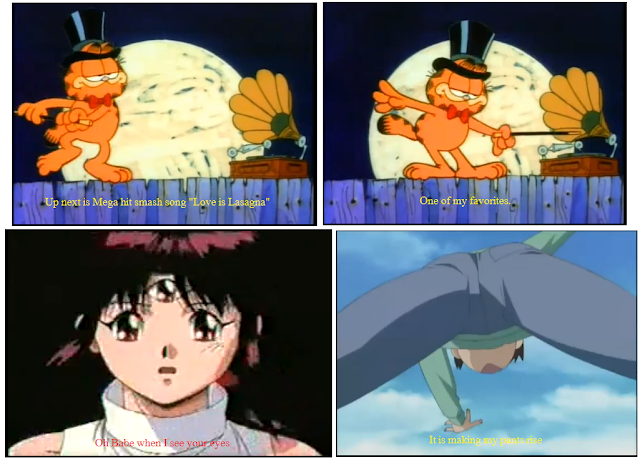 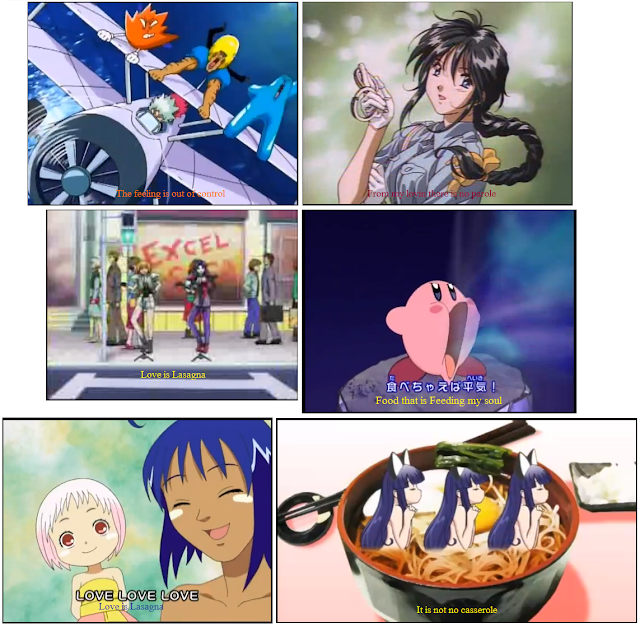 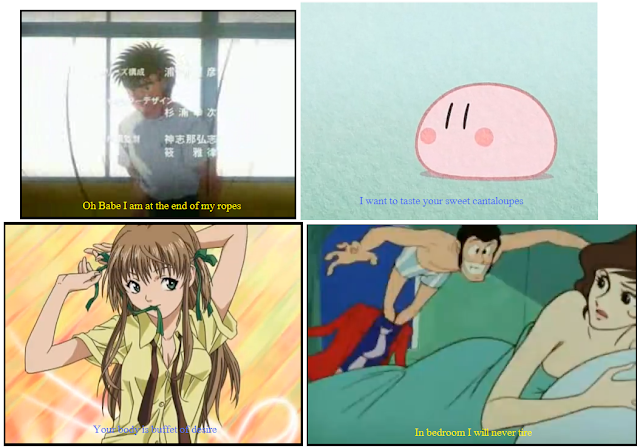 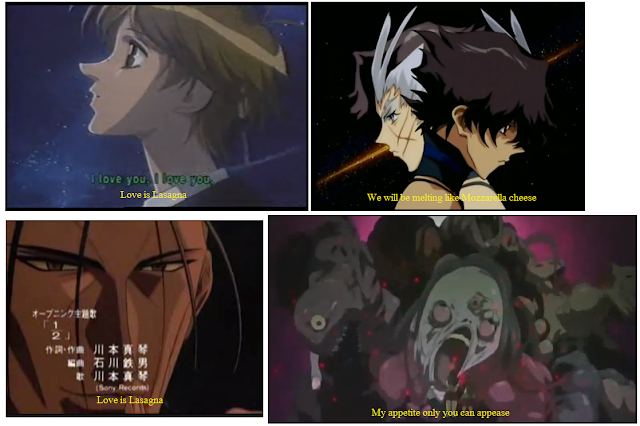 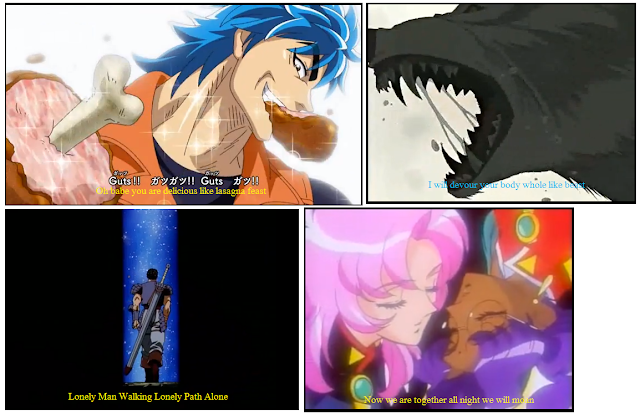 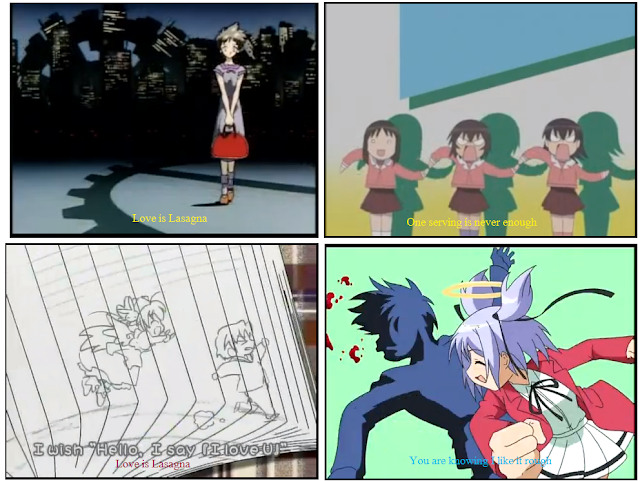 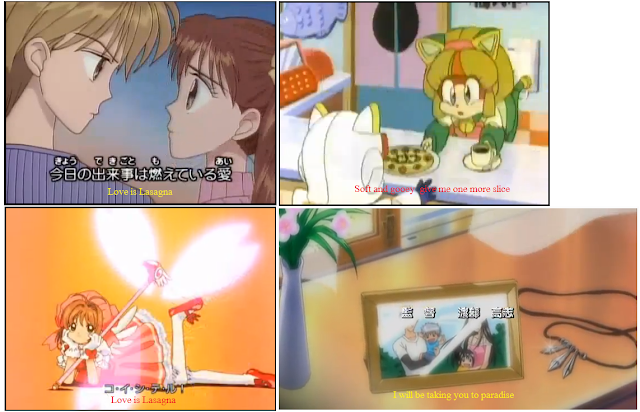 This is probably the most obscure referential material I've ever done.  The song lyrics are from ShakespeareHemmingway's legendary so bad it's good fanfic: Garfield, Prince of Tragedy in "Royal Rescue Part 2".

I started thinking about what the opening for Garfield & Friends would be like if it were done as an Anime, with their lingering quality and extended length of J-Pop lyrics.  Originally, I started out trying to find the Japanese version, but that was hampered by a lack of knowledge of foreign countries' translations and lazy internet searching.  (I gave up after two pages)  The result is something less than Every Anime Opening Ever Made and something more along the lines of an Anime music video.

My intention was to use double-entendres for the Japanese lyrics, but the lack of matching imagery and text meshing together forced me to revise this plan entirely, and I could only use my proposal for a select few scenes that had a happy coincidence.  Turns out there are a LOT of Anime openings with the word "Love" in them, which helped salvage my search somewhat.

For less enthusiastic Otakus out there confused about the frames, What follows below are the Animes I used, along with some notes for fansubbed lyrics that closely resembled the homaged song at the relevant screenshot in question:

3x3 Eyes
Love Hina (In the next shot, Shinobu is hanging up some laundry, which is another interpretation of the "making pants rise" line)
Bobobo-bo Bo-bobo
You're Under Arrest!

Hajime no Ippo
Clannad - "A kind sweet bean dango" (This is kind of a cheat, since it comes from the ending theme song, not the opening)
Yakitate Japan
Lupin III

Key the Metal Idol - "Why can't I show (Love you so)"
Azumanga Daioh - "The temptation of wheat" (a fair assessment of "One serving is never enough")
Pita-Ten - I wish “Hello, I say “I love U”
Club to Death Angel Dokuro-chan - "I’ll cut you, punch you, toy with you..." (This was the gentlest relevant torture scene I could find)

Kodomo no Omocha - "Today’s incident is burning love!"
Samurai Pizza Cats - "Go eat a pizza pie!"  (From the vastly superior American version)
Cardcaptor Sakura - "I’m - in - love - with - you!"
Groove Adventure Rave - "I'll give you paradise" (The main inspiration that led to all this)

For Garfield's finishing lines of "What good singer.  Could use lasagna cigarette", I referenced mangled Engrish and how yellow subtitles would look practically invisible without proper shading.
Posted by DeBT at 8:04 PM