In the mid-90s, there were all kinds of wild experimentations done in Newspaper comics, the old guard throwing out all kinds of new tactics to deal with the sudden innovation and popularity of competitive strips and trying to figure out what would stick.  Most of them flailed about and didn't accomplish much, but it was still interesting to see them try.

One of these instances of creativity was the introduction to some minor characters to the cast of Hagar, starting with a Troll.

Apart from a trite Beauty & the Beast message, there wasn't anything that particularly stood out about Tyrone, and he only made one stock appearance later.

It was only then that I realized that what struck me as him looking so familiar was that his face was a random Don Martin character.

Another sporadic attempt was to give Lucky Eddie an inconspicuous pet. 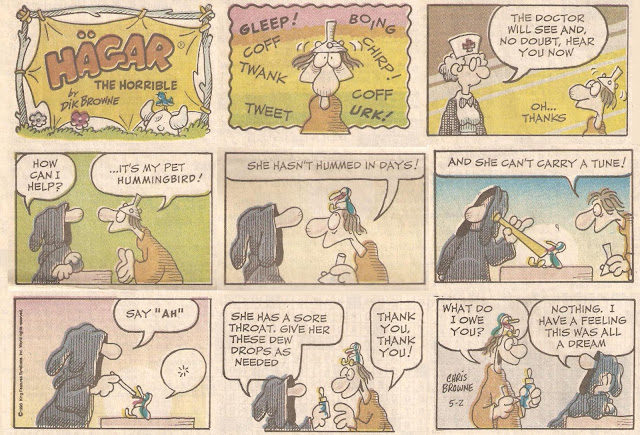 All this is mere conjecture to set up what proved to be the most popular and long-lasting minor character thus far - a silent fire-breathing baby dragon.

At the end of this arc, where the baby dragon eventually wound up being Dr. Zook's pet, there was the appearance of another minor character who sporadically showed up - Gork.

But apart from having a Thor-like physique and being a potential suitor for Honi after her tryst with Tyrone the Troll, he was virtually indistinguishable from anybody else, and was quickly forgotten.

Speaking of Tyrone, if you look at his last appearance above, you'll see the baby dragon next to Dr. Zook.

Also, the gender of the baby dragon changed sporadically.  Some days, she would be a male, others a female.  Eventually, for the sake of variety, it was settled to be a girl, and all instances of mistaken gender identity were quickly forgotten.

As you can see, for most of the dailies, the baby dragon is a "he", but for the Sunday comic, "he" suddenly becomes a "she".  It was as if Chris Brown couldn't be bothered to remember the difference.

The majority of these strips were found in the later months of 1993, but the baby dragon started showing up less and less, only showing up one last time for a Sunday comic extravaganza to make up for all the other times she didn't appear.