Recently, there's been more and more references to comparing the current Presidential Administration to the Caine Mutiny, where an increasingly unbalanced and paranoid Captain Queeg's position of command is taken over against his will.  Gee, I wonder why? 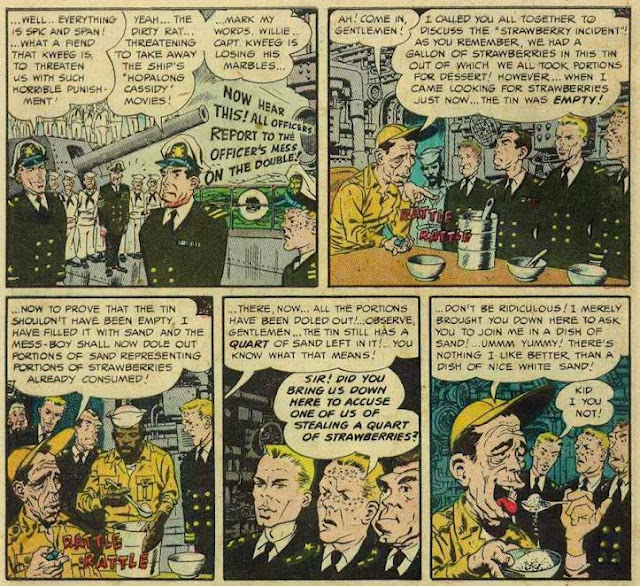 While rewatching the movie, there were several factors that jumped out at me that went unnoticed at first.  It occurred to me that there were several things that would be completely different if it were made today.  There's going to be minor spoilers for a 60+ year-old movie, the general audience primary point of knowledge would be the MAD satire (back when it was first in colour, and issue number was in the double digits), who many would vastly prefer over the source material.

First off, the main major complaint that I'm sure many people would have is that the Romantic subplot is totally superfluous, distracting, and could be cut out entirely without missing anything of substance.  I'm sure there are people who've internally memorized the whole crew present during the "Strawberry Incident", but for the life of them, can't recall the Girlfriend's name.

The movie starts out with a clean-cut boy of high standing graduating from University who has great expectations and high ambitions, and is slightly embarrassed to be dating a girl who's a dancer.  Upon being drafted into the Navy, he suddenly finds himself onboard a naval M*A*S*H boat of sloppy organization and slipshod crewmanship, well below his expected standards. 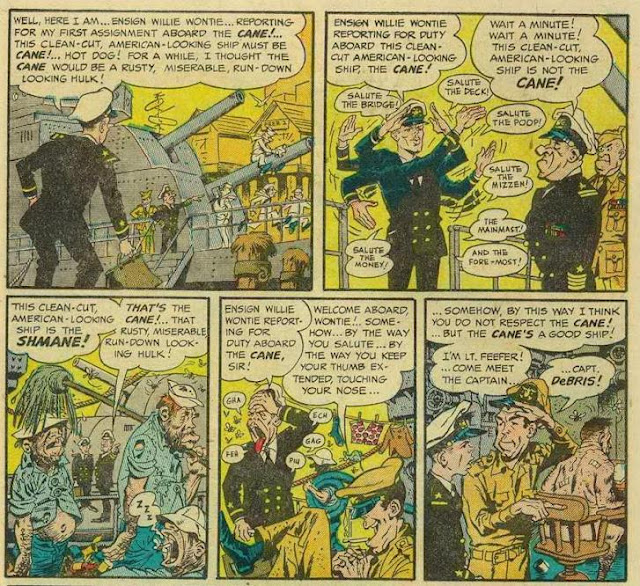 Dismayed at the conditions of the minesweeper going through the motions, and annoyed at being punished despite trying his best compared to the lackluster behavior of the crew.  Willie is secretly delighted when he finds out the current Captain is going to be replaced with someone with more experience - someone who'll make the ship shipshape.  That is, until Captain Queeg starts exhibiting irrational behavior ranging from being easily distracted by miniscule details (focusing on a soldier's shirt tails over the circular route of a ship cutting their towline), overly controlling, punishing the crew for minor infractions, and ordering a stripdown over a key he already knows doesn't exist.

While Queeg's actions seem excessive, they're waived by his impressive history of past naval knowledge and experience... which is completely glossed over.  You'd have to read the book to know that, but none of that knowledge comes across onscreen.

So naturally, from the displays of cowardice, irrationality and general failure of winning over the hearts of the crewmen who've had it far too easy with their previous Captain, Queeg fails to inspire loyalty.  There are whispers of Queeg being mentally imbalanced, paranoid, and playing with Freudian steel balls.  And his actions don't help much when he freezes up when the fragile ship is assaulted during a typhoon, save for remaining insistent on staying on course, which could potentially put the whole ship in jeopardy.  So then the first mate decides to mutiny there and then.

And then the focus shifts away from Willie to Maryk, leaving the main active character into being an impartial passive observer.  Not very many movies would take that route.

If the Caine Mutiny were being remade today, Humphrey Bogart would still be dead.  But more than that, the primary identifiable character wouldn't be the straight-laced Willie, it would be Maryk.  After all, he's admittedly "not that smart", and was easily manipulated by Keefer to record Queeg's increasingly irrational behavior.  It's Maryk who's the one on trial for insubordination, not Willie.

For the longest time, I was confused because Maryk wasn't anywhere close to sounding like Van Johnson.  That was until I realized that he was named after the Actor, and not the character.  Much like how Jack, the Nameless Protagonist in Fight Club (I am Jack's utter lack of surprise), was re-Christened Edward Norton in some captioned versions of the cult movie.

As far as I can tell, Willie's main function is to show his transition from breaking away from his domineering parents.  (His father was the one who pulled strings in the background so he'd have a 'respectable' Captain)  And early on, when he was serving under Captain DeVries, he continually made mistakes that got him reprimanded, because he was undermined by men who didn't respect him. At the very end, he was asked what it'd be like to work for a crew that was constantly under-appreciating and undermining his work ethics.  He admitted that anybody under those conditions would be subject to great strain, clearly speaking from experience.

But those details are lost in a sea of irrelevant details.  The audience is expected to recall that scene of seemingly insignificance where Willie complained to Captain DeVries that would be washed away in comparison to the more memorable Captain Queeg moments.  The problem is, in between those scenes are the Romance subplots that as I mentioned before, distract from the issue, don't really go anywhere, and create artificial drama.  If the remake concentrated solely from the viewpoint of Maryk, it would be a vastly marked improvement, alongside the likes of A Few Good Men.

Hollywood Filmmakers nowadays generally pander to a lower common denominator, and Maryk would certainly fit the bill.  He's well-meaning, but gullible to armchair psychiatry, and doesn't find out just exactly how he's been fooled after the fact.  And there's the heightened factor of personal risk, when the audience is invested in someone from the start.  These traits would be a strong convincing argument for why Maryk should be the central character.

Losing Willie's personal opinion wouldn't be much of a loss in this trade-off.
Posted by DeBT at 8:02 PM