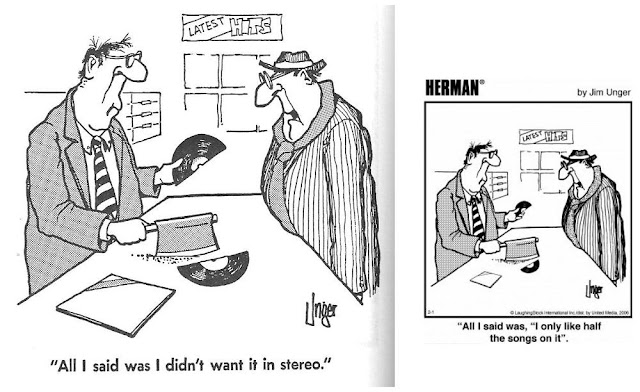 Pretty much every advancement of new technology has faced the future with the prospect that "This newfangled device will threaten our way of life!", the alarmist message not being too far off the mark.  Since it would change things - whether for the better or for the worse being constantly under debate.

What surprised me was that despite my distaste, there were apparently far less instances of modern technology in the newer Herman Sundays than I thought.

It's not so much the implementation of newer technology that bothered me.  There were many strips where Herman showed remarkable ingenuity about technology.  It's that the newer strips fail to show the absurdity of technological advances. 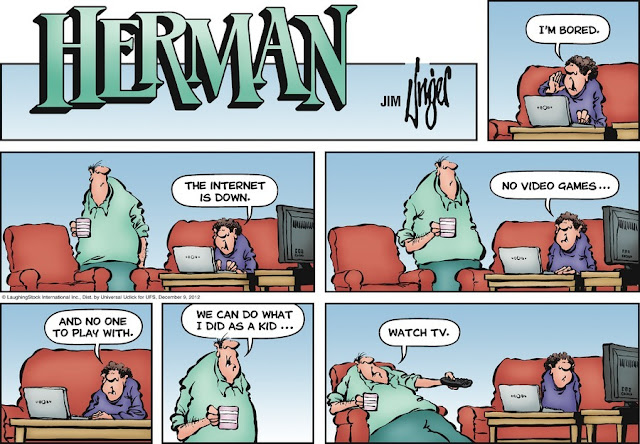 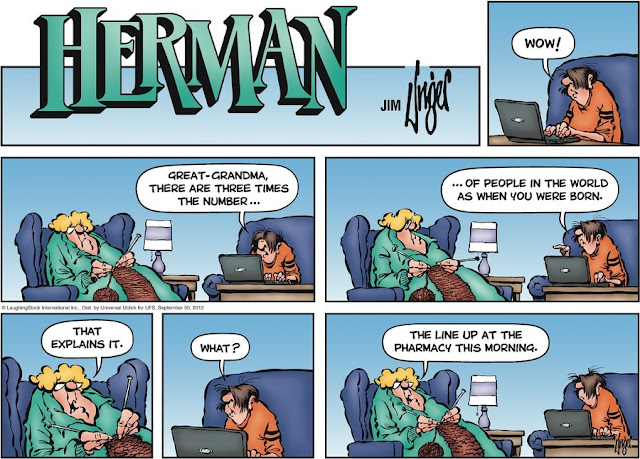 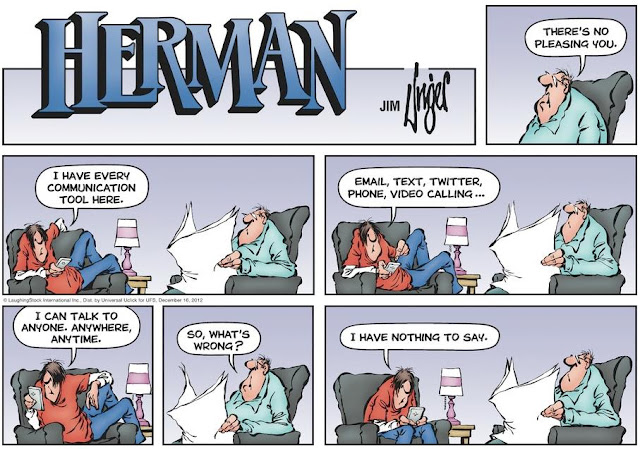 Not to mention that many Herman strips had box-like TVs, so seeing Flat Screen TVs in Herman is something of an anachronism.  I've grown so used to seeing old-timey wimey technology there that seeing Herman join the 21st Century without a spacesuit is considered unusual. 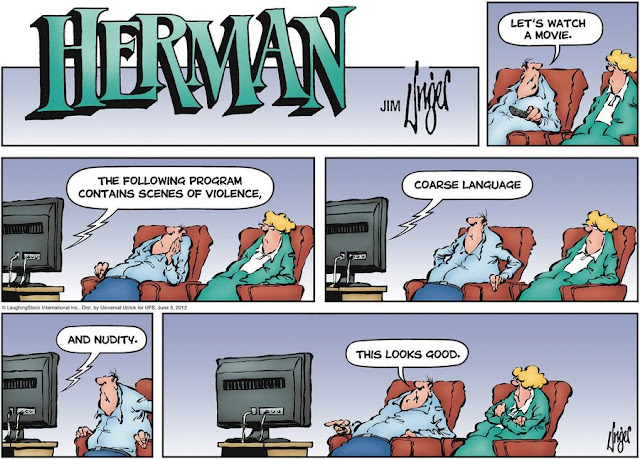 When Jim Unger retired (and later died) there was the unspoken guarantee that ghost artists would pick up the slack, creating new comics in his absence.  But so far, they've been content to stick with rerunning his old stuff, which is fine, because the new material hasn't exactly been up to snuff.  Here's a few examples.

The last panel of Herman tend to be spoken by one person only, lending further impact to the punchline depending on the size of the panel.  The Turnkey's comment here is pretty much redundant.  You could remove it, and the outcome would be just the same.

On the opposite end, this strip suffers from the opposite problem.  There's a kind of meanness in the newer strips that wasn't evident.  Sure, there were the occasional barb thrown about, and a henpecked husband, but in terms of relationships, it was more The Better Half than The Lockhorns.  What exactly is supposed to be funny about the above strip?  Or the one below?

Now, compare these with this one: 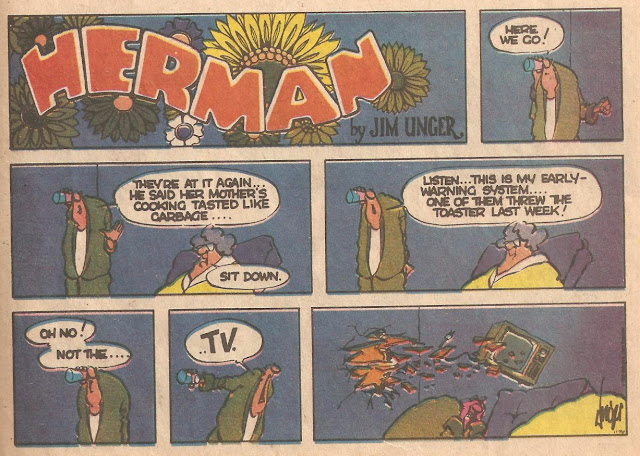 Another great
of Herman is that it packages so much material with very little.  With just a few spoken words, you get the full breadth of a story that we're seeing a bit part of.  We know that the couple next door has gotten into tense arguments that are audible to their neighbors.  We get the gist of what they tend to argue about.  We know the Husband is nosy only as a precaution.  We see the Wife clearly doesn't want him to indulge in this foolish behavior, even as she benefits from it.  All this and more can be gleamed from the absurdity of the scene.  And Jim Unger did this on a regular basis for almost twenty years!

The only daily I saw that was done by the new artist was one that was a redraw of an older strip. 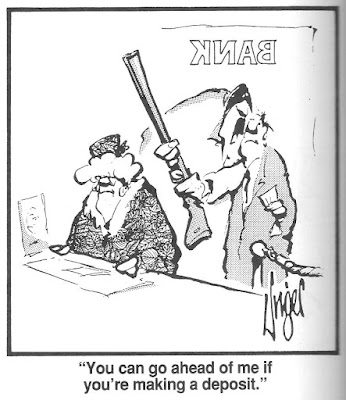 The great appeal of Herman was that it showed naturalistic dialogue that could be spoken by just about anybody.  That kind of honesty is hard to come across when being mass produced by someone else who hasn't had the experience of several years of deadpan humour. 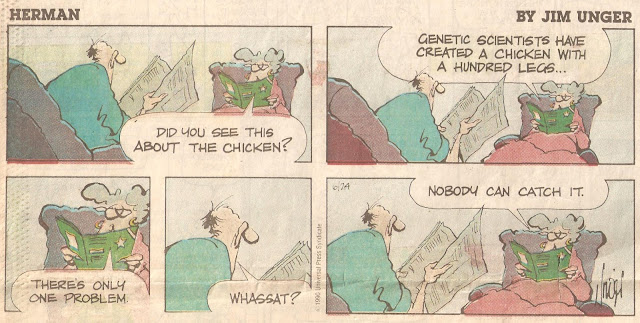 As a result of the strip changing hands, it approached sitcom territory not unlike how the first Seven Seasons of The Simpsons were demythologized by later Seasons that bypassed thought-provoking multidimensional layered jokes with emotional depth by forgoing multiple needed rewrites and instead going for the cheap laugh. 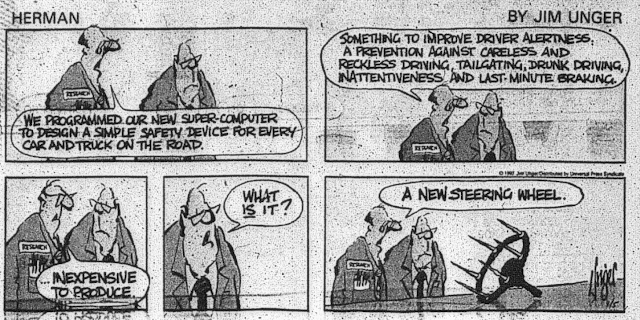 The two comics below probably comes the closest to approaching the spirit of Herman, while also remaining far away from the influence.  It's unusual for a Herman to have so many incremental punchlines in a row.  Another thing about these newer Hermans - there's a lot more dynamic movement and use of arms when old comics tended to be more static, but I still feel something is lost in the transition. 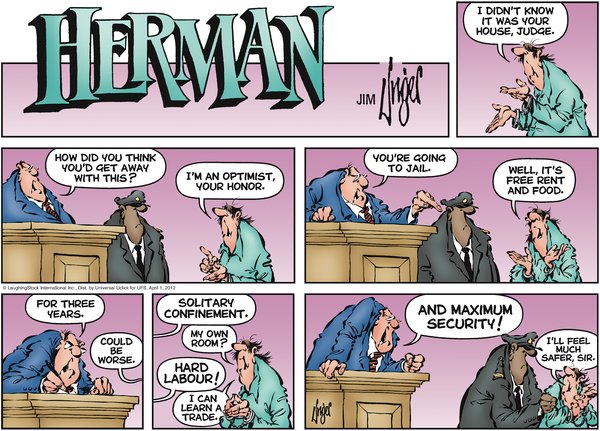 After a sporadic schedule of newer material, the last "new" Herman comic I bothered to check was on October 6th, 2013, and it's not as memorable as you'd hope it'd be. 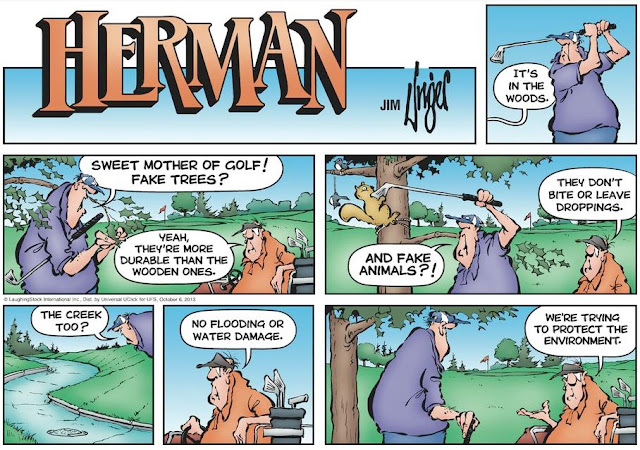 After that nonsensical one, they went back into reruns before resuming in December.  There were always the occasional baffling Herman comic, but even those gave you the opportunity to think about them.  What point is exactly being made here?

It just goes to show that despite being an architect of another time (Box TVs everywhere), Herman was surprisingly progressive in ways you wouldn't think.  Talking about Genetic Manipulation, Recycling, Computer Design of Products, Miniturization, and a lot more! 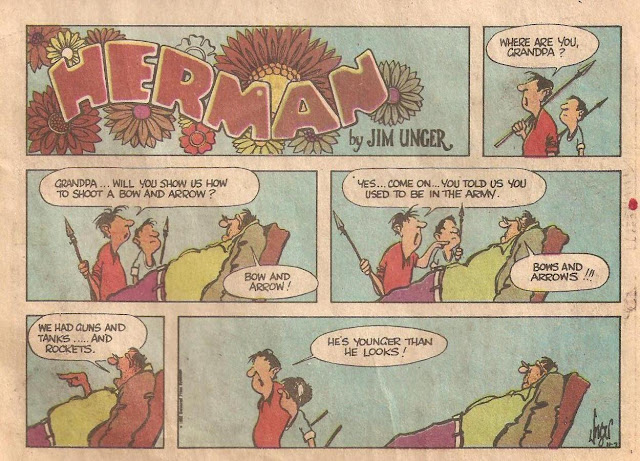 Normally, I wouldn't bother with devoting much attention to Nancy, a comic I consider so bland that it barely musters attention.  I can't even find it in the online Newspaper archives, and there's a LOT of lame strips out there.  But the latest revision of Nancy has shown a surprising amount of humour that while still sub-par, is decidedly better than the previous iteration.  It's still bad, but in a kind-of-amusing-bad way, not so-bad-it's-ironically-good.

Compared to the previous run, of which I only saw a smattering of, this slightly snarkier version is a vast improvement, but then, considering the source material, that's not a very high bar to clear.

If anything, I suspect what a lot of people are really protesting isn't that Olivia Jaimes, the only woman working on a Legacy strip starring a female character since ever, but that former Nancy artist Guy Gilcrest's bombshell Aunt Fritzi isn't around anymore. 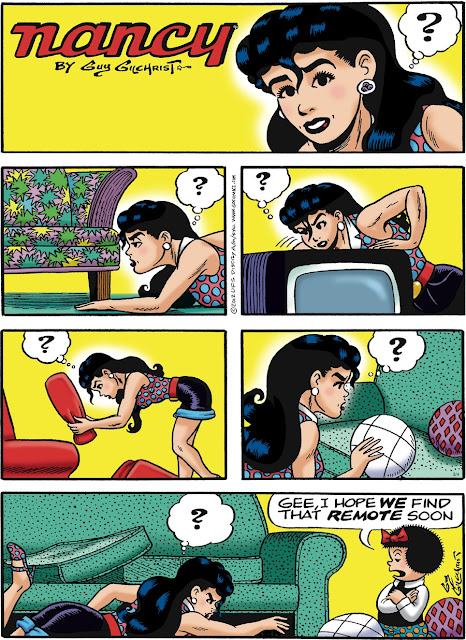 Frankly, a lot of their comments seem self-determined to show just how badly the new Nancy artist is living up to the legacy, but I suspect those complaints are railing against change that they're not accustomed to.  Another annoyance factor is that Nancy seems to be relying more on recent technology than her previous iteration ever did.  Using Ipods and computers just like everyone else!  What would the World think?

Though there was a Gilcrest comic where Fritzi used a cell phone, and no one complained there.  Funny, that.
Another new addition is that Nancy now seems to be allergic to pollen.  This is probably the largest defining characteristic for what's pretty much a blank state.  I don't think she's ever had this trait before, and can't be bothered to do a search beyond "flowers" and "pollen", though what little I saw didn't yield very much.  (Check out the very first comic in this post)

Probably the best addition (so far) is the inclusion of a nameless teacher who clearly takes no guff with the known boundaries of the Nancy Universe.

In the midst of schooling Nancy, we get to see our first rendition of Jaimes' Aunt Fritzi, and it's a much more reserved version compared to her earlier incarnation.

If anything, going through the Nancy comics and learning about the Nancy Card Game method certainly showed how they influenced the Randomized Garfields that'd been floating around.  Considering the sheer amount of odd occurrences in a dadaist Nancy strip, any configuration could wind up creating a comic that kind-of-but-almost-sort-of makes sense.  To all those haters hating the latest new Improved Nancy, I present to you a relevant page from Cracked Magazine:

Lately, I’ve become obsessed with two entertaining forms of Media that I’d long since avoided due to the hype they’d been given, Undertale and Steven Universe.  Two very different but thematically similar entertainment with tremendous crossover appeal.  And I'd been using my spare time going through the rabbit hole of fanart and fancomics, saving whatever I could find later.  Not to mention the numerous analytical essays on the show.  Which is about a Magical Boy being raised by older Space Rocks in the form of Anthropomorphic Women.
I'd been watching Adventure Time, and was pleasantly surprised at how much I enjoyed the show despite its seemingly childishness and Videogame logic, finding the writing to be on par with early Simpsons episodes.  Which shouldn't have been that surprising, since the writers grew up on those, and pretty much threw everything they were influenced by into their work.
One of the producers for Adventure Time, Rebecca Sugar, created Steven Universe as a show for her brother, and it's developed a particularly rabid following.  The first time I heard of it, I didn't think much of it, being little more than a Magical Boy show with overt Anime overtones and references.
I’d been annoyed at other American attempts to emulate Anime without understanding the inherent appeal behind the traits they were exploiting. (Hello, Teen Titans)  At the time, it was easy to ignore, since I didn't get the channel it aired on, but once Teletoon started airing reruns, I decided to give it a shot, and was quickly hooked.  Steven can be admittedly annoying with his "Please!  Don't fight!" outlook, but his positive outlook gradually wins you over. 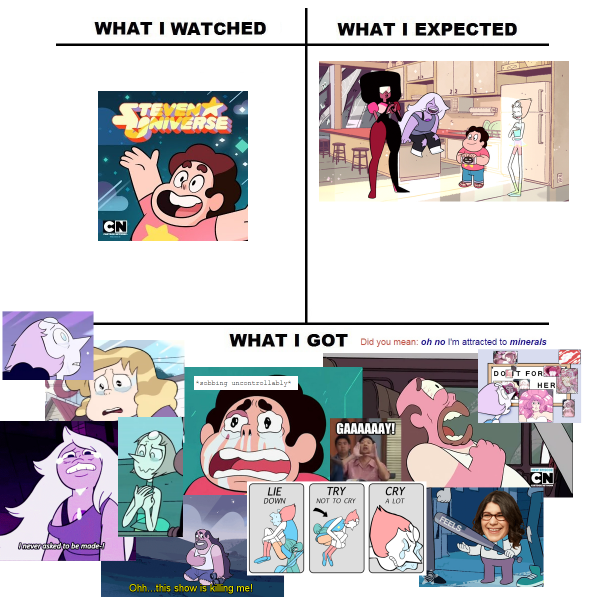 Much like Adventure Time, Steven Universe is pretty much a love letter to Anime, and clearly done by people who’ve played Video Games and aren’t just aping the superficial surface appeal that make them popular.  The show wavers between down-to-Earth stories, and intense internal conflicts.  The early episodes take some time to get used to knowing the characters, but once it hits the halfway point (Mirror Gem/Ocean Gem) of the 1st season, it lays the foundation for what'll happen next.
Each episode is only 11 minutes in length each (save for a few half-hour specials), so marathonning through these isn't as much as a hurdle as you'd think.  The cliffhanger for the 4th Season was so great I broke down and watched the beginning of the 5th Season just to see what'd happen next.  Online downloadable subtitles made this much easier for me to understand what was going on.  But I couldn't make them appear in conjunction with the action on the screen - I just dragged the SRT file into a different window, and scrolled down when the time was right.
If there's a fault with the show, it's that the release schedule for newer episodes is so erratic and arbitrary that hiatus and wait time between only builds greater anticipation onto what's coming next.  Which is hampered by an extensive use of down-to-Earth episodes that are stand-alone, but symbolically meaningful, and sidestepping the overall ongoing plot.  It's a slow burn that requires analysis and probing clues and trying to find meaning wherever they exist.  Having gotten into the show around the 4th Season when there was already a backlog available, I can imagine how frustrating it must've been to wait for the next installment.  Waiting for the latest subtitles to become available was a torturous time between everyone else getting a leg up and wanting to catch up. 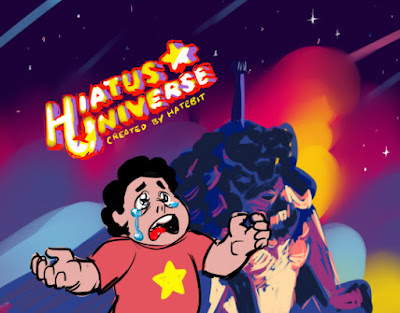 In fact, one of my previous blog posts was created as a response to the show.  Especially upon the worry that the 5th Season might be the last Season.  (So far, the 6th Season is all but verified at this point, despite it not being confirmed yet)
So, with the release of the latest subtitles for the big reveal that must’ve been bugging the Universe Crew with the commercial trailers spoiling everything beforehand, I figured now would be the proper time to showcase a radical theory that I’m surprised hasn’t been proposed before.

Spoilers for early 5th Season episodes after the cut.