It's been awhile since my last update, but I managed to add some more chapters to my current alternate project, This is THEY.  The link I gave for the 1st chapter was somewhat bugged, so here's the correct address: 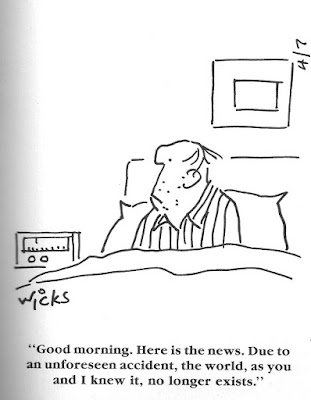 Some of the references and influences may seem obvious to devoted readers of Newspaper Comics and Cult Movies, but there's a few lines I stole - sorry, plagiarized - I mean, borrowed to bolster my story.  The best way to ensure that your inspirations aren't easily traced is to use sources that are likely to be forgotten ages ago.  And here I am showing my secrets to everyone.

The current arc, Sweet Sick Teen, (and yes, all planned future titles are intended puns) devotes attention on a surprise pregnancy on a teenager known only as "The Girl", whose appearance is left deliberately vague.  Her sudden condition has an unintended side effect of emanating an unbearable fishy smell, which she can't stand, but neither can anybody else.  One classmate even remarks, “Did somebody hide garlic squid with mango and banana in the ceiling again?”, which is a nod-out to Gordon Korman's The Twinkie Squad.

Later, when the Girl is forced to go to the Doctor for a diagnosis, this exchange occurs:

“You can’t leave just yet.  Not until the Doctor’s gotten a good look at you.”
“But you’ve already done all the prodding and testing and whatnot.”
“It’s bad form to leave without a second opinion.”
“Meaning... that there’s a fair chance that I MIGHT not be pregnant?”, she said with a smidgen of hope.
“Oh, you’re preggers for sure, no doubt about that.  Just wait a few minutes.  The Doctor should be along shortly.”

She’d barely had time to cross her arms and roll her eyes at the unresponsive blank screen before the Clinic door opened.  A man wearing a surgical mask came in out of breath, either from running, or from the Girl’s scent.  He drew closer at the Girl, took a furtive look, poked her stomach with a solitary finger, then through a strangled voice, said, “Yeah, she’s pregnant alright.”  Then ran out the door with nary another word.

Later, the Girl finds out to her displeasure that she can't simply abort the baby without running into potential trouble.  It's not so much the forced pregnancy that bugs her, but having to live with the smell.  So she decides to take care of it by going someplace that'll definitely take care of this little problem - the fabled City of Lies, where untruths spoken often enough become true.

Fun fact - the three obstacles set up before the Girl's entrance into the City of Lies weren't included in my first draft.  The first obstacle, the Gravity Wells was originally intended to be used to show her way to school, but I felt that would wind up slowing the opening down too much, and didn't want to waste it, so I relocated it elsewhere.  The 2nd obstacle - Memory Bane, is a combination of all the short-term memory losses into one.  Along the way, she encounters a Tattooed Man with elaborate designs that's a cross between Memento and Prison Break.  An early encounter with getting a crowd of curious followers to stop following her brings the following dialogue:

“Crowd can look intimidating at first, but they’re remarkably easy to control.  They all want someone to tell them what to do.”  Then he spoke up in a booming voice.  “Alright, listen up!  Put your right finger in your right ear!”
“NOW WHAT??” the crowd roared back in unison.
“Put your left finger in your left ear!”
“NOW WHAT??”
“Stand on one leg!”
“WHAT??”  The crowd asked.  “WHAT?  WHAT??”
“There, that’ll hold them for awhile.”
“Aw, I wanted to have a crowd do my bidding.”
“You wouldn’t have been able to handle it.”
“What, you don’t think I’m capable?  I’m sure I could do it.”
“I’ve seen it happen before - overconfident leaders who think they can rule a crowd, only to have the crowd overwhelm their ability to control it.”
“And what makes you think I wasn’t good enough??”
“If you truly were worthy, you wouldn’t have lost your train of thought in the first place.”

She had nothing to say to that.  The only retort she could think up was, “I blame you.” 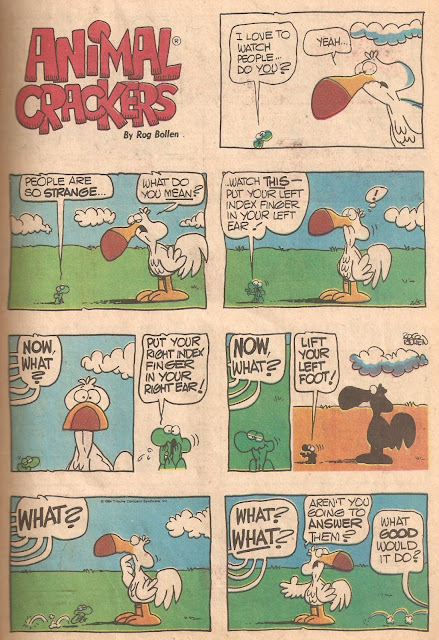 If nothing else, I can hardly be faulted for wanting to use universal truths.

While in the midst of Memory Bane, people can only recall at least three pieces of information at a time.  While the obvious influence would be Memento, the major source of inspiration was the 6th storyline of  Jojo's Bizarre Adventure, Stone Ocean, Jail House Lock!  Which, in turn, was inspired by Memento.  Go figure. 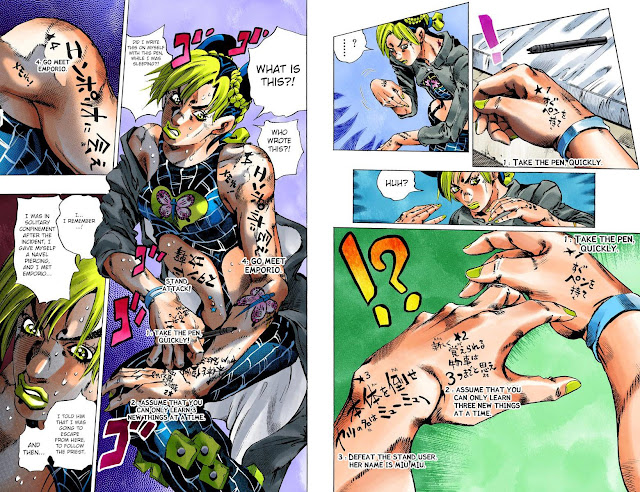 What I intend to do with my story is to influence new ways of thinking.  (There are very few narratives that are voiced in the Second Person)  And the best way to do so is by telling a story, and letting audiences figure it out themselves.  While in Memory Bane, there are little details that upon a second reading, make more sense.  I tried my best to sprinkle copious amounts of clues throughout, but worried that in my haste to clarify things, I might've dumbed down the material, or put off the reveal for too long.  (No, I'm not going to tell you what it is, read for yourself) 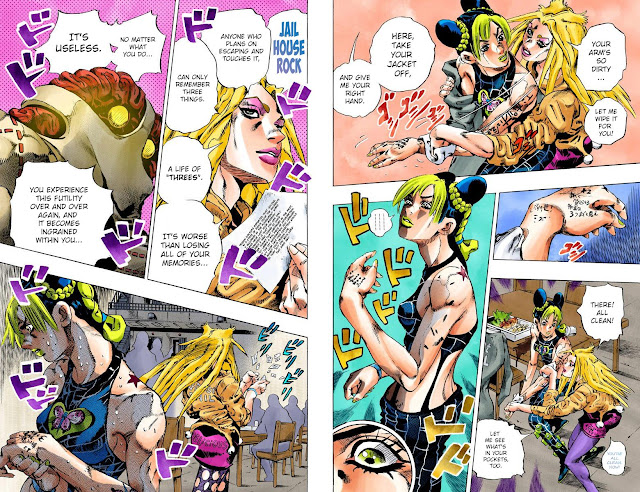