Okay, this is going to take some explaining.  In Newspapers, it's not unusual to have a section for younger readers that's made up of their contributions and leaden with illustrated commentary.  There was a feature in the Montreal Gazette first as Tiddlywinks' The Bird Bag, and later a Sunday feature called The Fridge Door. 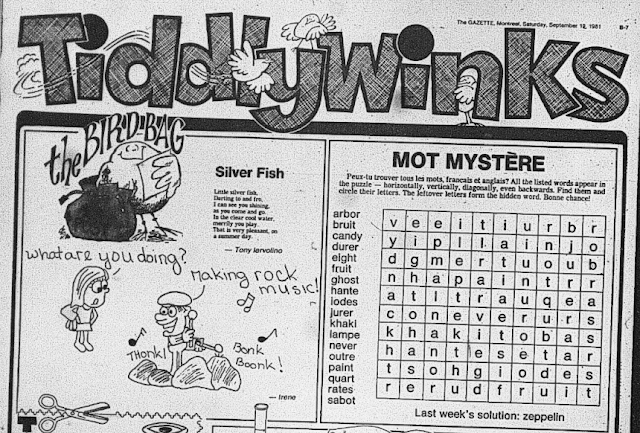 That later feature would be drawn by Paul Gamboli, an infrequent artist who drew a few select articles for Josh Freed, the Canadian equivalent to Dave Barry.  The following articles were reprinted in his book Sign Language. 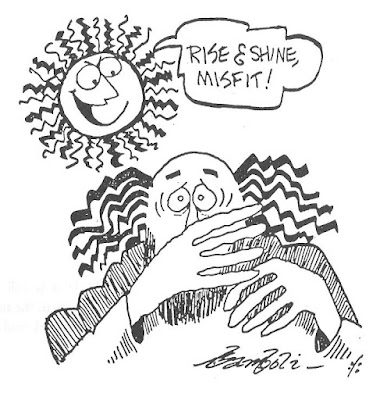 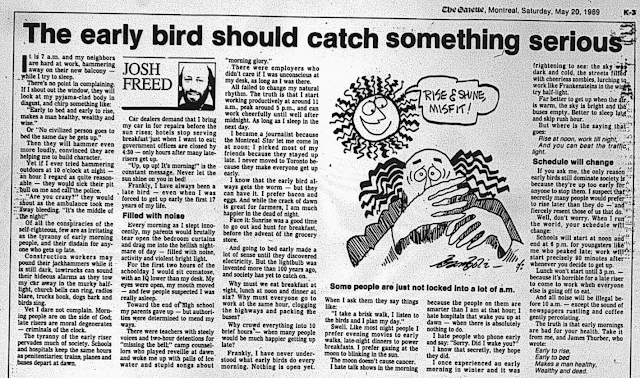 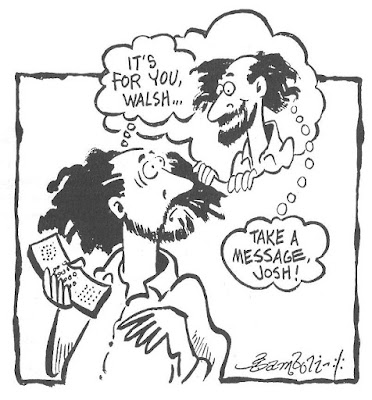 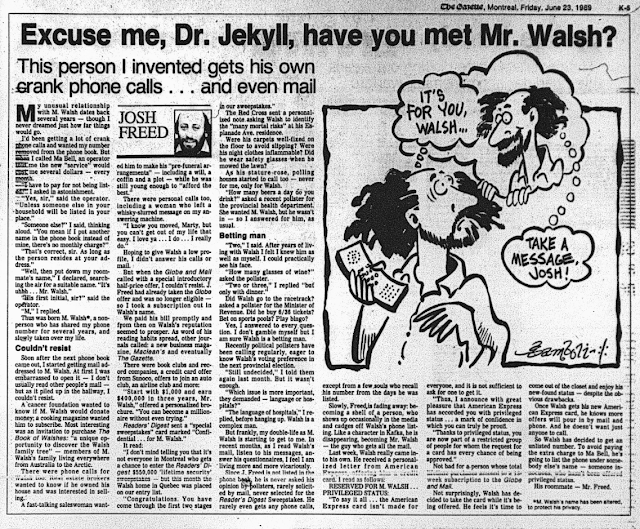 The Fridge Door started out perfectly normal, with a Raccoon named Noodles who had a fondness for noodles.  Then it gradually got weirder with the introduction of a worm from space named Eugene... 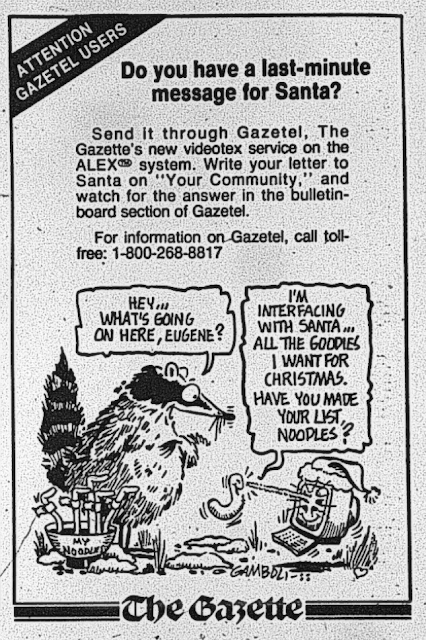 ...but I'm getting ahead of myself.

Gamboli's character ran from April 24, 1988 to December 1989, which started out normal, but ran the gamut of weirdness when the feature took a decidedly dark turn, when Eugene the Alien worm got shot in a hunting expedition, and his fate was left ambiguous as Noodles was hibernating in a nearby cave.  Now, this was around the time that the Polytechnique Massacre happened, culminating in the deaths of 14 women and stricter gun laws in Canada.  So any attempt to reverse that would've been seen as cheap.

After that, Gamboli's feature decided to tap into the innovative potential of having his childish audience decide what would happen next.  Here's the backstory for what happened during the last month of The Fridge Door, but it's practically irrelevant here, since it's hardly addressed. 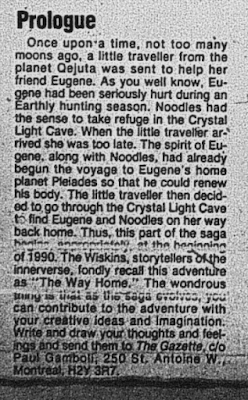 Instead, we focus on a piece of fuzz that's just wandering around. 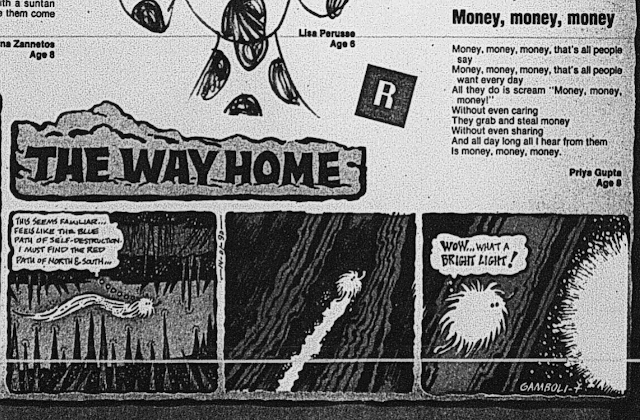 The very next week, they recapped the backstory again for those who might've missed the memo last time.  And once more next week. 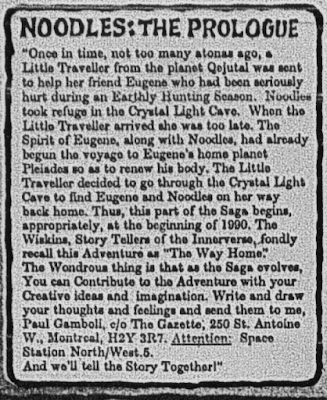 It really is a shame these scans are only available in black & white, since as I recall, there were some psychedelic colours involved. 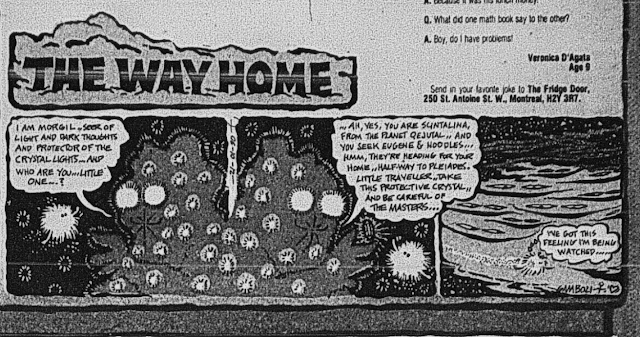 After three weeks of non-sequitur events, readers were beginning to wonder what happened to their favorite Raccoon. 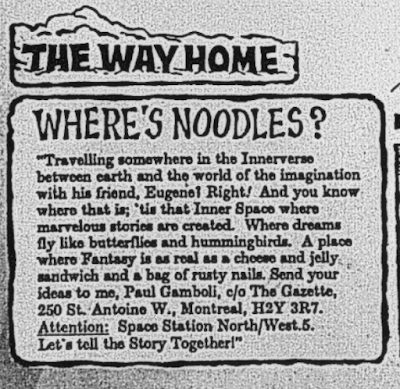 Feeling the need to address their concerns, Gamboli obliged, giving a kind of answer, by having Eugene take the form of a translucent moth, and the two of them traversing a weightless world of Pleiades known as Wasteland, which was around the time Bloom County was revamped into Outland.

Any similarities between licensed characters is deliberate and intentional.
Apparently, Gamboli couldn't decide whether Nopuss should have braids or half-eaten Mickey Mouse ears.  The text on the upper half of the lower scan is barely legible, so here's a helpful script to guide you along some of the more incomprehensible passages. (Italics between *Asterisks* are guessimated quotations)


Panel 1: Oh Nopuss, he's so cute.  Let's invite him to tea!
Panel 2: Hmm.  A stranger wearing a black mask.  Too much hair to be the Lone Ranger!
Panel 3: *Nopuss* oh boy! Never look a gift visitor in the mouth!
So, how ya doing, fatso?
(There's nothing in this cup!  What's with the fatso stuff?)
Panel 4: Of course - *our guest* is right, there's no tea, it's just pretend!
Panel 5: --PRETEND!!? Shocked I am!  Who's the perpetrator of this sham?
[Empty cup]
Panel 6: Well, Nopuss, there's no water in Wasteland, there's nothing her to *nourish* the body, let alone *feed a* soul!
[Empty tea pot] 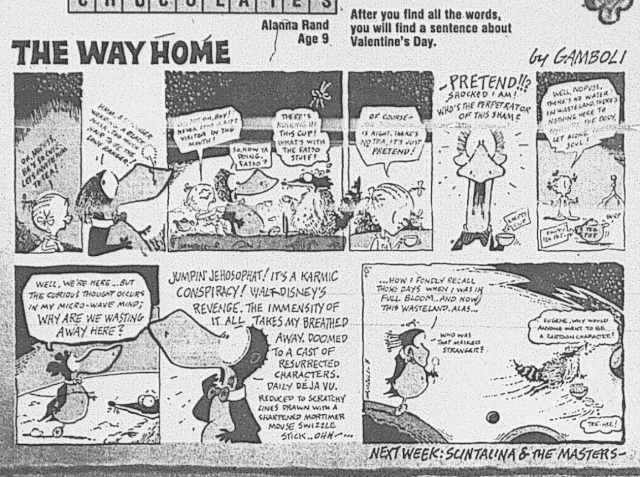 The rest of the page is relatively legible if nonsensical, but the Raccoon's thoughts as they're flying away are:


(Eugene, why would anyone want to be a cartoon character?)
[Tee hee!]

After that amusing copyright infringement cameo, we get some more adventures for those who were curious about what happened to Scintalina, the ball of fluff.  In other words, no one.

After enough sideways distractions, we finally get back to the main attraction, Noodles the Raccoon who's clearly besides himself.

Sadly, we never got to see any more, for the very next week, which occurred on April 1st, the section that normally would've contained The Way Home was replaced with an advertisement for Drug use. Certainly a cruel joke.  After that, there was no more, which was just as well.  Depending on an outside children's audience to dictate your plot is no guarantee for narrative consistency.

I'll be gradually introducing these Sunday features at the beginning of every month, so we can see just how a relatively harmless children's feature wound up this way.
Posted by DeBT at 7:42 PM