Things haven't exactly been easy for my family recently.  For starters, my sister, her husband AND her baby have all fallen sick.  On top of which, OUR parents have just come down with whatever bug's been going around lately.  The only one who's remained unscathed from all this virus file-sharing is yours truly, possibly because I'm not as sociable as they are, spreading their germs everywhere and whatnot.

So when the time came that they were looking for a little downtime, fostering the runt of the singular litter off on my parents in the hopes of getting some well-deserved down time, it naturally reminded me of a comic. 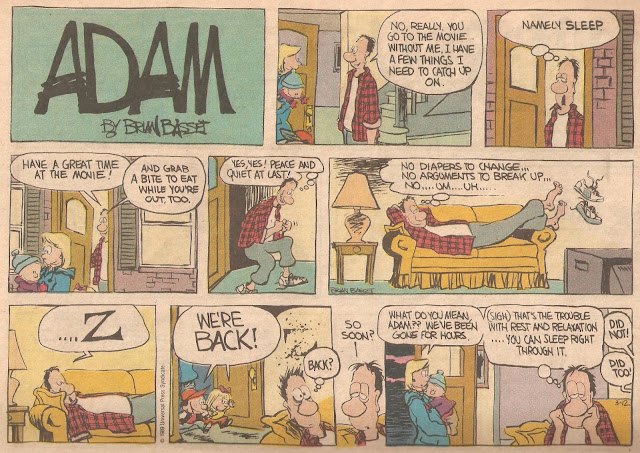 But that was just a quick and easy response in place of a longer narrative.  There was a storyline where Adam had the option of taking a vacation, and opted not to take it if it meant taking the kids along with him, since the definition of a vacation is to get away from whatever's stressing you, and you don't want to be carrying along extra baggage along the way.

Of the strips that were included in the book collection, more than half were left out.  On the one hand, the book collections were a good way to refresh the reader's memories, but people who weren't around when they were first published would have no frame of reference for some of the things that happened or why.  This arc which started in late May wouldn't resume again until mid-July when further Vacation plans were further fleshed out for both parties.

Someday, I should really post that miniarc about the Cigar Card Game.

And then, the day finally comes...

As any long-time reader probably figured out by now, something would've happen to upend Adam's carefully-laid sloppy plans.  A constant reoccurring theme in Adam comics is that Adam is somewhat of a perpetual loser.  Even though he's rather lazy, it's hard not to feel sorry for the guy.

There were a few more epilogue strips detailing the family's reaction to returning from their vacation, but none of them are as perfect as this note to end on.
Posted by DeBT at 2:00 PM