Recently, there was an expose of Hillary Clinton's book, What Happened, of her Campaign Trail that's been getting mixed reviews, from people who admire her, and people who loath her, usually for the same reasons.  Even though the majority of the book deals with her personal experience, the most vocal critics mainly focus on a brief paragraph that singles out Bernie Sander's reluctance to tone down his rampant sabotaging attacks on Clinton, long after he was no longer in the running that included a timely Facebook metaphor:


Bernie: “I think America should get a pony.”
Hillary: “How will you pay for the pony? Where will the pony come from? How will you get Congress to agree to the pony?”
Bernie: “Hillary thinks America doesn’t deserve a pony.”
Bernie Supporters: “Hillary hates ponies!”
Hillary: “Actually, I love ponies.”
Bernie Supporters: “She changed her position on ponies! #WhichHillary#WitchHillary”
Headline: Hillary Refuses To Give Every American a Pony.
Debate Moderator: “Hillary, how do you feel when people say you lie about ponies?”

Another complaint I heard elsewhere (but can't seem to find again) was that Hillary would offer to concede to Bernie's plans, and even offered to integrate his ideas onto hers, but Bernie would undercut her attempts.  If a Health Care Plan required the citizens paying 4% of taxes, he would up the ante by saying, "We can do it for 0%!"  And then, Hillary would be demonized for asking for being the Fun Police in asking how this plan could work.  Bernie may mean well, but he has yet to offer a reasonable way of having it pay for itself.

If this seems somewhat reductionist, it's because this is just a roundabout way of saying it reminded me of a relevant passage from Jaka's Story.

Most of Cerebus (particularly the early parts) can be somewhat of a slog, with pages of overdone prose and in-joke references to American comics events that were taking place around the 80's and 90's when it was published.  Here's a sample from an early issue, where the narration is still in its infancy: 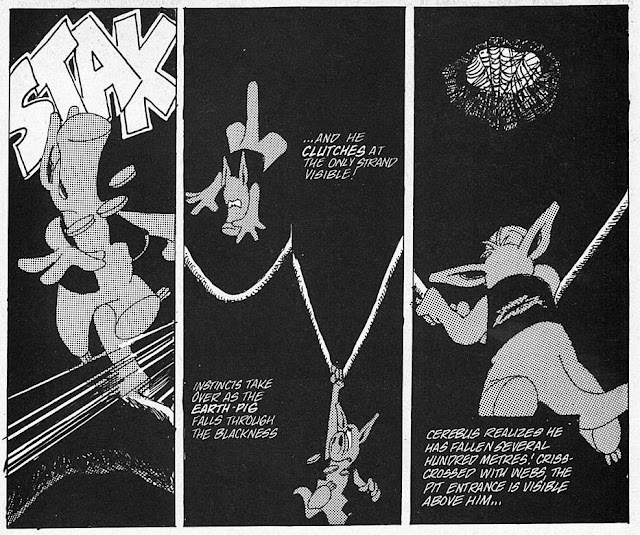 It's only after you scroll down that you notice that there's some needless text at the very bottom of the page, which somewhat ruins the whole effect of reading the panel.  I always thought it would be greatly improved if the text was moved higher up, which not only would put it next to the big sound effect, but also have the text flow much more smoothly in conjunction with the action.  Of course, Dave Sim was still learning his craft, and intended to keep all aspects of his improvements intact, warts & all, but I can't help but think a slight modification would help in this instance, even for the Restoration Project. 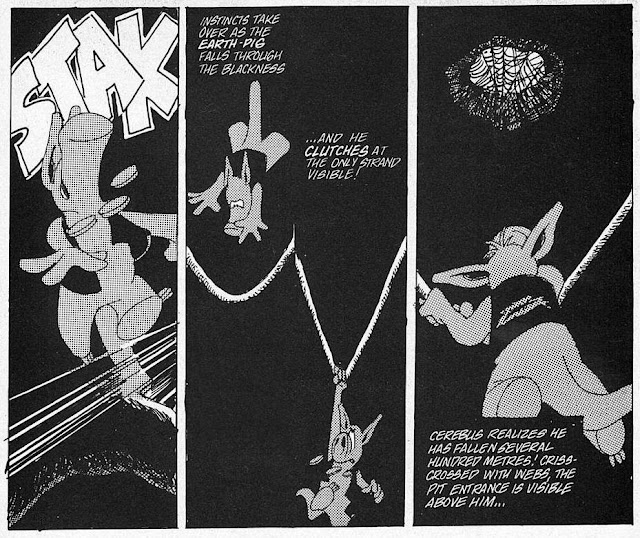 Equally annoying is that very often, plans will be discussed in great detail... only to be completely overturned due to a previously unforeseen event, rendering most of the previous conversations practically redundant.  You could skip a large portion of these pages, and still wind up in the same place.  It's very like the Yotsuba Arc of Death Note where L would explain a plan to avoid being detected, and then stupid Matsuda would wind up ruining all of his carefully laid schemes. 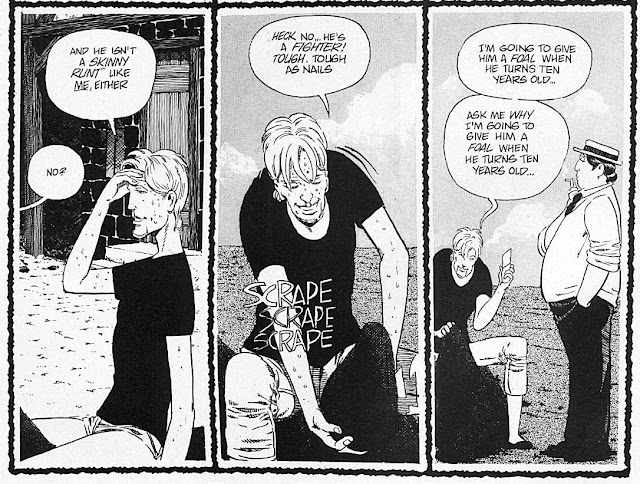 Most fans recommend skipping over to the 2nd volume, High Society, but even that has its faults, since several reoccurring characters make a reappearance, and the climax loses its punch if you're not aware of a certain story that took place in the 1st volume. 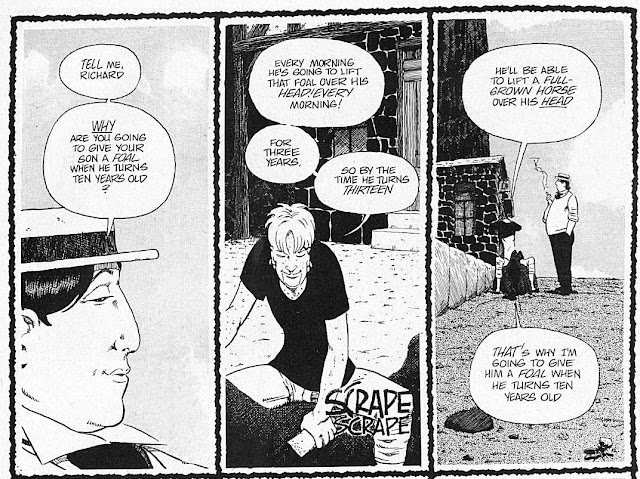 But Jaka's Story is Cerebus at its most accessible.  All that's really needed to know are three things: 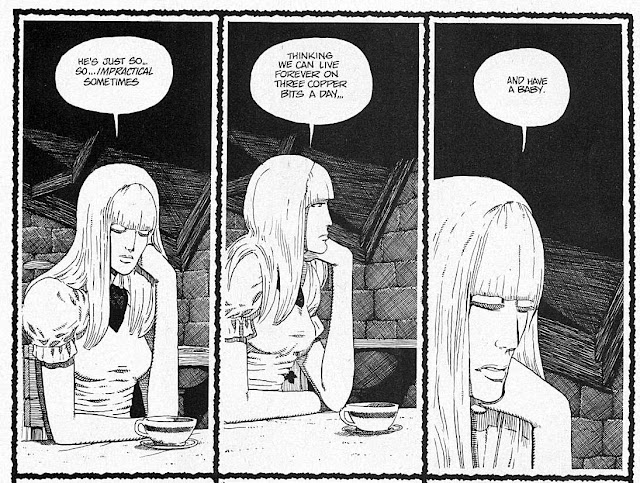 That's it.  That's all you really need to know.  The rest of the story plays out naturally without the need for extra unnecessary exposition.  And the consistent 6-grid paneling is broken with the occasional dense typewritten text both for the Oscar Wilde expy and internal scripted dialogue of storekeeper Pud. 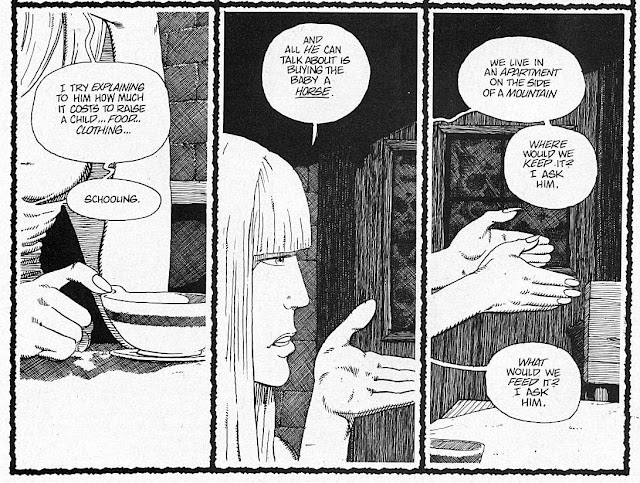 Reading Cerebus - even as a first attempt isn't always an easy thing.  You can't just blindly rush into a single book and expect to knock it out in a single weekend.  (Well, you can, but you'll get a headache doing so)  Like the Krazy Kat strips, they need to be absorbed at a slower pace, to truly understand what's going on.  Or, you could just flip through the issues, reading the pictures, and the occasional spoken word where appropriate, before moving on to the next in a mad dash to get to the better stuff. 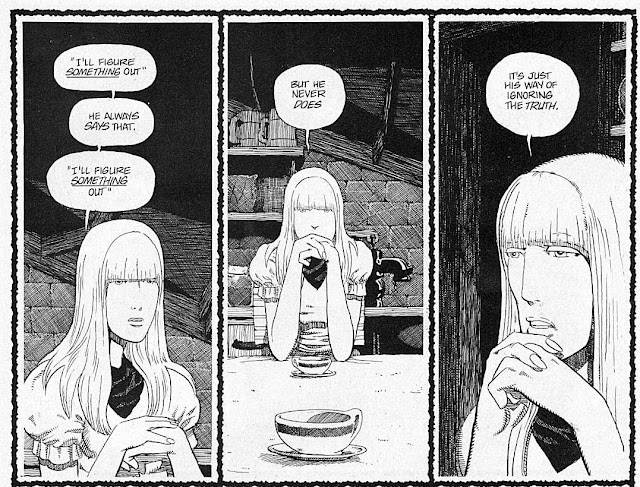 High Society can count as a single novel, but was also intended to be read as individual issues, which meant rereading a chapter again while waiting for the next, and noticing certain details that wouldn't become evident until later.  It's only when the high point of Church & State kicks in that you're flipping the pages at a rapid rate to see what'll happen next that it starts feeling like encroaching on familiar territory.  It's a long road getting there, and may not always to everybody's tastes, but is still an enriching process for anyone brave enough to take the plunge. 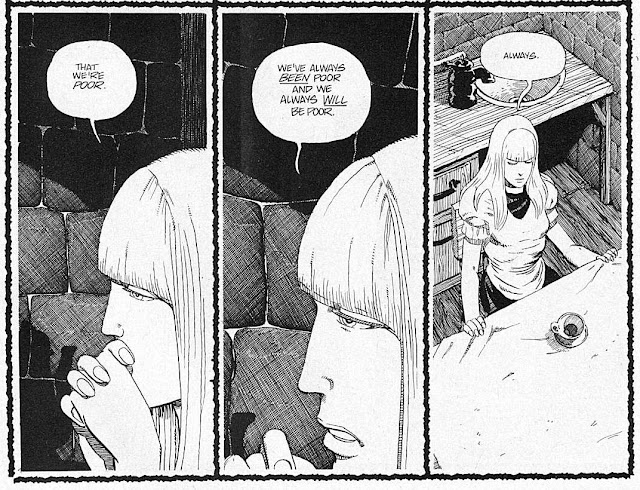 EDIT - I'm ashamed to admit that there was another Pony metaphor that just occurred to me, that would be just as easily applicable here: 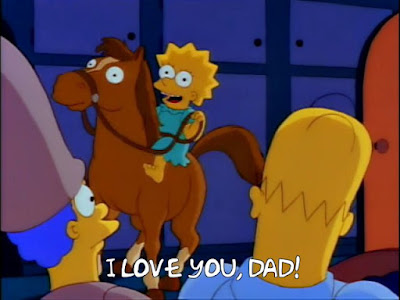 And, just for extra reference, in case anybody missed it the first time around, here's My Little Shetland Pony again: 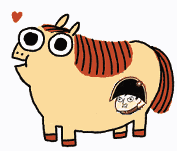