As I mentioned in my previous post, there was a number of daily strips that strived to contribute a little more than the typical joke-a-day format, and make themselves more relevant to an increasingly competitive market.  Starting off with a fairly typical setup, the Blondie comic on September 2, 1991 ended on a rare dramatic note.

Apart from a brief stint where Dagwood joined up with his wife, Blondie's been Catering for close to twenty-five years by now.  So, chances are, new readers are entirely unaware that there was ever a time when she was just a mere housewife.  Likewise, for how Blondie (and Dagwood's) babies were born, and how they got Daisy, their silent background commenter.

At some point, I should get around to showing several stand-alone strips featuring Dagwood's Carpool co-workers.  Nobody else seems to be doing it.

If it's any consolation, she talks with her small circle of friends before going out and doing any rash business decisions first.  At this stage, she hasn't finalized what job would be just right for her - just throwing options here and there.

But in the end, she's still worried about her husband's reaction. 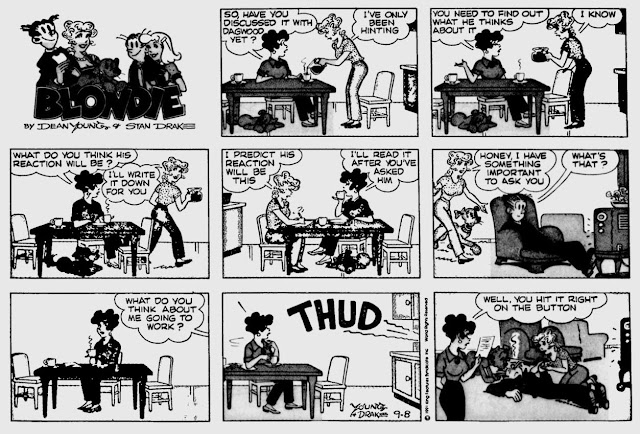 At the time, I didn't really like the approach taken here, since Dagwood's overreaction smacked of being too much of a pushover strawman who was easily won over after a few well-placed persuasive counter-arguments. 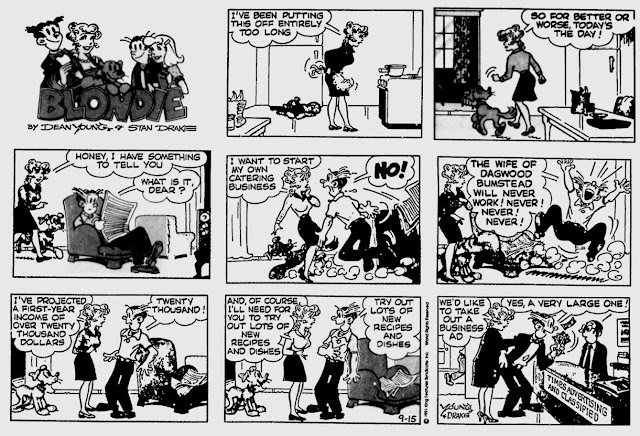 Then, having finally decided on a proper paying entrepreneurship, Blondie goes through the rigorous procedure that is bureaucracy.

And of course, there's the ever-persistent threat to her wares constantly being sampled. 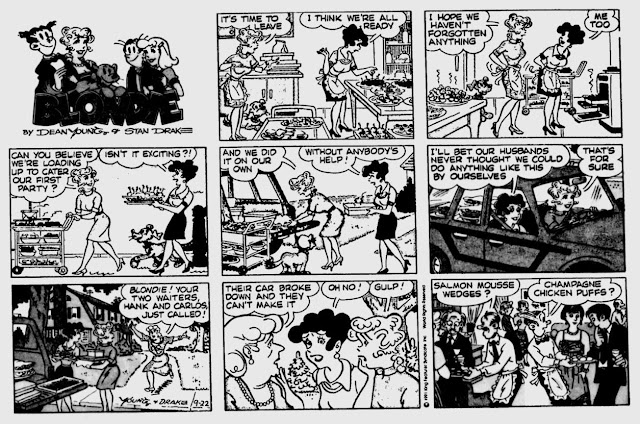 The first instance of having their husbands help out.

I should point out that these scans are mostly taken from online archives.  And, while there'd be little to no discernable difference between these and the daily comics; but a sample from auctioners selling original art shows more defined details that'd be lost in numerous low-res reprintings.

And then, there's one last hurdle to overcome - finding a proper vehicle to use. 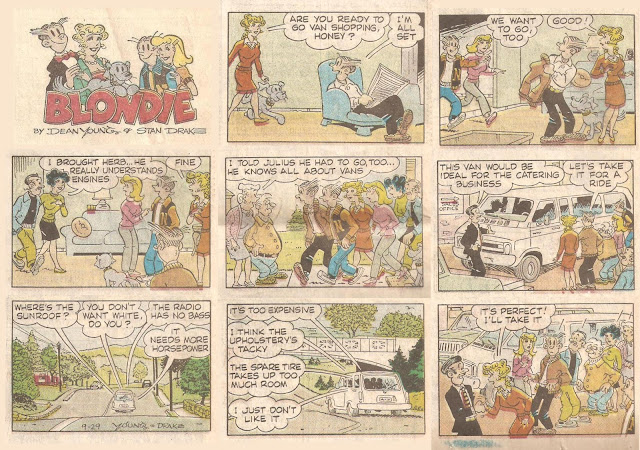 And then, just one day after the last Sunday, we return to business as usual, with this comic showing up the very next day.