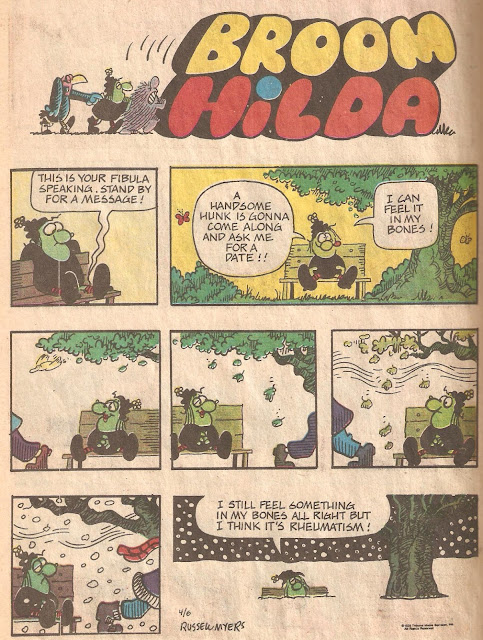 Unrequited Love is a mainstay staple of the Funny Pages - one-sided triangles where people's gazes are firmly locked in a singular direction like a one-way sign.  Longing for a Romantic Interest that never reciprocates.  Or Romantic trysts that never get anywhere.  (All influenced by Peanuts in one way or another) Broom Hilda firmly lands in the latter category - a regular Lena Hyena who has a constant mad-on for any male who'd cast their gaze her way, whether they're interested in her or not. 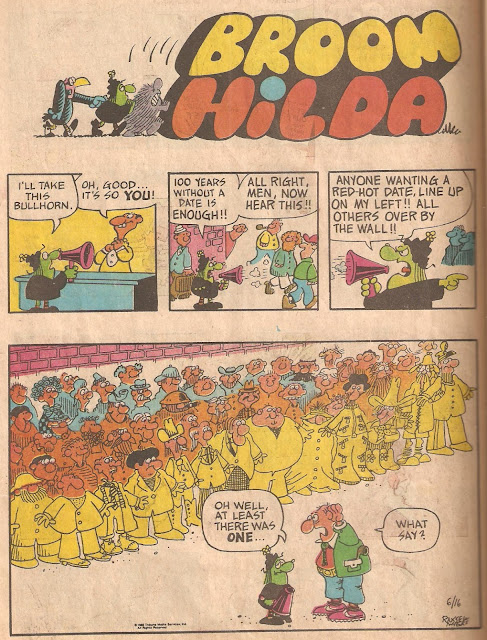 We don't know too much about Hilda's previous married life, save that she was first married to Attila the Hun, which may or may not have had an averse effect on her personality for the rest of her life.  It may have ruined her expectations, spoiling her, since anybody else would've paled in comparison. 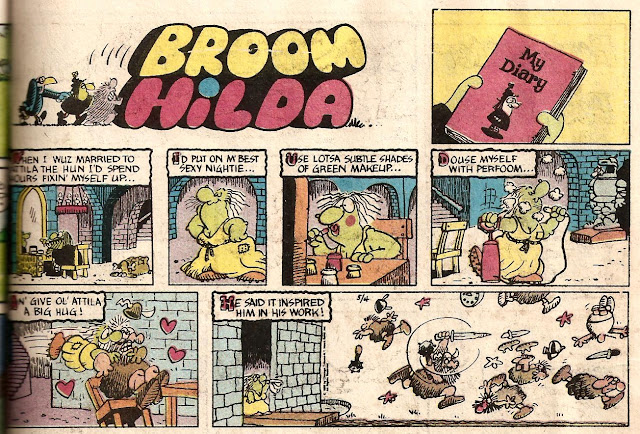 Other marriages have been mostly regulated to the rare dailies, such as Rip Van Winkle, which ran for a week.  Her husband was simply asleep for the whole duration of their married life.  And that was one of the normal ones.

The only prospect that one gets from her brief marriages is that these guys must've been pretty damned desperate, coerced or deranged to agree to get hitched in the first place. 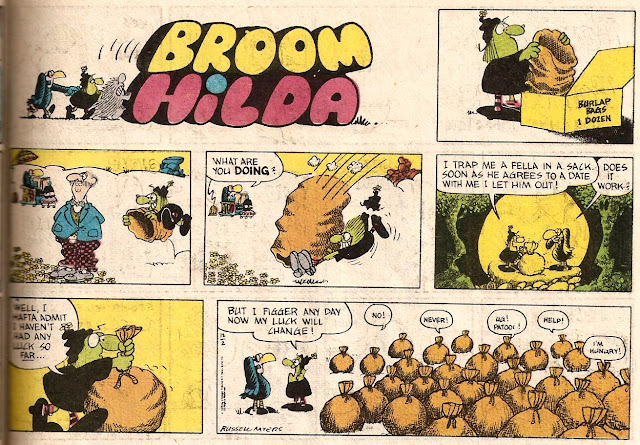 Even the prospect of taking advantage of a visual aids-less device like an old-school rotary phone doesn't give her much hope.  Not that writing via love letters would give much success either, since she doesn't show much interest or experience in that particular field. 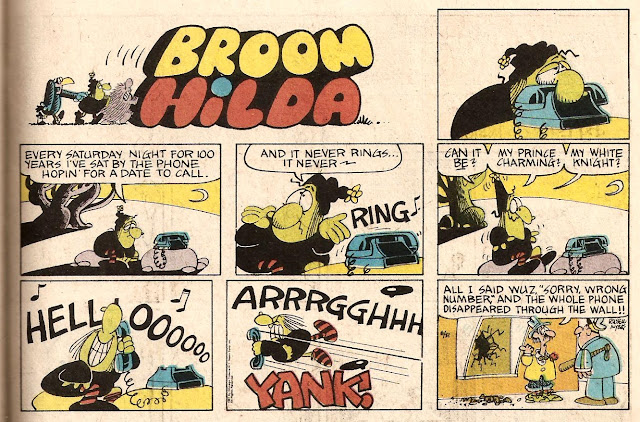 While she'd be perfectly happy with a warm body (Necrophilia being somewhat inappropriate to show on the funny pages), she wouldn't shy away from flirting with an attractive pretty face, proving she's just as shallow as the next guy. 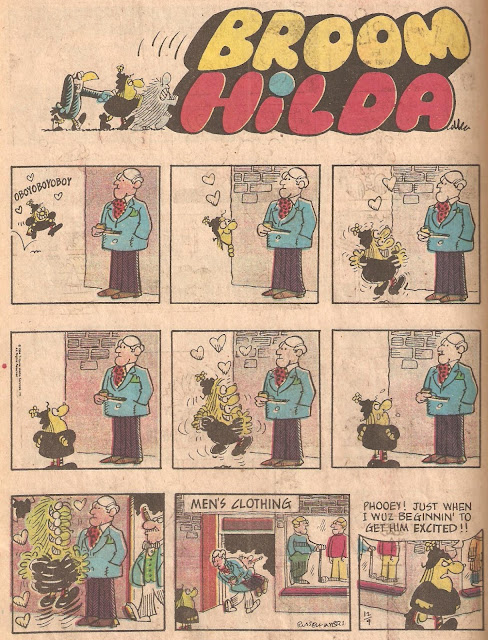 If it's any consolation, she's not particularly finicky about her choices.  She'd love a serial killer as long as they paid attention to her.  Being a stalked target would be considered a compliment. 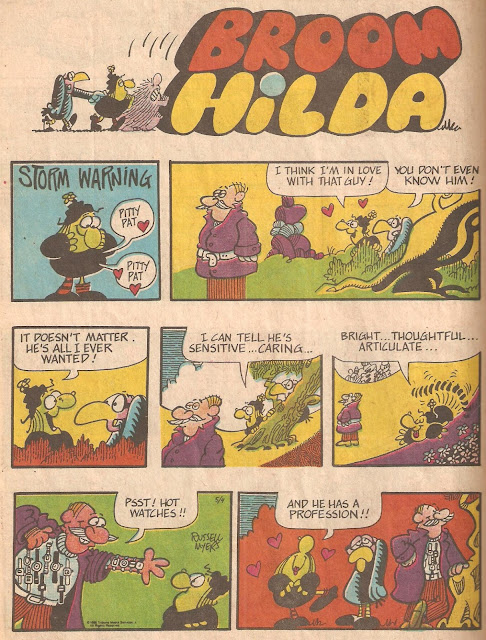 Actually, she probably wouldn't mind being fooled, if it'd mean getting shacked up with someone - anyone.

Though there seem to be certain... boundary lines that she won't cross. 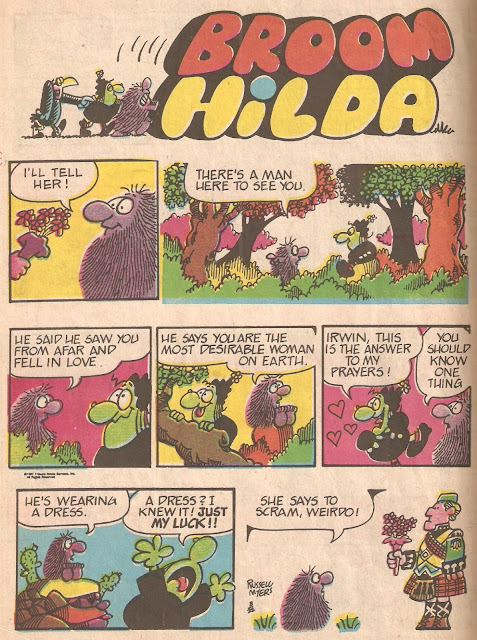 It's not that she's opposed to the prospect of Love.  It's just that there are certain limits to her taste.  (Even if that taste is defined by cheap beer and smelly undergarments.  Cigars having been phased out early in her run) 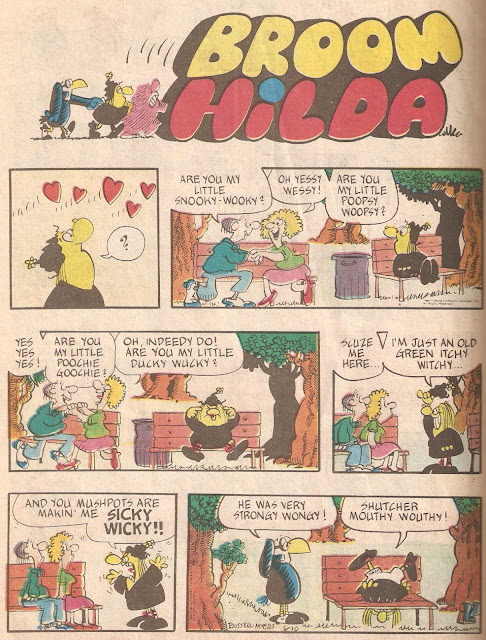 If it's any consolation, she's an equal opportunity offender.  She'll go after anybody, no matter who. 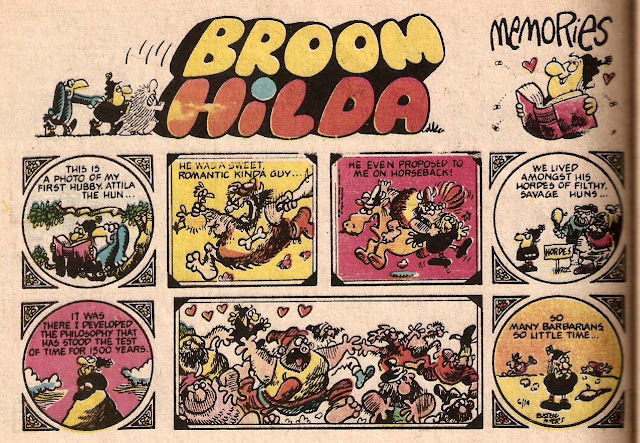