I've been neglecting doing any potential blog entries, because I've been captivated by the biggest Reality Show taking place via the illusion of the Presidential Election.  They've whittled away the competition down to the last two holdouts, and the stakes have never been higher.  At some point, I should compile the amusing commentaries I've made on social media (with accompanying links to explain their relevance) But the sheer amount of material available had very little for me to give any relevant feedback.  Like Trump's outrageous comments, one scandal simply spills over to the next.  And this wasn't made any easier with running Republican Vice President Pence's permission to let Trump go ahead and speak his mind.  Trump truly took these words to heart, feeling that he was now finally freed from the confining restraints of the Republican Party, despite all evidence that he was doing whatever he felt like.  That meant that up to this point, we'd been dealing with the calm and rational Donald Trump.

At this point, the prospect of a Trump victory is looking more and more to be a fantasy.  The only question is how many more people is he going to drag down kicking and screaming in his death spiral?  If you want an idea of where your politician's true values lie, just remember after putting up token resistance, who cozied up to a man who enjoys pushing people around.  Because, let's not bandy words about - Trump's natural state is a bully who likes to pick on opponents who can't fight back.  Since he's not finding any success at intimidating Hillary, he's going after weaker targets, who won't strike back, like Republicans or Beauty Contestants.  Hardly the kind of temperament who'd stand up against Vladmir Putin.

His usual strategy of intimidating his opponents by sheer bluster and insult isn't working against a candidate who isn't willing to treat him with kid gloves, and knows all his triggers and weak points.  And none of his usual blustering tactics are having any effect.  There was also his attitude at the end of the first debate where Trump thought his microphone wasn't working - Hillary kept ignoring his mansplaining interruptions.

Like The Hulk, whose a force of unspeakable rage, who is constantly hounded by puny Bruce Banner, Trump's biggest enemy isn't Hillary or the GOP, but Trump is his own worst enemy.  There's been so many instances where Trump could've benefited from having Hillary face media scrutiny.  Only, he's so vain and egotistical, he can't stand the idea of having attention diverted away from him onto her.  So he doubles down on spouting insane rhetoric in the hopes that it'll draw the cameras away from the dull woman back onto the media spectacle, HIM.  Whether it's wondering out loud why women don't go complaining to Obama about his infidelities, to threatening to jail Clinton, to blaming the "international bankers", to casting rumours about potential voter fraud.  (to avoid looking like a loser when he doesn't win).

Adding to Trump's long list of grievances, he's upset that his spur-of-the-moment un-PC quotes have been used for Clinton Attack Ads, Taken Totally Out of Context.  No, wait, their message are just the same as they sound IN context.

For a while, it looked like Trump would want to bow out of doing the Third Debate after having abysmally lousy and declining approval ratings, despite all his internal convictions that he did perfectly well with no prep whatsoever.  But, like the proverbial forced trilogy that milks the series popularity, rather than stopping while they were ahead, Trump decided not to pass up the chance to appeal to an ever-increasing audience and let Clinton steal the spotlight away from her.  (Good thing too, since Clinton's approval ratings only go down when Trump's not calling attention to himself)  After the hilarious meltdown of the first debate and rather lukewarm second debate, the third can only be a mix of the first two.

It wasn't until recently that he challenged Clinton to a drug test for controlled substances that I recalled a similar comic run I could tie this latest bout of insanity to.  Like Duke's run for Presidency, chalk this up as another parallel to the Trump campaign without actually referencing the man.

The only way this cunning strategy could possibly backfire is if Trump was asked to do some drug testing of his own, which could show him being overly dosed with multiple over and under-the-counter medications.  Which wouldn't be entirely out of place, considering his acting like a dope fiend during the last debate.  Besides stalking behind Clinton, wandering around the stage and clutching his chair in an attempt to stay conscious, he was also sniffing like a coke addict with allergies.  Most people took his actions at face value, while others paid closer attention, and observed the pattern that, like a politician whose lips move, Trump lies whenever he sniffs.

But then, strategy has never been Trump's strong suit.  In an attempt to take down Hillary's weak points, Trump started off by accusing Hillary of having the same kind of infidelities as her hubby, because the sins of the Prez are visited upon the wife, or some such nonsense.  All while forgetting that he wouldn't be exempt from his hypocrisy for HIS affairs with his to-be wives.  Interesting that all the so-called admirable traits Trump fosters about Hillary, "She's a cheater, a Liar, a Robber, she knows Nothing, Can't be Trusted", are more applicable to himself.  He's basically projecting at this point.

When Trump took the low blow route of accusing Hillary of having an affair, it sparked an as-yet unconfirmed conspiracy in my head, not seen elsewhere.  As you know, there's the theory bandied about that Trump is a Clinton plant, designed to breed dissent and distrust from inside the GOP, breaking the old-boy's club mentality.  That's because years ago, Trump & the Clintons were once close friends.  So much that Trump once recommended Hillary for President.  (How times change...)

Thing is, if Trump ISN'T a plant, what would he be doing differently than what he's already doing now??
Though most of his actions have bordered on the incomprehensible and unbelievable.  He goes above and beyond the call of saboteurs where rational decency & logic would demand they stop.  But then, Trump isn't most people.  If this election were an airplane paperback, the premise would be thrown out for being too implausible.  My theory was that Trump was so confident that Hillary had an affair (not because rich & powerful people are an aphrodisiac, of which he's a prime example) but because he & Hillary had an affair themselves.  If true, the whole election would be a lover's spat on the world stage, the likes of which have never been seen.  I could only imagine the argument going something like this:


Trump: You had an affair with me, and you know it!
Hillary: (Smugly) Prove it.
Trump: All the evidence is right there in your deleted 33,000 emails!
Hillary: Release your tax forms first, and I might decide on it.  Might.

The only flaw with this theory is that Trump prefers going out with women his daughter's age, and wouldn't bother cheating with anyone who's less than a 10.  Though walking into women's dressing rooms or talking about grabbing their private parts is fair game.  After all, they're ranked 9 or less, and not worthy of his gaze.


"See, there are all these videorecordings where I DIDN'T assault them. I just gazed lovingly at their attractive forms, trying to best figure how to make them look better. They could use some breast implants, they could stand to lose some weight. At no time do you see me grabbing them by the pussy, no matter how much I wanted to." 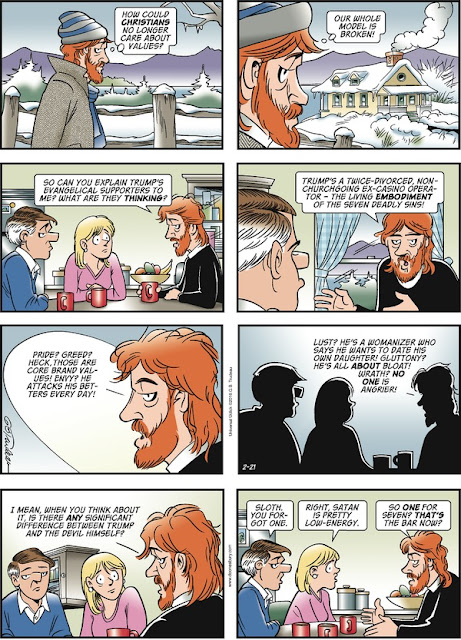 Man 1: "Man, that's a real fine piece of Ass! I wouldn't mind taking her forcibly against her will, thrashing her in every room in the house, having her crying in tears all the while!"
Man 2: "Dude, she's Six Months Old."
Man 1: "What are you getting all offended about? You should feel complimented that you've got a daughter worth banging!"

One of the widest miscomprehensions is that this election is a contest between two underdogs.  Nothing could be further from the truth.  Trump isn't interested in fighting for the common man.  His interests don't extend beyond establishing his (now tarnished) brand.  Trump isn't the underdog in this scenario - Hillary is.  She's faced countless scrutiny from opponents on both sides of the political divide for daring to speak her mind, and been vilified in all kinds of ways, from her opinions on the issues to the way she dresses.  No matter what she says, even if somebody agrees with it, they'll argue until they're blue in the face and try to convince others why she's in the wrong.  Chances are, if she'd been born a man, she wouldn't have to deal with all this hypocrisy.  (There'd also be the unfortunate relationship with Bill Clinton, but that's a hypothetical scenario not worth exploring)
The thing is, Trump doesn't really work either as an Anti-hero or an Anti-Villain. He has no self-awareness for that. He's more like a Thermonuclear Strawman. A vast venerable collection of all the worst humanity has to offer bundled up in a convenient package.

I suspect sometime in the years to come, after all this madness has died off, and the volunteers for the Trump campaign have released their tell-all stories behind the scenes (which'd be on the best-seller list for months) we'd be treated to a new genre of novels where scrupulous politicians seek to convince an over-the-hill business celebrity to go over to their opponent's side with the intent of sabotaging them, only for said celebrity to wind up succeeding beyond their wildest dreams, and being unable to pull them out once they've done their job.  The first title will probably be, "The Plant."
Posted by DeBT at 3:51 PM