I often make a point of nitpicking certain traits in comics that I find personally annoying.  Most of these faults comes not from wanting to bash a childish medium, but from caring too much.  There are certain problematic elements, from making silly preventive mistakes on page layout, or repeating stock poses that, once innovative, suddenly become overused.  Take for instance, the "landing from a distance when knocked back" pose.  In the past, athletic heroes had difficulty rolling with the punches, which usually resulted in their getting knocked out, or falling flat on their backs.  Nowadays, everybody seems content to lie their legs flat, with an outstretched arm and spread fingers.  Sure, that's cool and reliable, but surely it's not the only landing pose possible, is it?  How about a somersault flip to land softly?  Of brute force land, sinking the upper body, hidden beneath two outstretched knees?  Use your imagination, people! 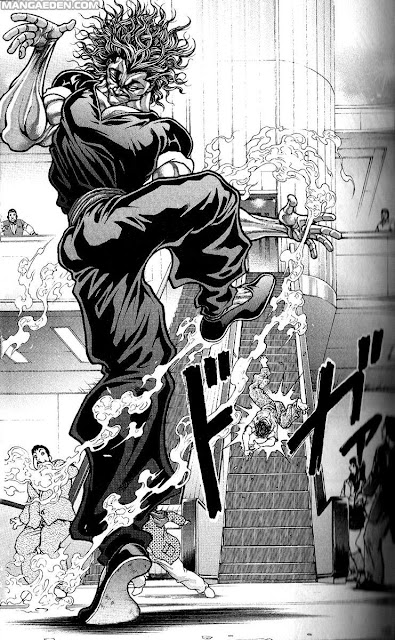 However, that's not what I want to talk about, though it becomes tangentially relevant later.  In my last blog post, I mentioned the annoyance of not being able to see people's faces while they're talking.  In other mediums, you have the convenience of having the camera firmly fixated on the character's face in full view.  And that also includes people who are being knocked back. 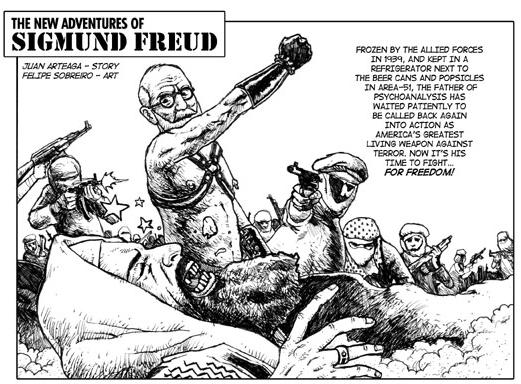 One thing that often annoys me about serious American-style art is how static the majority of it is.  We see someone throwing a punch, and someone's head knocked back, but we don't get the sensation that they've been hit.  And when two guys fight, fight, they make a point of showing their muscular abs towards the screen, rather than how they'd ACTUALLY look confronting towards each other.  There's way too many examples to list, but here's a sample that bothers me in this otherwise excellent tutorial of people getting hit: 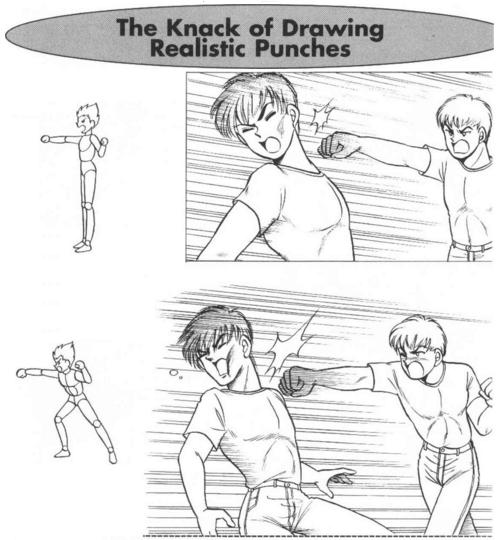 It's minor, but you can see both character's chests, when it'd functionally make more sense to have the punchee's stance facing his attacker.  But then, you wouldn't get to see both their impressive chests.  In this stance, it looks like the puncher's assaulting from sideways.  EscherGirls has a reputed legacy for posting the most outrageous contortionist positions females (and the occasional male) will twist themselves in order to show their sexy bits at all times.  (Mostly from a misunderstanding of how men's bodies can twist, and being appealing to the male gaze)  What's less remarked on is how often heads will do a full 180 to talk to someone while they're doing something else. 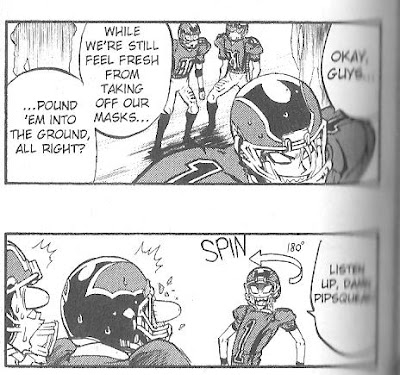 This is something that's so subtle that you don't even notice it, even when the perspective of their anatomy screams otherwise.  We're so used to seeing the character's faces that we feel alienated if all we see is the back of their heads without any interesting background details. 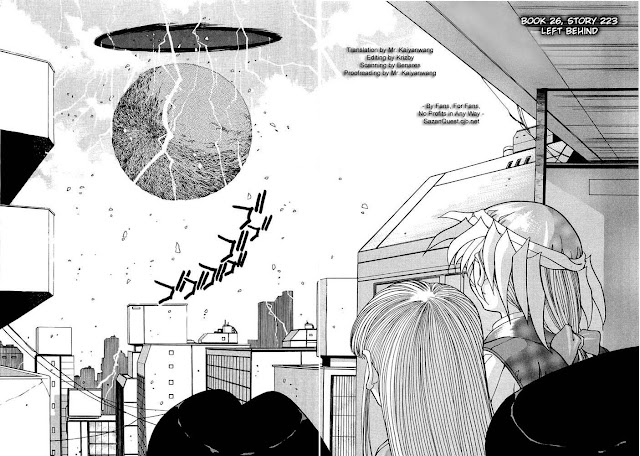 In fact, we're more likely to be put off if we don't see someone's face.  The horseman from Erstwhile Tales (Iron Hans) here is looking back at the peasant from a position that should be impossible, but because we're so distracted by his excited reaction, we don't even notice the disparity. 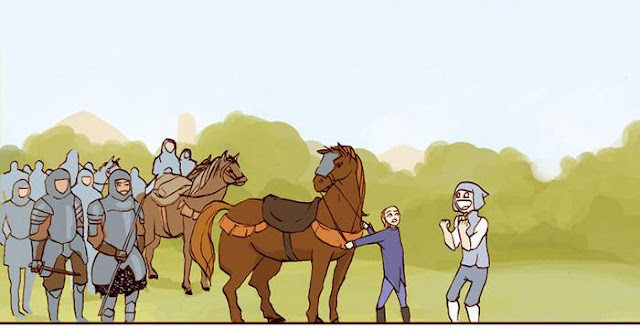 This is prevalent even in children's entertainment.  Here's a page from the Golden Shape Ernie & Bert Book.  In his task to show the convoluted line of process to rationalize putting a pot on Bert's head, Ernie leaves the room to gather the next item he's put to replace the previous misplaced object.  While going away, Ernie looks back, and we think nothing of it, because he's a Muppet. 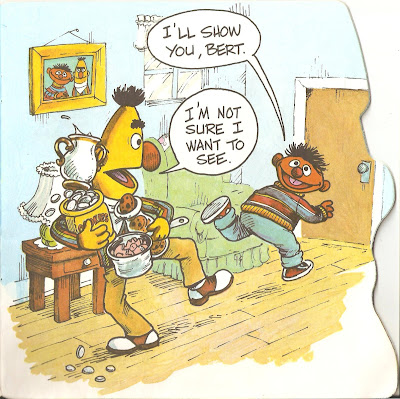 Sometimes, it can be the result of a rushed job.  The Foobiverse used to be a repository of snarky commentary and observations about For Better or for Worse in its declining years.  But that same barbed attack lost much of its power when focused on the early years, when FBOFW was at its best.  Its saving grace is finding the hidden commentary that, like Al Capp's Lil' Abner, only becomes apparent in hindsight.  One of these discoveries lies in the cartoonist's need to meet her deadlines, via Lynn Johnson's abhorrent refusal to use erasers.

While this looks fine at first, the first commenter edited a panel to show that Elly should've been dragging stuff out of the impressively-sized crawlspace duct, rather than reaching over her shoulder.  From the wrong side.  (Though there's a lot of empty space, since the vinyl recordings are missing in the redrawing)

In other instances, it can be so subtle we don't notice at first, and either try to understand what we're seeing, or just overlook it and press on, figuring it as a minor annoyance, and wanting to get to the meat of the story instead. 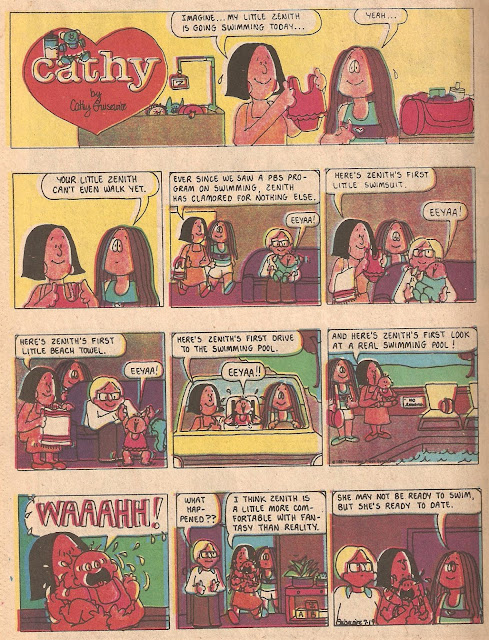 For a long time, I was confused about baby Zenith's position, until I took a closer look, and realized why:  She was clutching her mother, while also looking back at the pool in horror.  If you look at her legs, it would've looked like she was dislocating all her limbs in the process.  However, if you consider that it's just her head that's twisted around, then her position makes much more sense. 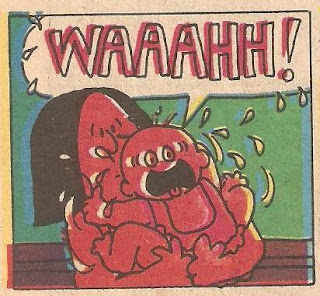 Now, these disjointed heads look perfectly normal when faced head on.  That is,  as long as we don't have to face the nightmarish perspective from Tsuge Tadao's Trash Market: 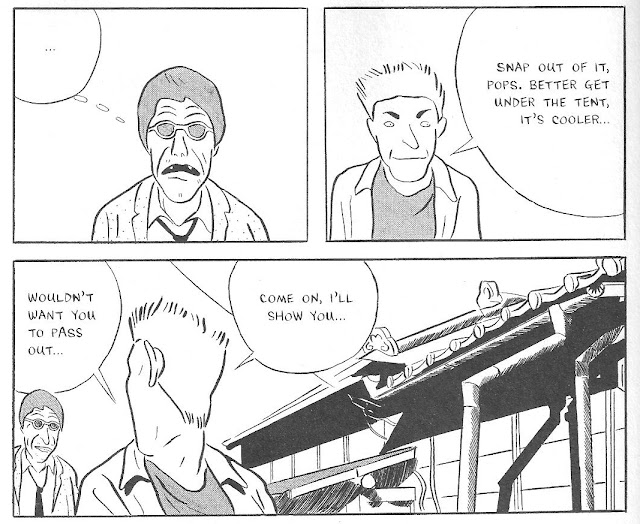 Just an example of how cartoony art helps to tone down the body horror that would look downright disturbing if viewed the other way. 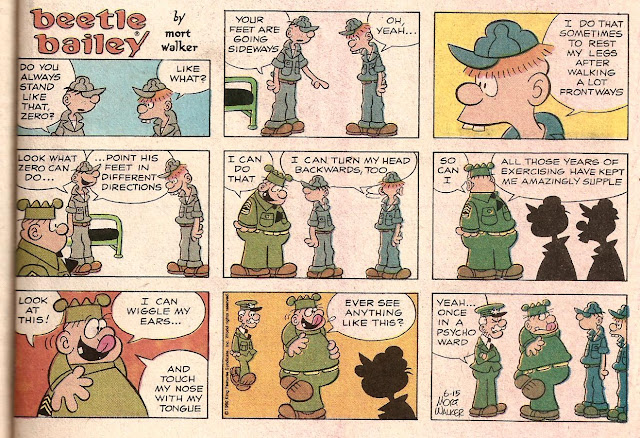