It must be exhausting to create as much material as Craig Thompson has.  His debut mainstream work was Goodbye Chunky Rice.  He reached brand name status with his autobiographical 600 page comic, the breakout hit Blankets. Then he followed that up with a 700-page Habibi.  Overall, he's done impressive awe-inspiring illustrations of stellar quality that's been painstakingly laboured over the course of years.

And yet, I find Thompson's stories to be lackluster as a whole.

Part of that distaste could be the subject material.  Craig Thompson's comics have been noted to touch upon the themes of sexuality and religion, which have been covered extensively elsewhere.  Another fair comparison is that he emulates Will Eisner's bombast dramatics and over-empathization, which I was never quite a fan of.

Habibi was an attempt to try to bring some beauty to Arabic storytelling in an age of rising tensions about anything associated with Islam.  For the most part, the narrative manages to be rather gripping, but after the two-thirds mark, it devolves into Osamu Tezuka realm, where an optimistic fisherman does the monologuing for the main characters.  Anybody who's a vivid reader of the Manga God should know what I'm talking about.  Further complaints were that the comic focused more on the beauty of Arabic writing, rather than on the meaning of said writing.

One of the worst criticisms a writer can get upon a reader finishing a seminal block of work is not retaining or remembering anything significant about what they've just read.  Even worse is when a casual reader re-reads a book on the shelf they think is a new title, only to slowly realize that they've already read it.  When a piece of literature has failed to make an impression on you, that's a bad sign.  After coming back to Habibi after so long, I could barely remember anything past the sparse significant events in the harem, the most notable one being "transforming water into gold".  For the most part, my general reaction was very much like the sultan's; "I'm bored."

By that same token, I found going through a recent Craig Thompson book more geared towards children, the modest in comparison amount of 300 pages, Space Dumplings to be another chore. 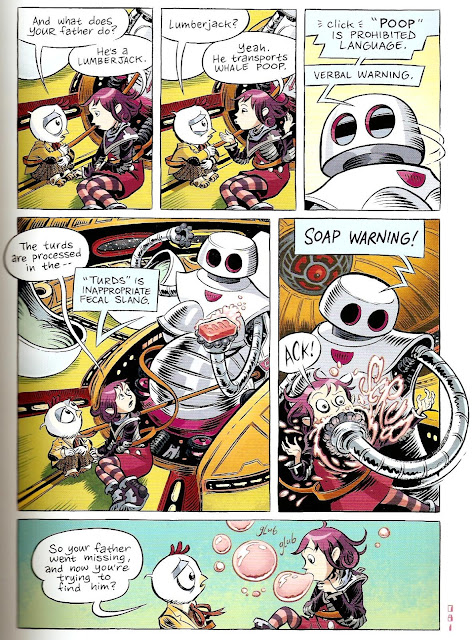 By all rights, the premise should be an attention-grabber.  In the far future, a A young girl, Violet, is living with her working parents, who are both in danger of being fired from their jobs.  The father is a trash collector, and her mother a fashion designer.  Despite their long hours, they manage to make time, even though their attention puts them at risk for neglecting to pay attention to their little girl.  (The symbolism isn't hard to miss here) 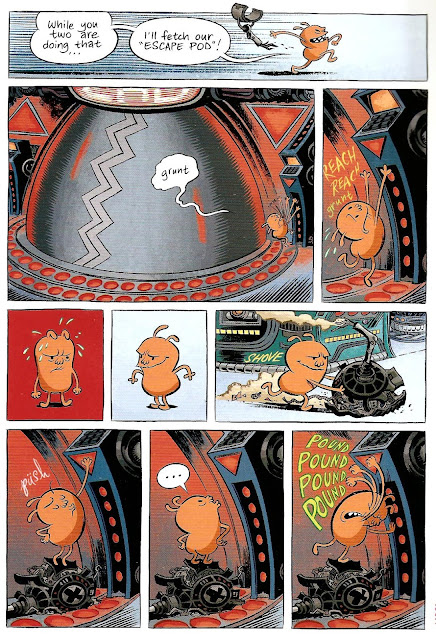 The drama officially starts when disaster strikes where Violet's father is working, from space whales causing diarrhea spills, spreading slime and gunk everywhere in the vastness of space, infecting nearby plants and space outposts.  (Don't question it, just accept it)  Somehow in a sequence of coincidences, Violet's father manages to get himself literally swallowed by a whale.  As with Thompson's religious upbringing, there's an oblique parallel via Jonah's voyage.  I'm aware that religious metaphors are common staples of storytelling, but when it's made painfully obvious by being specifically pointed out by the characters in the story, it begins to grate on the nerves.  It isn't long before this natural disaster prompts the girl to go on a madcap foolhardy rescue attempt to get her father back, getting into trouble, and picking up some quirky friends along the way.  One of Violet's friends is very clearly a doodle from Craig Thompson's travelogue, Carnet de Voyage. 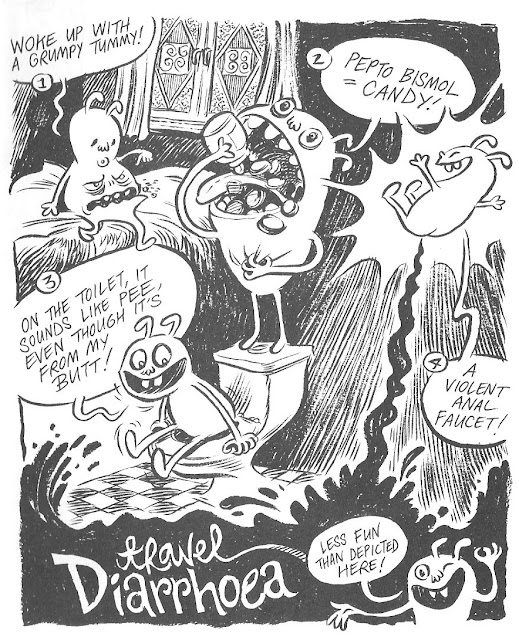 The other is a reclusive genectically modified snotty intelligent chicken who's more interested in doing solitary research than in engaging in potentially germ-rife outside environments.  No prizes for guessing whether he'll change his philosophy while being unwillingly caught up in the girl's adventures.  There's obvious setups, and then there's transparently naked intent.  To explain his existence, there's tales of a chicken rebellion for giving rationale behind his being. 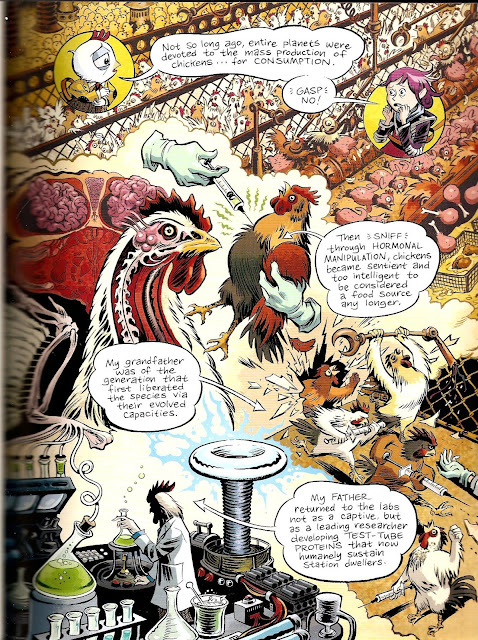 It's not bad, but I need more substance than that.  Hardly anything is made use of this beyond explaining why there's an anthropomorphic chicken is wandering around, and only this chick and his father.  No attempt is made to explore the fallout over this rebellion of science gone mad.  Few works can be as overly insane as Fourteen, but that's not the point.  With such a condensed history, I should feel invested, but all I feel from this page is emotional manipulation.

And that's my main problem overall. - the whole comic dwells in social commentary that feels extremely ham-fisted.  The satirical background of a society more concerned with style over substance lands with all the subtlety of a rusty lead hammer.  I'm reminded of James Cameron's Avatar, better known as Dances With Smurfs, which despite its impressive box office results and hype being the next Star Wars, left no cultural footprint.  Thompson's lack of substance in his works would be ironic if he was more self-aware about his shortcomings.

When chicken Eliot finally confronts his long-neglected father, the family reunion is less than expected with Daddy issues.  The Rooster father reveals himself to be very much in the jerk genius vein, along the likes of Gendo Ikari, or Astro Boy's Dr. Tenma. 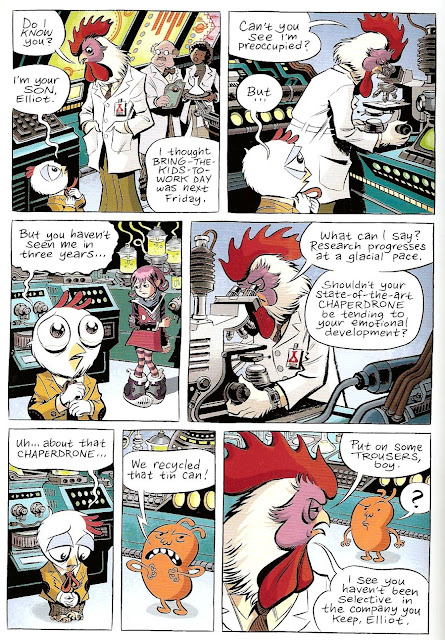 Ultimately, the matter of resolving the world-destroying crisis depends on getting a baby space whale back with its parents.

Granted, cartoonists' political leanings are generally easy to suss out, and their issues may bleed onto their works in noticeable ways that can either elevate or hinder the quality of the material.  (In other words, never go full Dave Sim)  When reading typical escapist fare, I expect more than a simple retread of familiar elements that's a basic stand-in for current events.  If there's something that sticks out in my craw, it can fill me with boredom and loathing.  This page of Elliot suffering a seizure is visually interesting, but nothing within the layout really resonates with me. 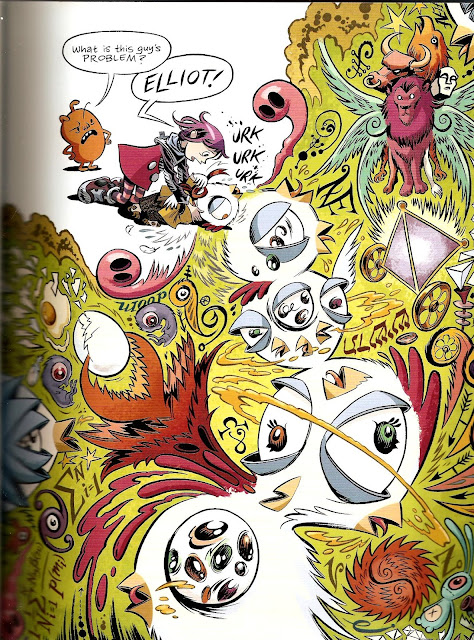 It's also the problem I have with easy-to-read children's comics, such as Owly, Ameila Rules, Tower of Treasure, Lunch Lady, and Amulet.  While they're fine and dandy for introducing the basics for words/pictures relations, sequential art and are age-appropriate for their intended audience, they feel devoid of content or feel too saccharine for my taste.  Overall, I'd say that what any budding reader would value in a story overall is authenticity.  If it doesn't feel emotionally real enough for them (all pretense of illogic aside) it won't grip them the way they're intended to.

And yet, Hilda and Zita the Space Girl for instance, are all-ages works that engage me in a way that I don't mind rereading that other titles don't deliver.  I suspect it's the use of humour that keeps me coming back. That's what's lacking in most of these children's works.  The highest selling point in a comic should be to get their point across in a funny way.  Humour is one of the universal constants, but can also be a huge stumbling block for translation issues, as well as the desire to be taken "seriously" as an art form, which may explain why so many American cartoonists want to distance themselves from childish associations.

Jason Shiga's Demon was created as a challenge to himself, to create a comic that was one page longer than Habibi.  Despite the fact that the two works are drastically different both in terms of artwork and story, I'm more likely to reread Demon, even though I've memorized whole swatches of the story, compared to the few pages in Habibi, simply because Demon is more engaging on an intellectual level.

Not that European comics aren't guilty of the same sins as listed above.  Many gag-centric comics have a basic premise that takes too much time on a whole page layout to get to the weak punchline, when half that space could do.  Most likely, I've been spoiled by mainly reading Asterix/Tintin albums.  The former took a basic blank slate child detective whose early amateur globetrotting adventures matured into timeless classics remaining relevant long past the political news that inspired them.  The latter was originally printed in a magazine aimed at an adult audience, before being considered suitable for children.  (The numerous clever puns was a bonus) Much like Alice in Wonderland's mythology, the intellectual level gradually rose so that what was once considered adult fare was now commonly known to be considered suitable to children.  Somewhat similar to how Fairy Tales with their dark undercurrents of cannibalism, threatening environments, and starving carnivores, were readily accepted through osmosis.  Rather than dumbing down material that could be considered understandable to younger audiences, just explain a complicated concept using very basic terms.  The two sound similar, but they're significantly different.  One is simply saying 2+2=4; the other is condensing E=MC2.

If we're going to present material that'll engage children, it should be intellectually stimulating and visually pleasing.  Tall order I know.  But that's all part of the challenge.
Posted by DeBT at 12:21 PM