When it comes to advertising a product, it's not a bad idea to use as many promotional platforms as humanly possible for maximum exposure.  Unless your product stinks, then you'd be better off playing it safe, and use the same old formulas you're familiar with.  The problem comes when time-sensitive material starts outpacing the era they appeared in.  For example, this old Crest pump commercial combined hand-drawn animation with stop-motion claymation.  You'd have to look long and hard to find a more time-consuming animated method, all for the sake of a 30-second slot to draw excitement over the latest technological marvel in toothpaste disposal via a pump.  (Not just limited to shoes!)

That self-confidence booster over the simple accomplishment of not getting any cavities combined with all the celebration of a Hollywood award show was simplified below, and added a boy for further identification material, I'm guessing.  (Or a callback to the first Hooray commercial) 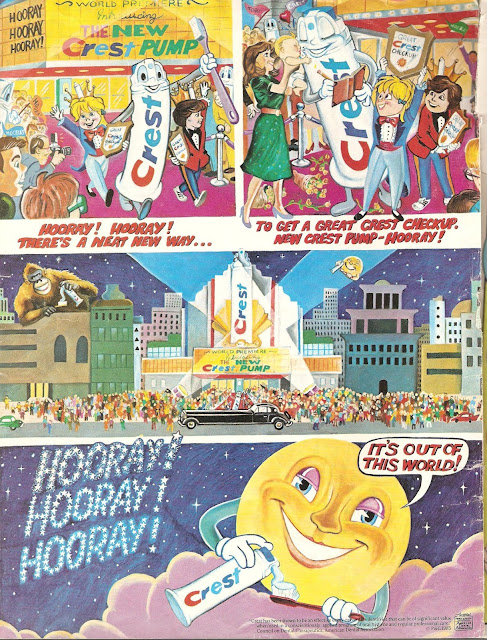 There are several articles about old advertisements, but not many about those that were adapted into comics.  I figured somebody should talk about those ads.  And that somebody would probably be me.  Of course, it turns out I'm not the only one, since the most likely culprit of such ads are regulated to sugar commercials.

The above condensed the inherent zaniness of Candilicious into a single page. 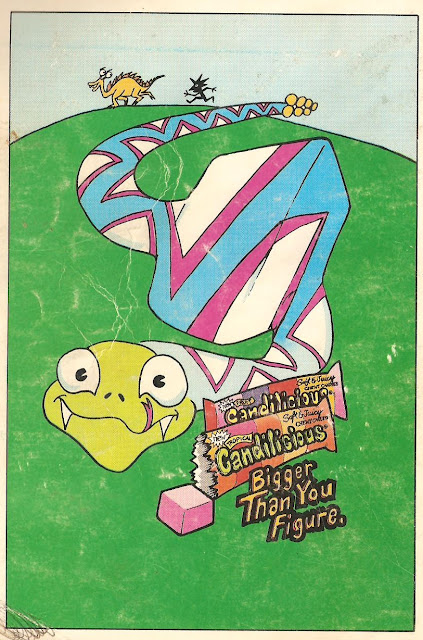 These ads would be fine enough on their own, but they were little more than weak adaptations to the source material, and thus, would lose much of their potency being far removed from the memory of their airing dates.  Though some ads, such as The Flintstones sharing a casual smoke are best left forgotten in favor of higher quality material: 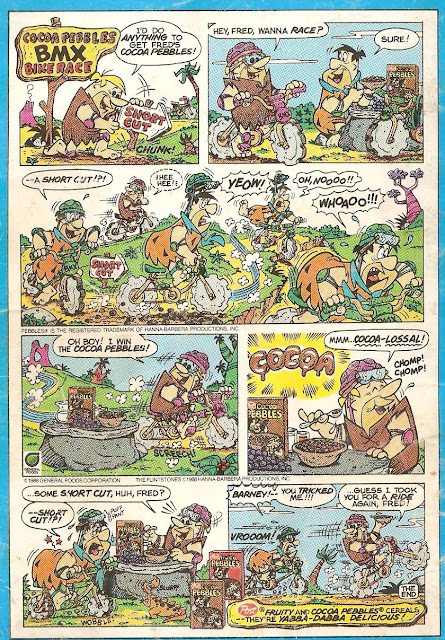 On a nostalgic article I can't seem to find, it mentioned that there were two very different Barney Rubbles.  You had the normal easygoing Barney on The Flintstones, who was something of a slow intellect.  But when it came to Cocoa / Fruit Pebbles, he became a talented trickster, constantly finding new and creative ways to trick Fred Flintstone out of his breakfast cereal through paper-thin disguises.  (Usually with Dino helping for some reason)  The fact that they used Bugs Bunny's voice may have had something to do with it.
A purvey through a comprehensive collection sees many of these attempts were unsubtle tie-ins to popular animated movies.  (I won't name names, but many of them seemed aligned with Disney cartoons)

Sadly, when Mel Blanc died, the legacy of future Pebbles commercials died with him.  They were replaced with the Flintstones' daughter promoting the things, but despite the name similarity, it wasn't quite the same. 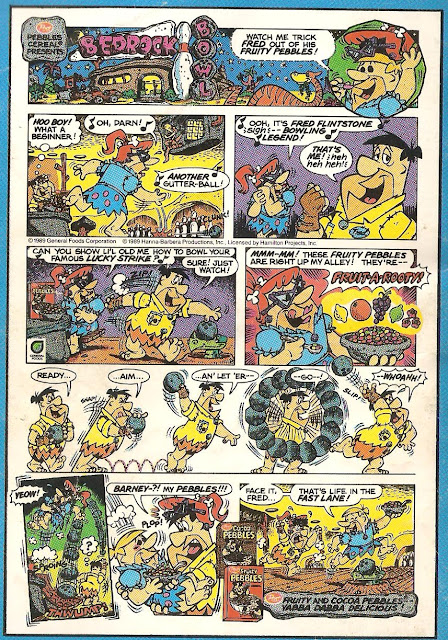 The guiltiest pleasure of these commercials is how they distill the enjoyment of a typical Warner Bros. cartoon into a single bite-sized segment.  Early Sugar Bear commercials had him hulking out on a sugar rush to recover his stolen cereal, before moving on to the calm deadpan bruiser he was more remembered for.  They don't make cereal commercials like these anymore.

Also, check out the commercial versus the Ninjas at the 6:12 mark where he passively-aggressively dodges ALL the Ninja moves without using a single Vitamin-packed PUNCH.  Most likely, this was a subtle jab at all the Soccer Moms complaining about the use of violence in children's TV shows, particularly those that focused on Mutants.
I'm just annoyed that the only way to find out what happened with the villain team-up near the end was to actually purchase the damn cereal itself.  This was a pretty common occurrence, starting with Capt'n Crunch and the Soggies (crossing over with Spider-Man), and extra promotions, such as prizes inside cereal boxes, extra marshmallows, or more sugar packaged inside these complete breakfasts.  (Strangely enough, there were never any extra vitamins, since they probably figured 12 were enough) 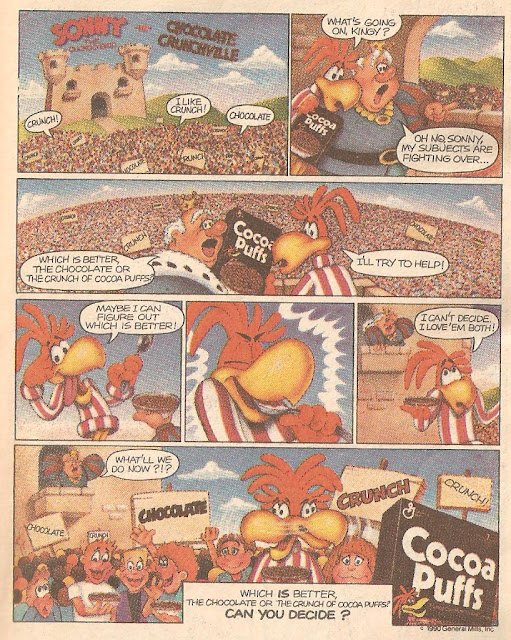 A welcome exception for this was the Cocoa Puffs where Sonny was tangled in a debate over which element best represented the cereal; the chocolate or the Crunch?  Going into a Referendum was a welcome change for Sonny who was usually forcibly enabled to try Cocoa Puffs that made him extremely hyperactive with excitement.  The above comic misses some of the amusing little touches, such as Sonny crossing his arms, fingers pointing in both directions at being unable to choose, the king breaking down crying, and rivals on both sides, pouring choice cereal into Sonny's bowl, one being slightly annoyed at spilling some cereal, from Sonny moving his bowl away to the other side before going back to the center where he would receive a "fair encouragement" to swing his vote.

As I'm missing the 2-parter commercial, here's the "prequel" where the villagers of Hushville are at first resistant to the sound of crunching cereal that's louder than a simple Snap Crackle or Pop.  (Incidentally, there was also a series of Rice Crispies commercials where the elves were kidnapped by monsters on the premise that "Food should be eaten, not heard!" and got out by their sound effects alone)

As it turns out, given the choice between chocolaty taste or the loud CRUNCH it'd make, the poll results, were announced with the King taking a bite of the latest cereal, revealing a regular "crunch.  A crunch that wouldn't've been out of place in the old Hushville, eliciting an audible GASP from the crowd.  Showing that between the two, sound wasn't the deciding factor.  Not that the company would admit to keeping the only element of their cereal that made it popular in the first place.

One of the strangest usage of Commercial Mascots is showing them unable to sample the very product they're selling.  (The other, being anthropomorphic representations of the product they're selling, like M&Ms, Kool-Aid and Mr. Peanut, the ultimate corporate sellout)  The biggest offenders of this is The Trix Rabbit (not to be confused with Nestle Quik's Rabbit), the Coooooookie Crisp Dog & Thief as animated by pre-Playboy (now ex) artist Dean Yeagle.

And then you've got Chester Cheetah's Cool Rules for snatching those elusive snacks.

Strangely enough, despite his first outings, all later failed attempts to snatch a bite of those elusive Cheetos were never numbered.

His first appearance had the formula pretty much nailed from the start.  He would appear all nonchalant until he noticed some passing stranger downing some prized Cheesy bits.  At which point, he'd go absolutely ballistic with excitement, then cool down and make his way towards the target, only to wind up short of achieving his Zeno's Paradox goal.  Despite not acquiring his intended target, he never loses his composure upon failing. 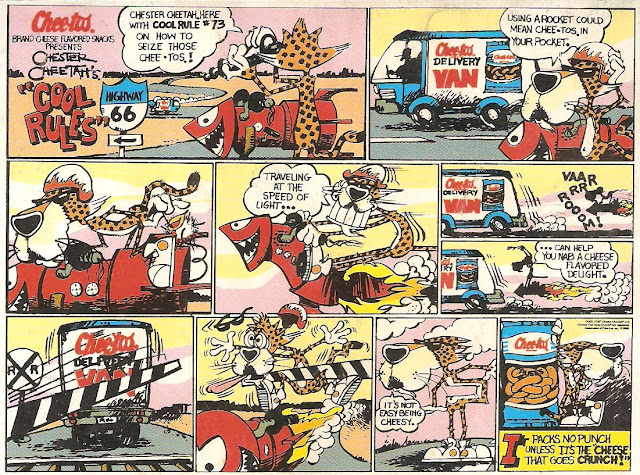 When these comics came out, they were little more than additive supplementary material with alternate interpretation of the same product.  But as time moves further away from their original airing dates, the collective memories of tying the two disparate elements together also becomes further disconnected.

Nowadays, if you're going to be seeing cereal commercials, you're more likely to see them on Prime Time instead of Saturday Morning Cartoons.  Not that SMCs exist anymore, having been squashed into redundancy from all-cartoon channels, which made cartoons a respected medium, but the trade-off was fewer cereal cartoons.  Back then, going for more sophisticated tastes would mean eating so-called boring cereals, such as Raisin Bran, Cream of Wheat or Shredded Wheat.  Even the double-sided Frosted Mini Wheat commercials that once aimed at both kids and adults now ironically uses a cereal mascot that's more likely to be seen on Prime-time dramas.  Even weirder, there are two different national representations of the Frosted Mini Wheat mascots.

Even the Honey Bee is a staple on late-night viewings, which is a far cry from back when he used to cross over with Godzilla.