When I first started watching fansubbed Anime, I was a little surprised and annoyed by how long the opening song was.  They seemed to be taking their sweet time getting the show started.  Just when I thought the song seemed to be winding down, it would suddenly resurge with another stanza.  Compared to typical cartoon openings which last around 30 seconds, a typical Anime opening can go upwards between 1 and 1/2 minutes to two minutes long.  Once I knew how long they were, I used this diversion to take quick drinking fountain breaks.  Then, gradually over time, like Seinfeld's jingle of ♪Cost-stanza♪, I began to enjoy these poetic renderings, since they were the closest thing to Music Videos that I could appreciate.*

It's a strange thing, knowing that you're irrevocably divided by a chasm between yourself and pop culture, and being unable to bridge that gap for unavoidable reasons.  Weirdly enough, I was able to greatly enjoy the fansubbed lyrics to many 80's Anime openings and ending theme songs, despite never having any access to pop music, and my only prior experience being cartoon openings like Ducktales and Garfield & Friends.  And just like other music fans whose tastes are hopelessly mired in the era they grew up in, convinced that their musical age was the best, and today's latest pop songs are just cranked out junk, I greatly preferred those to the lyrics pumped out in later years.  (I appreciate a few songs here and there, like Durarara!'s ending song, Trust Me, but the majority aren't catchy enough)  Though to be perfectly fair, ALL music is noise to me.  I just pay attention to the English text, and don't pay much attention to the Japanese lyrics.  Some of my old-school favorites include Nadesico, Maze: The Mega-Burst Space, and Yawara! a Fashionable Judo Girl.

Normally, I can't stand poetic renderings, since I'm unable to appreciate the lyrical flow of words, and I'm impatient for the poet to simply get to the point.  But if these flowery lines were peppered with moving images, chances are I'd be more interested.  Some people have esoteric collection of items that aren't normally collected, such as stamps and bottle caps.  My hobby was collecting fansubbed Anime openings/endings.

Since I had a limited amount of items I could borrow from the Anime club library, I was more willing to take out videos I'd never seen, rather than waste my weekly slot with a video I'd already seen.  For the most part, this meant trying to transcribe the lyrics as they were coming down on the screen, and revising them from memory.  I would have hastily scribbled down notes of what I was able to remember, and try to fill in the gaps of some of the longer sentences that would sometimes flash by in the span of half a second.  (Not counting misspellings and punctuation)  What I SHOULD have done was make VHS copies of the opening and ending themes for posterity, but I lacked the courage and fortitude to do so.  There WAS a tape from another Anime club that managed to put together a collection of various Anime openings for promoting their club, but when I later inquired about this video, the members said that it'd broke.  I've often lamented not taking advantage of this when I had the chance.

Typically, when commercial Anime is brought over, they're generally chopped down from their lengthy running time to a shorter number with a generally catchy theme song.  The Japanese DragonBall Z opening lyrics for instance, was changed from hope and blue wind to the more repetitive Dragon, Dragon, Rock the Dragon.  But even for a Martial Arts brawler, there were instances of surprising imagery. 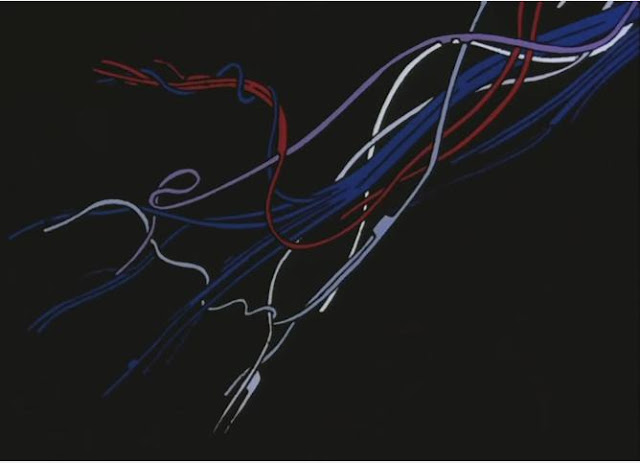 This confusing collection of meshed wires was later cleared up with the outline of an arm, surrounding arteries and veins. 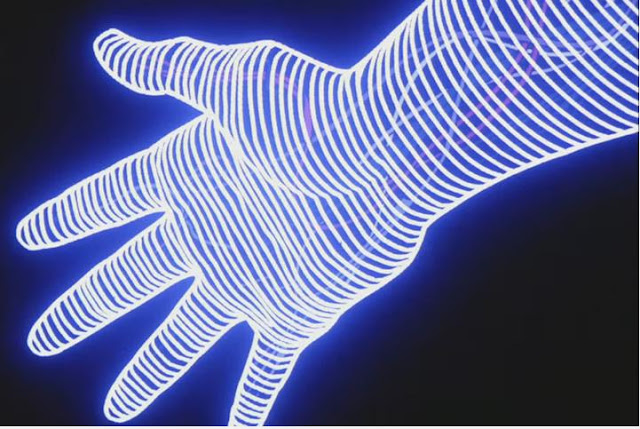 But that's just an example of surreal imagery that eventually becomes clear seconds later.  The real challenge comes not from teasing previews of characters that haven't shown up yet; but from symbolic imagery that isn't obvious at first sight.  Usually when symbolism in Anime is discussed, it's more along the usage of images in the show itself, such as the various random events in Revolutionary Girl Utena or Serial Experiments Lain. 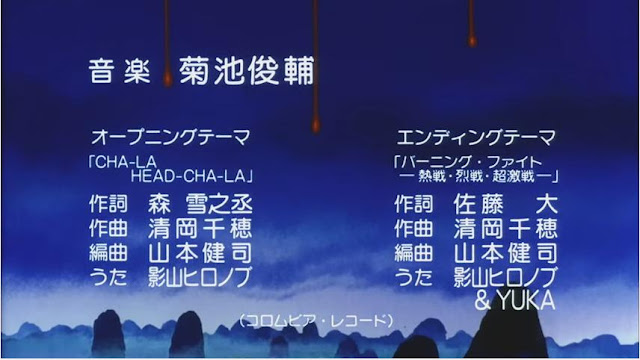 Using DragonBall Z again, the action goes as would be expected.  Then, at the 0:55 mark, there are what look like three teardrops of blood, slowly descending to the ground.  This is quickly forgotten with the next series of unrelated images, but then perplexingly, shown again later, at 1:39, lower this time, before erupting into a volcanic shower, and the main cast shows up for their dramatic pose. 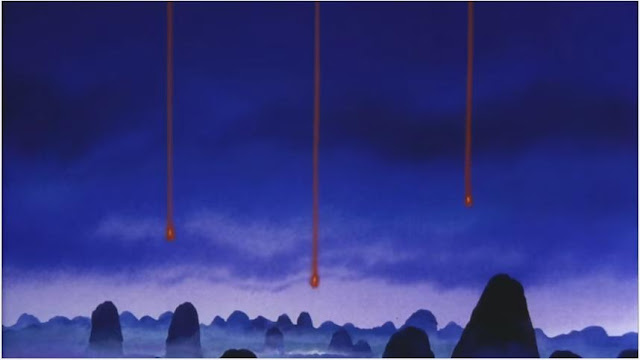 Unless you were already familiar with the mechanics of the Manga, you wouldn't know that these red drops were likely representative of the Saiyan spaceship capsules they used to travel in.  The fact that all three don't arrive at once isn't important - just the presence of one is enough to shake the mechanics of the typical status quo of the DragonBall world with implications that couldn't be possibly imagined.  This is sandwiched between images of Gohan cheerfully running and gliding with his father, most commonly seen in the closing credits for the American version. 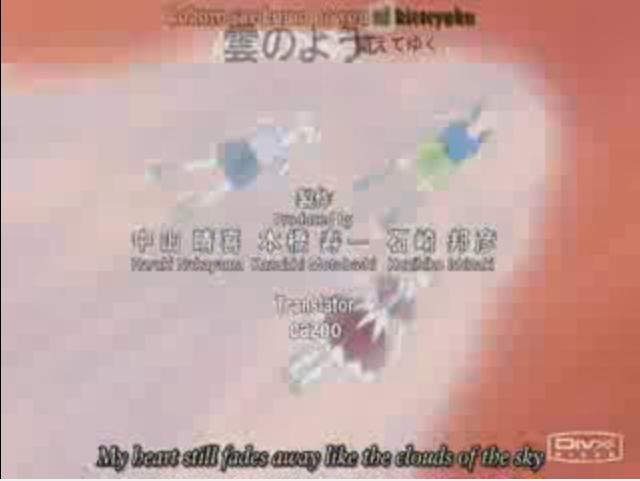 In fact, there's a fair number of Anime openings that feature lead characters flying through the air, even though that's not their defining feature or power.  Azuma, a baker from Yakitate! Japan is seen gleefully jumping out an open window in the second opening.  Most likely, instances of characters jumping off sheer precipices are left out in American releases, so as to discourage small children from emulating Superman.
One thing that I didn't expect that when these fansubbed titles would be officially licensed was that the translation attempts would be considerably condensed for a more general audience not accustomed to reading loads of text on the screen.  Unlike the majority of music fans who pine for recordings they heard in their youth, I have no equivalent access to viewing my nostalgic songs, since I still greatly favor the fansubs to the commercial version, faults and all.  It's not like I can simply download the musical recording to get the same effect - I need the yellow subtitles in conjunction with the Anime opening.  And finding those clips is becoming increasingly difficult when the few available videos keep getting taken down. 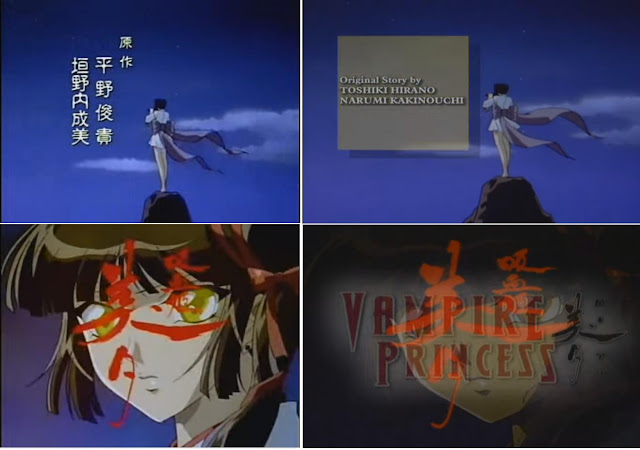 I'm still upset over the butchering done to the opening to Vampire Princess Miyu.  As if covering up the Japanese text wasn't bad enough, they somehow decided to go further by reducing the silhouettes of Shinma (Monster of the week) from twelve to four.  (Preferably choosing those who weren't covered by Japanese credits)

But another comparable sin is making Anime openings less diverse rather than faithful to the source material.  If you look at most Japanese openings, there are moments of contemplation, wistfulness and pondering in addition to general cheerfulness.   But all American Anime openings want to focus on is the action.  Changing the theme songs for merchandise-driven titles such as Pokemon and Digimon is understandable, since their targeted audience is young children, but changing openings for Anime with an older audience is somewhat insulting.

An example would be Grappler Baki, the most over-the-top fighting Manga (that's STILL ongoing after the "climatic" rematch with his father).  For some reason, the Funimation opening decided not to show the majority of the original, relying instead on clips from various episodes, and left out the sensual images of Baki's mother, in a series that mainly focuses on manly men beating each other up.  The Yasha ape gets more attention than she does.
Then, shortly after her face fades out, there's quick succession shots of a lone rose lying on the ground, a foot crushing it, and a close-up of Yujiro Hanma's sneering face.

This doesn't mean much for a new viewer who's just getting their feet wet, but this imagery doesn't become clear until SPOILER ALERT! Yujiro kills Baki's mother from saving her son from his father's wrath.
When the episode finally plays itself out, there's a growing sense of comprehension of what the subtle imagery was trying to convey.  Once the painful connection is made, the reason for her showing up suddenly makes sense. 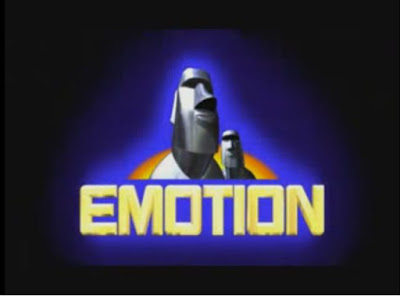 Of course, that's just an overt example of what's eventually shown.  Not all shows are privy to that, and the failed attempt at Science Fiction,   Lost Universe certainly comes to mind.  Hajime Kanzaka had success with his humourous Fantasy series, Slayers, but Lost Universe was plagued with production problems from the start.  Several early episodes were lost in a fire, resulting in rushed production jobs to play catch-up, and resulted the infamous Beach episode, which still connotes negative comparisons today.  The lack of advance time could explain why the original opening included the appearance of two individualistic villains near the end, who wind up being less than important, and amounted to little more than cameo appearances. 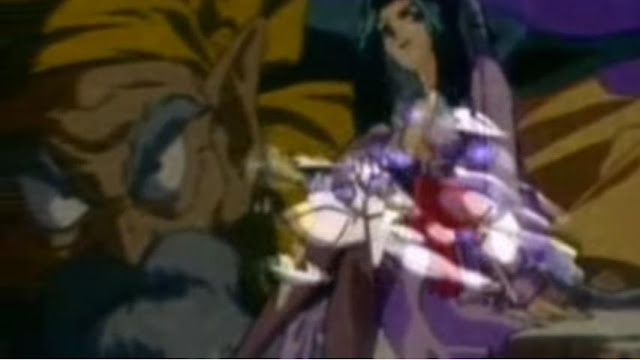 Excluding two bit players could be understandable, as not to delude audiences of dashed expectations, but there were other contrarian instances that were more interesting.  Throughout the opening, shortly after seeing Chibi ornament plushies, we're treated to various items: a Sewing machine, a locket, a cherry blossom tree in front of a house, the sewing machine again, then various pictures of what's likely the protagonist being hugged by his mother.  These are very personal objects not suited for interplanetary travel. 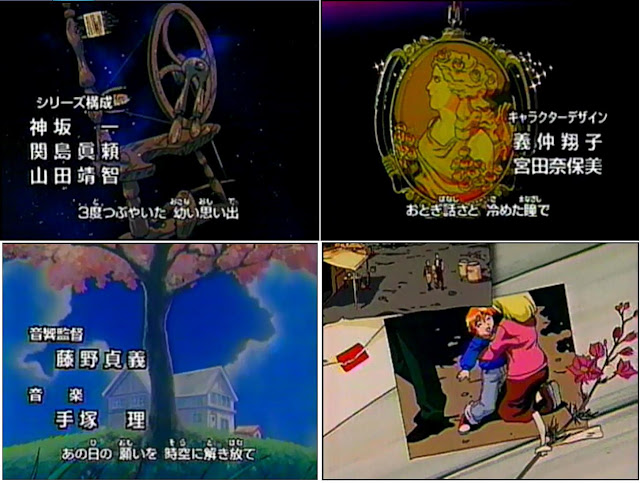 Most likely, there was going to be an alluded longing for childhood and his home, but that was never apparent in the narrative, which opted instead, for typical space exploration and group shenanigans.  However, even if they'd opted for going the emotionally honest route, Lost Universe wouldn't have worked anyways.  The humour was mostly flat, and the ship's ditzy Holographic Maid couldn't possibly compare to Voyager's more charismatic Holographic Doctor.

I'm sure there've been other Anime openings with symbolism in them, but I'm not aware of other titles that've been roughly edited as these two.  Having these scenes removed by dumbing down the material ruins the subtext somewhat.  Not having everything spelled out and explained is what makes the alluded background interesting.

*Another complaint I have is when certain series are brought over to DVD, they don't bother to label the lyrics to the songs (unless they're close-captioned) leaving me wondering what I'm missing out on.  Apart from Weird Al's Patterns for the Edutainment Math show Square One TV, I've never experienced the enjoyment of understanding a Weird Al song, save maybe the lines to Jurassic Park, which was present in an issue of MAD.  Sure, I could look up the lyrics online, but have you ever tried to match lyrics to a song sight unseen?  Chances are, the tempo and rhythm would be totally different from what you'd expect.**

**Oh, and another thing, to further add insult to injury, Foreign languages will also be transcribed as "Speaking French/Italian/Spanish/Russian/Japanese" without giving me any clue to the words being said.  I know I wouldn't be able to understand it, but I'd still like a transcript, since I could make out the general gist from words here and there.
Posted by DeBT at 8:10 PM