What is the Form of a Question?

This Monday, viewers were treated to a rare feat on Jeopardy!  By sheer chance, every single contestant decided to wager everything they'd won onto the Final Jeopardy! question... only for all three to lose their savings in one fell swoop.  This kind of occurrence has only happened six times during Jeopardy!'s 50+ year run.  At least it didn't happen during a Tournament of Champions.

An actual 3-way Tournament of Champions tie would be an incredible upset, resulting in audience outrage.  Not long ago last year, we were treated to the exploits of a rather remarkable achievements of a young paralegal who came out of nowhere to dominate the Jeopardy! board.  Online reaction was mixed, being amazed and appalled at Matt Jackson's autistic-like ability to perfectly time his answers as soon as Alex Trebek confirmed they were right.  Those haters weren't looking forward to having another contestant who'd keep staying on the game for what looked like months on end. 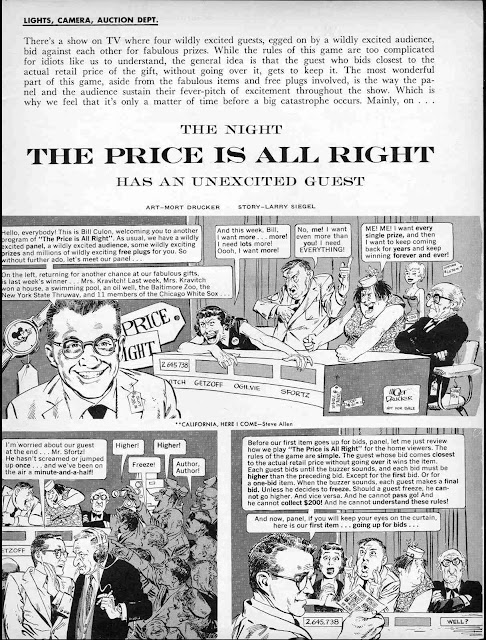 They reminded me (naturally!) of an early MAD satire of a gameshow starring a contestant who was rather unpopular, despite his impressive ability of accurately making rapid-fire predictions down to the decimal point.  In between rounds, we found out some interesting trivia about Matt Jackson, including the fact that he had a Jewish mother and a Christian father, as well as a twin brother.

During Matt Jackson's run, Alex Trebek mentioned that previous champions were hoping that he'd keep up his winning streak, since they were terrified of having to face up against him for the Tournament of Champions. 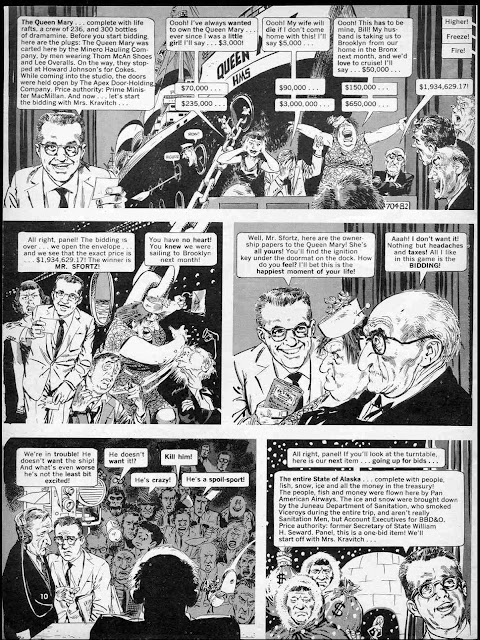 In one particular Daily Double (Oct. 7), Matt Jackson bet the sum of "Five" in a Music category. (WHY he kept persisting in a category he was having trouble with is a mystery)  After making the wager, Alex said "$5000?  Alright then, here's the clue..." to which Matt Jackson got wrong, but a measly $5 was deducted from his score, which was a major factor, because it was still a close game; and Matt Jackson lived to play for another day.

As it turned out, the latest contender for breaking Ken Jennings' 74-day record ended after a mere 13 days, losing to Michael Baker after being overconfident in betting in Final Jeopardy!, but then it was a very close game, having just a $200 advantage over his closest competitor.  Michael Baker seemed like a worthy replacement... only to wind up losing the very next day. 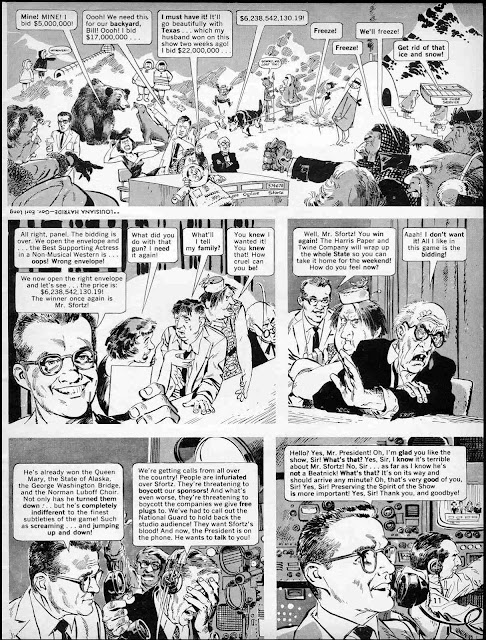 When shown in the Tournament of Champions, Matt Jackson's introduction, whose trademark of opening with raised fingers of his running streak, and a creepy unwavering timed smile was inverted by opening up with a smile that tapered down to a disappointed smile.  That reversal could've been considered prophetic, considering how disappointing Matt Jackson's results were.

In the semi-finals, he continued his usual pattern of racking up maddening numbers of moolah, easily outpacing the other opponents.  But then he fell apart after reaching the 2-day final rounds.  His strategy of quickly pressing the buzzer and choosing the mid-number categories to get the Daily Doubles faster only works if he's the only one implementing that strategy.  His contender, Alex Jacob, who copied that tactic to great effect left Matt Jackson constantly playing catch-up.  Losing valuable money on wrong Daily Double answers didn't help Matt either, and by the end of the first Final Jeopardy!, he'd lost most of the money he'd made, despite impressively keeping pace once he finally got his rhythm going. 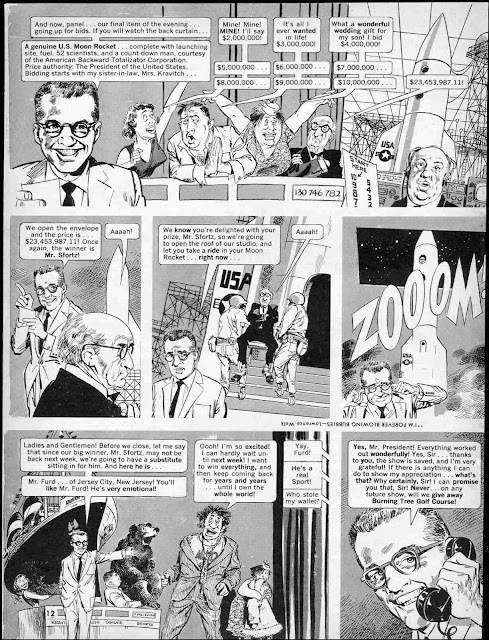 Also, in deference to Matt Jackson's line of rapid-fire answering, Alex Jacob used the counter-intuitive method on every Daily Double by taking his sweet time giving an answer, looking constantly worried, then popping a question... which would turn out to be right every time.  The man certainly knew how to play his audience.

As it turns out, answering Jeopardy! questions isn't as easy as it looks.  In addition to being prepared, there's the overhead studio lights and mounting pressure to keep up the pace, even when you win multiple games in a row.  Eventually, that strain begins to build over your head until you crack.
Posted by DeBT at 10:50 PM