You notice all kinds of weird things while browsing old online newspaper archives.  For starters, due to rushing the scanning process and lack of double-checking the source material, some pages are accidentally posted twice.  And other gap in the dates are filled in previous dates that run together that were never divided.  For instance, you can look up an article in say, November 28, 1985, and find a paper wasn't available that day, because they were celebrating Thanksgiving, thus yesterday's date would double-up on their features which would compensate for the lack of a paper the following day.

But this wasn't just regulated to national holidays - it happened sporadically.  There are wide swatches of missing patches scattered here and there, which makes finding archived quality comics a nightmare for anyone who didn't bother to keep a subscription to every published newspaper ever.

And then, there are the scanning errors. 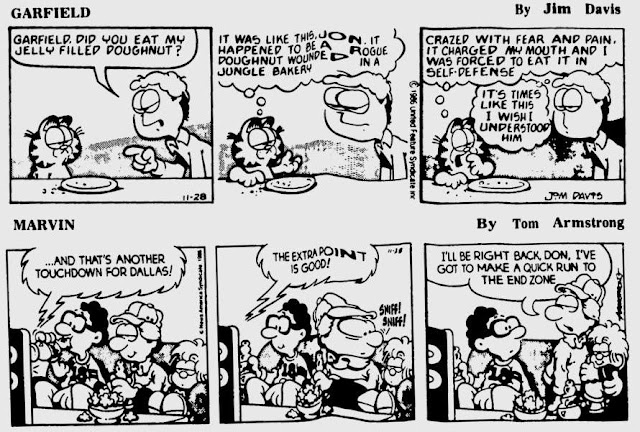 This probably isn't how it originally appeared in the pages, but I like how Jeff's (the father) face is distorted in the second panel, because it looks like he's in one of those non-twinning in-between frames from multiple hand-drawn animated cartoons.  (Something that 3D animation has yet to perfect)

Another feature is that some newspaper comics used to have advertising of available book collections of the most popular strips in the margins.  Nowadays, you're more likely to see that kind of self-promotion in the cover header of the latest scanlated issue.  (which explains the wide empty spaces at the beginning and end of every chapter) 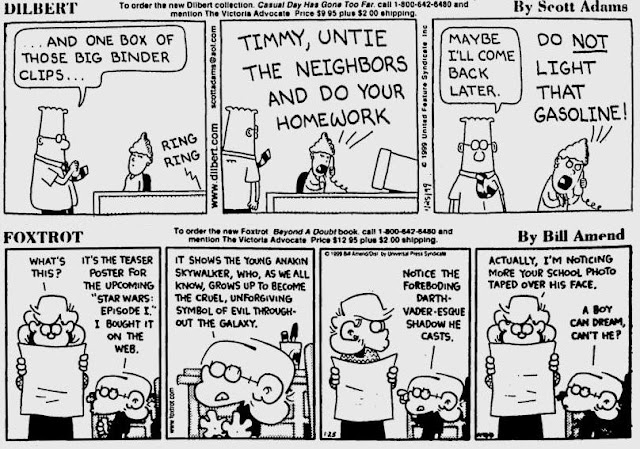 With the majority of newspaper comic content being readily available online, there isn't much impetus to seek out other comics for their low-impact humour since audiences are more likely to stick with the material they're most familiar with.  Having a singular page showing one strip at a time isn't close enough to the newspaper comic model.  The closest equivalent would be one large page that'd show every single comic that'd appear on that day.  Such a model would be an assault on their bandwidth, but it'd give audiences a wider range of samples to draw from.
One feature that's been largely eliminated is the prospect of missing or absent comics.  For the most part, these were hand-waved away by dint of being unsuitable or controversial enough for the family content of a newspaper.  (Whose rationale for attracting reader numbers is the motto "If it Bleeds, it Leads")
These strips would usually be replaced by other comics or older material.  (Pogo was notorious for having Bunny strips for its impenetrable political comics)  Considering their disposable nature, and that today's cartoonists are required to take mandatory vacations, it's surprising that other cartoonists didn't get the chance to jump in and try to substitute as a guest strip for a trial period.  Then again, some comics are so popular with certain newspaper subscribers that they're usually the only reason they bother to stay on, so removing them (even temporarily) is a risky prospect.  Calvin & Hobbes spent almost 2 years on sabbatical, but remained endearing, so there's 7 1/2 years of material within its 10-year run.

Nowadays, if there's a comic that's been banned from the pages for one reason or another (recall Opus' Burqa issue), it's just a matter of a quick search result to find the offending material, and wonder what the fuss was all about.  (Unless you're on a limited-information dictatorship plan)  But back then, there was another kind of self-censorship that had nothing to do with imposing values.  I'm referring to the most dreaded quote of debt collectors and editorial feedback: "Your submission got lost in the mail." 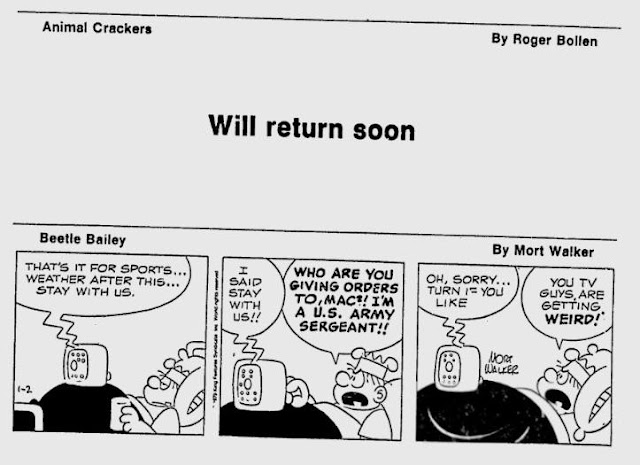 Back then, cartoons were shipped forward and back via a shipping process that for one reason or another, wasn't entirely reliable.  Such a method using snail mail would be considered unthinkable today.  Even more unusual would be if multiple comics happened to be "lost" along the way. 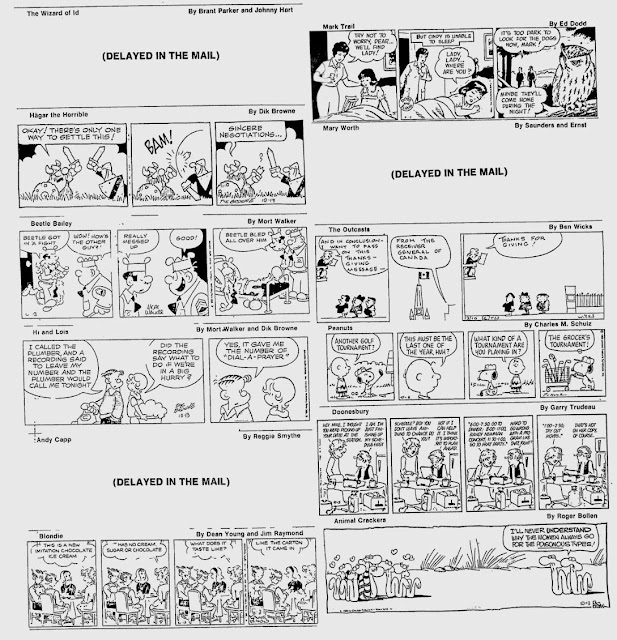 Normally under unusual circumstances, missing or mangled comics would get a correction with a proper image on the second page the next day.  But I can assure you that no such compensation was given for these comics.  Not that much would've been missed with these particular strips, but still, having 1/5th of your intended reading material cut off without any backup is kind of an insult.  Fortunately, as far as I can tell, this kind of thing didn't happen often.  Of course, that's only judging from the available online stuff.  The online archives for other papers which require a paying subscription to access their contents is still out of my reach.  I have no intention of giving away good money without sampling the wares.  (i.e., what comics those newspapers have) 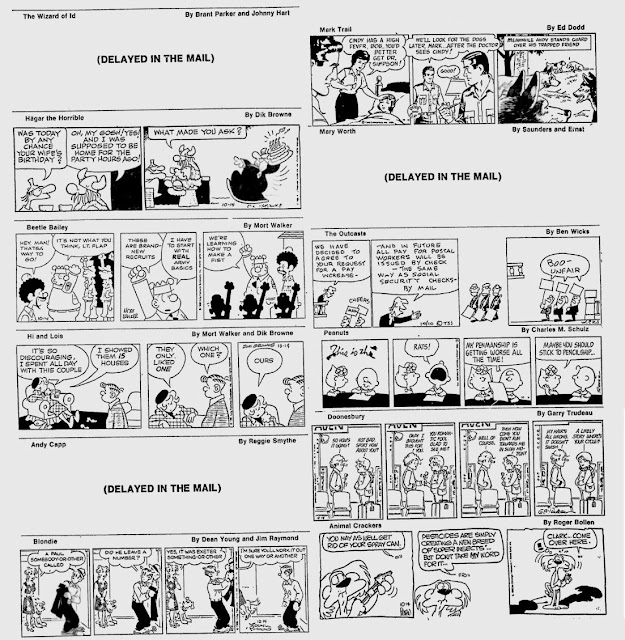