In an interesting moment of synchronicity, both of today's Doonesbury and For Better or for Worse reruns had the same theme as the Thanksgiving Famine tribute that occurred on November 28, 1985.  However, looking closely, there's a significant difference - the Doonesbury one is one year earlier than the FbofW one.

After doing some further research, it seems that the Africa tribute was such a hit that cartoonists decided to do it again for next year.  However, that's where this tradition ended.

This is part of a "lost" series of Doonesbury strips where Honey busted Duke out of jail.  Its a shame they weren't collected, since as with anything involving Duke, they're pretty funny.

As before, I'll start off with the better known strips, and save the more cringe-worthy ones at the end. 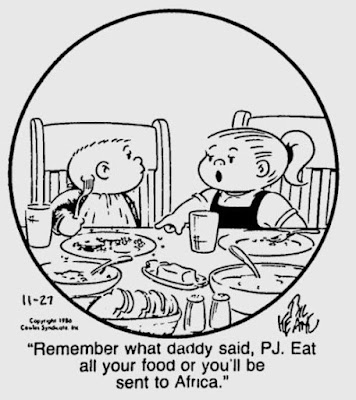 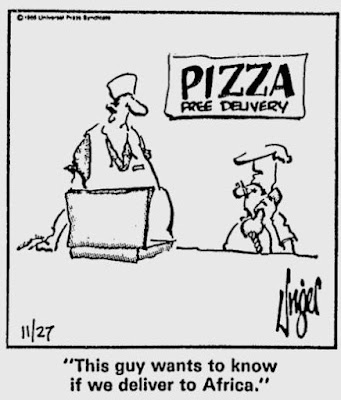 I'm aware that I posted this BC strip last time, but that's just to give some setup for the next one:

And here's the strip that showed up a year later:

When you consider the cast of Shoe being made up of birds (who are sometimes hunted for sport by rifle-toting dogs), you have to either equate the characters as being feathered humans or resorting to
cannibalism.  Either way, madness awaits for those trying to rationalize their customs.

Last time, I posited the possibility that Bill Watterson was dismayed that he wasn't able to contribute to the Famine last year, so he made up for it this year.  Here's an interesting editorial change to one of the balloons of this strip from the Edmonton Journal.

There are plenty of unknown Canadian comics that have very little commercial appeal outside its home country, and Ben Wick's Outcasts is among them.  A lot of the jokes were political, the drawings were of lower quality than Quentin Blake's and much of the humour was centered between an elderly couple with deep jowls that made them look like bulldogs.  Oftentimes while making a particularly lousy joke, one or the other seniors would reply in raucous laughter.  It's dubious an Outcasts collection would even manage to find an audience today. 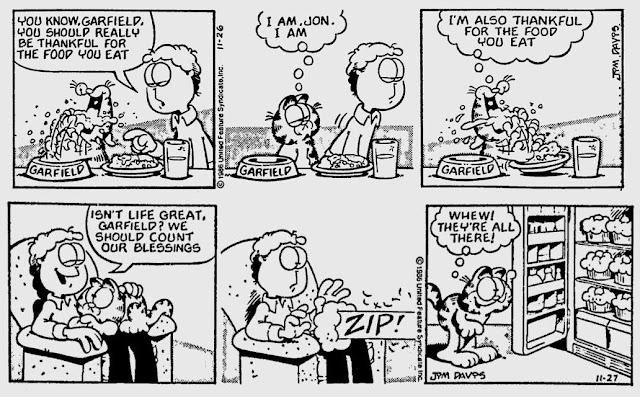 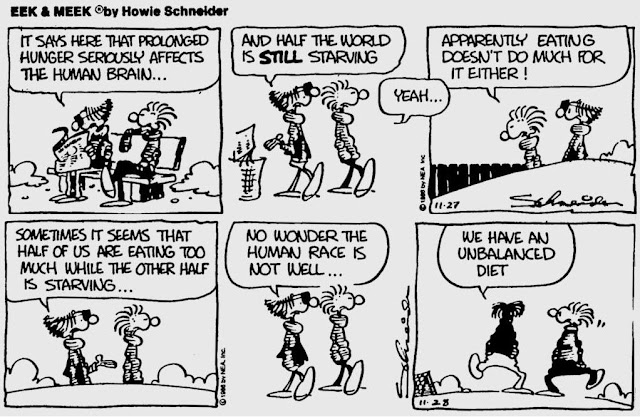 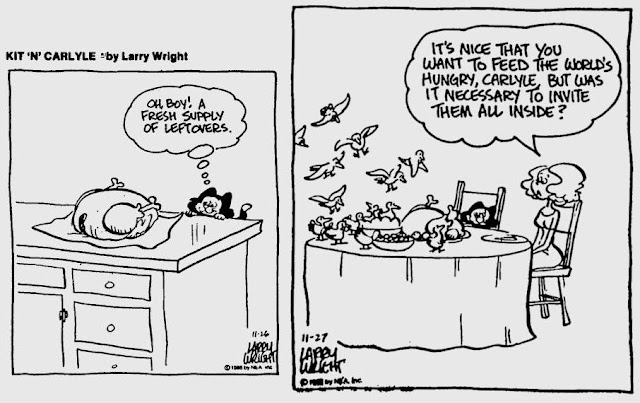 In any other context, this Broom Hilda strip would make it seem like the witch was going from house-to-house to extort random people out of their turkey dinners.  It would be totally in-character for her to do something like that.

This isn't a continuation of the last strip - the above was from last year, and the strip below showed a year later.

Some comic strip jerks were less cordial about helping the less fortunate, and tended to miss the point. 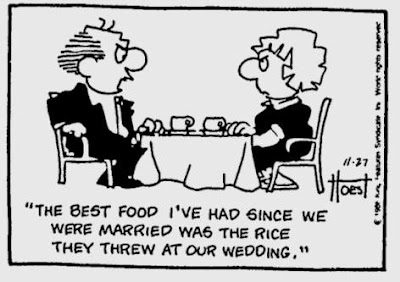 Other comics were a little more preachy in their message. 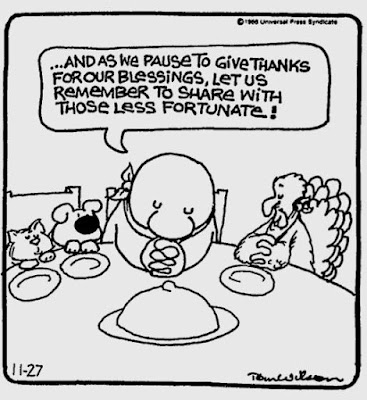 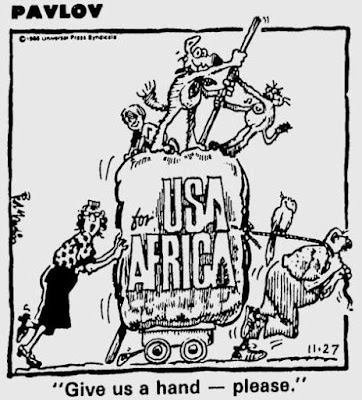 It's hard to tell, but I think Arnold's got the whole turkey stuck in his throat in the last panel.

The worst part about Looney Tunes newspaper comics is how much of Bugs Bunny's wisecracks come less from his mental dexterity manipulation of his enemies, and more from lucking his way out of circumstances. 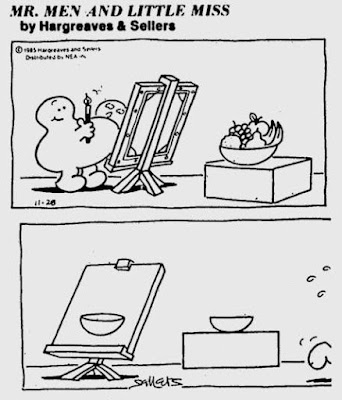 Yes, there was a Mr. Men (and little Miss) comic strip.  Should you be surprised at this point? 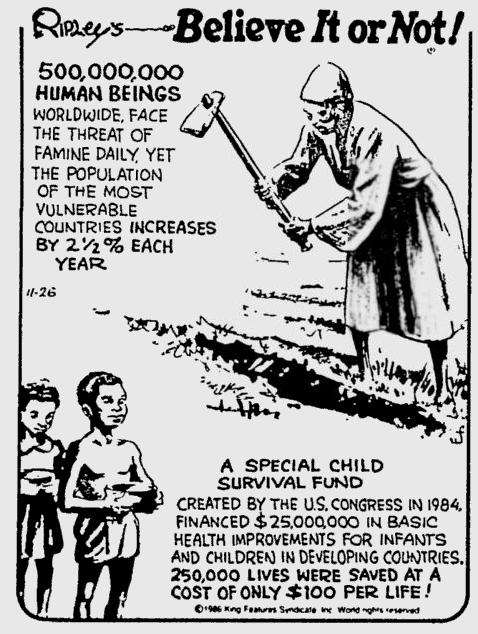 This Ripley's Believe it or Not! actually appeared a day earlier, but I'm posting it here for relevance.

I actually passed this one several times over, since it didn't have the title characters, it dealt with robots and didn't have a central Thanksgiving theme. That was until I noticed that the robot was actually giving excess abundance of energy over to a disheveled deprived robot.  Some tributes aren't so easy to recognize upon first sight.

As with last year, the serious serials handled their reality issue with as much subtlety as space demanded.

Others just had the tagline of "Hands Across America" in their strips.

As warned, here's the worst saved for last.  In addition, here's some more comics I found that I missed last year. 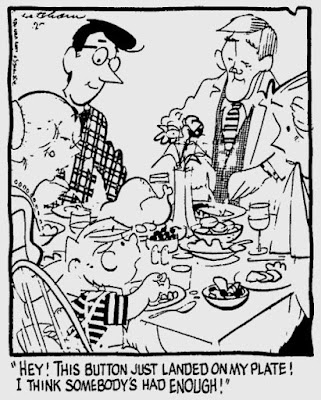 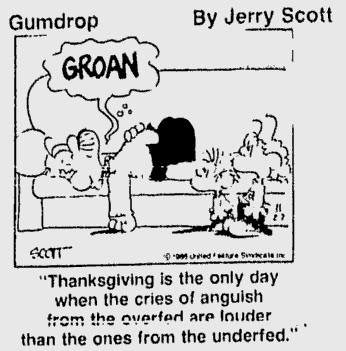 And now that you've made it to the end, surely you know the meaning of suffering too.
Posted by DeBT at 8:52 PM