Every November around this time of year, I pay tribute to what's generally accepted as being the best World War I comic, Charley's War.  Trouble is, it gets harder and harder to say the same thing all the time.  "This comic's really great!  you should read it!"  There's only so many times you can heavily recommend a singular thematic comic before potentially interested parties become turned off at your enthusiasm.  This year, I figured I might as well put a spotlight to other comics that have their focus on The Great War. 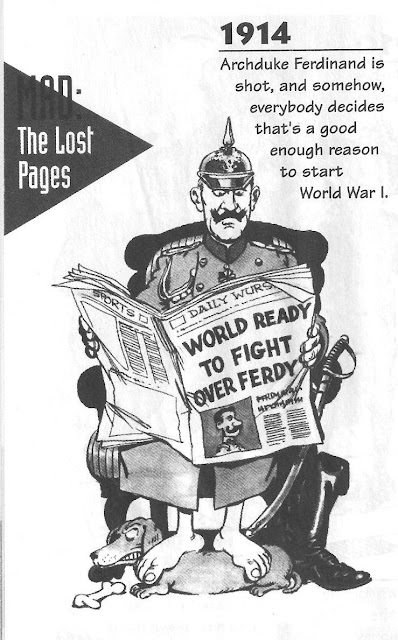 The first book is the most direct with its title, Terrorist:  Gavrilo Princip, the Assassin who Ignited World War I.  We know that the trigger for WWI was the assassination of Archduke Franz Ferdinand, but surprisingly not much about the man who did the killing that had similar world-shaking implications as Lee Harvey Oswald.  If you've ever wondered about what the man's internal thoughts were that spurred him to such an action, then this book's for you.  Especially since as a prelude, there's several historical similarities still relevant today. 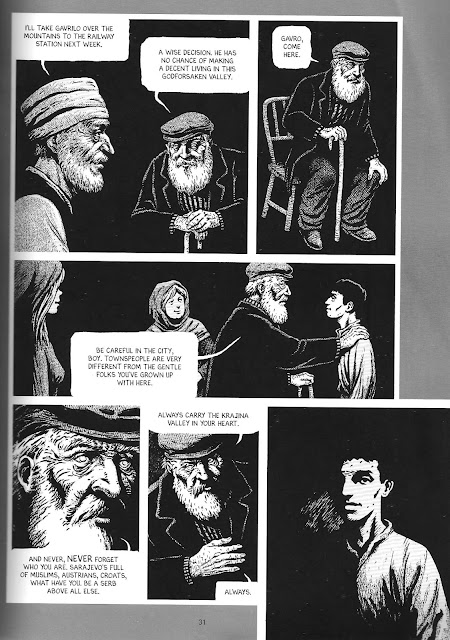 In TGPtAwIWWI, we find that Gavrilo was a Bosnian Serb who was a school dropout with great pride in his heritage.  He tried to apply for the army to fight for a war on Turkey (the Turks) but was turned down due to his persistent cough.  Feeling discontent, he fell in with a crowd of radicalized anarchists who wanted to overthrow the crown.  Any of this sound familiar? 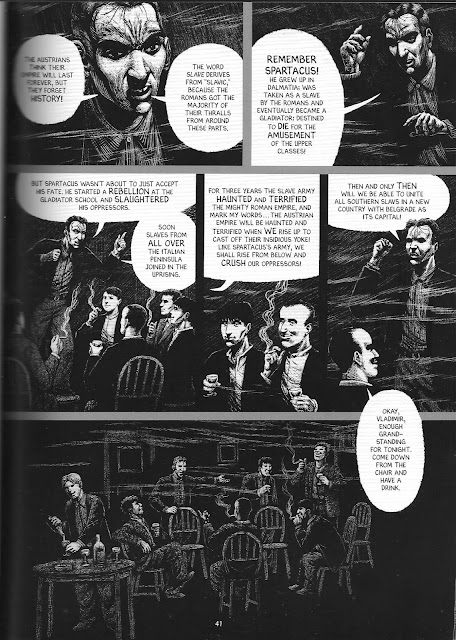 There's information not only on the killer, but an occasional spotlight on political background dealings in trying to deal with the rather aloof mindset of the Emperor, who's more concerned over his trivial affairs than international politics.  Somewhat shades of Mrs. Simpson and the King. 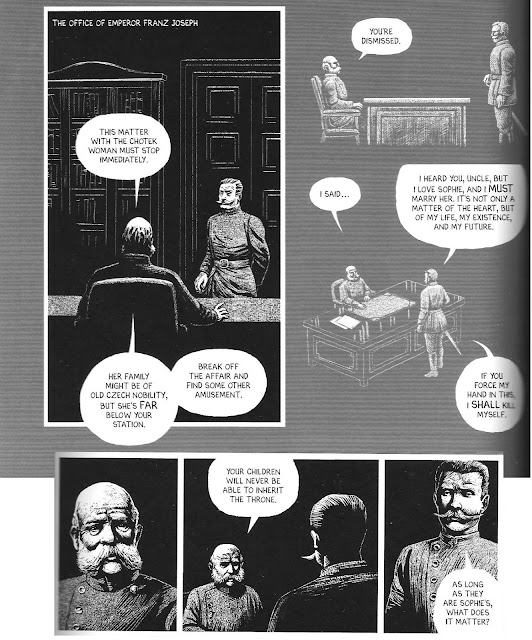 To amp up the tension of the inevitable, the government secret service is ordered to halt the assassination, despite instigating it, since the country's condition was delicate and still recuperating after two wars.  You heard right - they were stirring up their own populace in order to spur on future profitable conflicts.  You can see how well that plan worked out for them.

When you're surrounded by death and destruction and unreasonable chains of command, for some reason, it spurs the creative juices something awful.  Above the Dreamless Dead is an anthology of WWI Poetry drawn by various British artists. 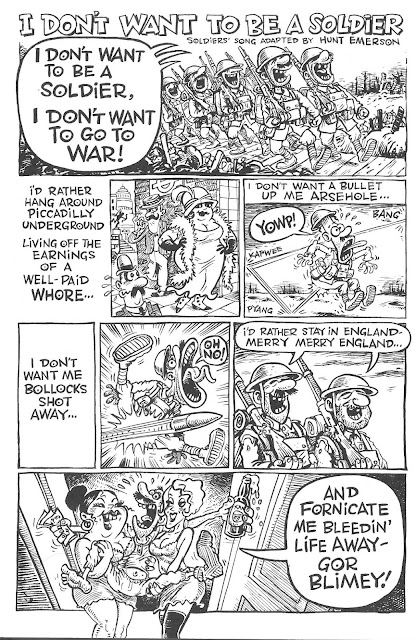 While the most amusing (and rude) ones are by Hunt Emerson, the majority of the book is of somber ruined battlefields and wounded (physically & mentally) soldiers.  As such, it's something of an acquired taste, and may not be for everyone. 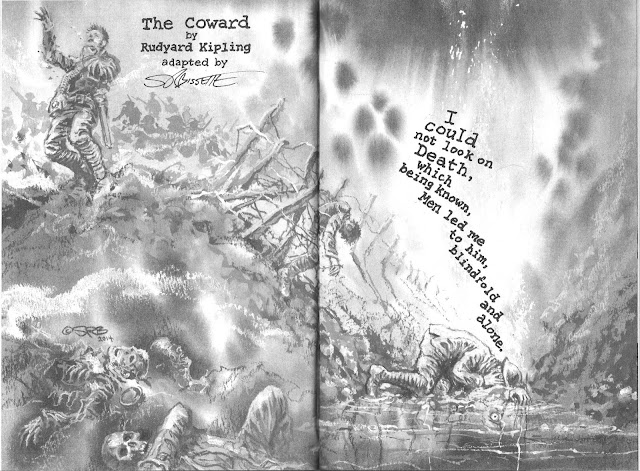 Last year, I mentioned The Black Battalion, a group of Blacks who fought in the War, but there was another regiment of that's almost been lost to history - The Harlem Hellfighters.  Written by Max Brooks, best known for World War Z and The Zombie Survival Guide, he did meticulous research from the scant few available articles that bothered to mention them.  After failing to attract any prospective Hollywood directors (including Spike Lee!) who were interested, but didn't want to invest into a heavily-Black cast with disturbing racial overtones, he eventually found a reasonable outlet in the form of comics.  Normally, failed Hollywood pitches turned into comics are little more than Die-Hard ripoffs, but this was something worth spreading to the masses. 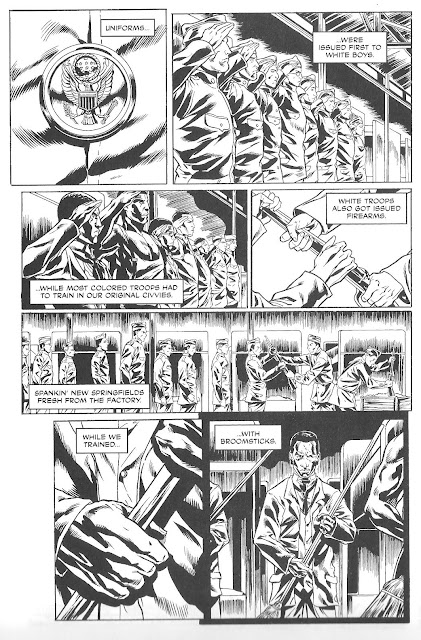 The Harlem Hellfighters chronicles the ugly history of the highly reputed Black regiment who fought in the trenches during the war.  But before they could reach the harsh conditions of the Front, they had to contend with the unfair conditions of back home where they were stymied at every turn including training, which necessitated no small amount of trickery in order to get the parts they needed. 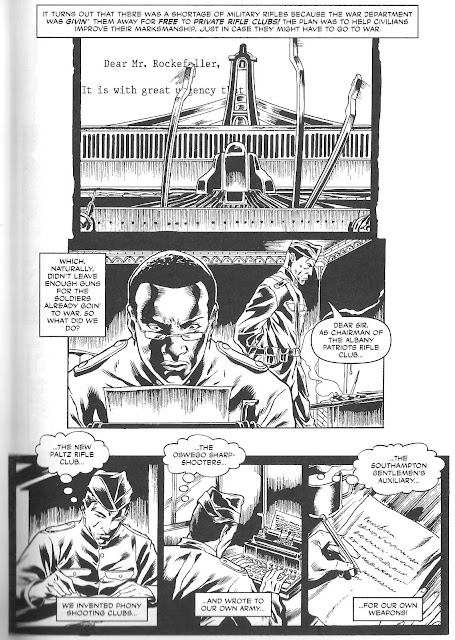 Hollywood puts plenty of stock in rooting for the underdog, and indeed, these men had to overcome overwhelming trials.  Being constantly harassed by the white public (and even Black labourers) for daring to think they were good enough to join the army.  Having to keep stiff upper lips during repeat burnings of mock effigies... with actual Blacks standing in for the effigies.  Furthermore, they couldn't exact any righteous vengeance, since reprisal on their part meant that they would be disbarred from entering the War.  The whole humiliating experience was aimed at a race who were never intended to succeed in the first place, fighting for a country that didn't want them.  Ironically enough, while they were welcomed as an assistance in the Western Front, the top brass (from America) decreed new orders for the battalions not to socialize with their allies, lest they become "too accustomed to being accepted as an equal".  Fine way to treat Black soldiers who joined up for "a chance to shoot white men".

...that probably didn't come out the way I intended. 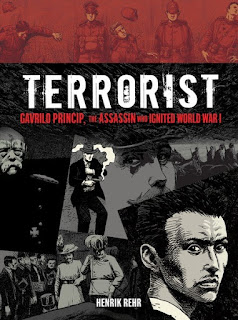 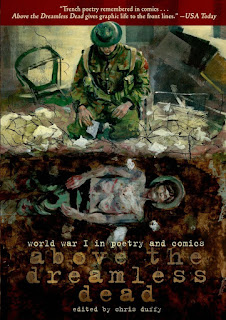 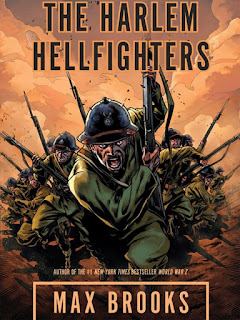