Everybody who's read Sunday Comics pretty much knows about the concept of throwaway panels, usually occupying the abovehead space of the strip, right next to the title page.  However, there's another aspect of throwaway panels that is much less known - the panels right next to the comic.  This is something somewhat different from the title box that would show alongside the strip for the rare newspapers that would bother to show this extra expanse of space.

One of the earliest examples I could find was Ponytail by Lee Holley, a former assistant to Hank Ketcham of Dennis the Menace fame.  As such, it holds a certain kind of nostalgia in certain comic circles.

As you can tell from the samples, Ponytail shows the exploits of a boy-crazy teenage girl before worthy competition replaced the demand for fluff entertainment aimed at girls.  When the King Features Syndicate editor notified the creator of the lack of demand for his product, Lee Holley quietly retired in 1989, being content with the run he'd done. 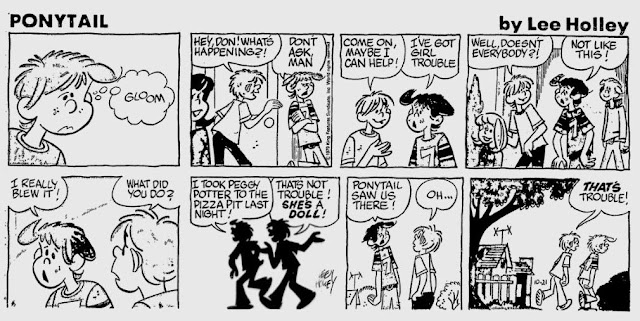 Finding the extra panels is quite easy - you'll notice that the panels on the far left are of larger and squarer consistency compared to the rest of the comic, which have a more varied selection of restricted dimensions.

Somewhere along the way, it was calculated that it would be far more productive if the rest of the Sunday strip was structured similarly to the throwaway panels, which would cut down time spent on structuring the joke.

What surprised me was how little the panels added to the overall experience, and how much they ruined the flow of a strip.  Most of them were little more than building up and reinforcing facts that were already evident.  In fact, one could remove the panels entirely, and be left with a better comic.

For your convenience, I've superimposed several Marvin comics with the missing panels, so you can judge the results for yourself.

Comic fans may complain about decompression when it's handled improperly; having a story that would've naturally been told in one issue be expanded into four-six issues, with events extended over the course of half a year.  When done well, decompression can build suspense, foreshadow future events, and have character development. When done badly, decompression winds up with expanded content that don't improve upon the material already present.

This could be a reason why there haven't been any excessive collections of Marvin - an extensive collection would show the obvious holes evident even as Tom Armstrong was improving his craft.

Even in later Sundays where taking advantage of the extra space was used, there were still instances where some panels could afford to be scrunched up or removed entirely per the newspaper's preferences.

The latest batch of Garfield strips have been condemned for being excessively lazy, with some strips having too much wasted space, and some minor alterations were done to improve them.  In fact, that premise was there practically from the start. 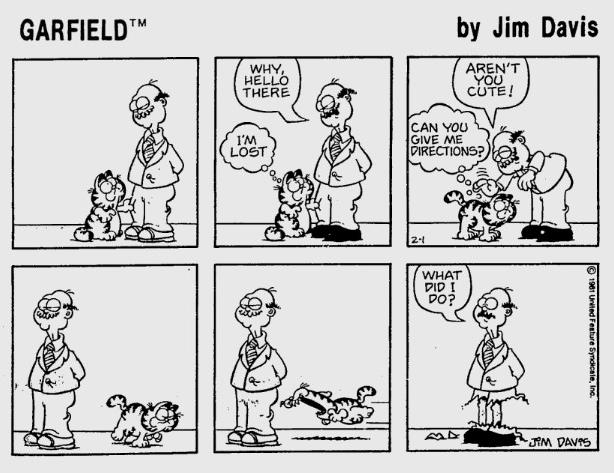 If you go back to the early Sunday strips, going from a typical 6-panel format, you'll be surprised at how well they still work if the 1st and 4th panels are removed.

And in the rare instances where those specific panels are essential, others can be substituted just as well.  Garfield's saving grace was that those extra panels were amusing enough to stand on their own.

What other comics out there work just fine without those extraneous panels?